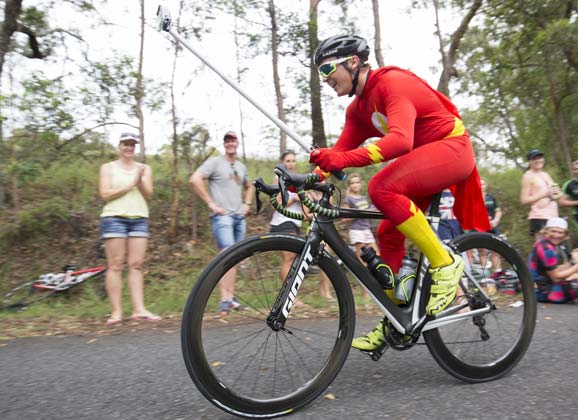 If you ride a bike in Brisbane, chances are you’ve been lured to the slopes of Mount Coot-tha. There’s a two kilometre stretch of road with an average gradient of nine percent… rising to 269 metres above the city. On Strava, this segment has been attempted over 179,000 times…

On Saturday 13 February 2016, this road turned into a race circuit with $10,000 in prize money on offer for the elite men’s and women’s categories. 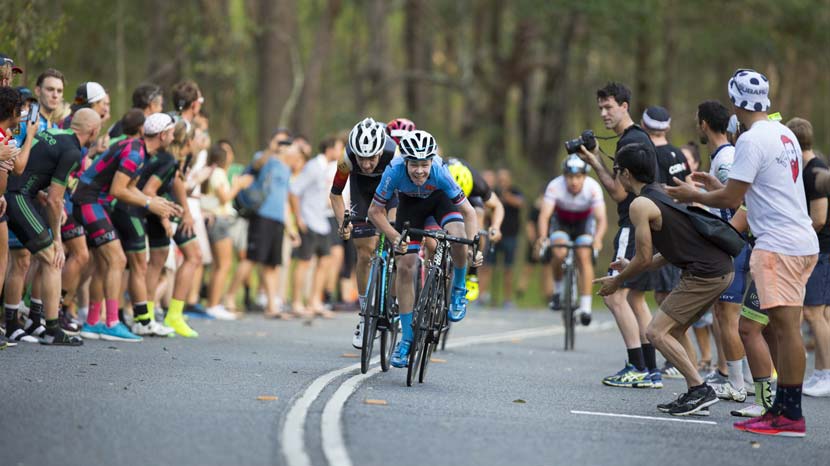 Although there were professional riders in the mix, the idea is a great one and similar competitions could become common place in towns and cities around the world.

In a week when there has been good discussion about how Cycling Australia should manage its National Road Series, the Coot-tha Burn reminds us that the first step to quality racing is bringing the sport to the people, making it fun, making it challenging, and making it possible for punters who ride these roads week in, week out to compare themselves with some of the best. 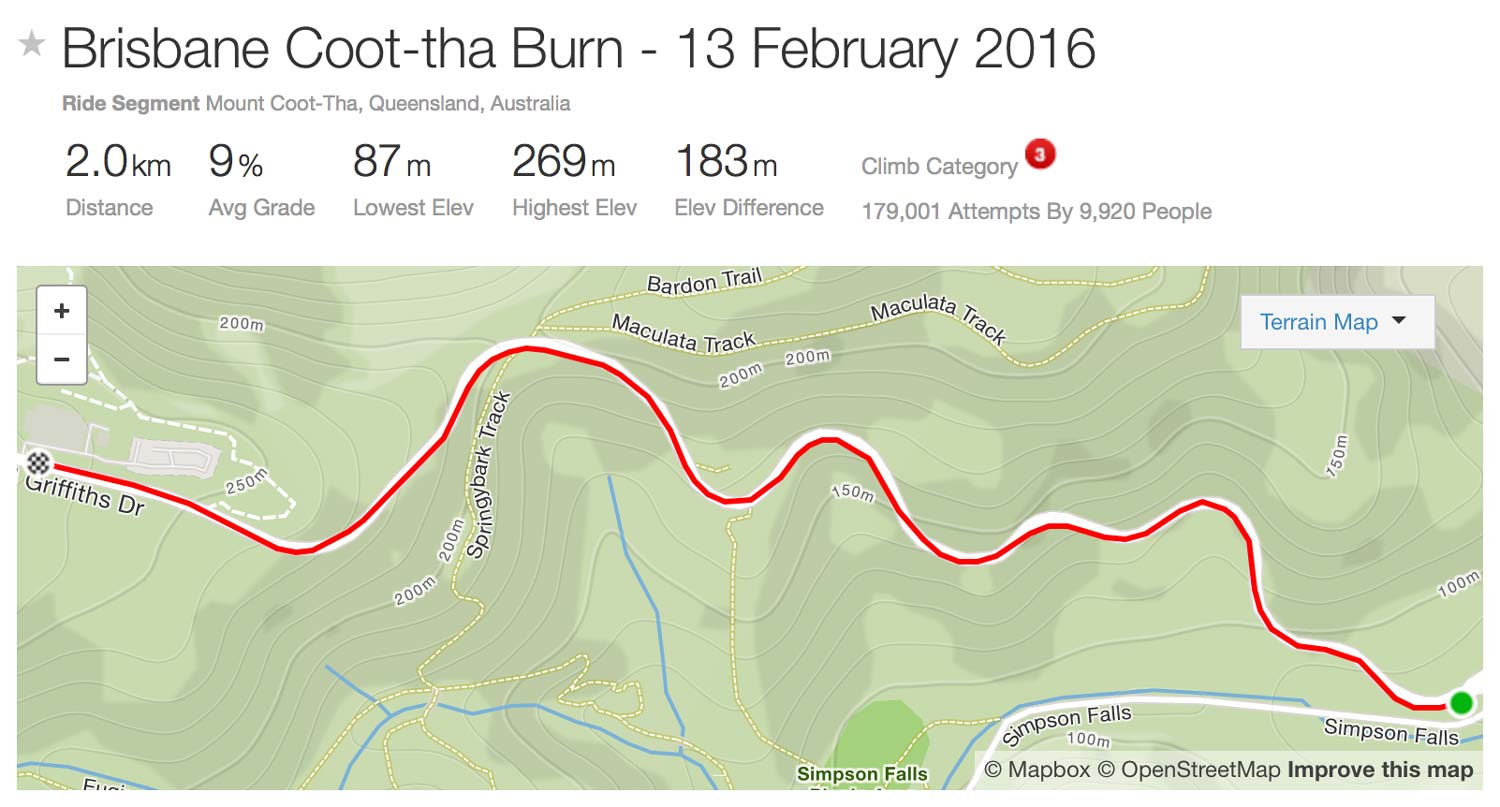 A total of 349 riders took on the challenge and the fastest time of the day went to Matthew Clark, 5:45! Congrats, $10,000 for you sir. He beat Sebastian Berwick by one second, with Lachlan Norris another second behind in third.

Clark’s time is four seconds off the best time on Strava which belongs to Ryan Thomas.

The Australian time trial champion, Katrin Garfoot, claimed the women’s classification with a time of 6:34.

The Strava QOM is Lucy Kennedy who was second on Saturday, 19 seconds behind Garfoot.

Below is an interview with Garfoot about the ride. She took up cycling only a few years ago and is now dreaming of Olympic glory in Rio. 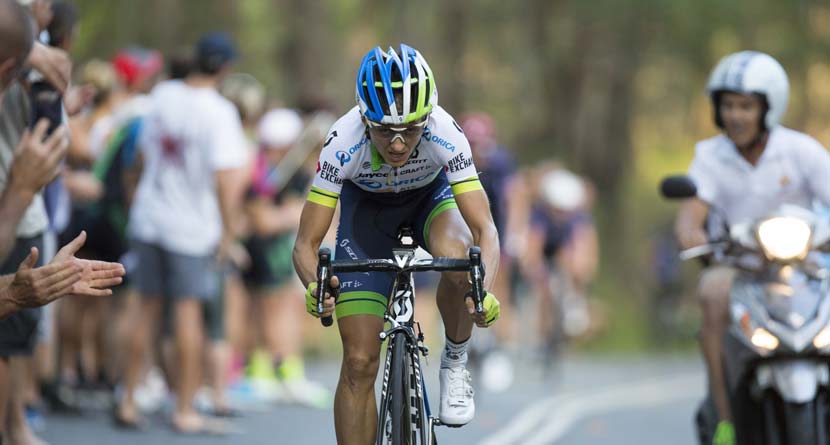 RIDE: I’m talking to Katrin Garfoot who won the Coot-tha Burn, a climbing challenge up Brisbane’s Mount Coot-tha. This is a different initiative. Was it a bit of fun for you?

Katrin Garfoot: “It was definitely fun. I felt like a race horse on the start – or what I thought a race horse would feel like. It was a short distance for a lot of money.”

It seemed like there was a good community atmosphere…

“Yeah there was a crowd there, unfortunately I couldn’t enjoy much of it because I was just too focused on being in ‘The Zone’. But towards the top there was a lot of noise.

“Afterwards, at the presentation, there were lots of people as well.”

“It is but all the lead-up and all the hard work of the last few years all runs into that moment of the race, I guess.”

You’ve won the national time trial championship. You understand big racing. What was this like in comparison?

“It was a big race because it was invite only so not everyone could just sign up for the pro event, so there were good girls to race against. I wish there was more, to make it a bit more difficult… or a bit more intense. But overall it’s not really comparable because it’s a very short race, more like a prologue event.

“I think the prize money changes the focus a bit more because $10,000 for us is a lot of money.

“That helps a lot so I guess there is a bit more pressure to actually get there at the end.”

Did you race with a power meter? And how were your numbers on the way up?

“I raced with a power meter and I was next to Lucy Kennedy (the eventual runner-up in the women’s category) going up the first kilometre and I thought she was putting a lot of pressure down.

“My numbers were around 320 watts, my numbers anyway. They are weight-dependent when you analyse them…

“At the top I had an average of 312 watts, which is not huge but over that amount of time it’s quite good.” 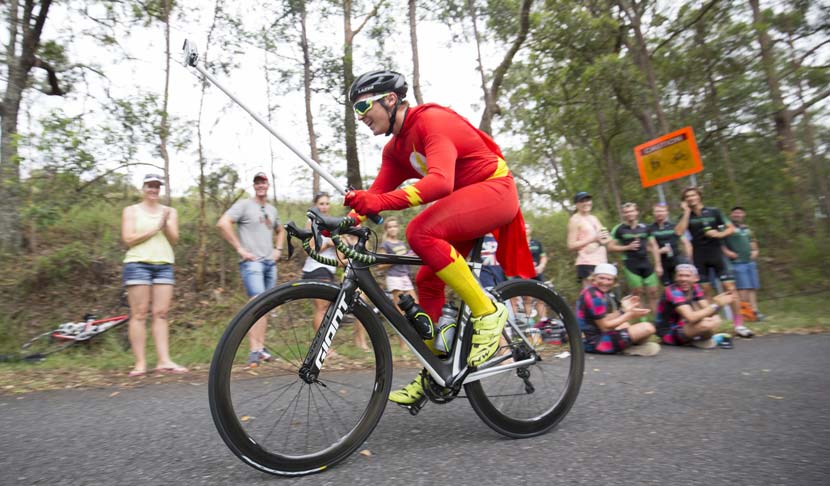 A lot of people in Brisbane know this climb. It’s pretty iconic up there. What gearing did you use? It might be of interest to other people if they go to ride it now – they can compare it with what you’re racing with.

“I remember that when I started riding that climb, it seemed way steeper for me than what it seems now…! I guess training made it easier to get up there.

“I think that the easier the gearing, the easier it is to start off.”

It is a ‘community event’ and you came to cycling almost by coincidence. Do you see a bit of yourself in some of the other competitors on the weekend?

“Oh definitely! I think this is what cycling is all about: giving it a go and if you turn out to be really good, why not keep going?

“I think that these events are quite a good idea to see who actually would have some talent and would be able to move on through the ranks.”

It’s a great initiative for cycling. You’ve had a big year already and there are a few exciting months ahead and I hope we see Katrin Garfoot on the podium come Rio. Is that a realistic expectation?

“Ah, hopefully. I can’t expect to do too much in the road race – I think I’ll only be in that for a short distance – because the time trial is two days after.

“If you want to be fresh in the time trial, you cannot really race the road race.

“You have to gamble, unfortunately.

“If it was the other way around, I could do both but at this stage I think I will only contend the time trial.” 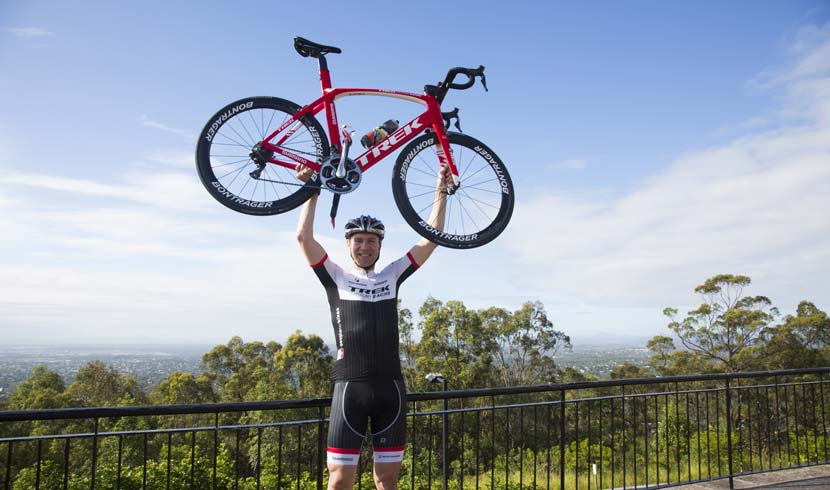 Jens Voigt was one of the many who were happy to make it to the top of Mt Coot-tha on Saturday.
Photo: Barry Alsop 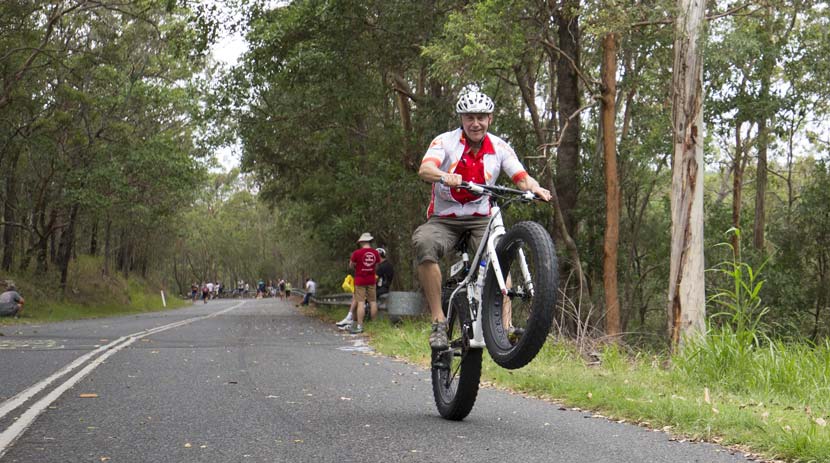 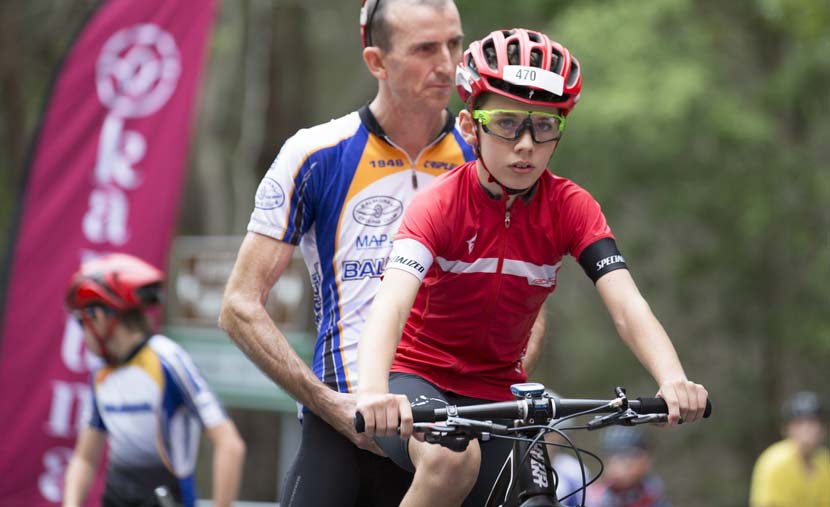 There were surely some champions of the future in the field…
Photo: Barry Alsop 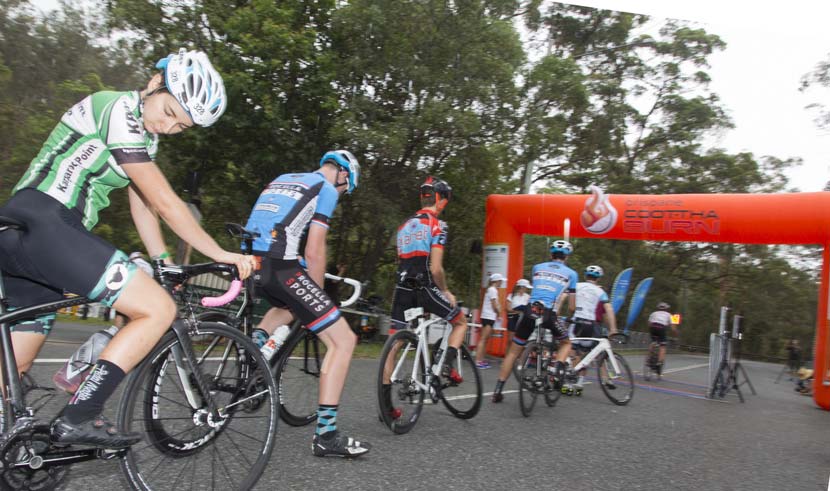 Waiting for the start of a 2km burst of power…
Photo: Barry Alsop