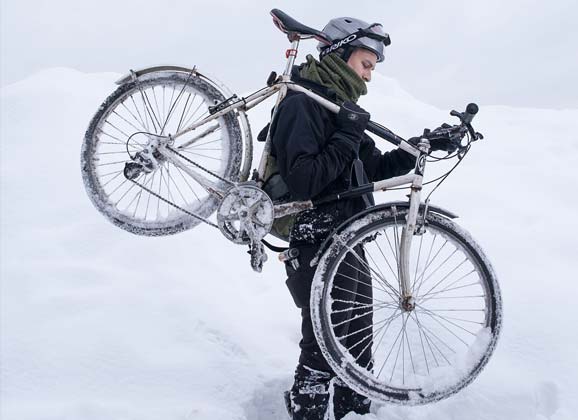 As we ride towards the end of an extended summer in Australia, cycling has been in the headlines around much of the country. Law changes in NSW has seen a wealth of commentary about cycling on social media. Some would have us believe that our streets are not the place for bikes or cyclists… others are adamant that there’s no better way to get around. Whatever your take on the matter is, one thing is clear: our climate is more conducive to cycling than elsewhere in the world.

Consider the plight of residents of Canada’s second biggest city, Montreal, where freezing conditions and deep snow offer a hindrance to cycling… and yet there’s a hardy group who insist that riding is part of the daily routine – no matter the season! 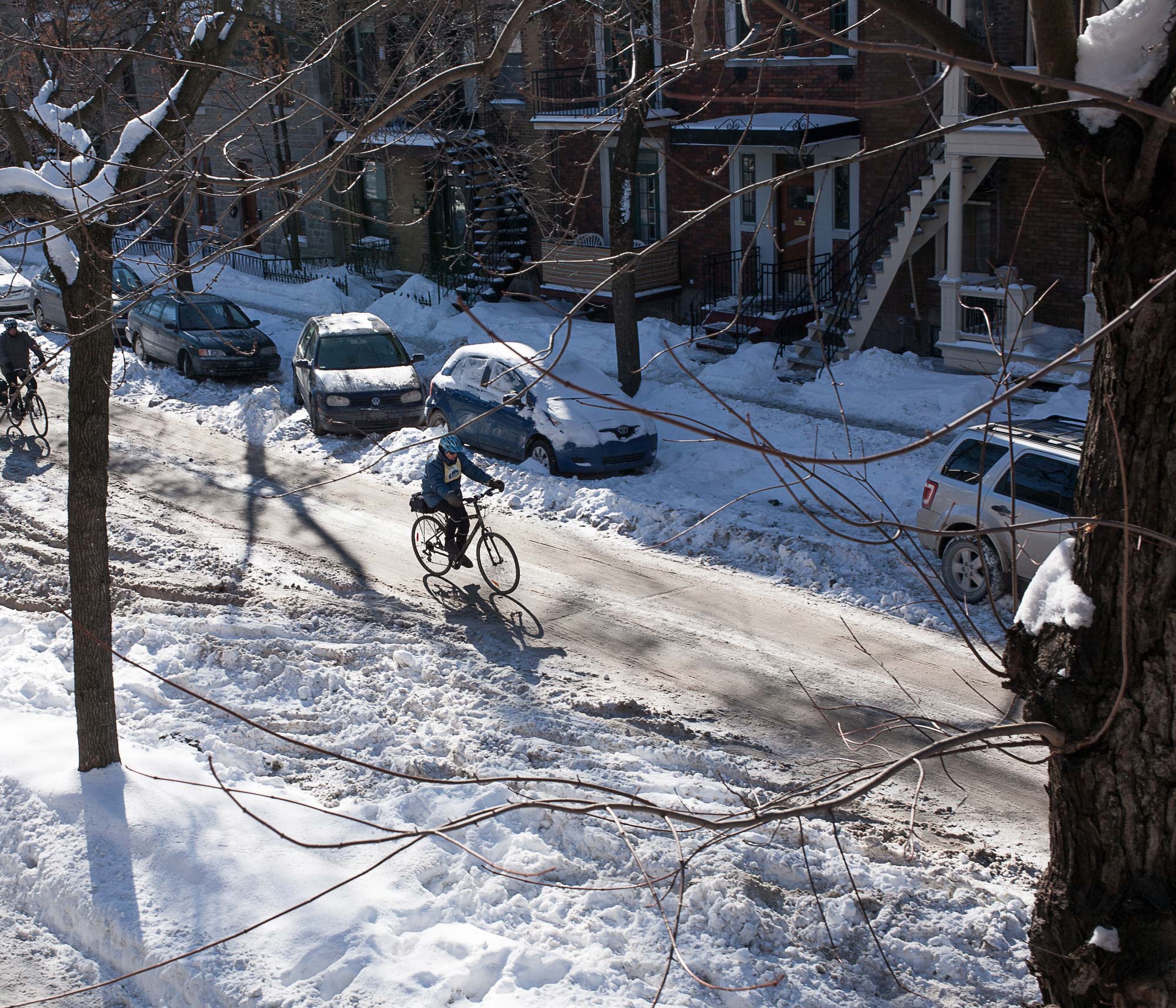 (-15 Celsius)
Clear sunny days are the coldest in Montreal: 500 winter cyclists showed up for the first “Ride under Zero” day for a 15km race on the bicycle paths of Montreal.

Along with Moscow and Sapporo, Montreal is one of the coldest and snowiest cities in the world with over one million inhabitants. Nevertheless, it’s the only one which finds its way into the top 20 of the most bicycle-friendly cities, according to the ‘Copenhagenize Index’.

During the winter, an estimated 15 percent of cyclists remain on their saddles, around 50,000 of them.

If, 10 years ago the winter cyclist could be considered as a freak (hurluberlu in French), the phenomenon is now far from being marginal.

These self-proclaimed ‘huluberlus’ may well be the first representatives of an urban population accepting its ‘winterity’. In other words, they have chosen to embrace winter rather than fight it.

“North is not so much about latitudes, as it is in attitudes,” said Louis-Edmond Hamelin, the famous Quebec linguist and geographer. Could accepting one’s ‘winterity’ be a first step towards accepting one’s identity?

‘Project Urluberlu’ aims at portraying this semi-nomadic winter population through a series of portraits inspired by ethnographer or anthropologists explorers discovering unknown tribes, in their natural environment, that is to say, huge piles of snow left over after a street has been cleared… 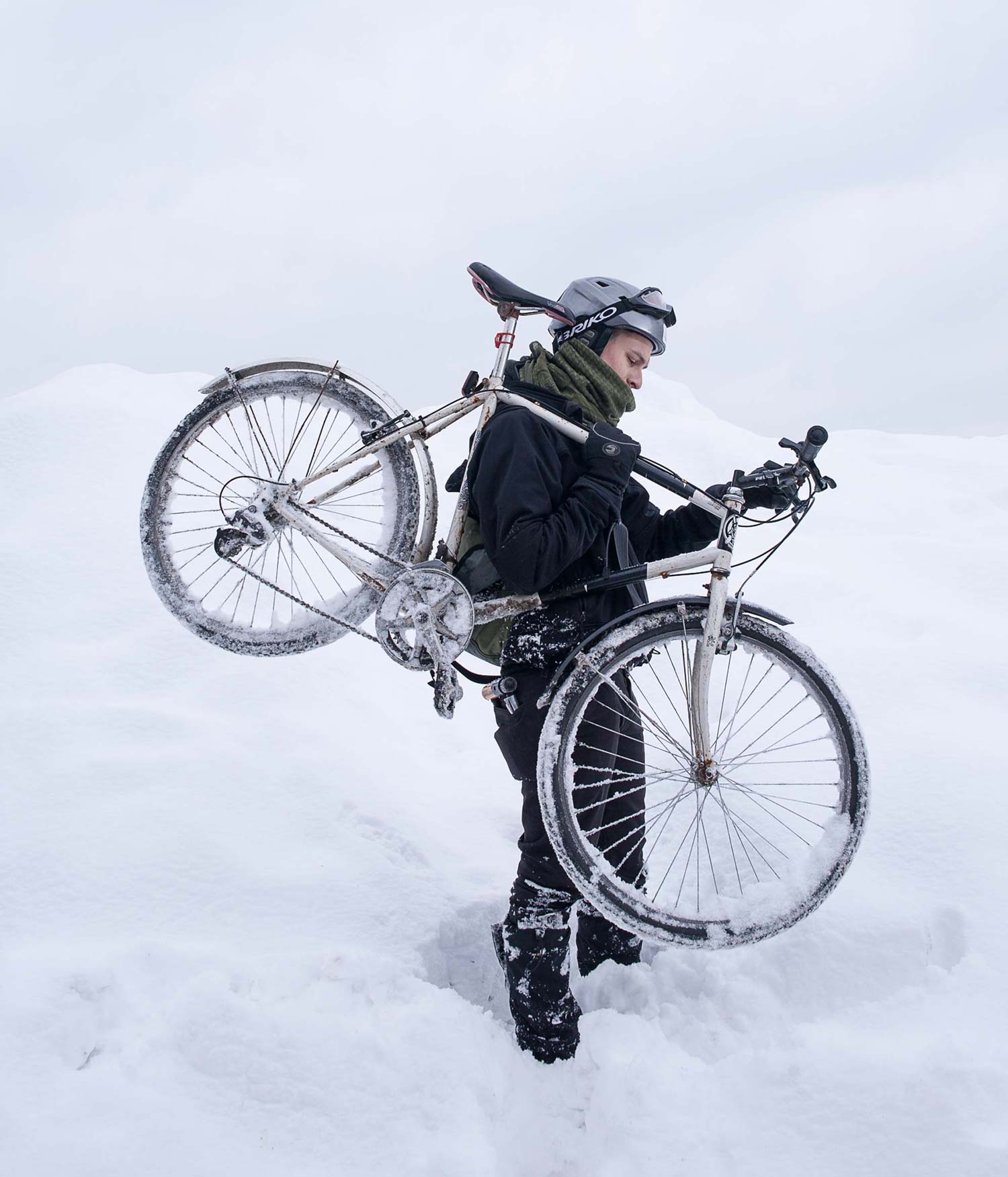 This is his sixth winter on a bicycle, photographed in Jean Talon (-3 Celsius). He sees bicycle as a fast and efficient means of transportation in winter. It’s also a good way not to freeze while walking or waiting for a bus, even though relationships with drivers are not always easy.

“One day, a man got out of his car and shoved me on the side of the road, only because I told him to look in the rearview mirror.”

He advises not to confront drivers… 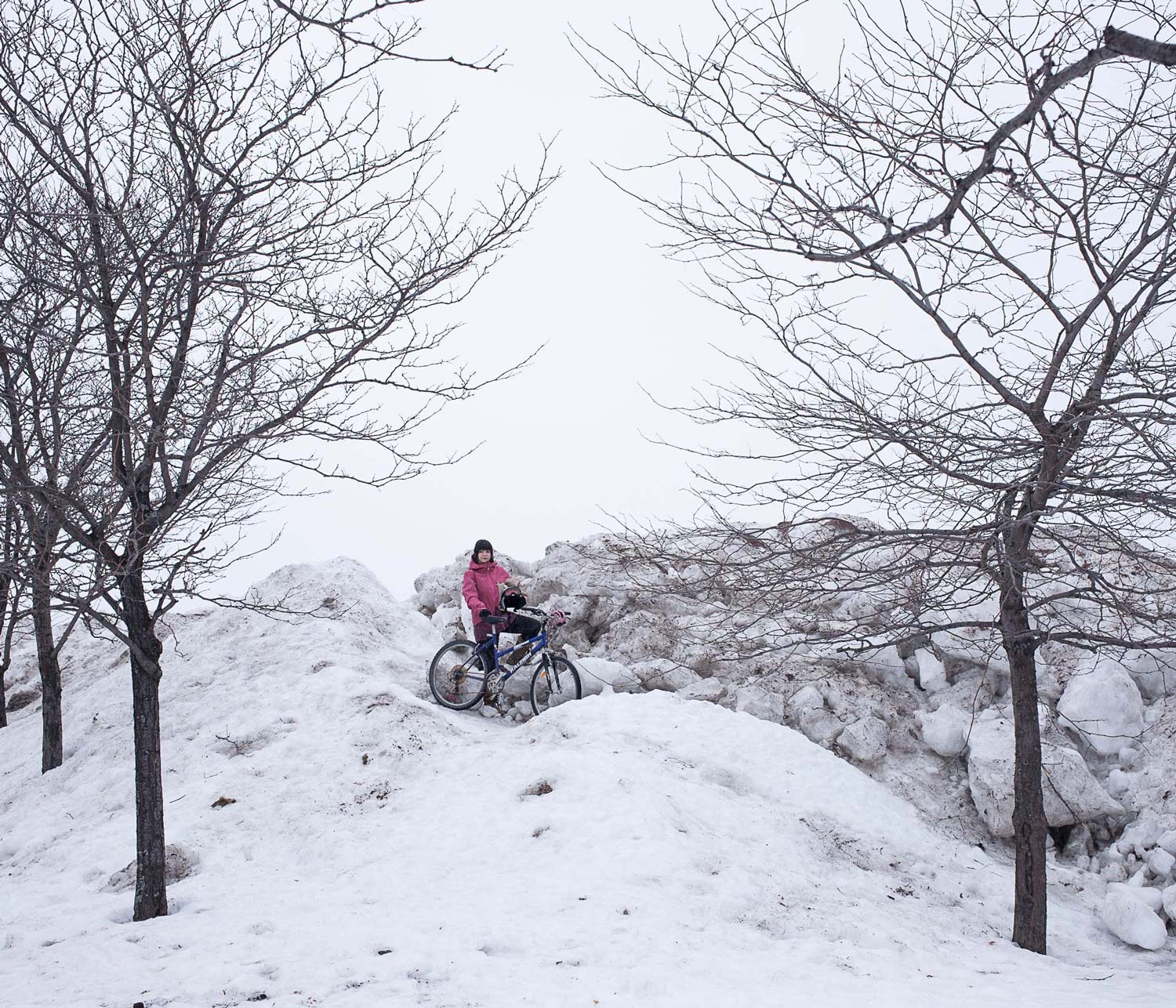 Fourth winter on a bicycle, photographed at Montreal’s Old Port (-3 Celsius). Riding through cold weather makes her feel like she fully embraces winter, even though she leaves the bicycle home during snow storms. For her, winter is full of surprises: “One day I spent 30 minutes using hot water to unfreeze my lock, only to discover I had a flat tyre…” 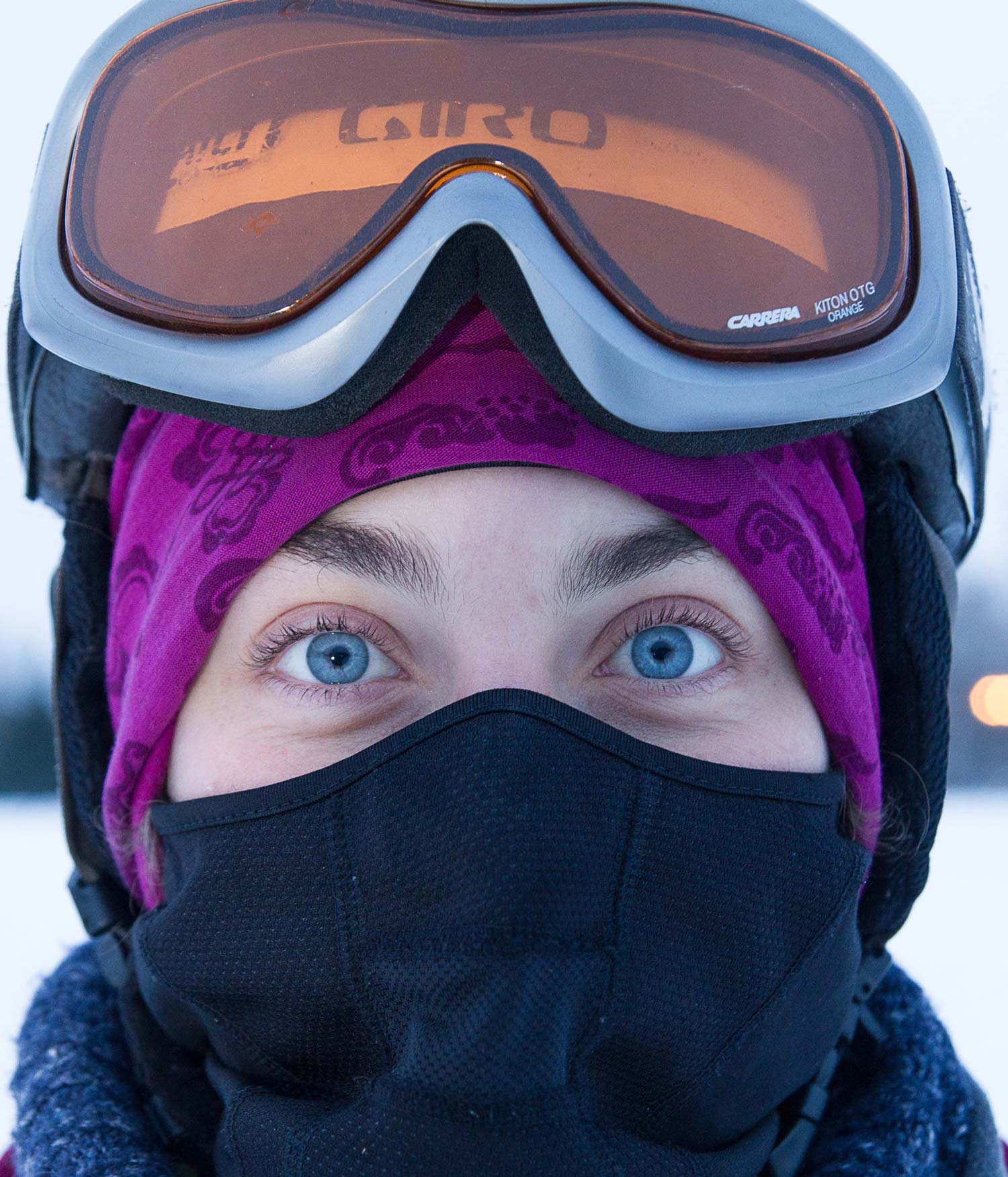 Fifth winter on a bicycle, photographed in the Villeray Park (-17 Celsius). Being very sporty, she sees winter cycling as the best solution to train and breathe fresh air all year long. “It’s also a must for calves,” she adds. Though, it sometimes feels like you’re living a double life: “You always need to be carrying a change of clothes.”

She concedes that Montreal would “lack adventure without winter cycling” but still advises “to use the subway on storm days when it might get too dangerous to ride.” 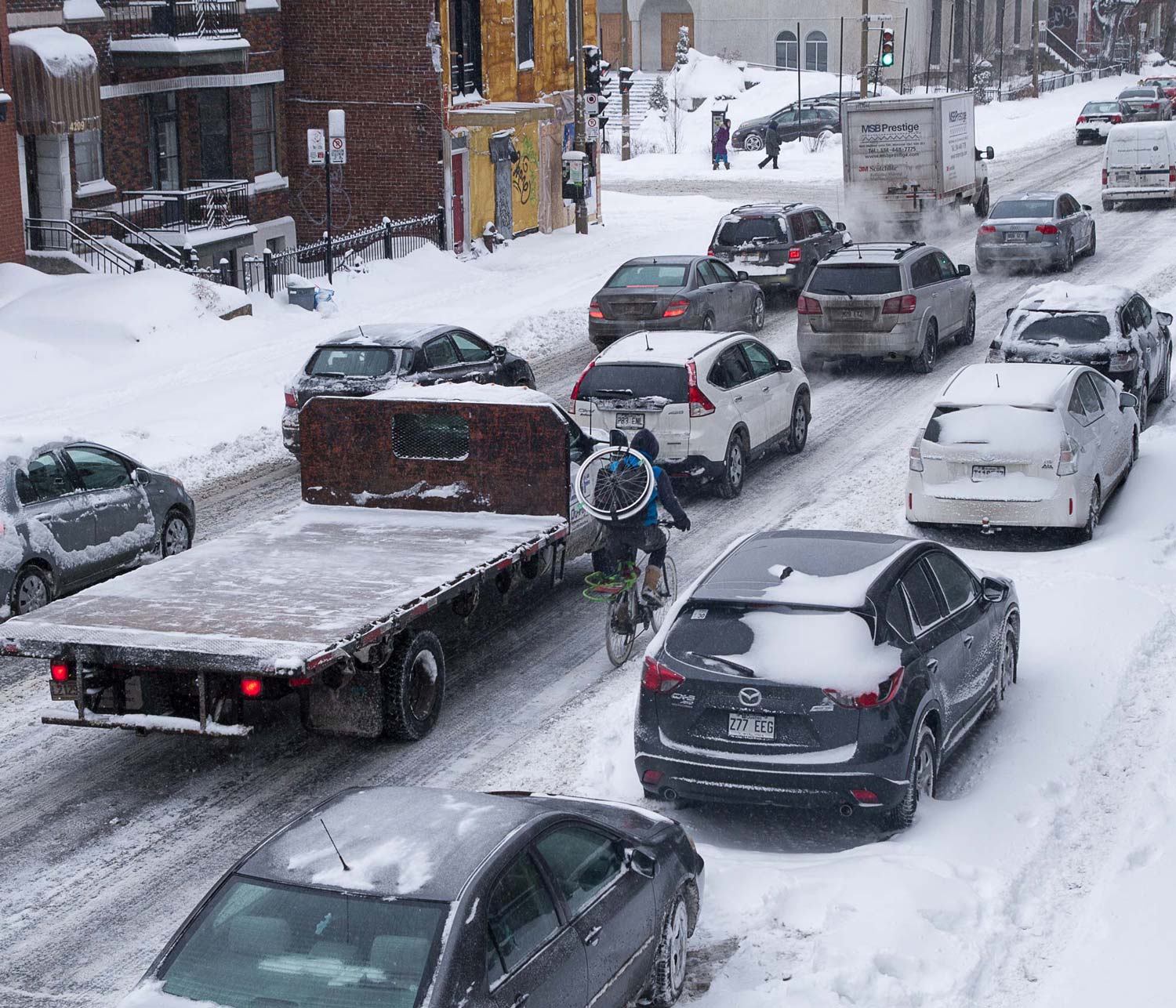 A fourth season winter cyclist is riding south in heavy traffic on avenue Saint-Laurent, the main avenue that separates East and West in Montreal. Accident statistics about winter cycling are virtually non-existent but most cycling advocacy group argue that the chances of getting hit in winter are the same as during the rest of the year. Often times, in case of black ice, main roads are safer than small streets or sidewalks. 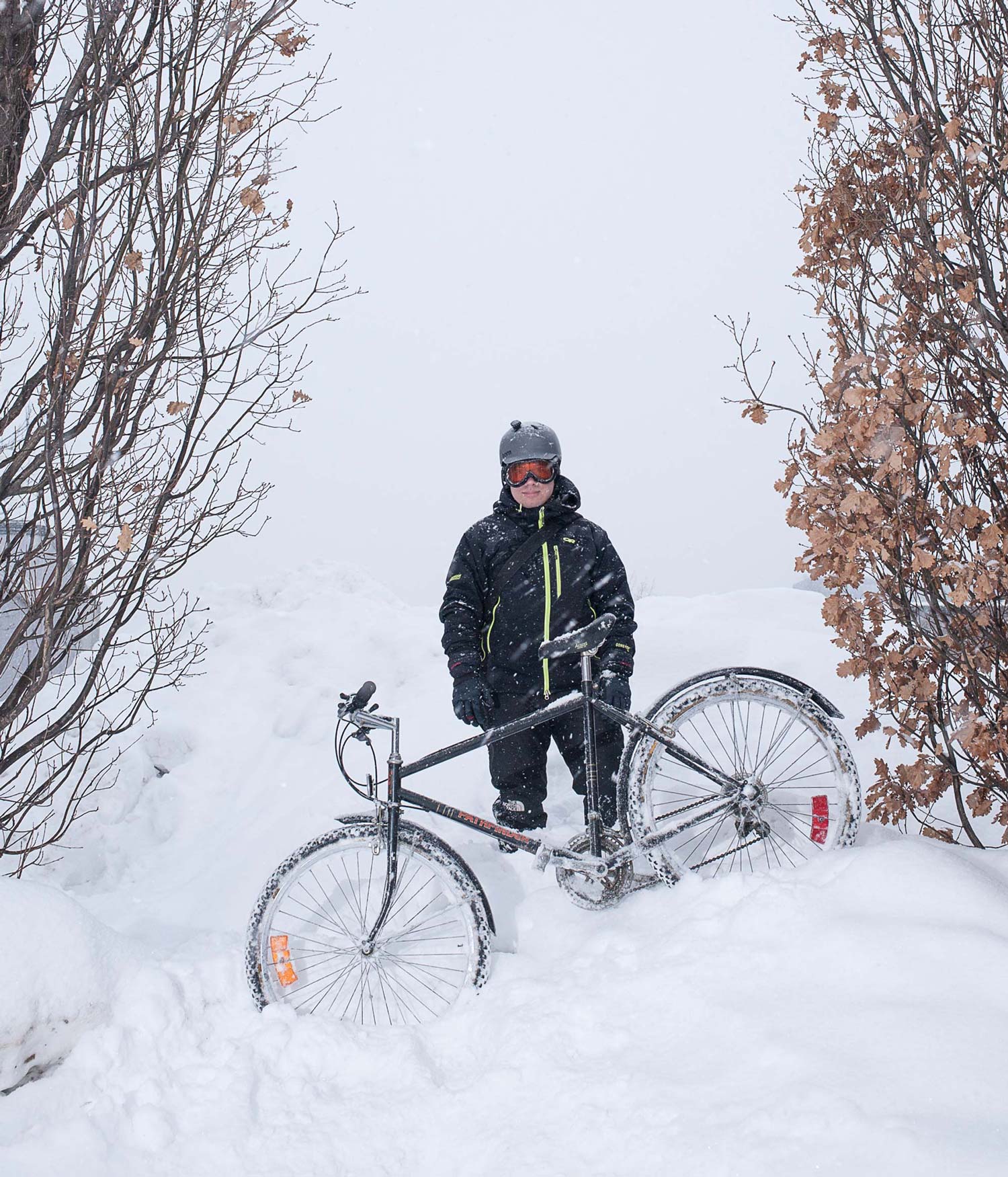 Second winter on a bicycle, photographed in South-Center area (-8 Celsius).

“Winter cycling is a cheap alternative to an inside gym and a great way to keep morale up in winter time.” 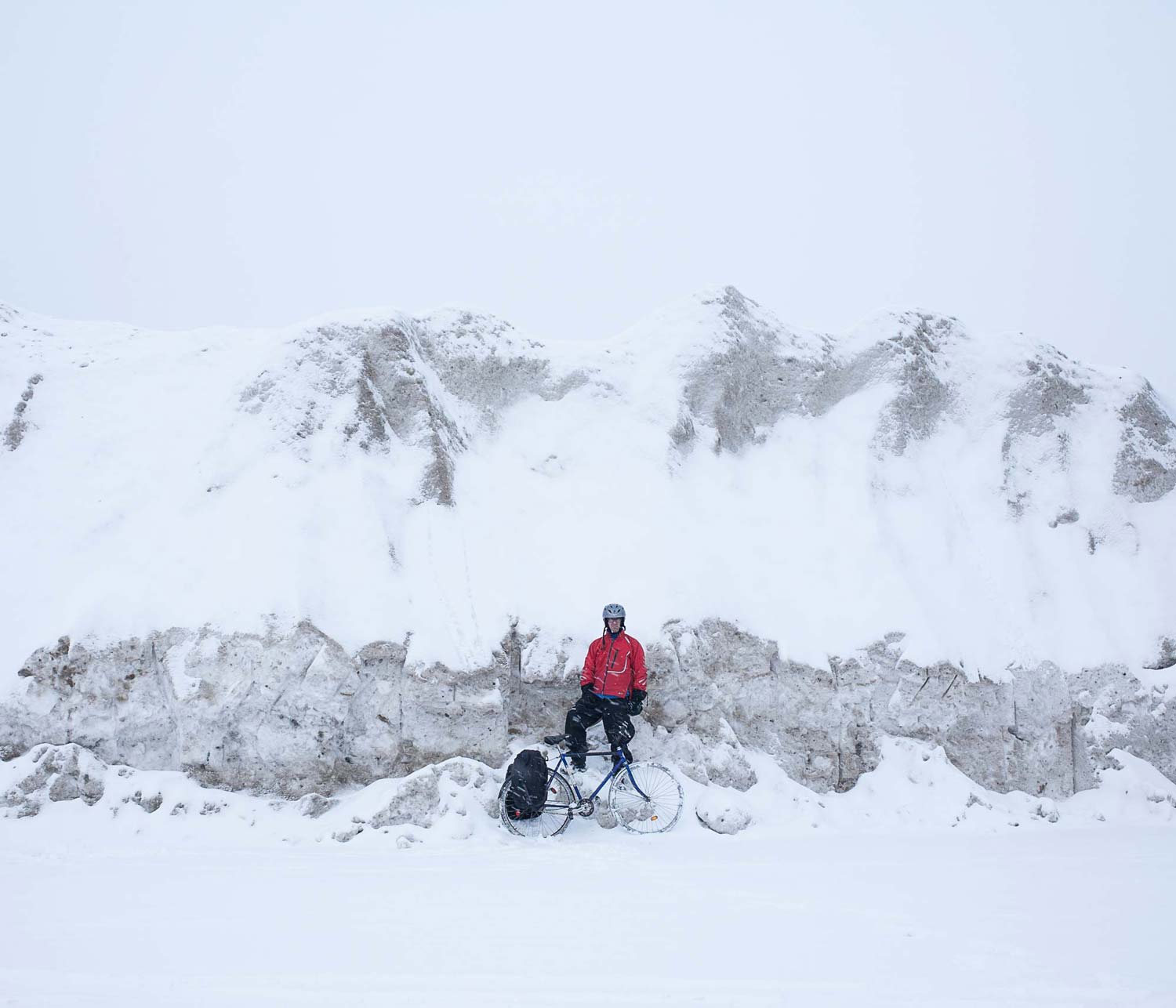 His third winter on a bicycle, photographed in the Rosemont area (-13 Celsius).

The most tricky part of winter cycling is to regulate temperature: keeping warm, without sweating. You usually need to carry warmer clothes to put on when you stop cycling. And very warm gloves are a must! 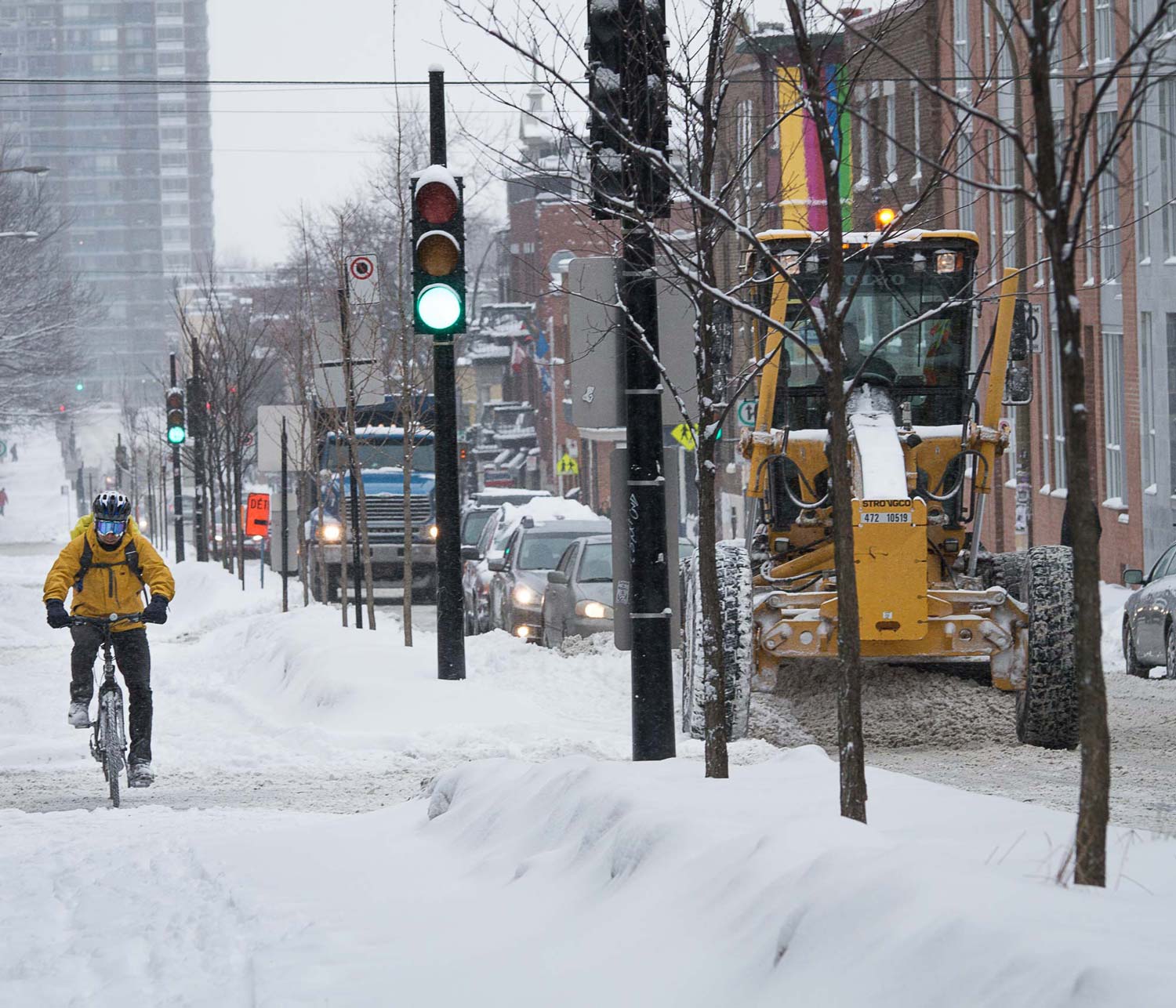 (-6 Celsius and during a snow storm)

A cyclist rides west on Rachel Street, the longest bicycle path in Montreal. The city tries to clear the snow from half of the cycling path during winter – roughly 250km worth of specific bike lanes around the city. 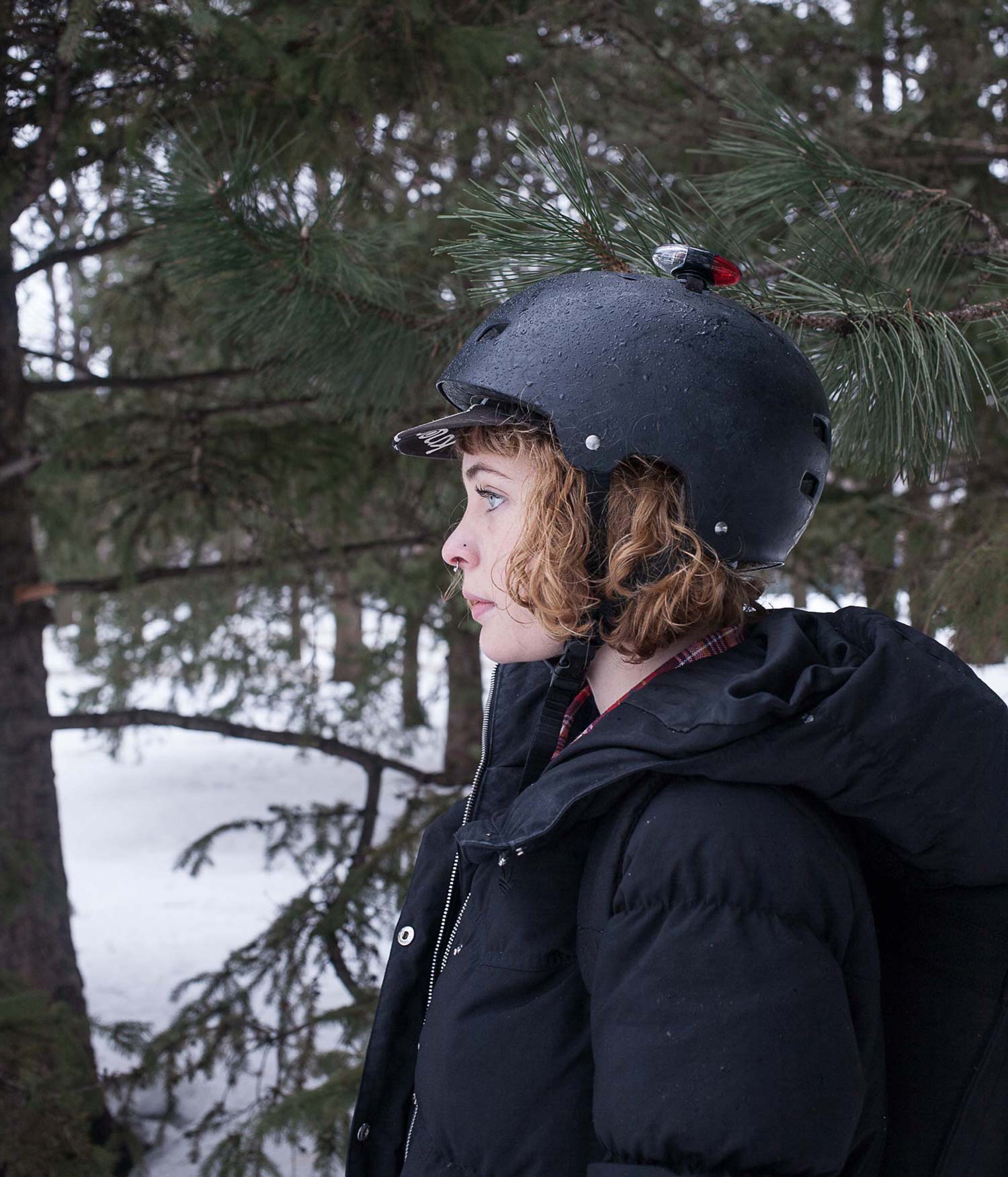 Third winter on a bicycle, photographed in Lafontaine Park (0 Celsius). Priscilla sees herself as a passionate activist for “life on a bike”. So, winter or not, you have to ride!

She uses two bicycles, nicknamed ‘Marcel’ for summers and ‘Marcel Jr’ for winter.

“The hardest thing is to keep calm when a car drives by only a foot from you.”

Still she understand and even feels sympathetic towards drivers who keep on honking her. “Four season cyclists often have to ride in the middle of the road…” 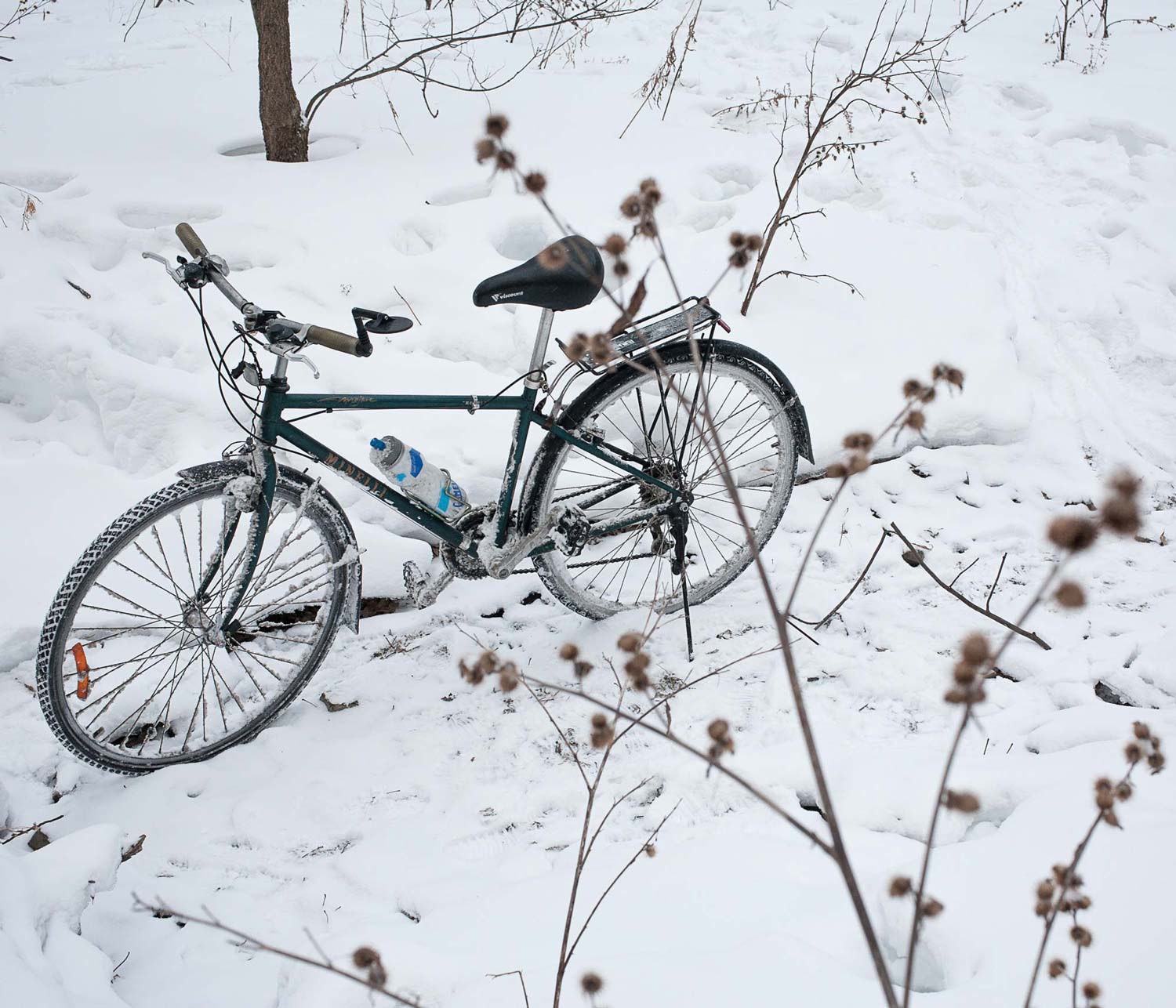 9. The bicycle of Gaelle Crete

Fourth winter on a bicycle, photographed in the Mont-Royal Park (-10 Celsius).

“Winter cycling creates conversations and exchanges. It makes you feel good,” says Gaelle. Even tough she remembers being told that “women shouldn’t be riding during winter…”

She advises to be well equipped with thin and knobby tyres on both wheels.