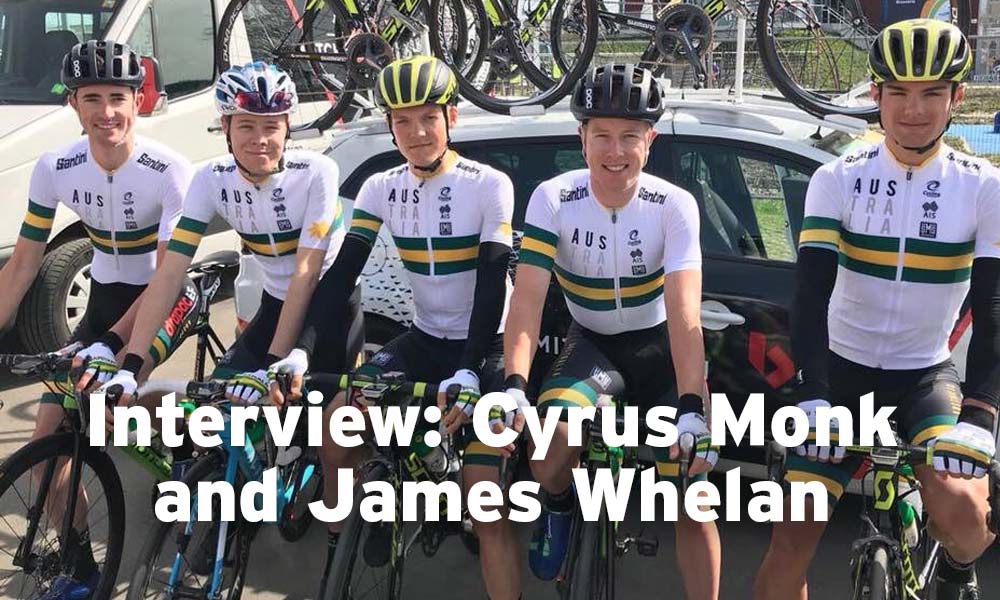 Cyrus Monk and James Whelan on under-23 Tour of Flanders

When there’s an impressive result by a rider who is relatively new to cycling, it’s worth finding out a little bit about the win… and the rider. We talk to Cyrus Monk and James Whelan about the under-23 Tour of Flanders.

It was late in Belgium but the two riders from the Drapac-EF Holistic development team who were in the top-10 of the under-23 Ronde van Vlaanderen were “still wired from the caffeine gels from the race”. Cyrus Monk and James Whelan were happy to chat despite the hour. It was 1.30am where they were but they answered the call from RIDE Media to talk about a pretty exciting result for Australian cycling.

This is an interview in two parts (which you can also hear if you click the SoundCloud link on this page).

The first part is with Cyrus Monk who explains the race, and how the under-23 edition differs from the elite version contested a week earlier.

The second is with James Whelan, the second Australian winner of the ‘Tour of Flanders’…

Click the link above to listen to the interview with Cyrus Monk and James Whelan.

RIDE: I woke up Sunday morning and found a text message from Michael Drapac saying, ‘James Whelan has won the under-23 Tour of Flanders and Cyrus Monk – another of the riders from the Drapac-EF Holistic Development team – has picked up a top-10. We’ve got three Aussies in the top 10 and I’m speaking with Cyrus Monk. Can you tell me about [the race]?

Cyrus Monk: “It was a bit of an unexpected result. It’s hard to know what to expect, for me and Jimmy especially – being our first under-23 race with the national team. We didn’t know how we were going to stack up against that opposition but we ended up, luckily, having the luck that’s required in that kind of race to get through and be involved in the final.

“It just so happened that I was in the main break of the day which allowed Jimmy, and then Rob Stannard as well, to have one of the easier rides in the bunch.

“Then, basically, as soon as our break got caught, Jimmy launched and that was the end of it, for racing for first. And then the rest of the guys were racing for second after that.”

Just give us a little overview of what the under-23 route is like compared to the one that we know so well that’s around 260km [for the elite men’s race].

Cyrus Monk: “It ends up being really similar. Instead of starting in [Antwerp, as the elite race did in 2018] we pretty much [got] straight into the cobbled sections. I think our first one was 15km in so it sort of cut out a bit of the ‘rubbish’ at the start which just meant that no break really formed for a long time.

“After the Muur van Geraardsbergen, which follows the same route [as the elite] up and through there, I was able to get off the front with a group of eight in a pretty long crosswind section. That became 12 after a while and then we followed the same route throughout the Kanarieberg and the Kwaremont and the Paterberg and then, after the Taaienberg, instead of turning back around and doing the finishing Kwaremont and Paterberg that [the elite men] do, we would go straight to our own different finishing loops.

“[It was] still quite hilly but it had a few less cobbled climbs than the finishing loops of the elite race which might have played in our favour given that all three of us who were in the top 10 hadn’t had much experience on cobbles as a lot of the rest of the field.”

And you’re rooming with Jimmy now, are you?

I might have a chat with him after if that’s alright.

Can you give us an overview of the vibe? Were there a lot of people on the roadside or does it all sort of abate after the big elite race?

Cyrus Monk: “Nah, I was really surprised. There was quite a lot on the roadside.

“There are obviously still a lot of people around here who will go across [to France] tomorrow and watch Paris-Roubaix, so there was quite a few people there [for our race] – and plenty of Aussies out as well, which was awesome.

“It was amazing the amount of climbs that you’d get to the top of an hear an Aussie accent cheering you. And enough of them knew who we were that it was quite exciting being able to race up those iconic climbs and have your name cheered from the side of the road.”

Fantastic Cyrus. Well, congratulations. It’s testament to the fact that you’re not just The January Man, you’re kicking and I dare say we’ll see a lot more from you this year.

Is it possible just to put Jimmy on the phone for a quick moment? 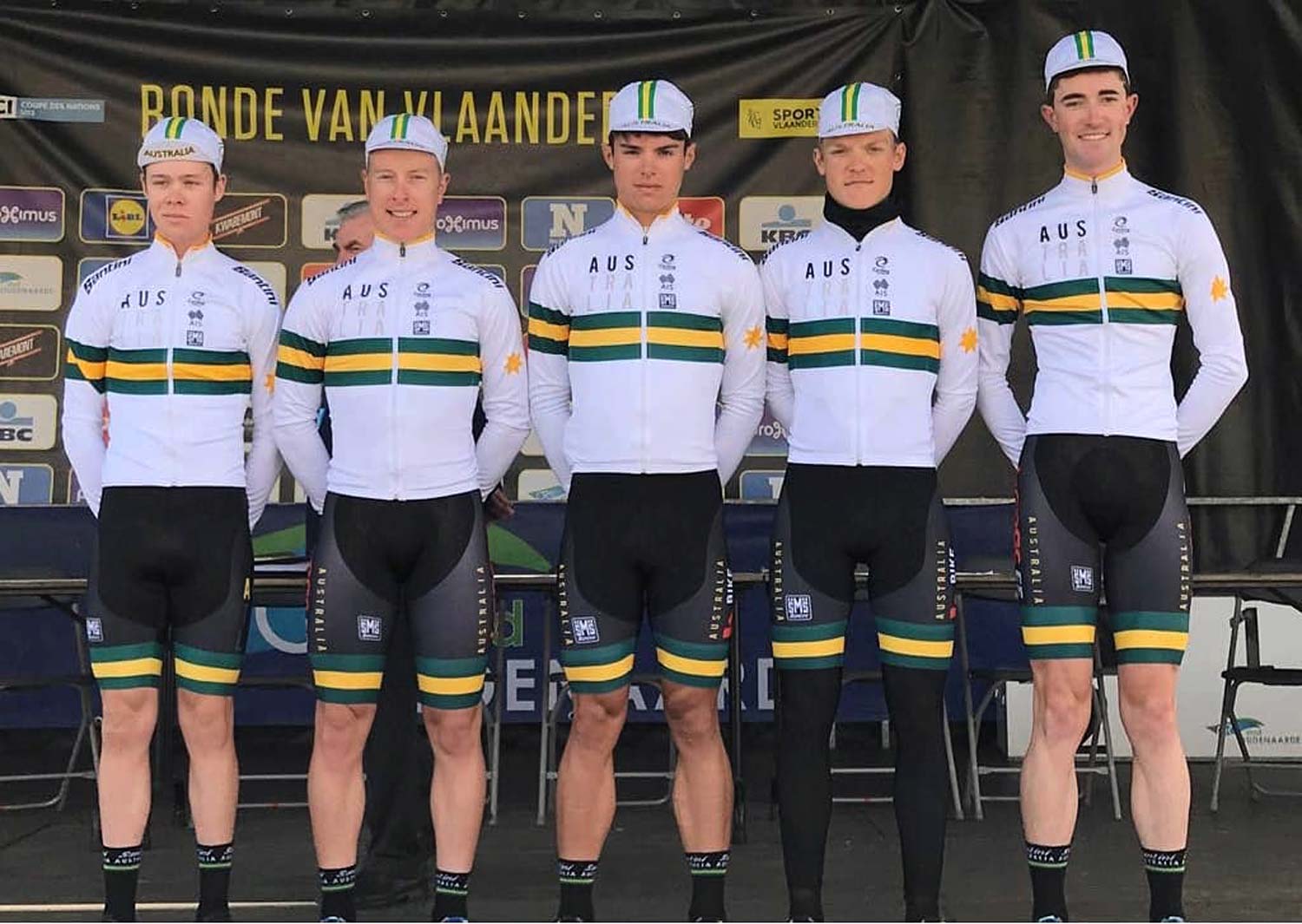 The Australian team for the 2018 Tour of Flanders.

RIDE: Just for the record, this discussion is taking place at about 1.30am…

Sorry if I woke you up… but I thought you might still be out of slumber.

James Whelan: “Yeah, we’re still wired from the caffeine gels that we had during the race.”

Congratulations on what you’ve done. It’s a huge result… can you just give us a little summary of your attack? From my understanding you went quite a long way from the finish. Is that right?

James Whelan: “Yeah. The idea of the course is that you do one big loop and then, with 40km to go, you come onto this finishing circuit and you do two laps.

“There’s a main climb coming into the finishing circuit at about, maybe, 25km to go. There would have been a group of 20 or so guys – 25 guys – really on the limit going over the top of this climb. And so I decided to sort of go over the top of the false-flat.

“I knew that, tactically, it would work well for us because we still had two other Aussies in that group who could then follow moves and sit on and get the others to chase.

“I guess the nature of under-23 races, it can often not be very organised so if you are going solo off the front, you don’t have a team that will necessarily work to bring it back.

“The finishing circuit had a few climbs on it and it was quite technical and really winding as well so I managed to stay out of sight even though, for a lot of it, I was 35 seconds up the road.

“The gap didn’t get further than 40 seconds – I think that was the biggest I heard.”

When you were just smashing out there on your own, did it feel like you were going to take the win or what was the sensation like? A bit of a mystery?

James Whelan: “It was really difficult to tell because I knew that there was a solid bunch behind me and I didn’t know if other nations were coordinated at all. If they did, they would have caught me. But they didn’t, which was good.

“It was really handy having Cyrus and Robert to essentially neutralise the chase because they just followed the wheels.”

I’ll just keep it quick today because this is the first time we’ve spoken and it’s late there and I’m pretty keen to spread the news over here. Just give us a quick overview of you; from my understanding you’ve only been in to cycling about six months, is that right?

James Whelan: “Ah, I’ve been cycling for a bit over 18 months now.

“I was an ex-runner, a middle-distance runner through school.”

You started [2018] with one team [InForm-Make] and ended up at the Drapac-EF Holistic Development team. Now you’re just doing like a stint with the Australian Cycling Team. Is that how it works?

James Whelan: “Yeah, we’re only here for a bit under a month. We’re doing two races: the Tour of Flanders and Zeelande Tour with the Australian national team. And then we go back [to Australia] for six weeks and we go back over again for about seven weeks with the actual Drapac-EF team.”

And just quickly to overview the switching of teams from InForm to Drapac… can you just summarise that in a sentence or two?

James Whelan: “Yep. After the nationals a few teams were interested in provide opportunities for development as a cyclist and fortunately Drapac were able to provide that window of opportunity for me. That was sort of all based off my second at the nationals.”

But we’re here now talking about the Tour of Flanders… I just thought I’d catch you while you were still half-awake and get a couple of lines from you. Thanks for explaining all of the things that you have. And congratulations on what you’ve achieved. I think it’s pretty epic for Australian cycling.

James Whelan: “Yeah, thanks. It was really good getting three in the top 10.”

Pass on our congrats to Robert, I gather he’s in another room but to see two guys smiling on the podium… that’s pretty amazing.

James Whelan: “Yeah, it’s awesome. We’re pretty happy. All smiles in our house at the moment.”