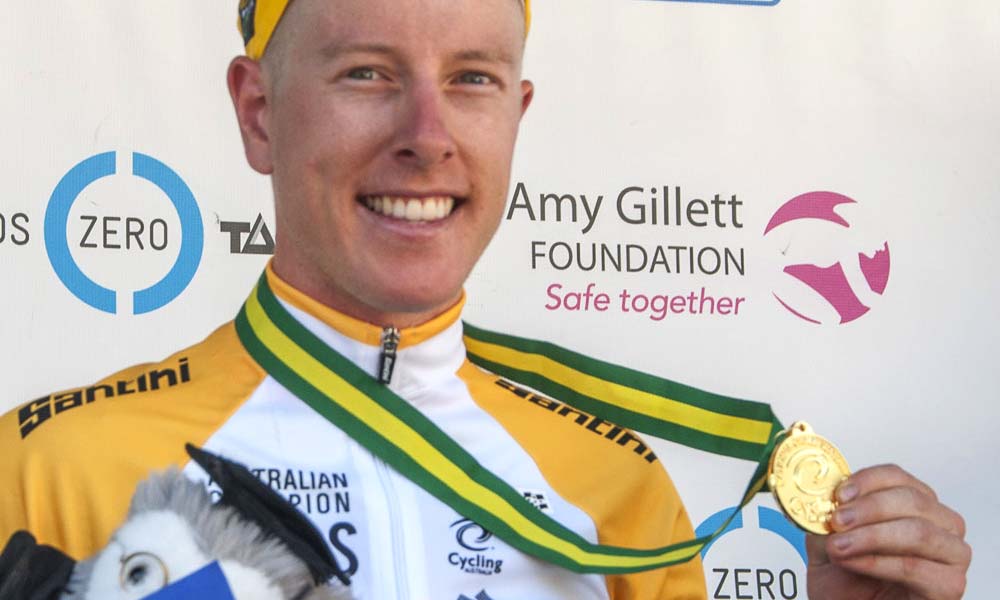 Cyrus Monk tells the story of a race better than many far more experienced riders. This is an interesting interview because of the quality of his answers…

On the first Saturday of 2018, Cyrus Monk set several precedents: the first rider to win an Australian national championships using a road bike with disc brakes; and the first rider with an EF Education First logo on his outfit to win a race. He’s from the Drapac-EF Holistic development team presented by Cannondale. He’s 21. And he told the story of his morning ride in Buninyong to RIDE Media on the evening of this historic win.

Here is a quick Q&A with Cyrus about his ride in the under-23 national championships, one of the most hotly contested races in Australia each year.

Click the SoundCloud file to listen and/or read the transcript below.

Click the link above to listen to the interview with Cyrus Monk.

RIDE: It’s the afternoon of Saturday the 6th of January and we’ve got a new national champion in Cyrus Monk and he’s chatting to us on the phone. I’m in Sydney, he’s in Buninyong, or nearby Ballarat, and I just thought I’d get a quick overview of a most interesting under-23 race. How was it for you? Abbreviated but successful.

Cyrus Monk: “Yeah, thanks very much for that…

“It didn’t really feel, out there, that it was shorter than usual. I wasn’t focussed on it.

“It just meant, for a lot of riders, that they had a pretty short race out there today. But it was certainly pretty tough still.”

We talked a little bit before going on the record and you said that your team-mates set you up perfectly. Can you just talk through the chores that different riders did?

“Yeah. So, we came in with a pretty small group. We only had four of us in the under-23s… the last few years we’ve had quite a few in [the equivalent race] so we had to try and race it and really think about how we were going to use our guys.

“I knew coming in that I had some decent form and was probably going to be the best up the hill out of our four but none of us really backed ourselves to do anything amazing on the climb so we really wanted to make it hard on the other sections of the course.

“I was lucky that I had James Pane following moves early and then Patty Burt in the middle section and then Liam Magennis towards the back end; it was really good just getting up the road on the opposite side of the course [to the rest of the bunch], that helped me massively a few times – especially with Liam getting in some really dangerous moves in the crosswind sections that we had on Gear Avenue.

“That’s pretty unusual that you really get it splitting up there but there were a few splits that happened this year and that was when I was able to sit in the bunch and let others take me across to the moves on the hill… I never had to touch the wind on the hill until I was by myself at the end.

“That’s pretty much… yeah, I wouldn’t have been able to win the race if I didn’t get the armchair ride earlier on.” 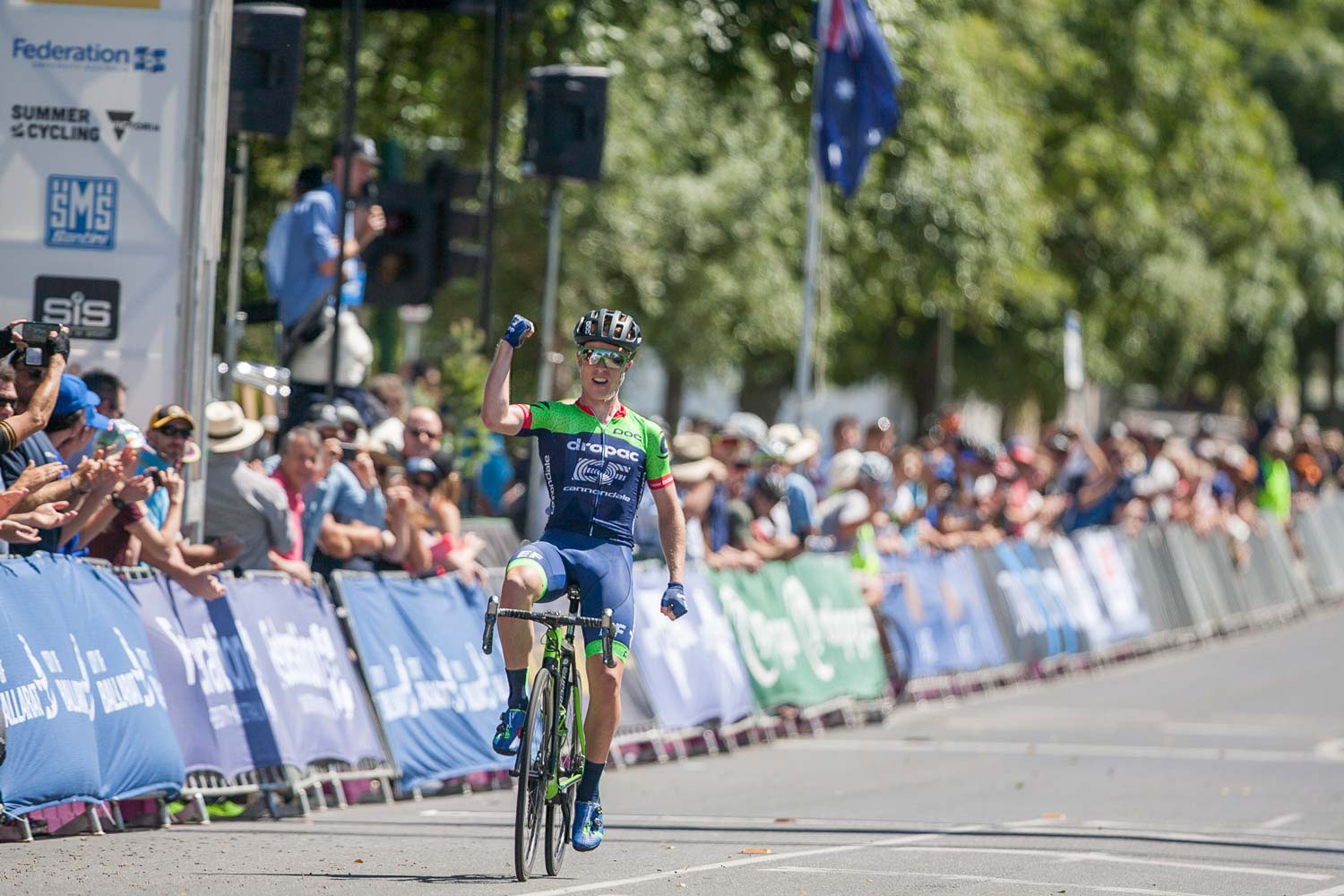 Cyrus arrives at the finish 26 seconds ahead of his nearest rivals… with training partner James Whelan finishing second in the under-23 road race.

You said the numbers you were putting out at the end were pretty close to what you did at the start. It’s just that you “were consistent”. Is that an accurate appraisal?

“It was interesting because me and James Whelan (the eventual runner-up in 2018) came out here on a training session together maybe a month ago now.

“And he dropped me.

“I think we did the hill 12 times and he dropped me 10 out of the 12 times and the two times he didn’t drop me were the two warm-up laps. So I knew he was going to be tough to beat around here.

“I think my lowest wattage that day (in training) up the hill was 410 and my highest wattage for the whole hill today was 405. So, like, it’s completely different in the race scenario, when you’ve got attacks going on the other side of the course and it’s so stop/start on the climb that the actual raw power numbers are not what wins you the race, luckily, because I don’t have that compared to the other guys.

“It ends up just being how much you can save early on in that race. And, luckily for me, I was able to save quite a bit.”

Just while you’re talking about numbers… 405 on your weight – what’s that watts per kilo at the moment?

“Ah… probably… just doing the maths now: around six watts per kilo, so really nothing special for only six minutes.

“Ideally I’d like to be able to do that for a lot longer – and I’ve done that kind of thing in training – but in a race scenario it’s so rare that you actually just get the full-gas six-minute effort. And you never… like, unless you’re doing it on the first lap – like those guys in the break would have done way better numbers in their first lap getting away, than I did for the whole race.

“But, luckily, it’s not the numbers that win you the race, it’s how you use them. That definitely played to my advantage today.”

It’s a pretty big triumph. You can put yourself down as the first winner [with] a new sponsor with EF Education First. Have you contemplated that concept?

“No, I hadn’t even thought about that to be honest.

“I think it’s just really good for our team because we have signed a few good riders and we’ve got a few improvements to the team, plus heaps of guys developing from last year. It’s really good just to take the pressure off at the start of the season. We know we’ve got the win under the belt now. And we know we can do it.

“So, I think it gives all the guys a lot of confidence.

“And even, I think, the WorldTour guys tomorrow – [those] that we’re affiliated with – it just lifts the morale when you can get that winning culture happening early.

“It’ll be really good to continue that and just really take that confidence into races in the future, whether it’s the WorldTour team racing here in Australia, stuff like [the Tour] Down Under, or whether it’s our team going forward into [the] Sun Tour.” 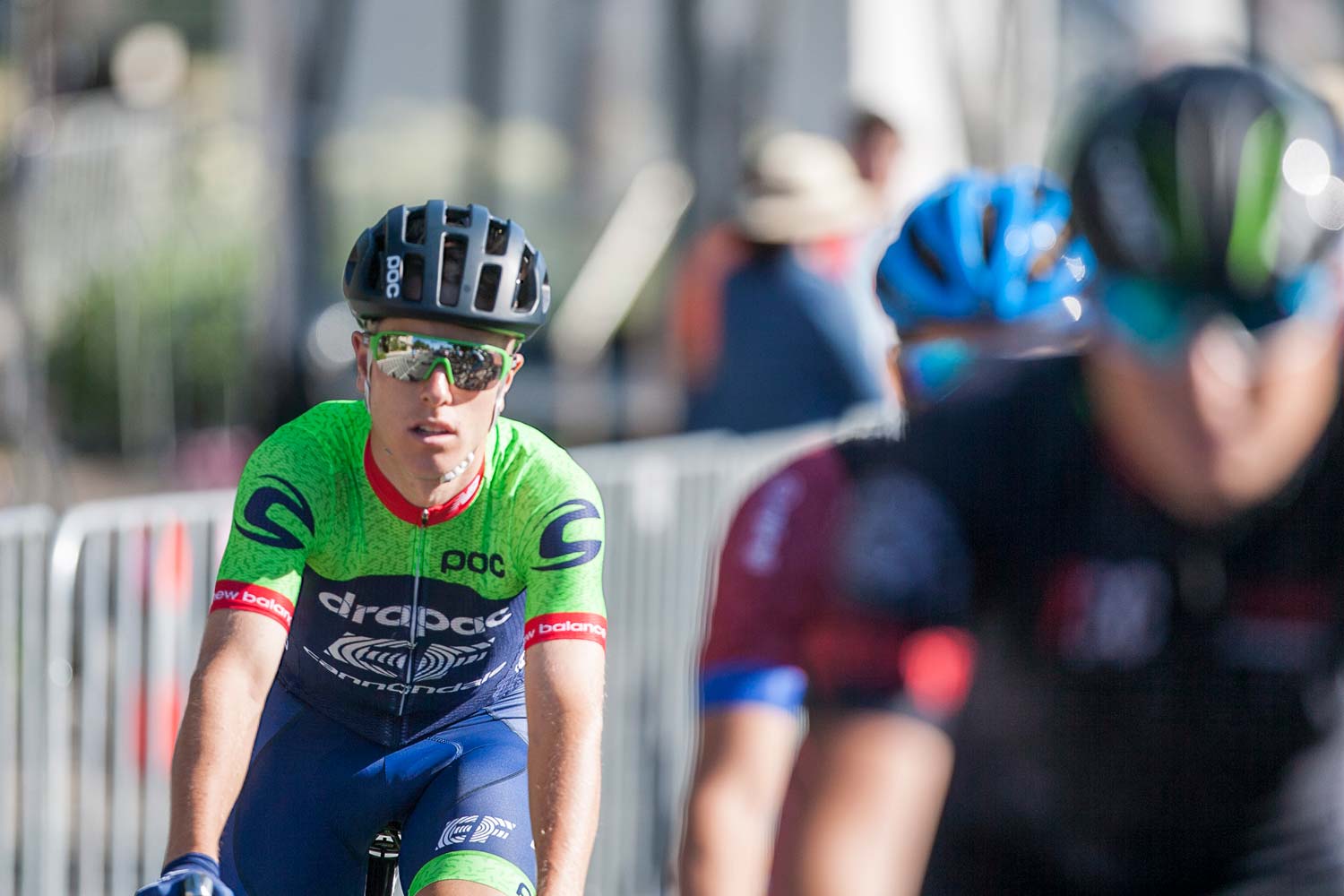 Monk’s win is the first with the new team sponsor, EF Education First.

We can assume now that you’ll get a ride with the UniSA team for the Tour Down Under. Are you expecting that?

“Ah, yeah. I really hope so. It’s a bit of a worry at the moment whether I’ll be able to get that spot just given how that team works these days.

“The Bennelong team will have five of the seven riders. And, historically, the under-23 winner has always got a spot on that team so I’d feel pretty stiffed if I did miss out on that at this stage but I was always targeting the Sun Tour as the, sort of, ‘Grand Final’ of my summer so I’ve got to be prepared either way.

“But I’d really like to do [the Tour Down Under] with UniSA and it depends on how the elite race goes tomorrow, obviously. We only have the two spots left. If some non-WorldTour riders light it up then obviously they deserve a spot in that race. But I feel like I’ve done enough today, and I’m definitely in some of the better form out of the under-23 riders, so I feel like I’d be pretty hard done by to miss out on a spot at this point.”

We don’t want to talk about selection crisis on a day when you’ve had a big triumph and pulled on a green and gold jersey. I think you must be pretty chuffed with that concept.

“Yeah, definitely. That’s definitely a good conversation to be having with the team management at the moment.

“For me it’s pretty simple still. I’ve just got to try and ride my bike as fast as I can. And it’s lucky that I’ve got some good people in my camp to deal with the rest of it.

“I’m just stoked at this point to have pulled that off. That was basically all you can do when you pull up on the start line; do everything you can to win the race – or help your team-mates do that. And it was lucky we had four guys today that were completely committed to that and we were able to pull it off.

“That’s a pretty great feeling at the moment.”

A big sponsor of yours is Cannondale and I spoke with Theo [Yates] the other day about what it was like racing with disc brakes. You’re, as far as I know, the first national champion to have won with a disc brake bike. Any comment on that concept?

“I hadn’t even thought about that until just before when I started seeing the pictures going up and [with] people taking photos of my bike after the race.

“It’s really good, I think, for all of the guys to get that confidence that the bike is definitely… you can definitely win a race on that bike.

“The bike itself is obviously awesome. Cannondale obviously did really well with it last year…

“Everyone was asking me afterwards, ‘How were there disc brakes going?’

“I think, in something like today, the main factor is that hill. Like, there’s the few turns through Fed Uni where I definitely noticed we were able to brake later, but in terms of today, the brakes aren’t going to make that much difference. It’s more about how you’re going up the hill. But I’m really excited to go and race in [places] like Belgium with those bikes. I think all the rest of the boys in our team are super keen to give them a crack in the wet.”

It’ll be a different dynamic all of the time, climbing versus descending and all sorts of things. But it’s fantastic to have a quick chat with you. Thanks for taking a little bit of time out on a big day.

“Yeah, no worries. Thanks for having me.” 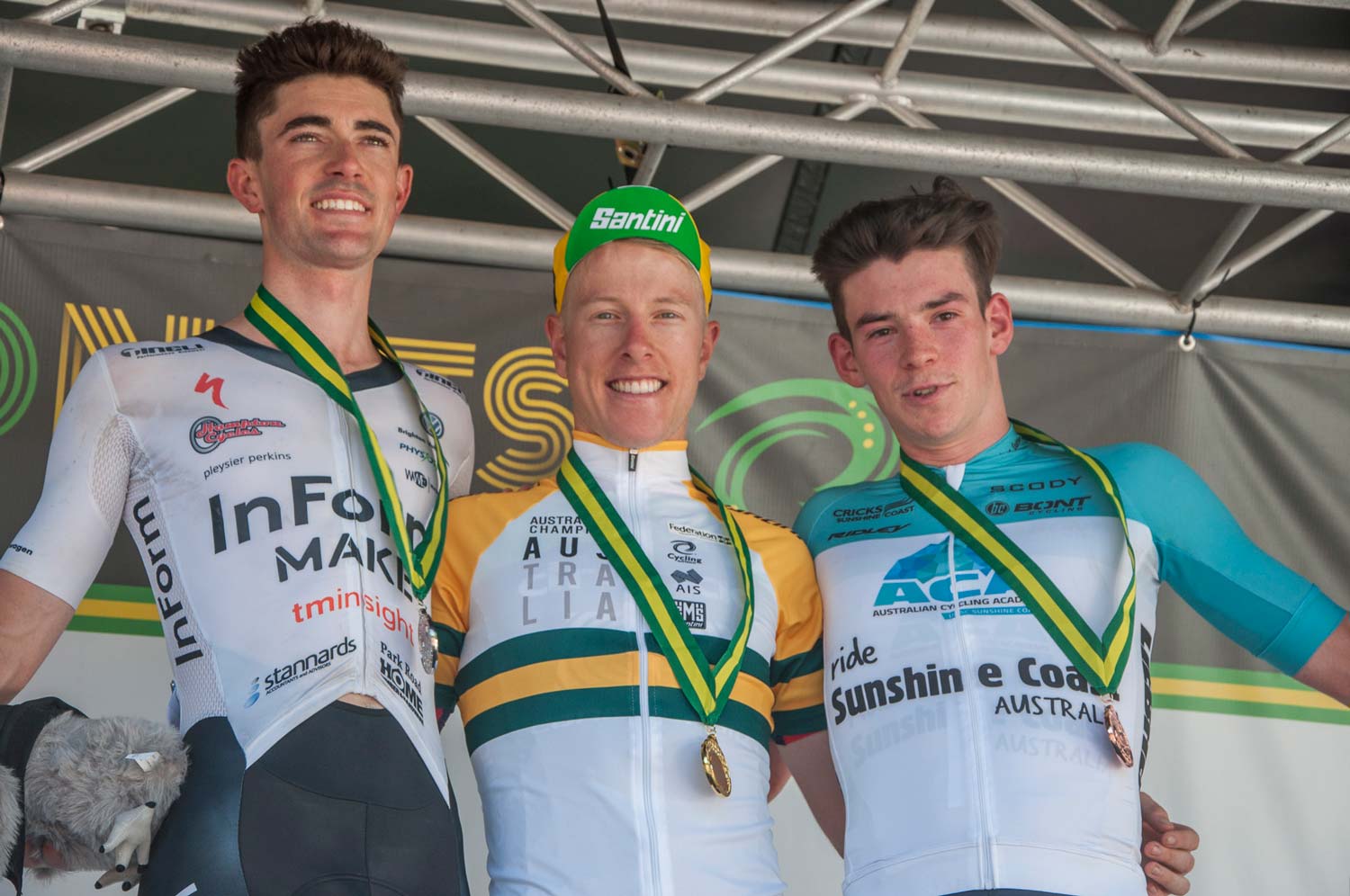 The podium and Monk in green and gold.

See a gallery of images from the nationals on RIDE Media.