Darach McQuaid, Mitchelton-Scott Team chairman: “The Australian flag is still very much on the team car”

RIDE Media caught up with the Mitchelton-Scott team’s chairman, Darach McQuaid, on the morning of stage 3 at the 2020 Tour de France. With a rider in 2nd place in the big race, there was plenty to talk about. 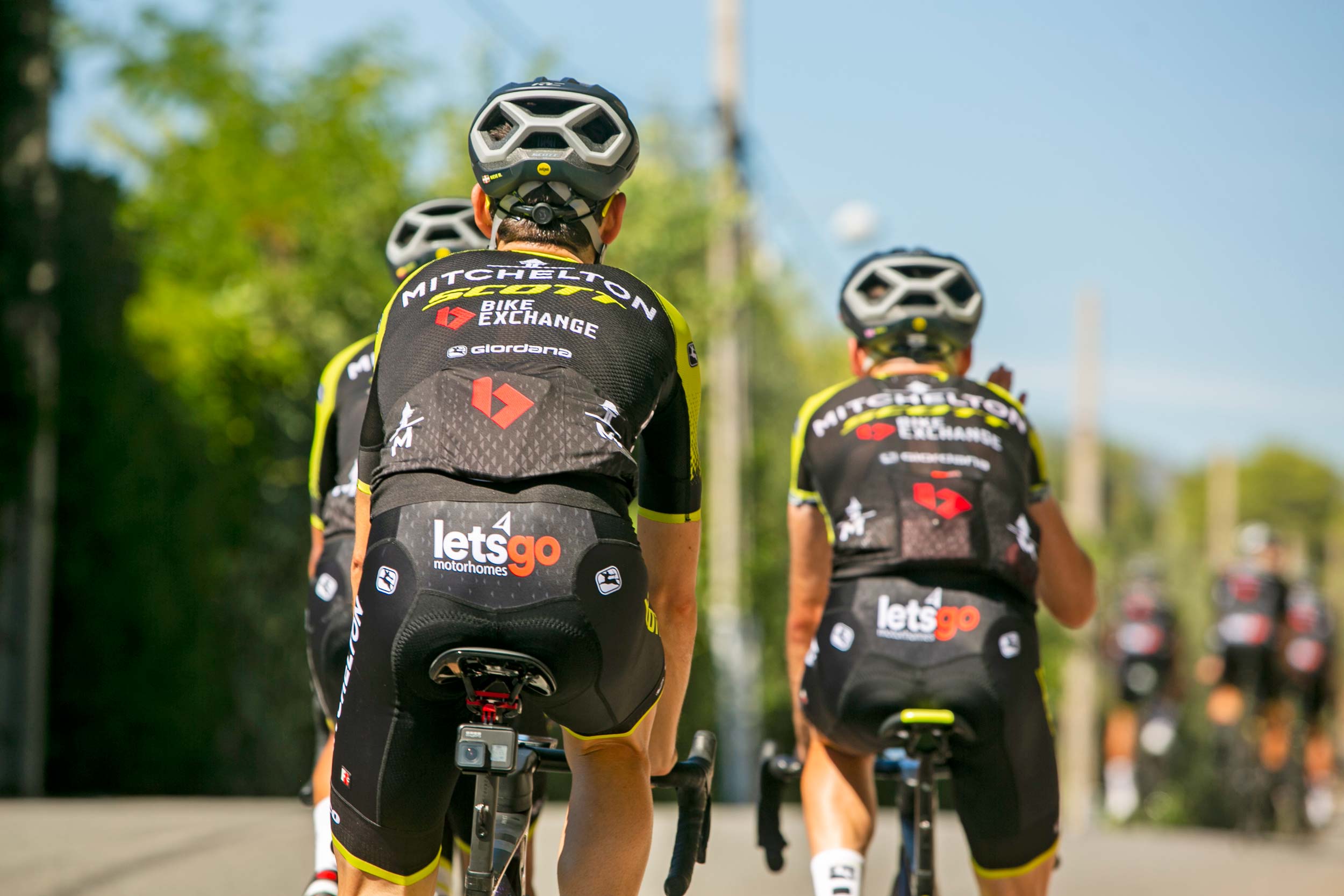 In the second stage of the Tour de France, Adam Yates chased down a blistering attack by Julian Alaphilippe on the final rise of a challenging race. It was a performance that would elevate the leader of the Mitchelton-Scott team to second on GC.

There are many stories unfolding for the Australian team, but the stars who are in action at the moment aren’t Aussies. In this impromptu interview, the chairman of the team, Darach McQuaid, speaks about the Tour, the performance of Yates, and the incredible influence of Annemiek van Vleuten who is a shining light of inspiration who unites everyone in the ‘GreenEdge’ family.

– Click the SoundCloud file to listen to the Q&A and/or read the transcript below. –

RIDE Media: I’m speaking with Darach McQuaid, who is the new chairman of Mitchelton-Scott, which is also colloquially known as ‘GreenEdge’. It’s a team registered [as Australian]. You’re an Irishman and there’s a lot of things going on at the moment; should we talk about the Tour de France or maybe even the recent signing of Michael Matthews, for next year? Have you got a topic you’d prefer to start with?

Darach McQuaid: “I think we could start with the Tour de France in general, because of the year that we’ve had it’s probably a miracle that the Tour has started at all.

“I think all of the stakeholders in cycling have worked very hard – from the UCI, ASO, and the teams. I know, from our point of view, we did a really big block of work to prepare for a season restart, in terms of our own COVID-19 protocols.

“I suppose I’m just really happy to see that big-time racing is back, even with strict conditions. It’s great to see the Tour de France at the weekend.” 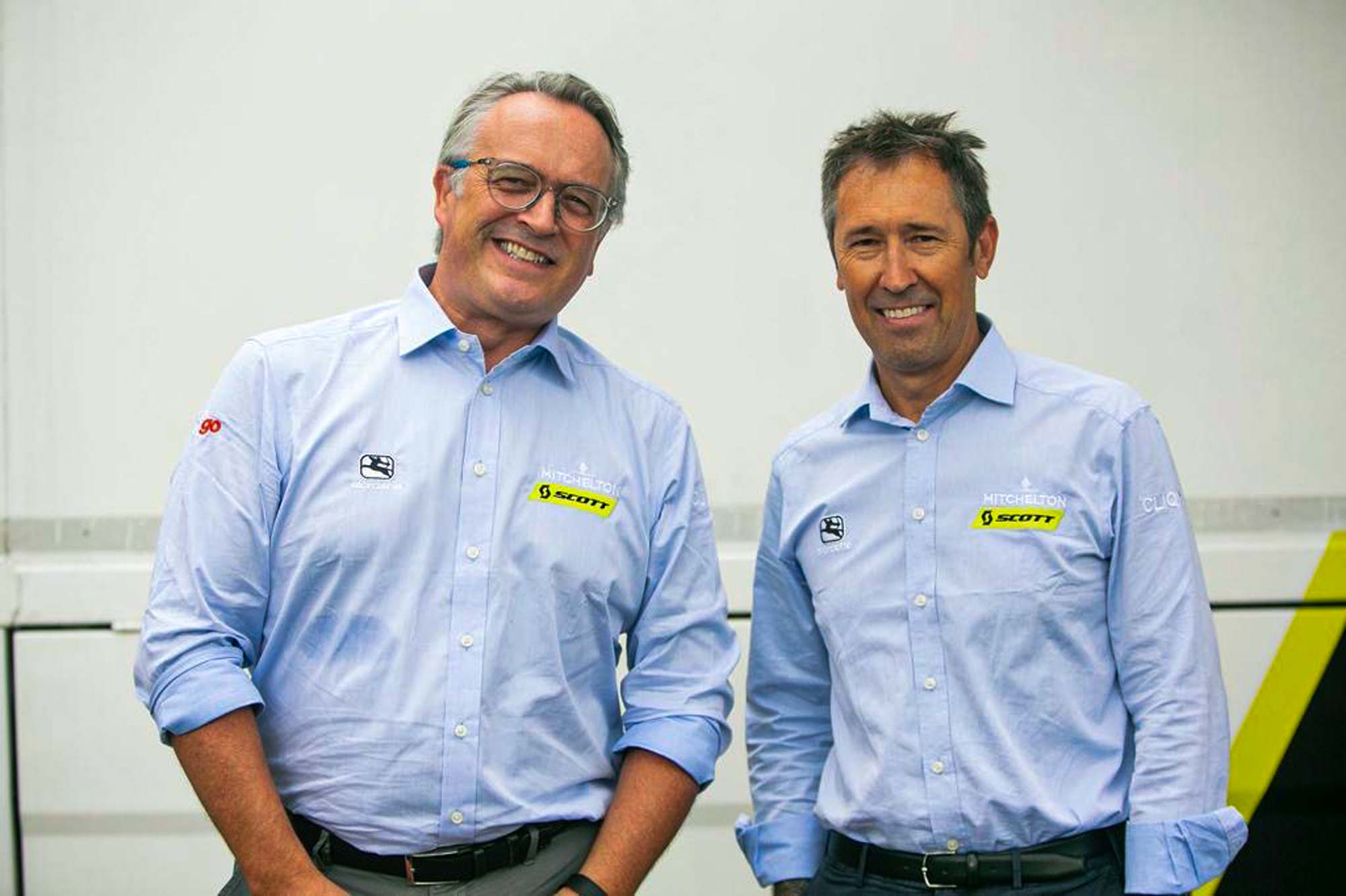 Darach McQuaid and Brent Copeland, the Chairman and CEO of Mitchelton-Scott.

RIDE Media: You’re currently in Italy. I wonder if you could just explain the last few days of your movements and how it was, and what the experience in Nice was like.

Darach McQuaid: “Well, it was a very, very unusual experience, I must say, because I’ve attended many Tours de France but I arrived at the team hotel on Wednesday morning. And, from Wednesday morning to Saturday morning, I really just left the hotel once and that was to go to the permanence, to the race headquarters, to get a nasal swab, and then straight back to the hotel.

“So, we were not allowed to kind of wander out and have a coffee or go to a bar or go to a pharmacy, or anything… our team bubble was very, very strict. So, it was a very unusual experience.

“Even at our hotel, for example, even journalists were not allowed to interact with the team or any of us in the bubble at the hotel either. It was unusual but I think people are just getting on with it. They realise that, as I said, it’s great to be starting the Tour de France. Even with these strict conditions, it’s just great to be back racing. But it’s not like any Tour de France I’ve attended before.

“And then on Saturday, stage one, which I attended, we went down and saw all this black hording along the barriers, essentially to stop fans literally even being at the barriers. So, it’s just unbelievably unusual but we’re going to get there.” 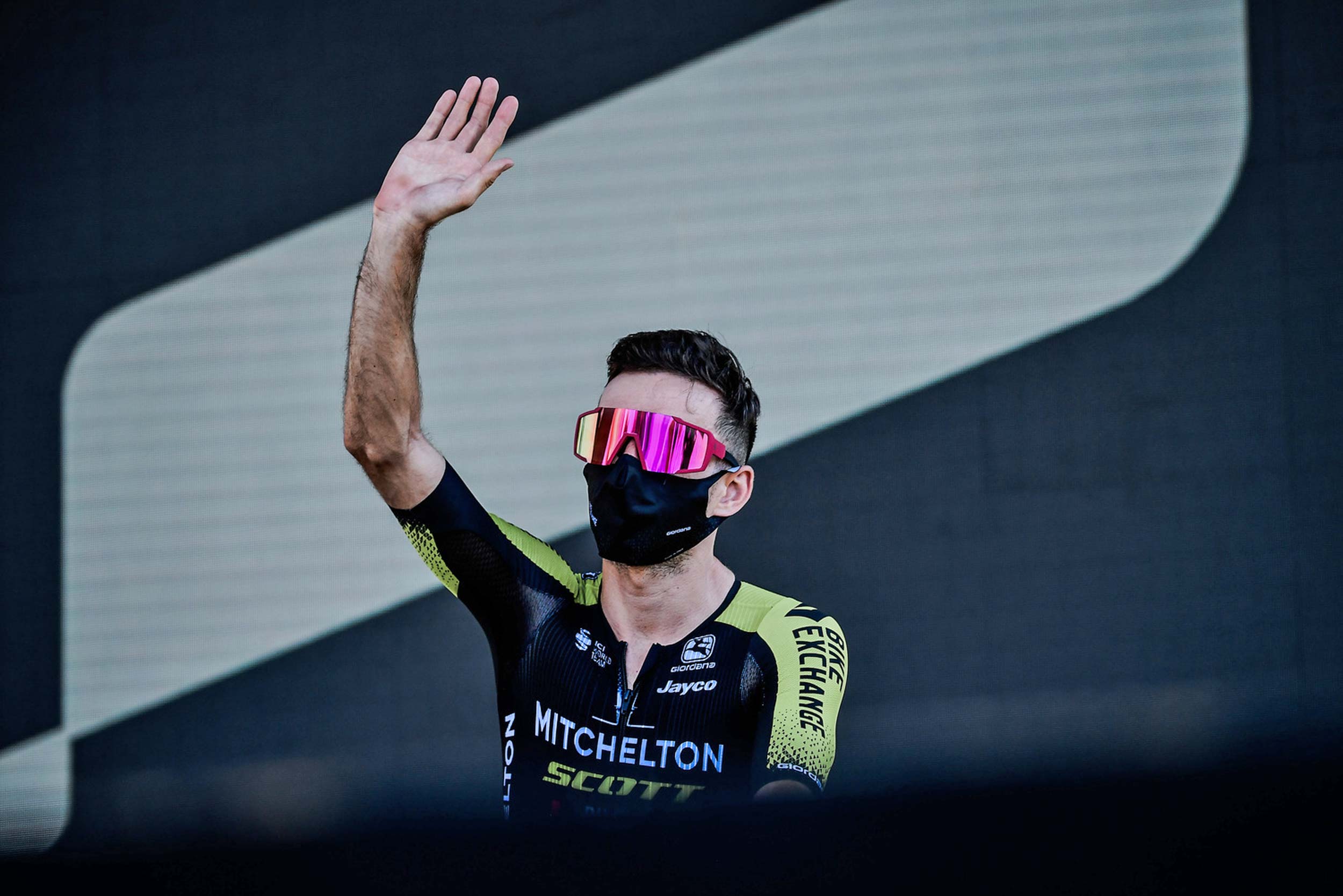 Adam…? Is that you? (Photo: Alex Broadway, via ASO)

RIDE Media: Speaking to you as someone who is effectively in the role to try to lure in sponsors, this is usually the biggest couple of days of the year, where you get to showcase what’s going on and perhaps lure in some investors. How does the absence of that opportunity impact on the future of the team? Can you try and overview that?

Darach McQuaid: “We have some potential sponsors who did want to attend the start because normally the start is: you bring them to the team presentation, they can be in the team hotel because the riders are there for three or four days, and meet the staff, meet the riders… but that is just not possible. And that’s understandable.

“So, it’s great that we have commercial interests but it was just not realistic to be taking potential sponsors to the Tour this year.

“On the flipside, we saw in yesterday’s stage, Adam Yates was very aggressive and now lies in second overall on the general classification.

“At the end of the day, it’s all about television and our team has already had really high visibility. So, we’ll get there in the end in terms of commercial sponsors. But it was just wasn’t practical – or even possible – to bring them on the race over the weekend.”

RIDE Media: It is really nice to hear you talk about Adam’s position on GC but also the opportunity to talk about the racing. It was a really strong bridge, when he crossed over to the earlier attack of Alaphilippe, and for him to be up in that company was very impressive. With Alaphilippe [in] first and Adam in second, it does bring the team into the headlines. What can we expect from now on? Today is a different kind of day but you’ve got a team in stomping form…

Darach McQuaid: “I think we’ve shown since the lockdown finished in late-July, both the men’s and the women’s teams… it’s been so impressive to see them come out of the traps and win so many races and be active, and very visible in practically every event that we’ve gone in. That’s a combination of the discipline the riders showed in lockdown, which was difficult for everybody, and also the staff.

“So, we couldn’t have really hoped for better in how we came out of the traps in late-July and early-August. And that is going to reflect pretty similarly in the next three weeks, hopefully, because talking to the eight riders and the staff over the last few days, they are not just motivated but a capable group of riders. Any one of them could win a stage, or multiple stages.

“We can expect to see more of the same as what we saw from Adam yesterday, on a daily basis.” 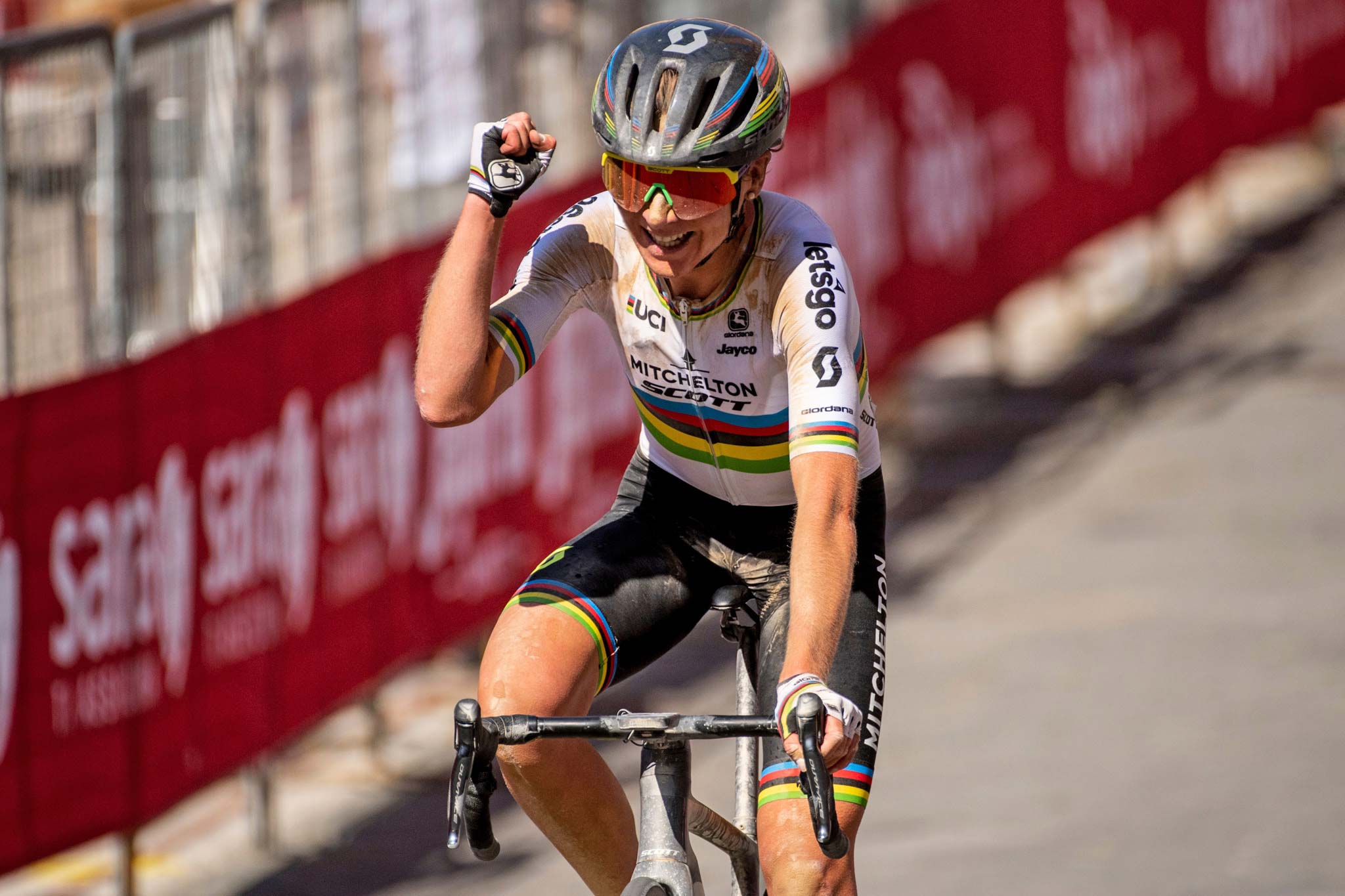 “I was lucky enough to attend Strade Bianche, the first WorldTour race since the lockdown was eased, and to see the manner in which she won the race is just absolutely incredible.” Darach McQuaid. (Photo: RCS)

RIDE Media: Given that you brought it up, I’m going to ask you to extend on it – if you don’t mind, and I know it’s early in your morning – but Annemiek van Vleuten has just been phenomenal in 2020, in a very interrupted year. She finally got beaten, but she seemed to win every other race that she entered. Could you just offer a little overview of that whole program and her impact on world cycling at the moment?

Darach McQuaid: “Well, not only is she the reigning world road race champion but she is just an inspiration for all of the rest of her team-mates and the rest of the girls in the peloton.

“Earlier this year, before COVID-19 and lockdown, we had a training camp in Sicily and she was training with the guys, and she is just so impressive in how she applies her work, and her dedication to her job. That, obviously, shows in the results and she’s obviously a super person as well.

“We’re so lucky to have a champion like Annemiek in the squad and see her not just win races, but the manner in which she wins the races.

“I was lucky enough to attend Strade Bianche, the first WorldTour race since the lockdown was eased, and to see the manner in which she won the race is just absolutely incredible.

“It’s great for the other girls in our team because she’s such an inspirational character and she raises everybody’s game.

“Even in Nice on Saturday, seeing how excited the guys were while watching her racing… she’s kind of transformational and inspirational, so it’s great to have her as part of the team.”

RIDE Media: Clearly, we could go in many tangents but, given the news overnight, I’ll maybe conclude this interview, if we could, with a little reference to the signing of Michael Matthews for next year. It’s an interesting one; it sort of came out of the blue…? Or did it? Has that been a work in progress? Can you explain that one?

Darach McQuaid: “Yeah. I think it’s out of the blue for you guys but a work in progress for ourselves.

“Gerry gave us instructions over the summer. I think we all knew it was going to be a very active rider marketplace, so we got in contact with Michael. And to see him come back to the team after the amazing years he had in the team previously is just a massive step forward for the team.

“We’re really excited. I think he’s going to complement the leadership of Simon [Yates], because obviously they’re not the same type of rider. So, it’s going to mean that we’re hopefully in the cycling headlines on a regular basis throughout the whole year and we’re very excited to see what we can do with Michael in the next couple of years.”

RIDE Media: I said that would conclude the interview, but… if [you] don’t mind taking one more minute just to talk about the absence of Australians on the Mitchelton-Scott roster this year at the Tour de France. It is a bit of a talking point. Could you explain that, just so we understand the team’s logic…?

Darach McQuaid: “A lot of it was down to form and racing calendar.

“The calendar is not like it ever was before, this racing calendar we’re currently in. I mean, we’ve got riders doing the Tour de France with a very small block of racing. And, really it was down to who has got the form and who would have form in October for the Giro…

RIDE Media: I understand all of that. And you understand why people are a little concerned; they’d love to see some people like Jack Haig, who is in flying form…

“I think us signing Michael Matthews is the best answer possible for anybody who is naturally disappointed that there are no Australians in this [Tour] squad this year. The Australian flag is still very much on the team car and we still fly the flag for Australia at all times.”

RIDE Media: Understand. Excuse me, I had a phone call interruption, but I got all of what you had to say and it has been really good to have a little overview of you in a new role for Australian cycling and thanks for taking the time to have a chat at a busy time.