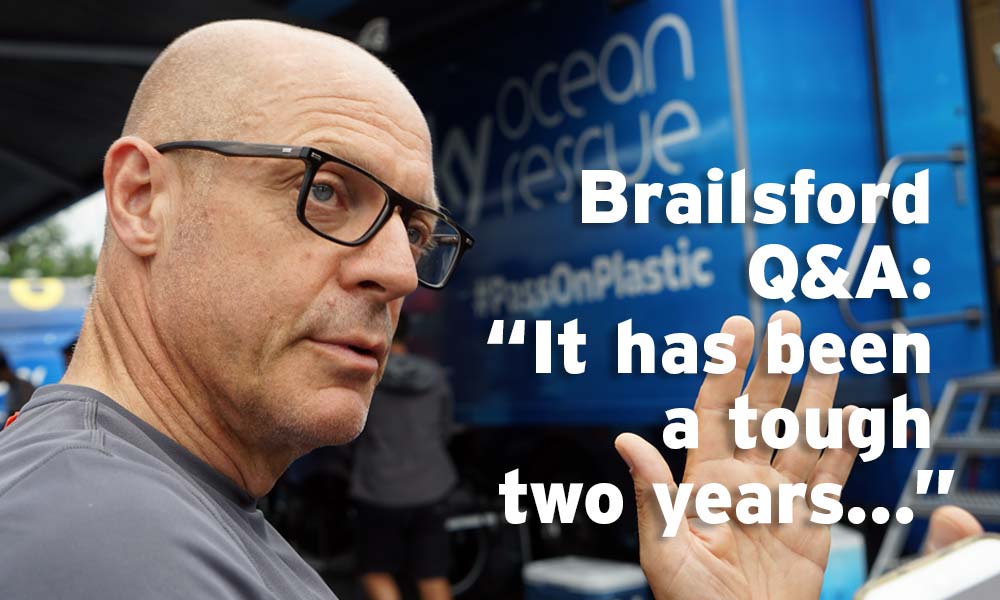 David Brailsford Q&A: “It’s trying at times but I enjoy it”

With Luke Rowe warming up in the background and Geraint Thomas having just departed to have a look at the TT course of stage 20, RIDE Media caught up with Team Sky’s principal, Sir Dave Brailsford to ask a few questions…

There is always a flurry of activity around the Team Sky bus. Even if there’s no crowd – of media or fans… or both – there is still plenty going on. The wealth of support staff are milling around fussing about with bikes or the line-up of Wahoo Kickr trainers or just pacing about making sure that all the minor details are being managed as best they can be.

On the morning of the TT from Saint-Pée-sure-Nivelle to Espelette on the final Saturday of the 2018 Tour de France it was perhaps more intense. It’s not quite like there was a pile of finger nails amassing on the ground but there was clearly considerable tension.

They have come this far and done all things right for three weeks and from the level of anxiety in the air it was obvious that no one was willing to relax, not just yet. There was still 31km of racing against the clock for Geraint Thomas to do before he knows if he is going to win the race.

Despite the tension, Dave Brailsford was out the front of the bus, taking questions from a line of journalists who patiently waited while the Welshman offered his usual long, sometimes eclectic responses to the queries issued in a range of languages.

RIDE Media was in the queue and although a couple of journalists from L’Equipe were next in line, Brailsford took some times to answer a few queries about the team, about the wealth of talent on offer, and about whether or not he enjoys what is clearly a high-pressure job.

Of course, you’d always like to ask more but we took the time allotted and below you can read how Brailsford responded…

– Click the SoundCloud file to listen to the interview with Brailsford and/or read the transcript below. –

Click the SoundCloud file (above) to listen to the interview with Dave Brailsford before the TT of stage 20 at the 2018 Tour de France.

RIDE: David, we’re on the eve of what’s going to be another big party in Paris but I think this one is more special because of the Welsh connection for you, or not?

David Brailsford: “Well obviously you wouldn’t expect to say anything else other than that we’ve got to get the job done first, you know? But should it go alright today then, you know the Welsh know how to sing, and they know how to drink. They are the two things that they do very, very well and I’m sure they’ll be combining both if we do get to Paris tomorrow [with the yellow jersey].”

I put a question to G yesterday [about] the fact that he has done plenty of press conferences since stage 11. I, in fact, asked the only doping question. It’s a complete contrast to Wiggins and Froome, isn’t it? Is it because of G’s clean reputation, because of…? What do you put that down to – why there’s been no question at all?

Brailsford: “I don’t know, you’d have to ask the people asking the questions, I guess.

“I think the think about Geraint [is]you’re not going to find many people who have got a bad word to say about him. I think he’s genuine… he’s renowned for being a grafter, as being a worker.

“Ever since he was young [when] he joined the British cycling program and he brought in. He absolutely, 100 percent, brought in to the coaching – to everything. And he committed and he worked very, very hard at squeezing every last drop out of himself.

“Then, over the years, he’s stuck with it.

“When he’s had his setbacks or it hasn’t quite worked for him, he’s never given up. He’s never changed anything or said, ‘Okay, I’m not going to buy in anymore…’ He’s stayed bought in and he’s got his just rewards.” 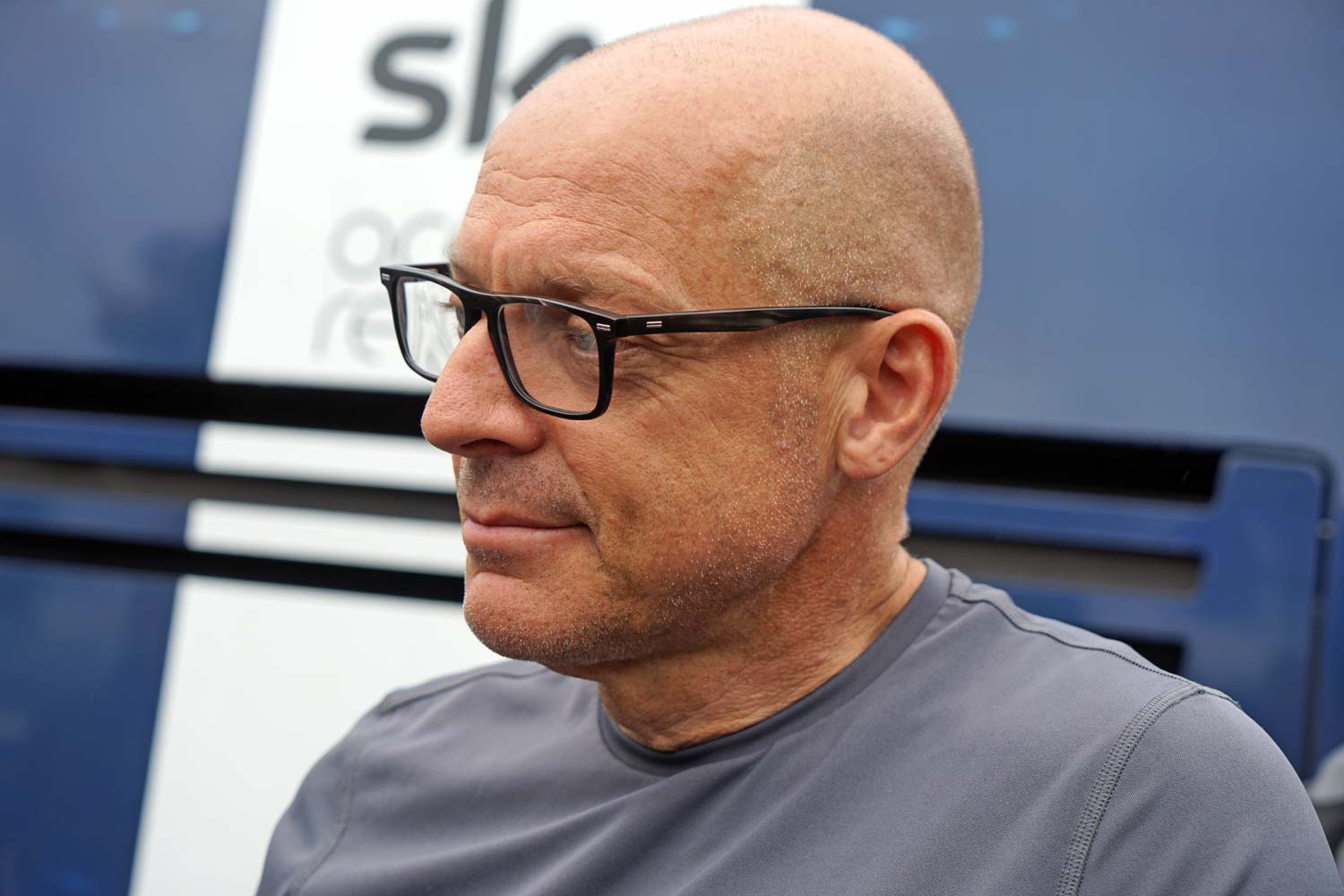 You’ve turned pursuiters into Tour champions. Is there another one on the agenda or are you now going to look to Egan Bernal as the successor? How is the future of Team Sky?

Brailsford: “I think Geraint, to be fair, was a road racer who became a pursuiter and went back to road racing. I don’t think he was a pursuiter first and foremost.

“You know, he’s very good at pursuiting – whereas many Bradley was a pursuiter who turned to road racing.

“I think in Egan we’ve got a young talent and it’s exciting.

“And I said, ‘You’ve got two guys here [Thomas and Froome] and I want you to watch them like a hawk today, because not many people get the opportunity to learn from these guys.’

“So, whilst on the one hand we’ve got Geraint and Chris riding for the podium and trying to get a big performance, on the other hand – as long as you give it a bit of attention – you couldn’t get a better learning environment for a young guy like Egan to be in at the minute, to try and get himto perform in the future.

“And I’m excited by it, I must say. I genuinely am excited about having [Egan on the roster].

“He’s a prodigious talent and then the big question is: can he take that and kind of translate that into a winning performance?”

How does that sit in the Team Sky infrastructure, where it is such a team with British heritage but you’ve got a cosmopolitan cast? Can you imagine a Colombian winning the Tour for Team Sky?

Brailsford: “Yeah, yeah, yeah. I don’t think a Colombian has won a Tour, have they?

“I mean, Nairo has won the Giro and the Vuelta so I think those Grand Tours have been won by a Colombian…. But I don’t think a Colombian has won [the Tour]. So why couldn’t we be the first team to have a Colombian win the Tour de France – that’d be pretty good fun.

“So, you know… that’s probably where we’ll be heading.” 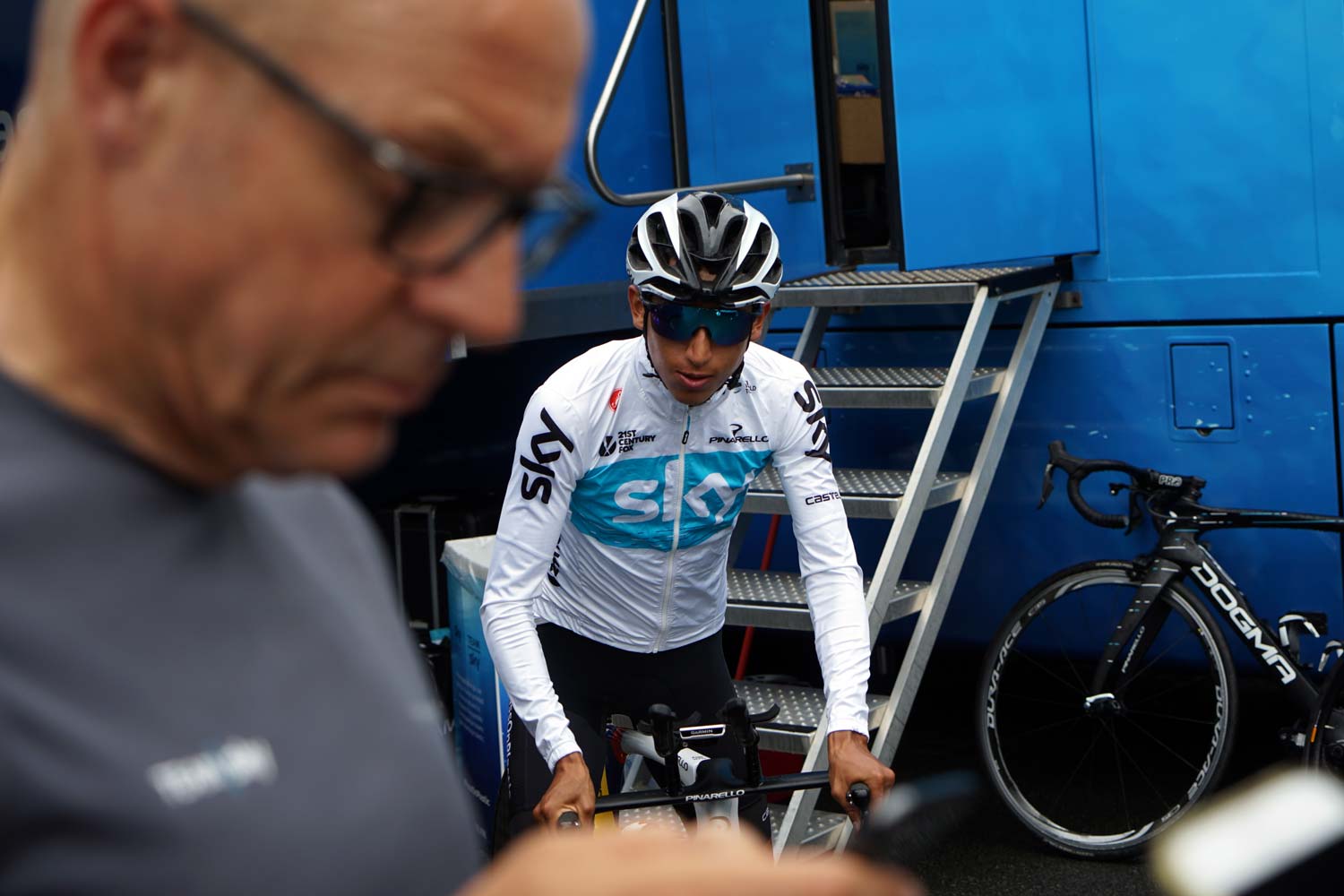 Egan Bernal, in the background, was about to set off for a warm-up on the TT course (above).

Just the last question because you’ve got L’Equipe waiting [for their turn], but I just wonder: it was, more or less, 10 years ago that this journey began. You’ve been through a lot. You’ve enjoyed a lot of highs but also significant lows. There’s been a lot of, let’s call it vitriol. It’s a word we don’t like to use but it exists. And you’ve come through it. Do you enjoy it? Or is it just a mission? An assignment? When does it stop for Dave Brailsford?

Brailsford: “That’s a good question actually. I think what people maybe don’t realise is that… well, a lot of people come to watch what we do in this environment but for us it is like the height of intense competition…

“In that flight/fight/freeze kind of reaction, my instinct is to fight in a competitive environment. And when we’re in this, we’re not thinking about anything else other than how we’re going to win.

“It’s like a three week [fight]… it’s pretty intense. And so you kind of go into this mental place, really, which can be pretty hard. It’s a lot of suffering and a lot of intensity but it’s got some great aspects to it as well.

“One of the one things I try and do is… we’re only here to try and support these guys (he says, gesturing to the riders warming up in the background) to try and win, and allow them to move their careers on. And I think if you keep thinking of it in that sense; of like, ‘What is my behaviour?’ ‘What am I trying to do – is it promoting other people? The riders? Moving their careers forward?’ And I think about that quite a lot…

“I think a lot of people can do ‘performance’, just coming and perform. Or, in sport, perform.

“Then you’ve got this kind of medium ground, I’d say, which is like high performance – where you’re doing it pretty well.

“And then you’ve got optimal performance where it’s the best people can be. And that’s hard!

“If you go for the optimal one and try and keep replicating that, that’s intense… I’m not sure if it’s a good thing or not – but the environments that I’ve always been in and around in teams are pretty intense environments. There’s no lying about that.

“If you go and play for Real Madrid or go and play for Barcelona or Man United or you ride for Team Sky, it’s intense. In that locker room, it’s not going to be easy and it’s the same here.

“But do I enjoy it? It’s been a tough two years, I’m not going to lie.

“It’s been a very, very difficult two years on a personal level but I think I’m pretty resilient. I keep my eye on the ball. And I’m very clear in my mind – I’ve got a very clear conscience with everything that’s been thrown at it.

“I’m very, very happy on that side of things… it’s trying at times but in the main, I enjoy it.” 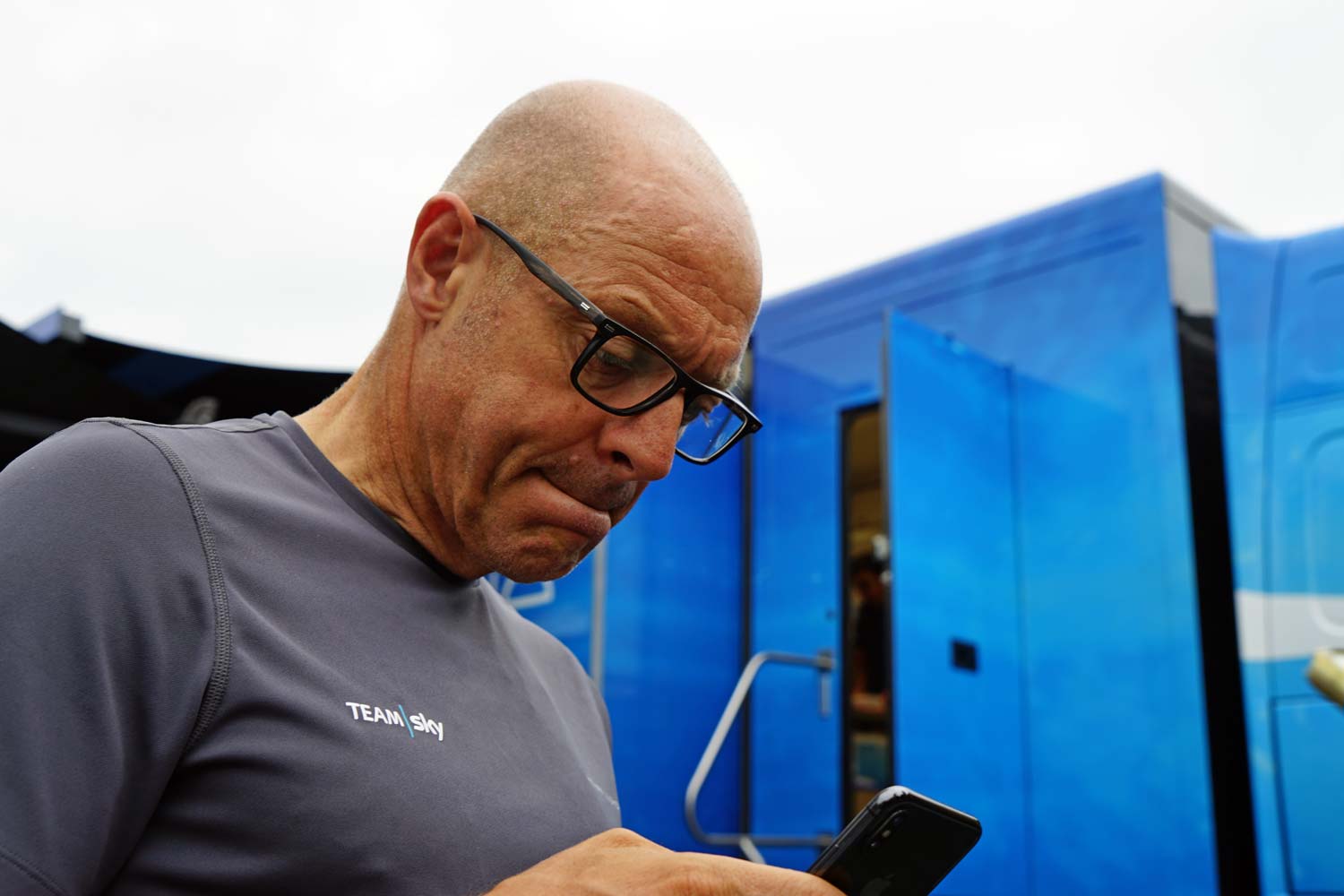