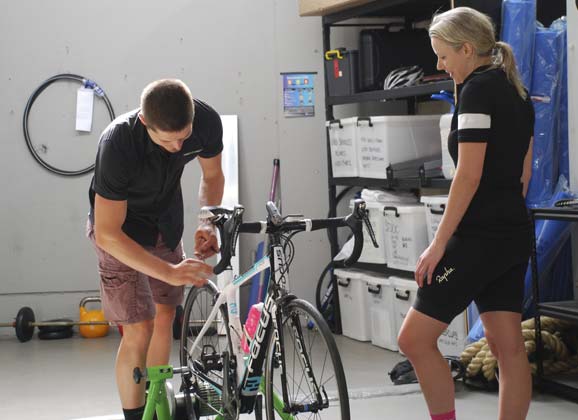 Fitting bike to rider by The Body Mechanic

In Australia the days are getting longer and warmer. The international racing season may have come to an end but there are more and more organised rides in our country every year. There is a veritable fest of events to choose from; some long and arduous, some short and family orientated, some for charity, some for a challenge… and all designed so that the participants can experience the joy of cycling.

All this adds up to new cyclists emerging – braving the streets and realising what pleasure the simple act of pedalling can offer.

It can be daunting but there are many businesses popping up that help make the life of a beginner cyclist less stressful, more enjoyable… and, ideally, also more efficient. 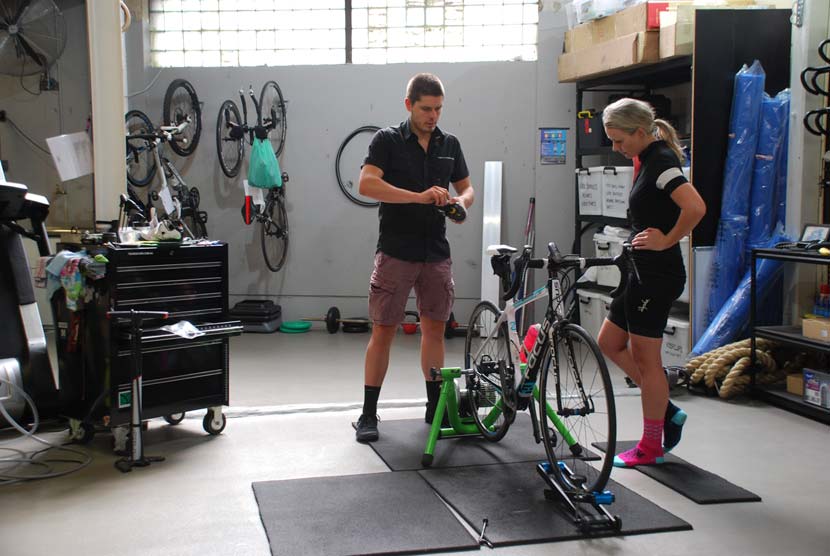 In the past RIDE has published features about the variety of ways that cycling helps build community. The local bike shop is a great place to learn. To some it becomes ‘The Third Space’ – that place where you can go that’s not work, not home, but you feel welcome and find contentment as well as conversation.

The coffee shop is another site of traditional cyclist gatherings – that’s why we’ve featured ‘Caffeine Culture’ in the magazine for so many years.

But there are now other hubs that combine many elements of the cycling life and bring it all into one place. In the coming weeks we’ll profile some of these places around the country and share the experiences of the customers, the hopes and ambitions of the proprietors, and explain the ways that the bike helps bring people together while making them feel better about themselves. 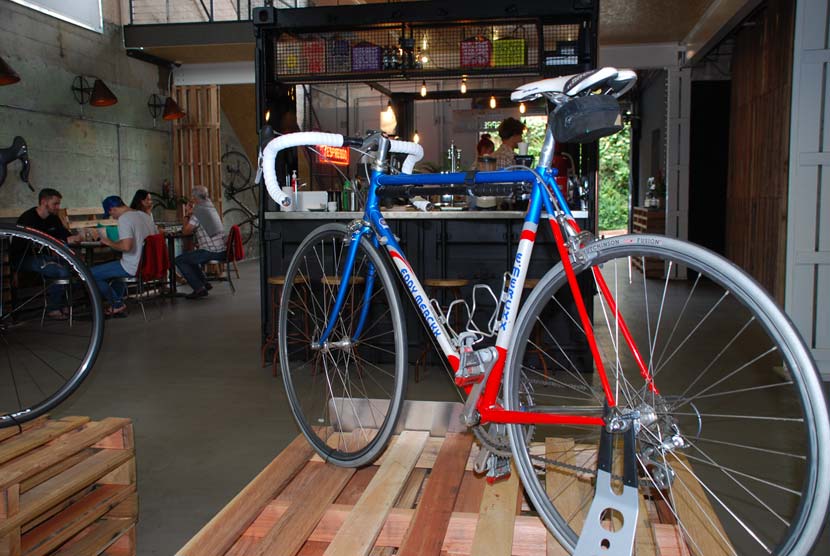 The first stop on this series is in Sydney. Two businesses have opted to share a common space literally tucked in underneath the Harbour Bridge: The Body Mechanic and Bay 10 Espresso offer bike fitting, physio consultations, mechanical work, great food and, of course, coffee… great coffee.

Nestled on what is a one-way street (for cars, not bikes) in the short stretch between Milsons Point and North Sydney stations, on the western side of the Harbour Bridge, is an opening to what was once a rather neglected space in the middle of the city. Venture inside the big doors now and you’ll find a little patch of cycling nirvana. 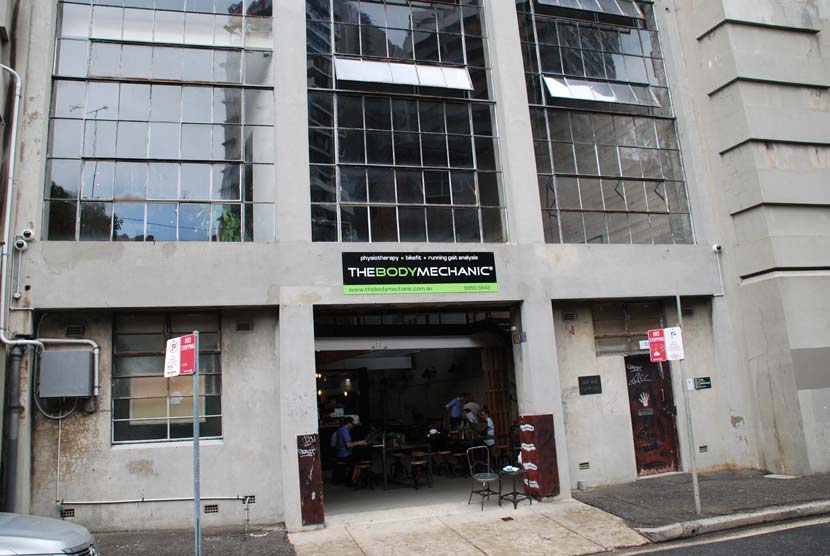 During RIDE’s visit, Kate Johnson was being fitted to a Focus bike she bought only six months earlier. She has come to cycling because friends of hers rode. “I’ve always liked doing exercise and playing sport,” she explained about what got her into the idea of trying cycling. “I was chatting to friends and hearing about their love of it so I just decided to give it a go.

“It’s been so addictive from the get go.

“People are so friendly within the Sydney cycling community, particularly with the women.”

Within eight weeks of riding, Johnson had completed the Rapha 100. And in the next little while she’ll set off for New Zealand to take on the Lake Taupo Challenge. It’s all come from the fact that her experiences thus far on the bike have been good ones. 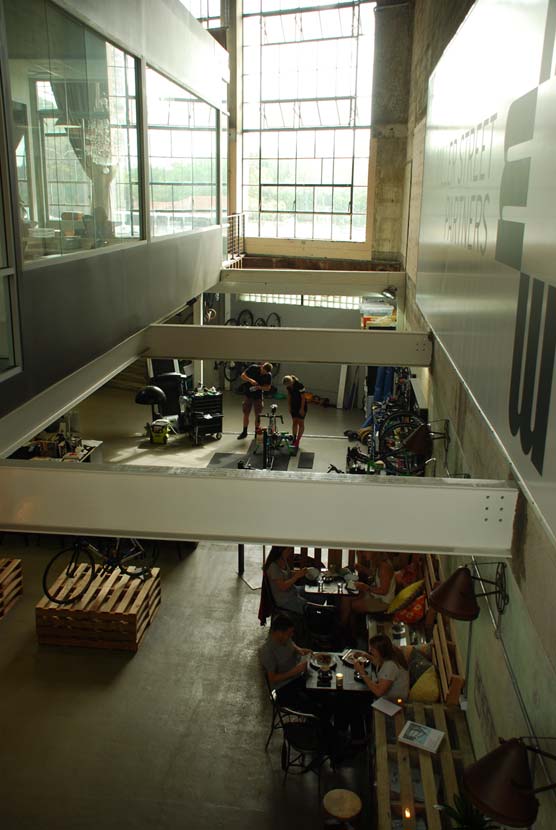 “I just started off doing short rides but I’ve joined SCC (Sydney Cycling Club) so I’ve gone away on the Hunter Valley tour already and I’m going to the Kangaroo Valley ride in a couple of weeks.”

Still, she had done all that riding a bike that had been set up upon the sale of her bike six months ago. And only recently did she decide to see if she might be able to find a better position. “On longer rides I was getting a few little niggles in my triceps and I noticed that my knees were coming up quite high in comparison to other people,” said Johnson about her riding. And that’s when Ric Austen from The Body Mechanic comes into the picture.

Within hours of a session with Austen, Johnson said she believed she’s improved her riding. “I think I’ve been able to fix that and hopefully I’ll be a little more comfortable when I’m doing the longer endurance rides.” 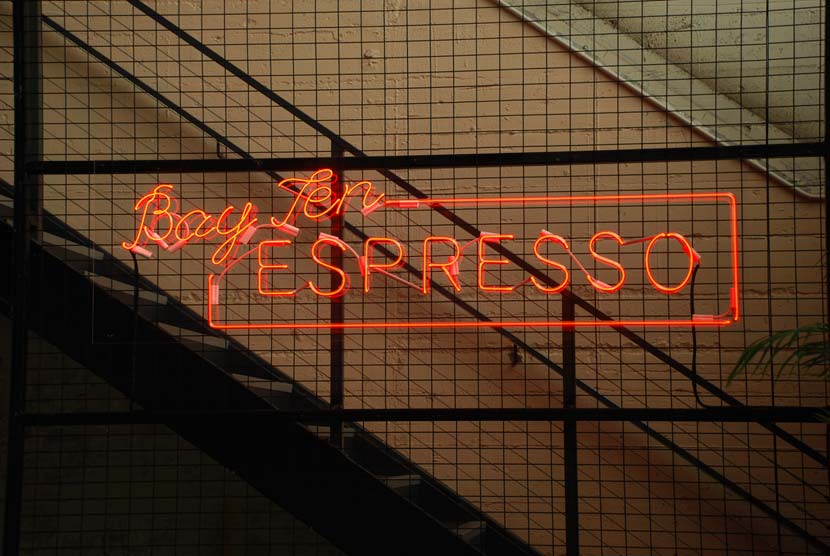 So, I asked Kate Johnson, what went on during the morning fitting session? She takes up the story…

“Ric took me in and he got me to walk on the spot, jump, and do a whole lot of exercises and he watched my body position to gauge how it responded and where my strengths and weaknesses lie before I got on the bike. He wanted to see what he could help me with. He wanted to fit me properly to the bike.

“He got a physio to come along and help me with four exercises which I have to take away – two before I go riding and two afterwards – to help build strength.

“Then Ric put me on the bike and he adjusted quite a few things actually – I was surprised how much he had to do. He put my seat up two centimetres and put it forward, he moved my cleat position, and also adjusted my handlebars. He put everything a bit forward so it’s easier for me to grab on to; it gives me greater control when I’m cycling.

“I felt like it was very thorough. He videoed me at each point as he was changing each thing so I could see the difference that it made. That was really good because I don’t usually visualise myself on the bike.

“I was able to see what I was doing right and wrong and that was really good.”

All that, I joked, seems better than a cursory glance in a shop window as you’re riding by. “Yeah, exactly. And I guess it makes you a little more conscious of how you’re moving as well.”

The session lasted over two hours and cost Johnson $350 and, she added, “You also get a follow-up appointment and I got $30 off with my health fund because of the physio element.”

While watching the fitting unfold, it seemed like there was a good rapport between Johnson and Austen. In an instance like that, one might feel like they’re being lectured a little but it didn’t appear that way at The Body Mechanic. “Ric was great. He was very approachable and the way he explains things is good, it’s in layman’s terms so I could understand it all. It wasn’t too technical.”

“He’s got such a good nature and a way of explaining things. He made me feel comfortable. He didn’t make me feel like I’m a beginner. He treated me really well as a client.”

(If you have a suggestion about a space that’s created to combine cycling with other aspects of modern life, please contact RIDE Media and let us know where it is!) 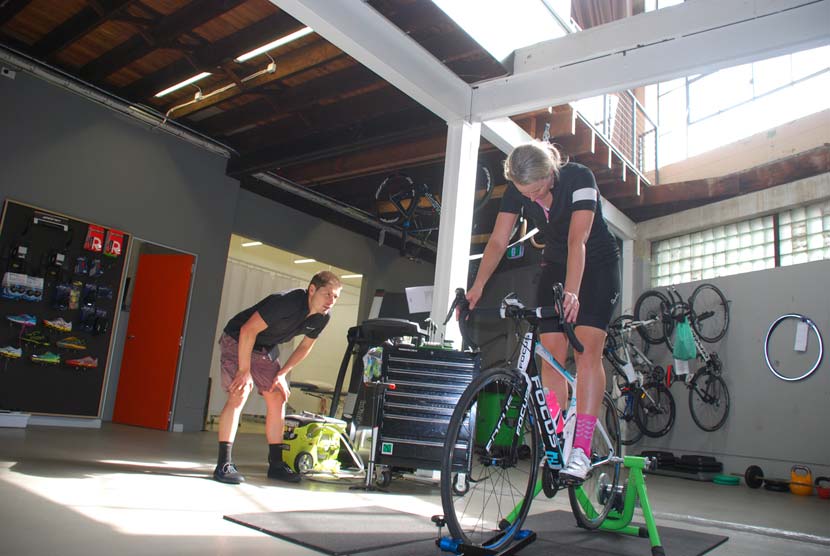