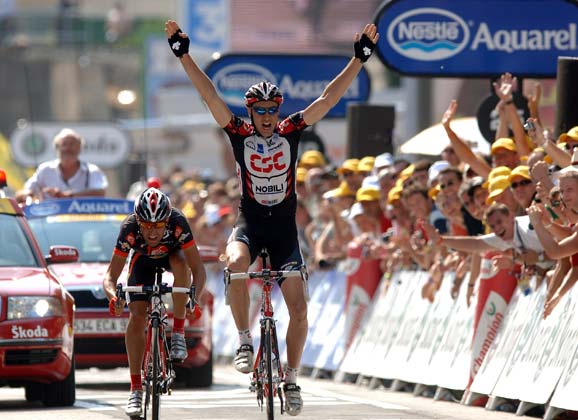 It happens quite often at RIDE HQ: while searching for something in our archives, we stumble upon something else entirely… and although there’s not necessarily any relevant reason to share it, the compulsion comes simply because it’s something fun or interesting about cycling from the past. This audio file from the 2006 Tour de France came up on shuffle yesterday and the sentiment of The Jensie made us giggle in the office… he’d just won the 13th stage after being in a day-long breakaway group. One-by-one all the challengers from his group would fall by the wayside until only Oscar Pereiro remained. The Spaniard would go on to (eventually) be crowned champion of that year’s Tour, but the German would throw the victory salute in Montelimar.

“It’s great. You cannot believe how great I feel. I’m actually not tired at all. I’m just so happy I could just go back on my bike and ride the stage backwards.”

“We were almost desperately looking for something like that. We were hoping in the time trial. We were trying in the mountains. It was my fifth try in a breakaway today – I was four times before in breakaways – and today just everything fell in line for me. It worked like clockwork. I had good legs today even though I left a lot of energy yesterday in the breakaway… tactically it worked out perfectly in the end.”