From the Beechworth bunch: Charlie 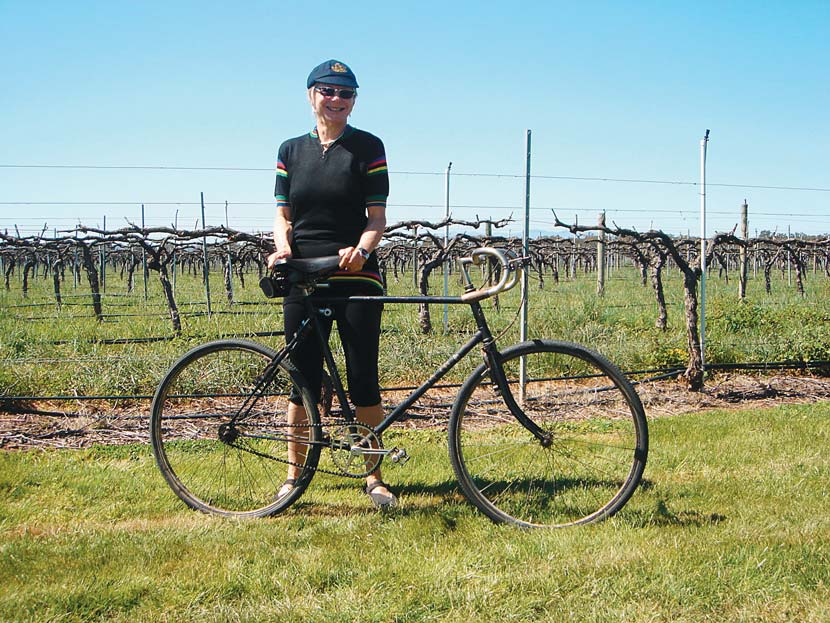 The bike: “It’s called The Barb and it’s a Melbourne made sprung-frame bike that was produced by the Finley brothers who had a shop in Elizabeth Street. This is a bike from around the 1930s. It is immensely comfortable and it has V-shape brakes which impress me because of how efficient they are. It’s a fixed gear bike and this made things quite interesting. There were a few pinches where I had to jump off and walk up during the L’Eroica ride.

“We have quite a collection of bikes but I only decided to take part in the event the night before. I pumped up the tyres, saw a few cracks on the sidewalls and never thought it would make the distance, but it did and it was wonderful.

“I have ridden all sorts of bikes. The previous weekend I was on a penny-farthing. I also own a carbon-fibre Trek… and I’ve ridden just about everything in between. This bike is classy; it’s beautiful and is thoroughly enjoyable to ride even on the rough terrain that we rode over near Beechworth. Once you come to terms with the fact that you can’t change gears and that you can’t stop pedalling, it is quite fun.

“Behind the saddle is the suspension and if I was more technical, I could give more detail. It certainly took out a fair amount of the road shock.”

The groupset: “It has a Chater-Lea crankset and the brakes are Gem. They are very elegant as most early designs were; prettier is what I’d call them. Many fixed gear bikes have pegs on the forks so that, when you’re going downhill, you can take you feet off the pedals and rest them somewhere safe. I was forced to put my feet on the down tube instead.”

Kilometre count: “In a week, I’d ride a couple of hundred kilometres. It’s pretty constant and it’s a mix of riding for transport, belting down Beach Road on a tandem, and tourism. We never travel without a bike. I ride a bike because I’m lazy and it’s much easier to do than walking. Plus, I like eating and the more I ride, the more I can eat.”

Good points: “It’s elegant and comfortable. The cables are internal so it’s a stylish bike and it has a sprung frame. It has comfort, style and, with a little bit of pushing, speed. Aren’t these all the requirements that a cyclist wants?”

Bad points: “Well, you can’t be lazy with a fixed wheel. It bucks if you try to stop pedalling. And the single speed means that you’re working pretty hard if the going gets steep – either going up or down.”

Miscellaneous: “I’m immersed in bicycles one way or another. I’ve been president of Bicycle Victoria and the Bicycle Federation of Australia. If you could summarise my involvement, it’s best to say that I have so much enjoyment from having bicycles be part of my life and I’m really interested in getting people to ride.

“I started riding when I was a teenager in London. I belonged to the Cyclist Touring Club which meant that, at weekends, you would go out and tour. I graduated to motorbikes and a car but when I came to Australia, I was loaned a bike and my passion for riding took off again. I started exploring Victoria by bike. It’s a wonderful state to get around on bike because it has great scenery and terrain. I was part of the group that started the Great Victorian Bike Ride and I’m responsible for the Around The Bay In A Day.”