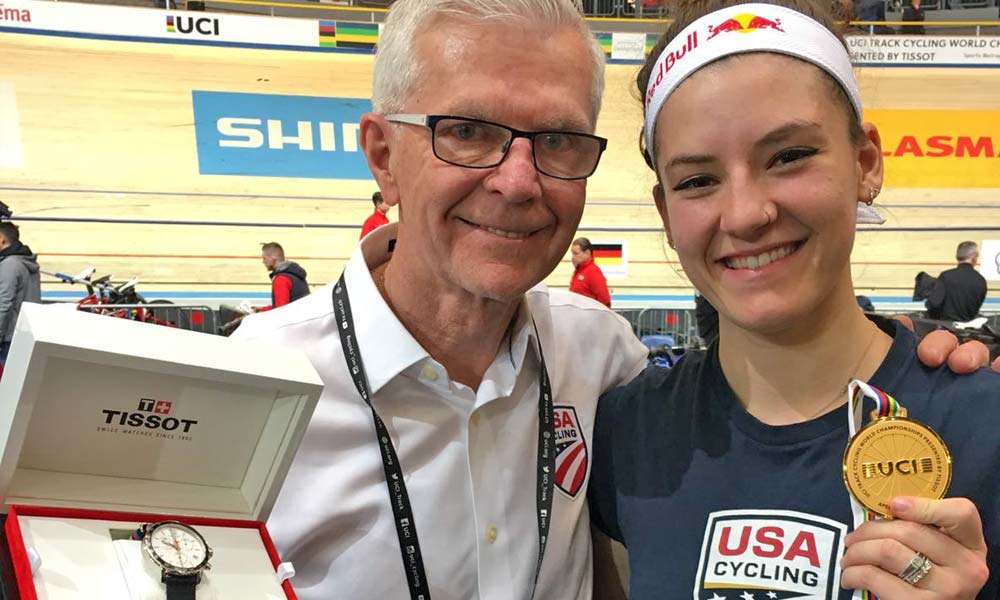 There were a couple of world records set at the 2018 track world championships, both of them in the 3,000m individual pursuit, both by the same rider – once in qualifying (3:20.072), once in the final (3:20.060). Chloé Dygert not only successfully defended her titles: first in the individual pursuit, first in the team pursuit… she also took over two seconds off the previous fastest time ever ridden.

“She is an incredible athlete,” said her Australian coach, Gary Sutton, who has been working for USA Cycling since the latter part of 2017.

“In all honesty, we were probably expecting a 3:18.

“Going into the world championships she was in great form in the training camp and if you interviewed Chloé, she would tell you that she was ‘a little disappointed’ with that time – but she broke the world record twice.”

The 21-year-old has one of the largest collections of rainbow jerseys for any current rider: five from the track (3x team pursuit, 2x individual pursuit) plus a couple from the junior ranks when she won the worlds in Richmond in 2015, both road race and time trial. Not only is she fast, but she’s consistent and her powers of recovery have impressed Sutton enormously.

“She had done an enormous workload before the individual pursuit, with three rides in the team pursuit – and I actually think that took the edge off her a little bit,” admitted the coach, “but I was really pleased with the way she backed up.

“She rode the team pursuits to perfection.” 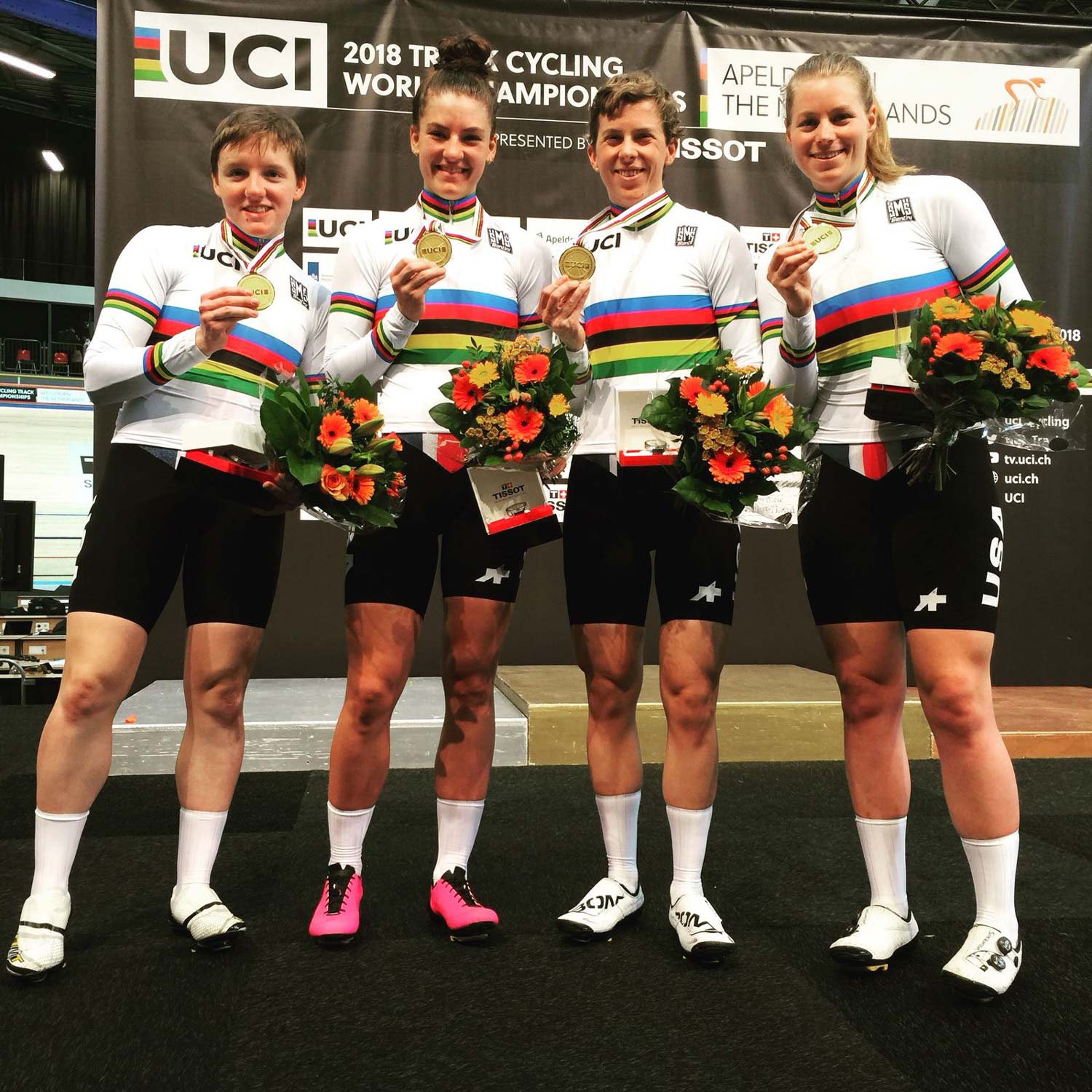 On the track it’s all on display. You see it all and, if you know the gearing, it’s possible to almost calculate what kind of power is required to achieve a 3:20 in a 3,000m race. But Sutton doesn’t want to divulge all the information he has at his disposal.

“I won’t share the numbers, that’s the first thing I’ll tell you,” replied Sutton when asked if he could explain wattage for the world record rides. “But I will tell you her power is incredible!

“It’s blown me away. I didn’t realise how good she was until I arrived in the States but what she was doing in training was even more impressive than her output at the worlds.”

She’s talented and committed and well supported. Her career is only just beginning and Dygert’s results from her formative years remind us that USA Cycling has found the next big superstar – it’s just that she’s humble enough to almost fly under the radar of international media scrutiny.

She should be lauded as she’s one of the most consistent performers at the highest level since joining the elite ranks. Considering her accomplishments, her social media following could be huge… but it’s not. By Tokyo, however, we can expect the numbers to have grown significantly. Amongst those in the know, there’s plenty of admiration for this young woman who has become quite a bike rider.

Sutton can’t say a bad thing about this classy cyclist who stepped off the podium in Apeldoorn and duly handed over a gift to her coach.

“She gave me her world championship watch,” he gushes a little over a week later. His face is beaming as he tells the story on FaceTime after returning to his relatively new US base in Colorado Springs. When he now checks the time, Sutton will be reminded of the first gold medals for the US team that he was associated with and the gesture means a lot to him. 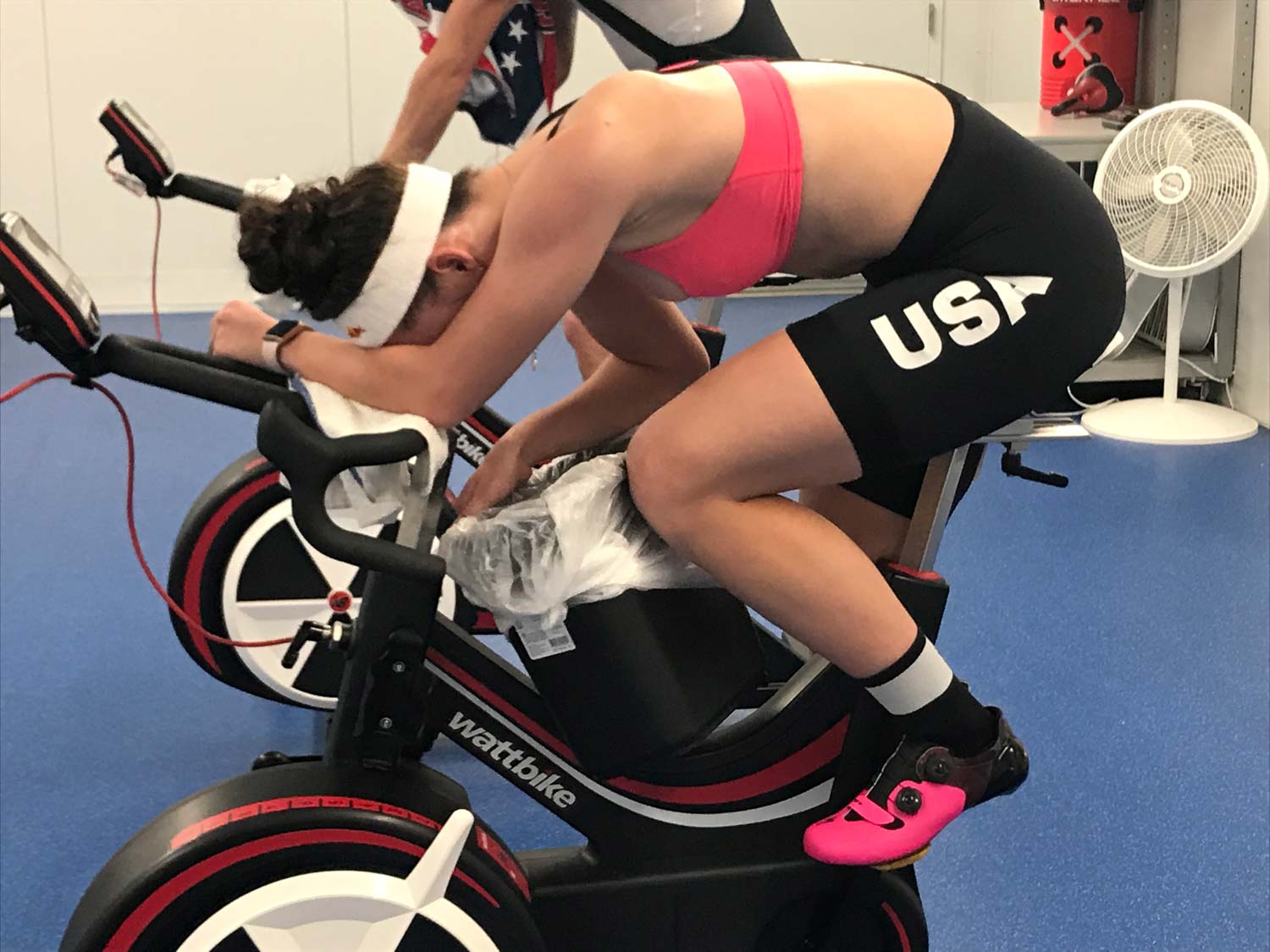 Dygert determination… keep on riding, past the nausea and onto the podium.

No government funding for the US federation

Gary Sutton was a gift to USA Cycling, and he was essentially presented to the Americans by Cycling Australia’s high performance manager, Simon Jones.

Jones was one of a small contingent of Australians at the worlds and he crossed paths with Sutton at the velodrome in Apeldoorn. They exchanged a few words but it’s not exactly the kind of relationship that will see them going out for a beer together once the racing is over.

The Brit arrived in Australia a little over a year ago to take on the role and one of his first controversial decisions – and certainly not his last – was to let Sutton know that his contract as coach of the women’s endurance track program would not be renewed. And lo, the offers started flowing in for ‘Sutto’.

If he wasn’t welcome as part of Cycling Australia’s coaching staff, there was a line-up of other countries that were happy to try and procure his services. He was approached by federations all over the world before finally agreeing to join USA Cycling in a similar role as what he’d held with the Australian cycling team for many years.

After his first major championships with the US team, Dygert and her cohort made it a successful experience. Two gold medals, two world records… a new watch and a good outcome for a nation that tends to ebb and flow when it comes to track racing.

While Jones and his cohort in Australia are propped up with funding from the Australian Sports Commission which effectively manages the government purse strings, Sutton and his new colleagues make do with private donations and no federal backing.

“There’s no government funding for the federation here,” explained Sutton. “It’s all private funding and the support that USA Cycling gets from people who are passionate about the sport is incredible! We are very grateful for that because it does help us run training camps and to try and find more riders who can go on and be part of the Olympic program.” 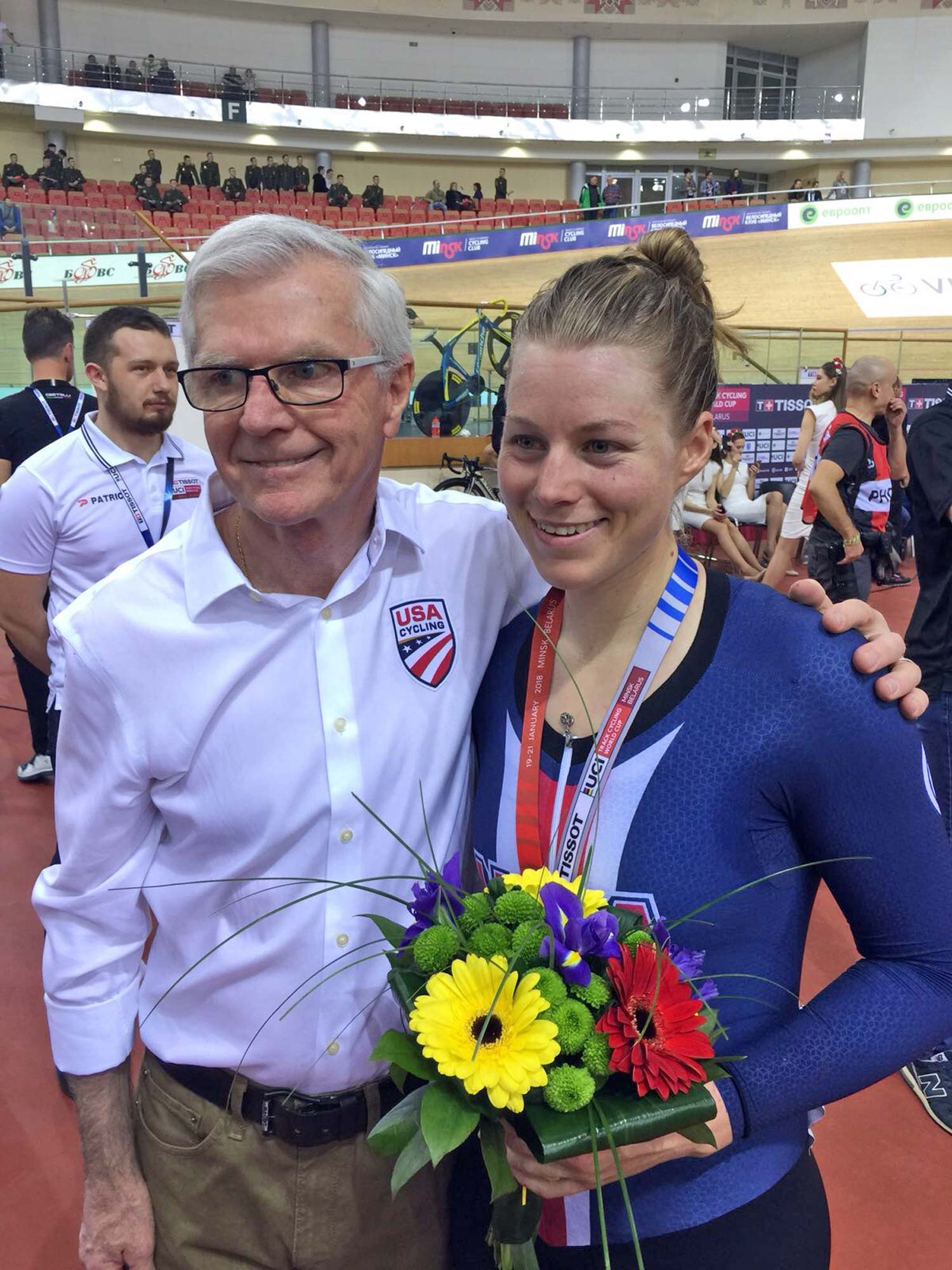 Sutton with Jennifer Valente at the velodrome in Apeldoorn (above).

It’s a new environment and Sutton believes it’s possible to work within the system to create more champions like Dygert and her team-mates who rode to gold in the 4,000m team pursuit in a time of 4:15.669, over a second faster than Olympic champions from Rio, Team GB.

Dygert was joined by Jennifer Valente, Kelly Catlin and Kimberly Geist in the final of the team event and there’s an even greater pool of talent to draw from.

“The sport is enormous in the US. It is a big sport, but America is such a big place. There are athletes here who I probably don’t even have on the radar who are probably capable of putting their hand up for Olympic selection in another year or so.

The system is different to what Sutton had worked with in Australia and rather than state institutes and talent ID programs delivering riders to the velodrome, it’s colleges and coaches who are developing cyclists for the future.

“They got cycling programs in colleges and I’ve received a few emails with some recommendations of riders for the track team. I’ve just got to work through those.” 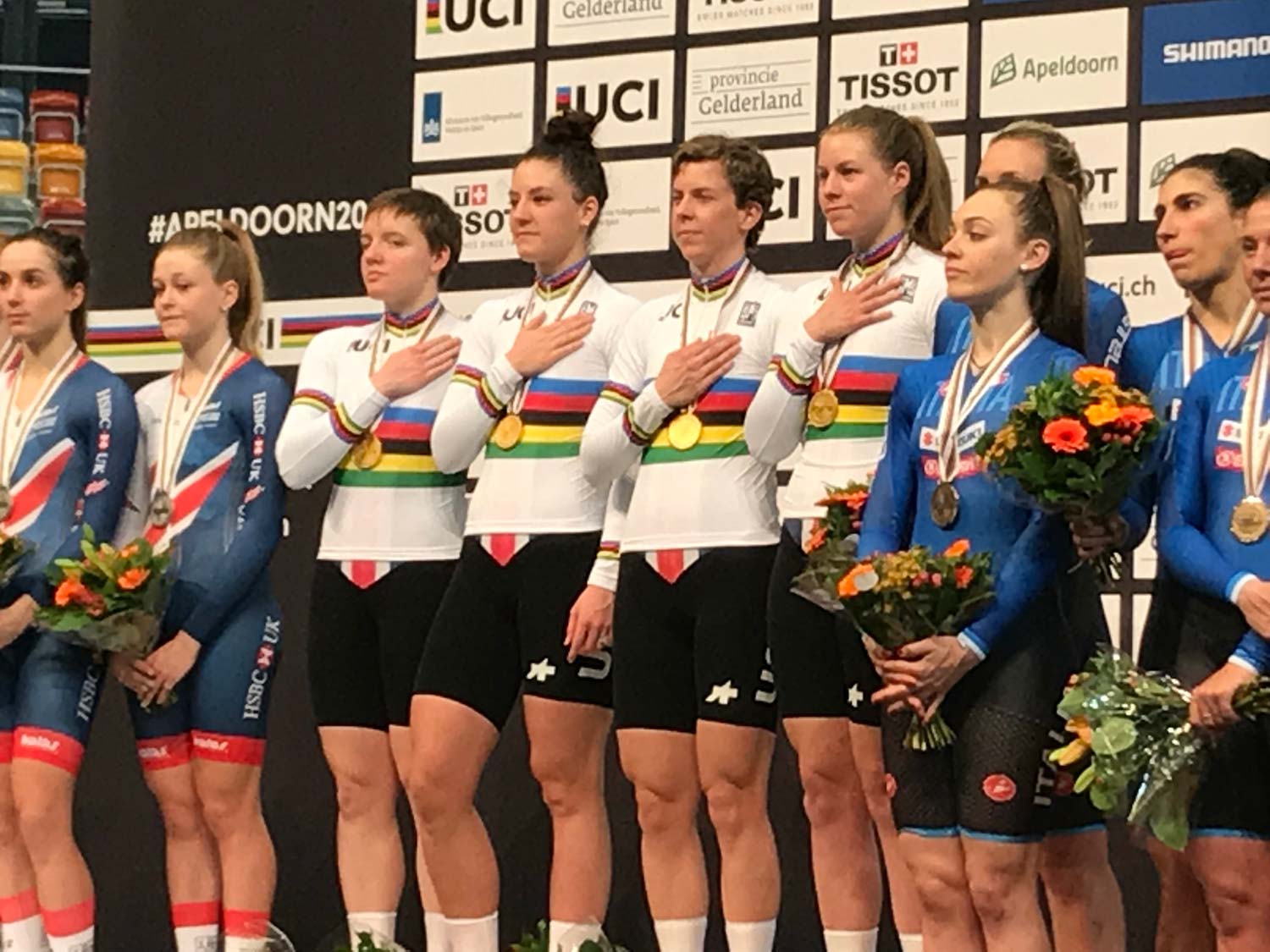 “They were already outstanding athletes when I arrived in the US to take on this job,” said coach, Gary Sutton, “and they carried their performances through to Apeldoorn.”

Sutton receives a warm welcome at every velodrome he turns up at. He has been a popular figure in cycling since the 1970s and 1980s when he was a genuine force on the bike. In Apeldoorn, it was just like old times only he wore a white polo shirt with ‘USA Cycling’ insignia, not the ‘Cycling Australia’ logo that people were accustomed to seeing on him.

He’s not involved in cycling to be popular, but his affable personality means this is a bi-product of his coaching. He may be working for another country – something that seems bizarre considering his love of Australia and Australian cycling – but he remains universally liked and admired.

The Apeldoorn experience was the first international competition for Sutton with the team from USA Cycling and it’s clear that he’s fitting in well.

From Moree to ‘The Shire’ in Sydney’s south to West Beach near Adelaide to Colorado Springs… Sutton has moved around a lot because of cycling. He has a long association with the sport and his enthusiasm never seems to wane. He doesn’t shy away from admitting that he was upset about being pushed out of the Australian program but he’s found a country that respects his history, his coaching methods and his upbeat perspective on life… and cycling.

“I really appreciate that they’ve allowed me to fit into the system and understand my Aussie mentality,” said the Australian coach who now lives in Colorado Springs. “They’ve really accepted me in a nice way and I like their honesty and how upfront they are.”

A strong rivalry has existed in track cycling for many years: Australia vs Team GB, it’s a theme of several Olympic campaigns. And the battles are sure to continue through to Tokyo, Paris and beyond. Perhaps we’ll soon throw USA Cycling into the mix. A few pursuit gold medals certainly raise the spirits and it’ll be fascinating to watch as things develop as we race towards 2020.

“I am here to make a difference, believe me,” concluded Sutton about his tenure with USA Cycling. “I’m on a mission. I’ve always been like that. I’m very motivated and they know that I’m going to give 100 percent.

“What the outcome will be, come Tokyo, we’ll have to wait and see but it won’t be from lack of trying and getting the best out of each athlete in the program.”