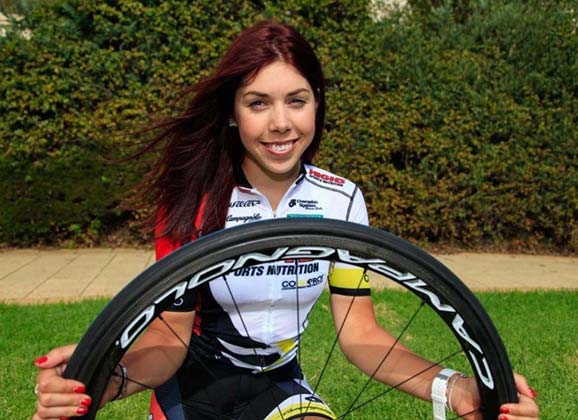 Georgia Baker: from track to road and back again…

And they’re off again: the NRS is back on the road (at last). The Mersey Valley Tour is underway and stage one has been won by… yep, you guessed: Ms Consistency – Bridie O’Donnell.

The former hour record holder celebrated her 42nd birthday by edging out Kate Perry and Miranda Griffiths in the 16.8km TT from Ulverstone to Penguin in the north of Tasmania. 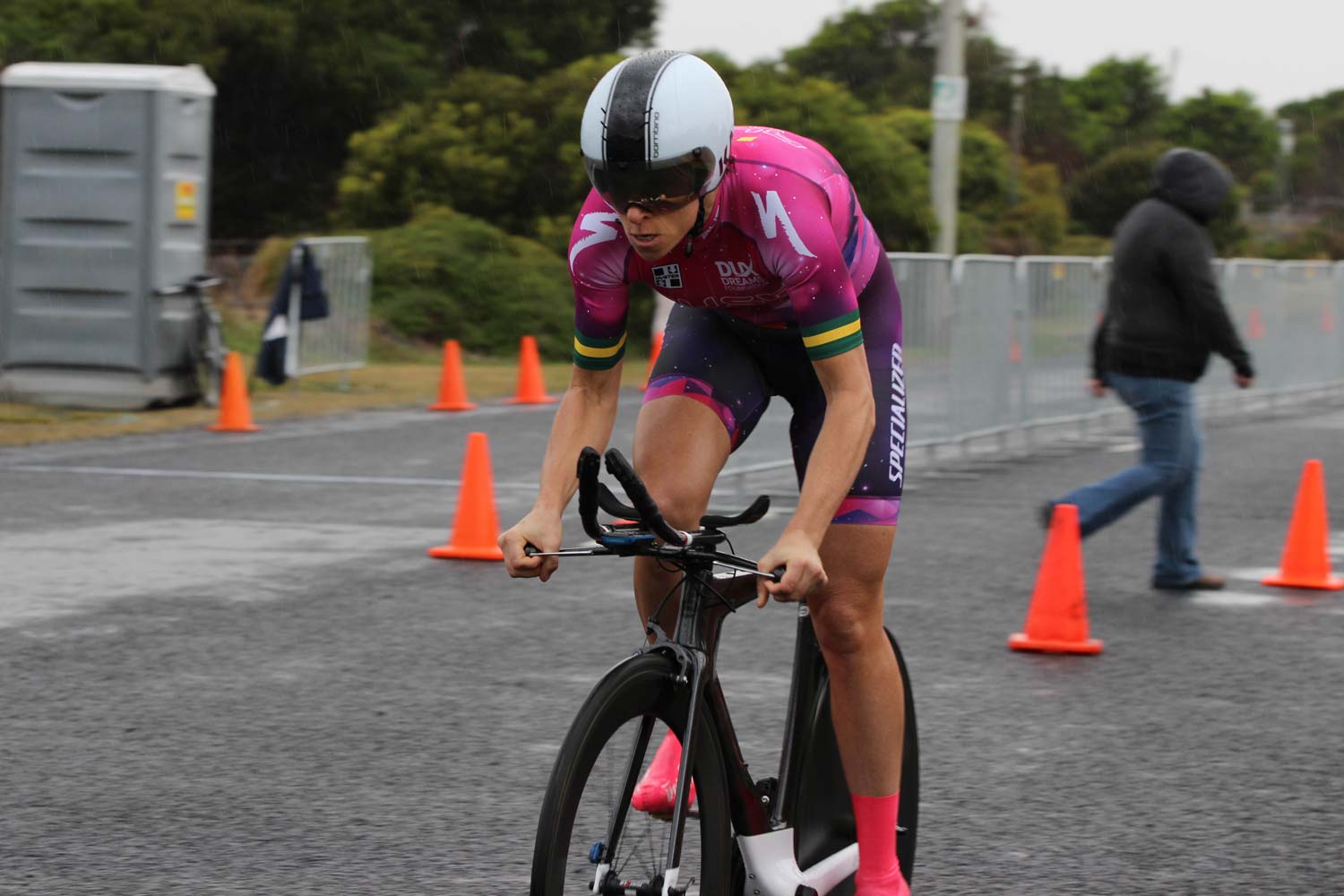 In sixth place was Tasmanian-born and one of Launceston’s favourite cyclists, Georgia Baker. The 21-year-old has taken a brief hiatus from track training, which she hopes will lead her to Rio and a role in the Australian team pursuit formation.

Baker has endured an emotional time recently with her father, Patrick, passing away at the age of 44 last year. She’s lost her “biggest fan” but continues to race her bike with a chorus of cheers from the supportive Tasmanian cycling community. She’s only back in Tassie for a few days and is part of the High5 Dream Team for the Mersey Valley Tour and then it’s back to Adelaide for more Olympic preparation on the track.

RIDE spoke to Georgia after stage one to get her thoughts on switching between disciplines, what her hopes are for the NRS race, and what we can expect from her and her team-mates come the Olympics.

Click the Soundcloud file to listen to the interview with Baker and/or read the transcript below.

RIDE: I’m talking with Georgia Baker just a couple of hours after stage one of the Tour of Mersey Valley, a round of the NRS. The National Road Series is finally underway, again. You got a [sixth] place today in the time trial. How did it feel to be back on the road after months of track work?

Georgia Baker: “It was good to be back out racing on home soil and racing in front of my friends and family. It’s definitely a challenging course along the coast; it’s a bit undulating, it’s not overly technical but it comes down to the nitty gritty stuff.

“It was a bit challenging out there today with the weather. We had a lot of rain, which is nothing unusual for Tassie but it was good.”

You’re part of the short-list for the Rio team pursuit line-up. Are you calling yourself a time trial specialist when you go onto the road?

“Well, I don’t know. I probably wouldn’t say that. It’s a little bit different in the fact that, obviously, the distances we cover are a little different and we’re used to just riding along a flat track. But training for me, building up to the Mersey Valley Tour has been low intensity.

“I’ve been back in Adelaide for the last week and a half and that’s when we really started to pick it back up.

“So, to finish sixth in the time trial… I’m pretty happy with that. We’ve got a pretty good quality field here as well so I’m really happy with where I finished.”

The next few stages, are they particularly long? You know the terrain well. What’s the profile like?

“Yeah, I’ve ridden this course a few times and it’s very, very brutal. It’s one of the hardest NRS tours that we have on the women’s calendar. We’ve got Gunns Plain tomorrow which is a very steep climb of probably two to three kilometres. The race will probably be decided on that climb.

“The next stage, we have the Kimberley fire station hill which we repeat twice and we finish up the top of the Bridle Track with a hilltop finish.

“There’s a lot of different cards that we can play, especially with the High5 Dream Team, we have some really good climbers in our team. It’ll be really interesting and we hope, obviously, to win the Tour.”

As the local girl, are you the protected rider in the team?

“No, I wouldn’t really say that. I think, because this is obviously my first road race (of 2016) I’ll be helping the girls. I know the course well, when we’re going to turn and the places to attack and things like that, but I think mainly it’ll be… we’ve got some good hill climbers here so it’ll be mainly up to them.”

Who are you nominating? Kimberley [Wells, the winner of the Stan Siejka Classic in Launceston last December] is not in the line-up, is she?

“No, we have Lisen Hockings, our guest rider. And we also have Tessa Fabry and Lucy Kennedy. They’re all really good climbers.

“We finished really close today in the team time trial… we were fourth, fifth, sixth and eighth, so we’re all up there and I think that we definitely have some different cards to play tomorrow on the road.”

Oh, excuse me. It was a team time trial? I thought it was an individual time trial.

“Yeah, it was individual but we all finished like fourth, fifth, sixth and eighth – we were all really close to each other.”

“It was really close so if we had a team time trial today we would have gone really well.” 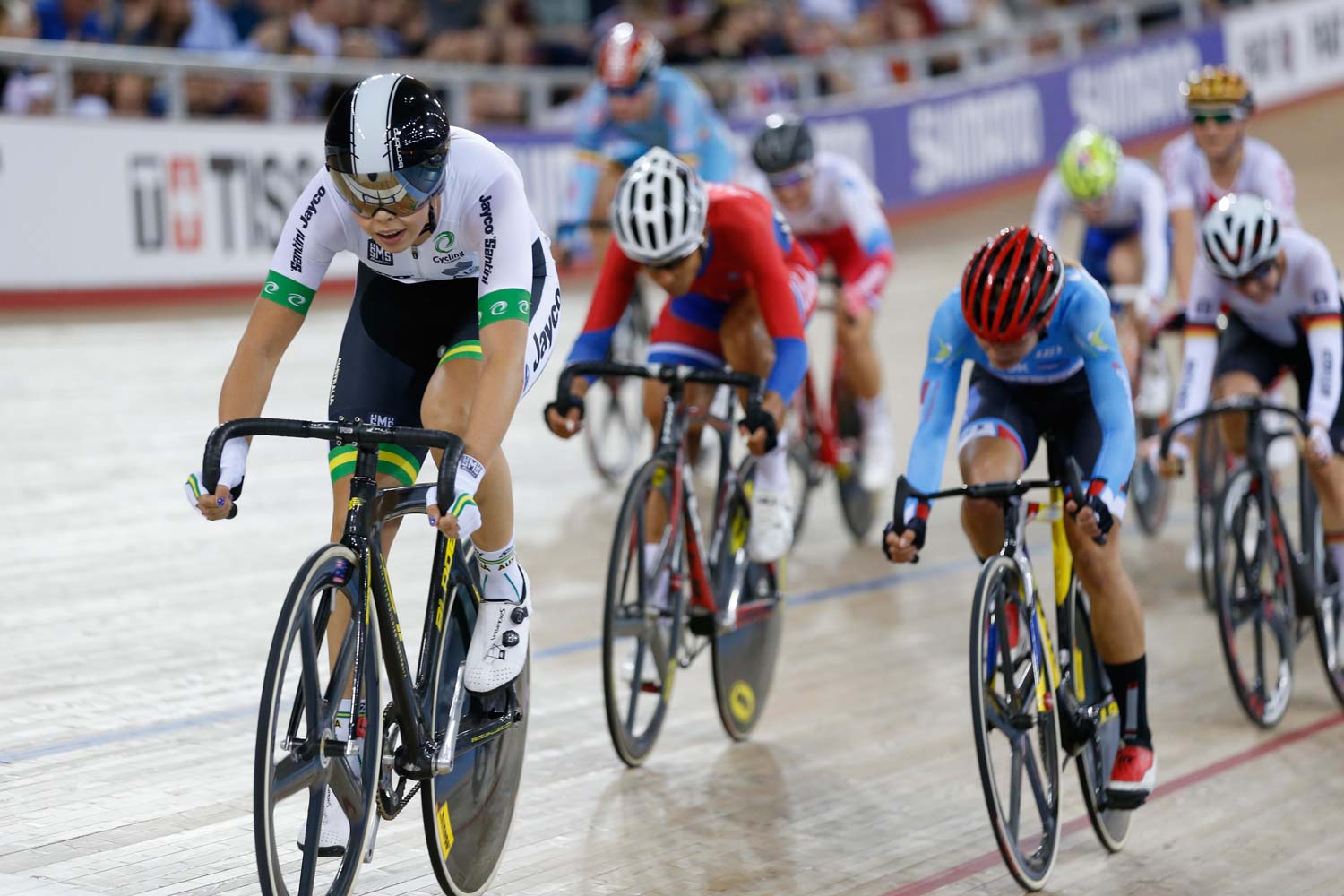 Georgia Baker, on her way to fourth in the points race at the 2016 world championships.
Photo: Yuzuru Sunada

You’ve got a give a round of applause to Bridie. She just keeps on keeping on, doesn’t she?

“Oh yeah. Definitely. Obviously she was the former hour record holder as well so… she’s just a really great time trial specialist and we could definitely see that today…

“She was [one of the first starters]. I was actually quite surprised by the order of [departure]. It obviously wasn’t on race ranking. I was second-last and Miranda Griffiths (in third place) was the last starter.”

We’ve got less than 100 days to go until Rio. Is this because it’s the Tassie component of the NRS that you sort of morph into a road rider for and then basically go back to a strict track program? How is it going to work for you?

“Yeah, it’ll be definitely what you just said. I came in to race with the High5 team and it’s my home tour so I always like to race at home, help out the other girls and hopefully there’s some opportunity that can arise on the road for me as well.

“But, pretty much, straight after this tour I’ll be heading back to focus on the track – also that’s what my build up has been for this race, concentrating on the track for just this year.”

You’ve had a really upsetting last year with the passing of your father and different things. How are you managing your emotions? Is it sort of good to have the distraction of the goal of Rio?

“I think so but it’s obviously the hardest thing I’ve ever been through so I think the distraction is good but it obviously doesn’t take away from the fact of what has happened.

“When I suffer and when I’m really hurting, I know that it’s nothing I haven’t been through before. I’ve been through a hell of a lot worse so I think having that gives me a lot of motivation and drive. I push myself a lot harder because I know that I can get through it.

“Also knowing my dad was my number-one fan so I know that he’d be so proud and I just hope… I know I’d be making him proud. That’s probably one of my key motivations to make the Rio team and just to be an overall successful, happy person.” 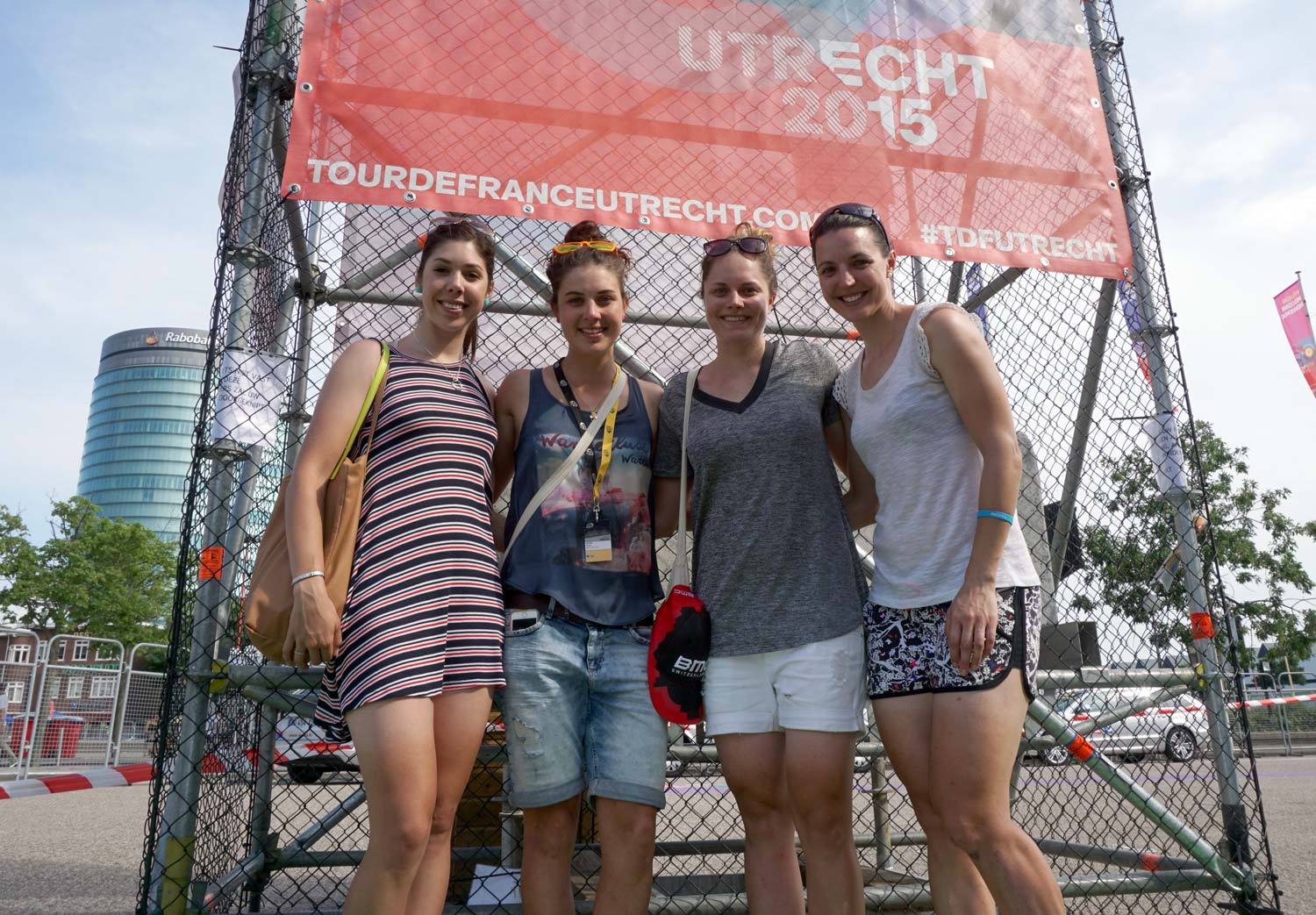 We’ve seen this week that there is a lot of interest in women’s track racing and women’s racing in general so it’s an exciting time coming up for you. I hope you make the cut for the final four for Rio and it’s a great shame that the points race isn’t there for someone of your calibre…

“Yeah, we don’t really have many rounds. It’s only going to be the team pursuit and omnium for the women.”

Do you think you’ll be lining up for the omnium? Are you on the shortlist for that one?

“No. That’ll be Nettie Edmondson, for sure.”

You know that one already.

“Yeah. Well, she’s a former world champion in it and it definitely will be Nettie if everything goes well with her which, fingers crossed, will.” 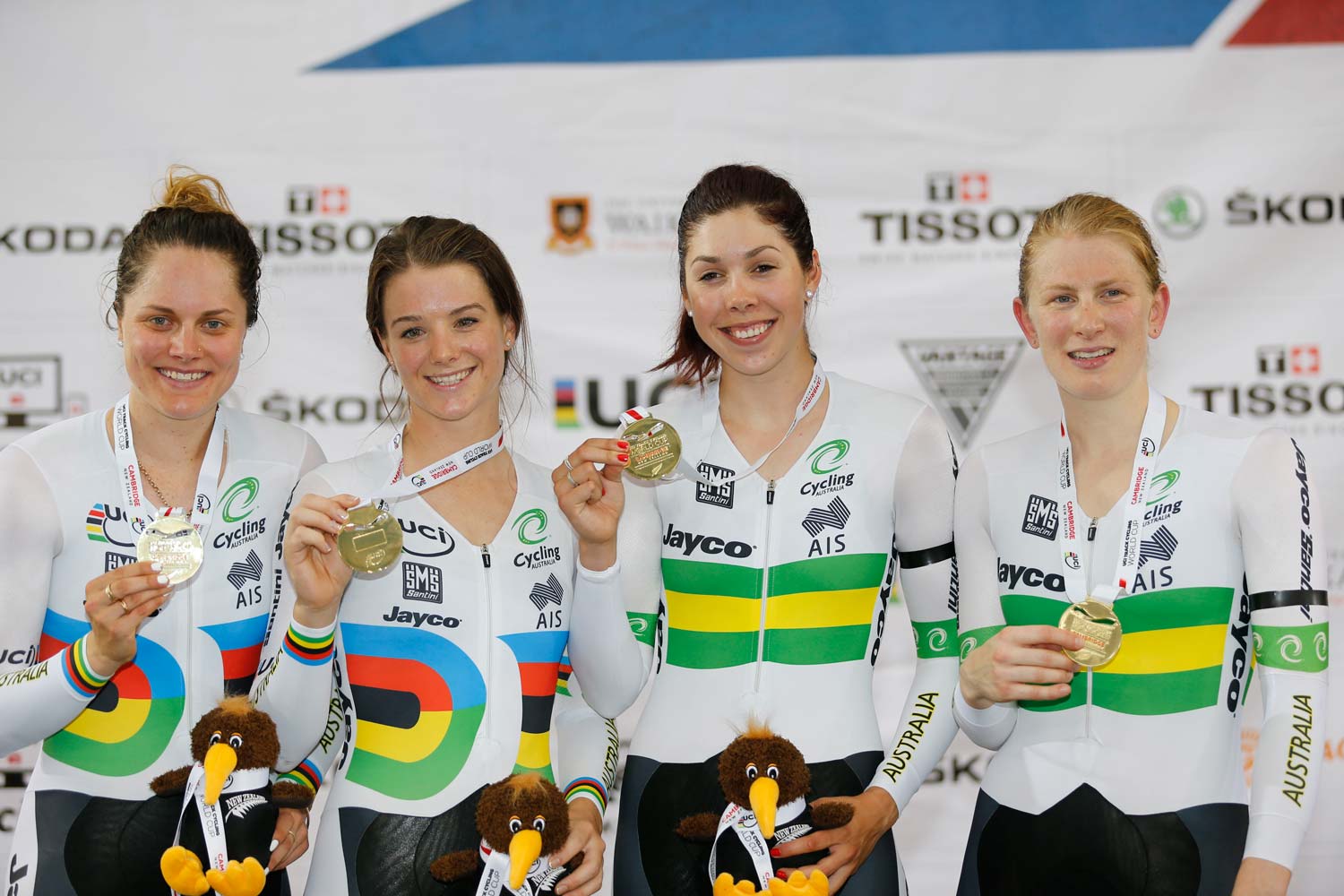