The story of the Tour Down Under is so often about the acquisition of time bonuses. Generally, in this scenario, it’s all about pure sprinters trying to steal a small advantage on their rivals in the hope of some time in the lead of GC. Today, at the top of Old Willunga Hill in stage five of the 16th Tour Down Under, it was a battle between climbers who were aware of the impact that the extras on offer at intermediate sprints and stage finishes would decide the title.

Simon Gerrans was the original GC leader in the 2014 edition, he lost his ochre jersey to Cadel Evans in stage three… but ‘Gerro’ is back in the lead after finishing third in stage five.

Richie Porte won stage five; Diego Ulissi, the winner of stage three, was second; Gerrans was third… and Evans, well his Twitter comments afterward explain his emotion: “Not an ideal result today. Beaten by a better team. Compliments to OGE.”

Here are a few quick interviews with some of the people involved in what has become a most intriguing race. 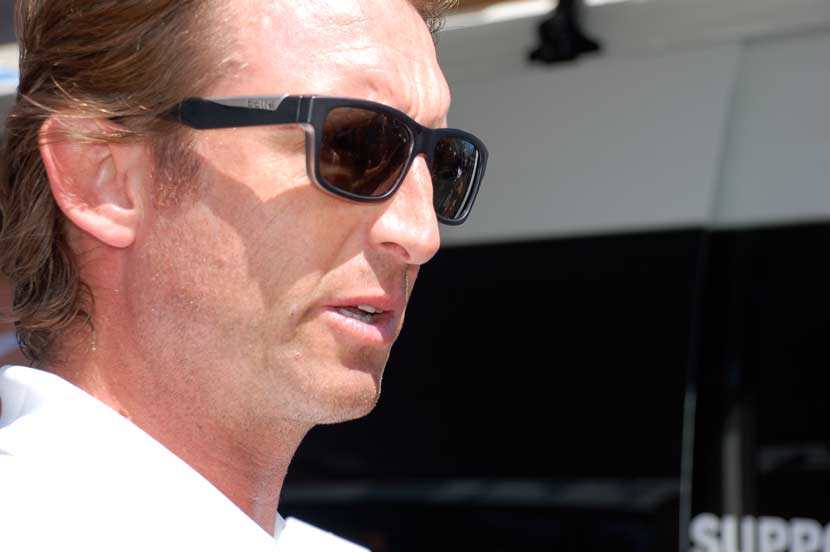 Matt White: “Yeah, seconds do matter. At the moment we’re leading by one second so the effort we put in yesterday to chase those intermediates [time bonuses] is going to win us the bike race.”

Yesterday you were telling the troops, ‘Okay, let’s pull back the break and we’ll chase a few seconds at the second intermediate sprint.’ And you got that reward with Simon finishing second in Yankallila…

“This is always a tour that comes down to the wire and this year is no different.

“Here we’ve seen a great showdown between three genuine stars of Australian cycling: Cadel Evans versus Simon Gerrans and Richie Porte – you couldn’t ask for a better script. And Diego Ulissi is one of the future stars of cycling.

“This has definitely been the hardest Tour Down Under terrain-wise, and for it to be decided by time bonuses just shows the quality of the field.”

You haven’t seen the footage yet because you were driving the car but you’d know that Cadel went hard at the bottom, put a big gap into Simon… but he remained calm and rode the perfect, patient race. It’s hard to do that.

“Yep, it’s difficult not to panic but Simon is cool as a cucumber and once you get to that last kilometre-and-a-half, if he’s on the wheel there… well, he’s not going to lose it.

“Even if Simon didn’t gain the four seconds on Cadel in the stage, and we just took the four seconds of bonuses that Simon got for third place, I’m pretty confident we could have got the other three seconds tomorrow if we needed to. But now we don’t have to; we can just play it defensively [in the final stage]; I really doubt Ulissi or Cadel will try for time bonuses tomorrow because, at the end of the day, they know they can’t beat Simon in a sprint so we’ve got it covered.”

The team had him beaten mentally as Evans knows that he can’t sprint and Simon knows he can.

“That’s the beauty of having someone like Simon in a tour like this: he’s such a quick customer and the race really does suit his characteristics.” 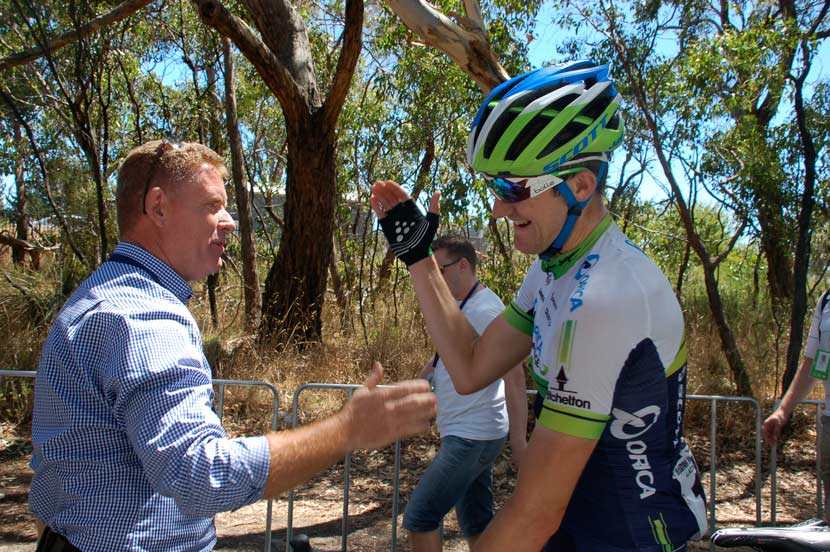 RIDE spoke to Shayne Bannan, the general manager of the Orica-GreenEdge team, moments after it was confirmed that Simon Gerrans had regained the race lead by just one second from Cadel Evans.

Gerrans began the fifth stage seven seconds behind Evans; four seconds separated the pair at the top of Old Willunga Hill… and the four second bonus Simon earned for his third place meant he leapfrogged Cadel in the overall rankings.

“How important now are those time bonuses that Gerro won on the first stage – that one second [at an intermediate sprint, plus 10 seconds for his victory in Angaston], and again yesterday…” Bannan said after hugging the team’s benefactor Gerry Ryan. Although filled with emotion, the manager remained calm in his commentary.

“What a stage for Australian cycling,” he continued. “Richie Porte – what a great victory. Cadel, well he just showed his class. And Gerro showed his sprint.”

It was tactical nous and patience that prevailed. Had Evans not ridden so hard at the base of the final climb, when he put distance into Gerrans, he might have had some energy to respond to the late surge by the Australian champion.

But Evans knows about the speed of Gerrans. He had to try to take an advantage well before the finish. And it almost paid off.

“Gerro had to play the patient game,” said Bannan. “He couldn’t afford to react straight away so he was patient and he executed perfectly at the end.”

When Simon says he is going to win something, he often does. It’s happened in the nationals (twice), Milan-San Remo, and stages of the Tour de France, Giro d’Italia and Vuelta a España. He has also done so repeatedly at the Tour Down Under. And Bannan appreciates this ability.

“There aren’t many bike riders in the world like him. He’s certainly very good at selecting races and targeting them. He is the ultimate professional and we’ve seen him time and time again pin-point targets during the year and achieve them.

“We’ve still got to get through tomorrow,” warned Bannan. “It’s not won yet.”

There is still the final stage but that won’t mark the end of Gerrans’ Australian campaign for the early season. “After the Tour Down Under, he’ll ride the Sun Tour then he’ll have a break and prepare himself for the Classics and Milan-San Remo in particular.”