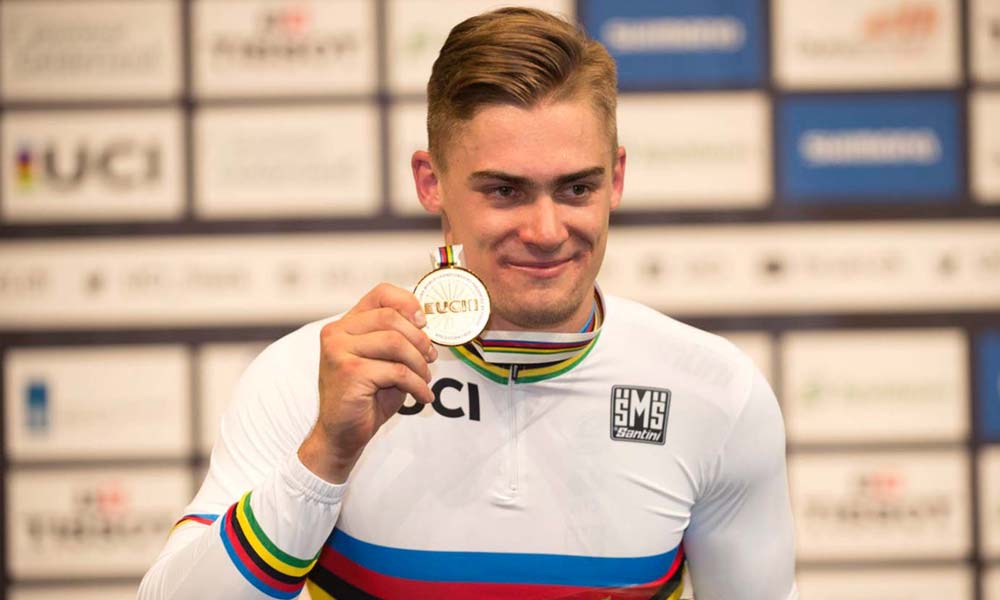 Of the four Australians who contested the track cycling world championships last week, two won gold medals and each of the quartet enjoyed some podium time. RIDE spoke with the new sprint world champion, Matthew Glaetzer a week after his victory in Holland.

He raced the keirin, ‘kilo’ and sprint on the velodrome in Apeldoorn last week. Got on a plane on Tuesday and flew home to Adelaide. And then it was immediately back to the track for more training. Matthew Glaetzer has a rainbow jersey as world champion of the sprint but there’s still work to do.

In April, he’ll race again and probably get a little bit more TV airtime when he and a much larger Australian cycling team contests the Commonwealth Games in Queensland.

We have come to know Glaetzer well over recent months; he is an approachable rider who provides a good verbatim overview of how he sees his racing.

You can find other interviews with him on the RIDE site where he talks about going under the minute barrier for the kilo in Manchester, and again at the nationals… but this time we talk about his emphatic triumph in the sprint.

When we spoke, he was between sessions at the velodrome. Although a little out of breath as he prepared for some gym work, he provides some great answers that explain how he got through the sprint world championships undeafeated.

Click the link above to listen to RIDE’s interview with Matthew Glaetzer.

RIDE: Matthew Glaetzer is back in Australia after an amazing couple of days in Apeldoorn, the Netherlands last week at the track world cycling championships. You won the sprint. Congratulations.

Matthew Glaetzer: “Yeah, thank you so much. It’s been a big goal of mine for many years now and to finally crack it was unbelievable on the night. I was like, ‘Wow! I’ve actually done it.’

“A lot of hard work. All the team behind me has put in so much work as well, so it’s a massive achievement and it’s The Big One – it’s the sprint, you can’t get much better than that.”

You join a long list of Aussies who have won that title before… Who was your sprint idol when you started in cycling?

“To be honest, I didn’t have a sprint idol when I started.

“I grew up not really knowing about cycling. I was into athletics – pole vault and what not – and I only got into this sport through injury.

“I was just being me. I mean, I didn’t know any history. I often got paid out because I knew nothing about past performances or who was good in the sport 10 years ago.

“I didn’t really have an idol, as such – and still don’t, but the closest I would get is me really looking up to and respecting Chris Hoy. He’s a class act, [who has] achieved so much and he’s so down to earth and humble. He’s one that I really look up to.” 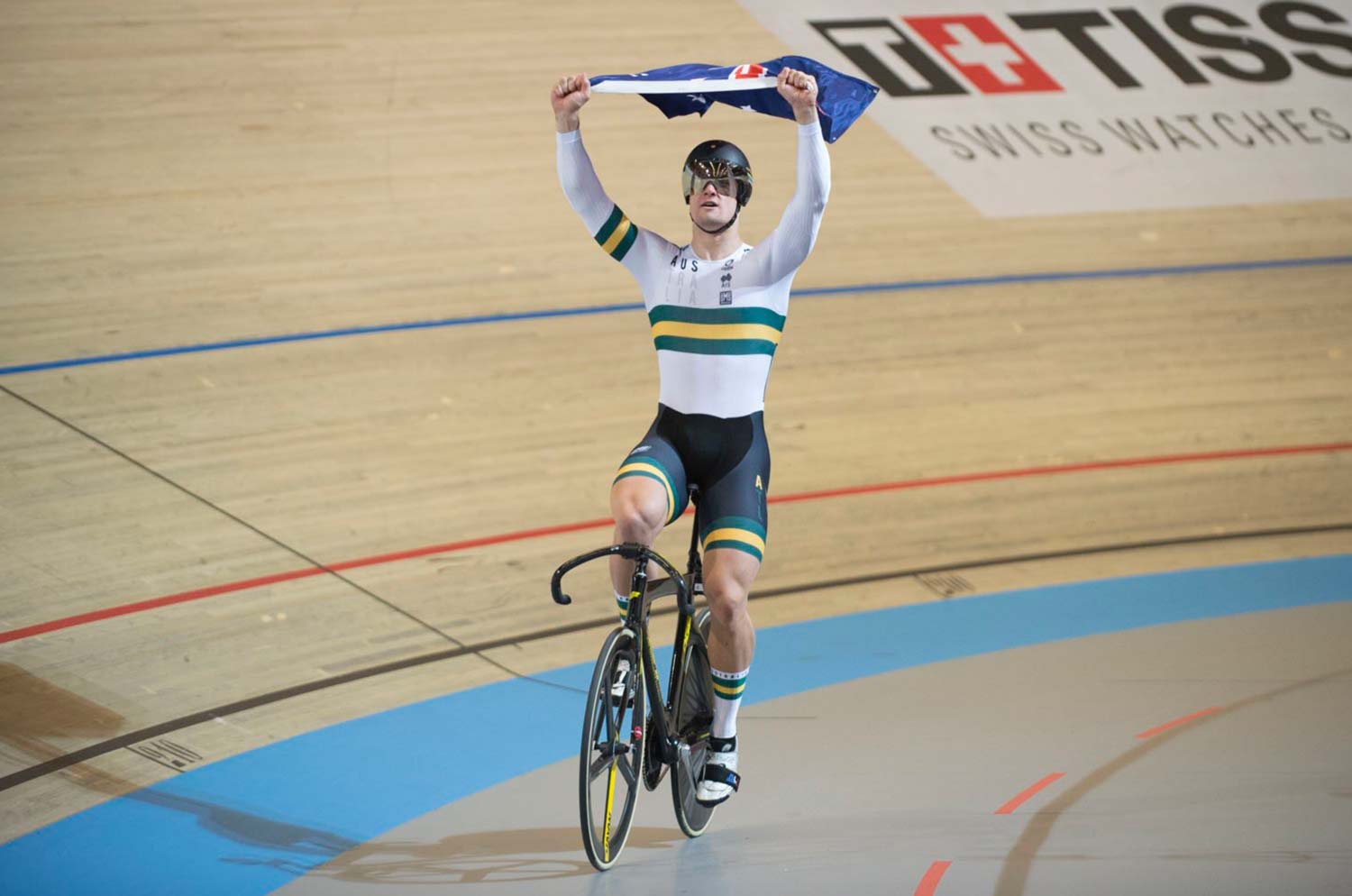 Just talk us through the sprint competition. We also should note that you got a silver medal in the ‘kilo’, in another sub-minute time trial – so that’s amazing. Congratulations on that effort too. But you were undefeated in the sprints, weren’t you?

“Yes, I didn’t lose a round in that competition.”

And so how many rides in total? Can you talk us through it?

“I had the qualifying to start with – so that’s one. I qualified second [behind kilo world champion Jeffrey Hoogland] by a couple of thousandths of a second [0.003].

“The second round, the one-eighth final… I can’t actually remember who I was up against: maybe a French guy (actually: Reyan Helal from France) and I only had two-10ths of a second advantage on him though so I knew it was really serious. I couldn’t be complacent at all and I executed that race well. Got that win and then I was through to the quarter-finals against Denis Dmitriev, reigning sprint world champion – a guy I’ve never beaten before in the sprint… and it was last year that I got relegated, controversially, and that prevented me from riding against him in the sprint competition semi-finals.

“So, it was a nice opportunity, from what happened last year, to really try and beat him because if you want to be the best, you’ve got to beat the best. And he is so hard to beat in racing. He didn’t quite have the legs that he did have last year but we executed our race plan really well and managed to beat him in two rides straight. That was huge!

“I never celebrate after winning races until it’s the final but that one, I thumped my chest and I was like, ‘Come on! That’s massive!’

“I treated that quarter final as the final. It was that serious and that difficult for me.

“I then moved on to the semi-finals from there against Sebastien Vigier from France and, again, there was nothing in the qualifying so it was just about keeping that focus that I had all day.

“I was in the gold final against [Jason] Kenny in 2016 and this time I was up against Jack Carlin of Great Britain.

“Again, I was in such a good mindset, so focussed… thoughts of winning it started coming in but I just finished it straight away and just stayed focus, stayed in the moment, which was the key for me to have success.

“I just executed my first ride pretty well. I was feeling good all day and just had to ride two more good races.

“We had a good battle in the final, especially that second race – it was nice and close. It wasn’t exactly what I’d planned but I was up for the fight so I was like, ‘Bring it on. Let’s go for it.’ It was a good way to finish and a nice bit of a drag race with the sprint final decider.

“It was great fun and just huge elation when I crossed the finish line.

“I was so pumped and it took me a lap to really just release all of that supressed emotion that I’d been doing throughout the previous two days of the sprint competition. And I just let out a massive ‘Come on!’ coming down the back straight.

“It was huge emotion. A bit of relief and a bit of emotion at the same time. I was super pumped. I mean, I’d just won the biggest event short of an Olympic gold medal so… yeah, it was incredible.”

Good stuff. Congratulations… this is something you dream of for a while and when it happens does it live up to expectation?

“Yeah, I mean you struggle to believe it in the moment. I mean, you’ve won a sprint race but to call yourself ‘world champion’ is a bit weird because I don’t view myself as anything different to most other people that are in the competition. It’s huge and to share it with the small team that [Australia] sent there was awesome.

“Ross Edgar has been a massive help for me and so to have him there smiling and jumping around and just super-elated, it adds to the whole experience.

“The crowd gave me a standing ovation which was very special, so I’ll never forget that. The Dutch crowd are the best crowd to race in front of as an international because they are so respectful and appreciate really good cycling achievements.

“It was seriously a dream come true and after a lot of disappointment in the sprint competition over the years, to finally crack it and to win it, was absolutely huge.”

People listening to this interview will notice that you’re a little bit out of breath. You’re in between sessions at the track. I know you’re about to go in and do a weight session so we just wanted to have a quick chat on the week that you [became] world champion – and we’ve done that so thanks very much for taking the time. And we’ll follow your progress all the way through to the Anna Meares Velodrome in Queensland at the Commonwealth Games later this year.

“No worries. Thanks Rob.”