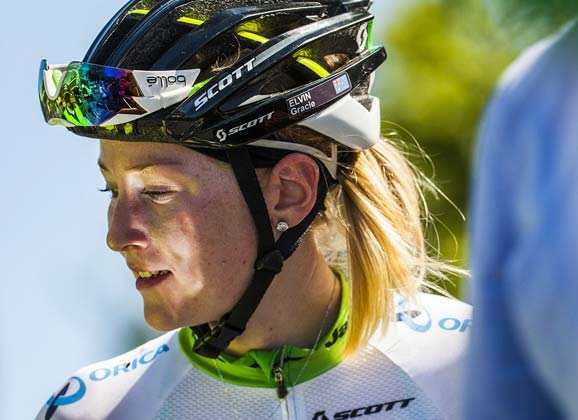 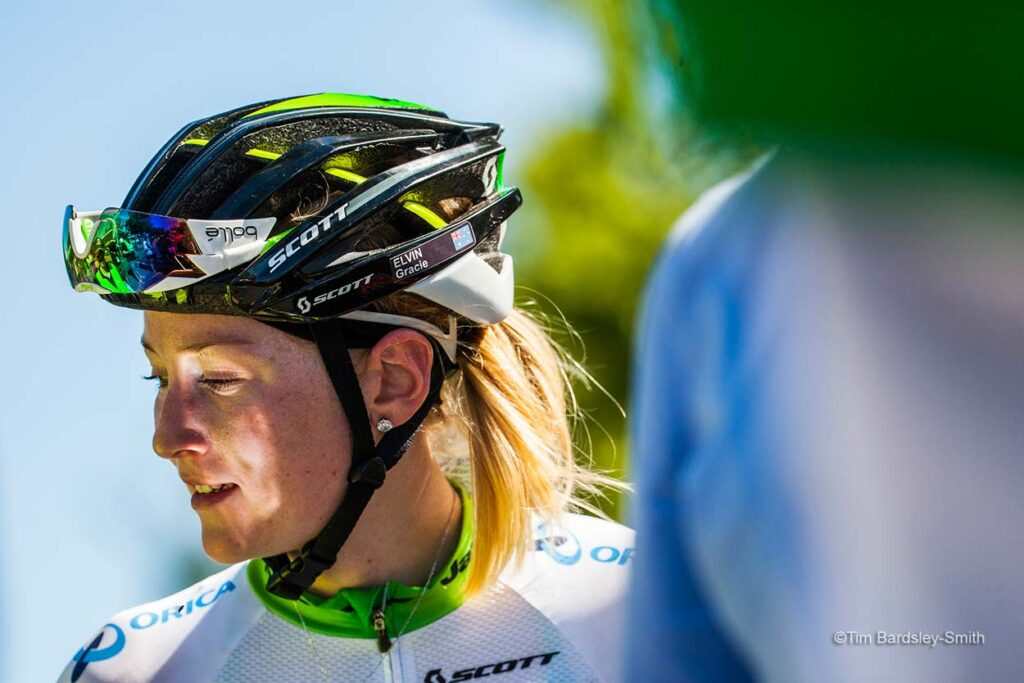 Gracie Elvin: winner of the Australian road race championship in 2013… and again in 2014.
Photo: Tim Bardsley-Smith

Four days before lining up to defend her title in the Australian championships, Gracie Elvin told RIDE: “It’s going to be a hard day either way but that’s why we race and I think we’re all ready for it.” The 25-year-old was dropped from an elite group on the final climb of the road race along with Lauren Kitchen. Two Orica-AIS riders made the front selection and thus Elvin was afforded the luxury of being able to ride on the wheel of her rival who chased hard to rejoin the leaders on the descent leading to the finish in Buninyong.

At the finish, Elvin launched her sprint with “around 150 metres to go” and held off Kitchen by about half a bike length. The title, as they say, was successfully defended.

We revisit the road race from the 2014 nationals by speaking with the winner and getting her perspective on a great contest, and present a gallery of a fine day of racing by Tim Bardsley-Smith.
Click the image of Gracie Elvin below to load the gallery…

Elvin Q&A: “I just had to be smart about it”

RIDE: Gracie Elvin, two-time national champion. We spoke on the Wednesday before the race and you were confident that the team would go well but I didn’t get the vibe that you thought you might win again…

Gracie Elvin: “Yeah, it’s hard backing up a championship win. I hadn’t experienced that before so I was very nervous even if it didn’t seem like it. I was having a little bit of an internal struggle in the lead-up week even though it was only pressure from myself and nobody else.

“But I knew that my form was good. Like I said in the previous interview, I knew that my team-mates were all fit and strong and that we were one of the smartest outfits there. So, yeah, I was confident in the team but I wasn’t so sure about myself – I didn’t want to set myself up for disappointment.”

Judging by the names that were behind you in the results, it was a formidable line-up for the sprint. For people who, alas, could only follow the race from afar using social media and online coverage are you able to offer a summary of the sprint itself. It was another fast finish from you and you came up… what, a length in front at the finish?

“It was pretty close, maybe half a bike length to Lauren Kitchen. She was coming at me fast at the end.

“Last year I opened up my sprint way too early and Jo [Hogan] nearly got me on the line. I was a lot less experienced a year ago and this time around I knew I couldn’t make the same mistake with such a strong field of girls. I was really patient in the sprint.

“I marked Katrin Garfoot; I thought she’d be the strongest sprinter out of the group and so I made sure I got the jump on her before she knew it. I went as hard as possible. I gave the most in that sprint than I’ve ever given in a sprint before. I really wanted it and I think I was actually shouting as I sprinted across the line.”

“I think it was a yell and then it turned into a ‘Yeah!’”

“Yeah, it was definitely a bit of kung-fu or a tennis thing that they do. It actually helped me out: I’ve never done that before but I was putting everything into it and a bit of sound came out too.”

I don’t think anyone would have heard it because the cheering would have been loud. From all accounts it was a good crowd. Is that right?

“It was actually the best crowd I’ve ever seen for a nationals girls’ race. It was an awesome atmosphere. Even up on the hill, there were heaps of people and lots of cowbells and cheering and someone was running alongside in a Teletubbies outfit… I loved it.” 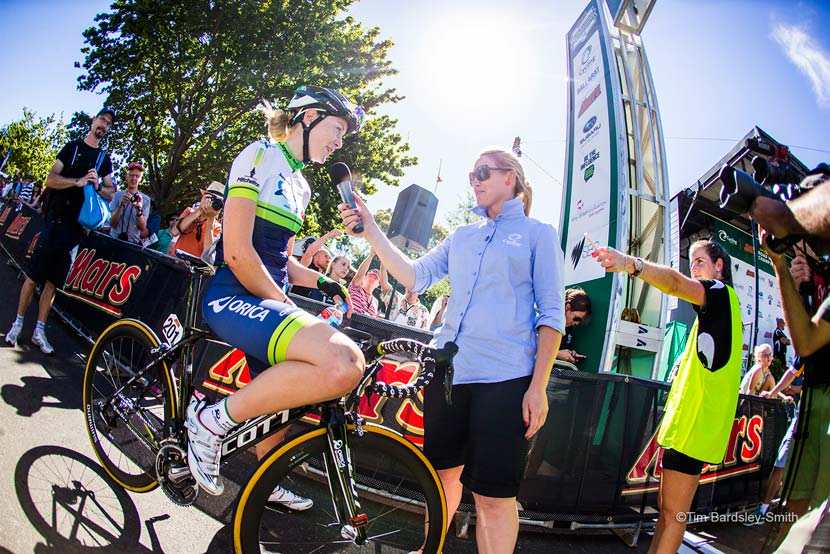 It’s wonderful that the championship has become what it is: a full atmosphere…

“Yeah, it’s awesome. I think it’s cool that we’re on the same day as the under-23 men as that’s always such a great race and to see the up-and-coming stars of the future is great. They always make it a pretty good show so I think a lot of people come to watch that and then they want to see the girls and see how we compare.

“I think it’s growing and it’s such a good weekend for everyone to come and watch all three races on the same course.”

You said before the race that 10 laps up and down that hill can be taxing yet it still came to the finish with a group of nine or 10.

“I think there were nine of us by the finish but it was a bit broken up by the end. Seven riders got over the last climb in the lead group and I wasn’t one of them. I got dropped with Lauren Kitchen just near the top. I just couldn’t make it but we dragged ourselves back to the group before the descent and we became a group of nine.

“It was not going to be an easy sprint for me. I just had to be smart about it and be patient until the last second.”

From about where did you make your jump from behind Katrin?

And she ends up third. Hers is a most interesting story really: [Katrin] didn’t really care about cycling when she lived in Germany and she comes to Australia and she finds the sport largely by accident… and she’s an absolute talent, isn’t she?

“Oh yeah. She was the person I was most worried about in all aspects of the race. It’s great to see her doing so well in Australian cycling and for the AIS to pick her up now she’s an Australian citizen. She’s definitely mature mentally and I think she’ll really help the other girls who she’ll be riding with. It’ll be interesting to see how she goes but I wish her all the best.”

Let’s also pay tribute to the effort of Lauren Kitchen. Were you swapping off with her after being dropped on the climb – was there good cooperation? How did that work?

“Ah, to be honest: I sat on her and she had to drag me back to the [lead] group because I still had two team-mates up there in the front group.

“It was a bit of an awkward situation where I knew I would be the best sprinter but I wasn’t going to be in the chase to bring my team-mates back and let someone else win the sprint.

“It’s just one of those things in a race – there are so many unwritten rules and things that go on. She knew it, and she took that gamble and rode at the front and rode me back to that group in the hope that she could win the sprint herself. I thank her for that but it’s definitely a tough way to race.”

On the podium was she cursing you or was she aware that it’s just tactics? What you’ve explained is no rocket science, but how is the vibe when something like that takes place?

“We’re quite good friends anyway. She knew what the deal was so I think she was only disappointed in herself for not timing the sprint well enough. She was so close to me at the end…

“She was really lovely to me after the race and was happy that I won as well. It’s nice that women’s cycling in Australia has a good vibe and that everything gets left out on the road and we can all be friends afterwards.”

Was there anything from the day beyond the final 150 metres when you surge into the lead that people should know about? Was there some stand-out incident? It is a long day in the saddle…

“Well, Lisa Jacob’s certainly had one of the rides of the day. She broke away on the climb in lap two and stayed away until I caught her on the climb of lap eight. She had a long day out on her own and I think she got a lot of good cheering from the side of the road, and she managed to get the KOM – or, I should say, the QOM. She was great and, by the time I caught her, she was still willing to work to stay away with me even though she was pretty tired by then.

“She’s a pretty cool chick and she’s about to go over to the cyclocross worlds so I think it was a good training session for her.”

She’s amazing: a lawyer who is on the board with Cycling Australia, she races her heart out in all sorts of disciplines… and she’s writes great columns for our magazine.

“Yeah, that’s right. She’s really easy-going and a very friendly person as well. I’m a big fan of hers. She’s got a good sense of humour too.”

Hopefully the interest that was generated on social media on Saturday will transfer into the mainstream media and next year we get to see your race live on television.

“Yeah, I hope so. There was certainly a lot of girls there animating the race and not just from my team. I was beyond happy with how we rode as a group; tactically we did a lot of things right and that made it an exciting race in the second half, but a lot of other girls put their best foot forward as well and I think it’s great to see everyone racing so well and proving the point that it is TV worthy.” 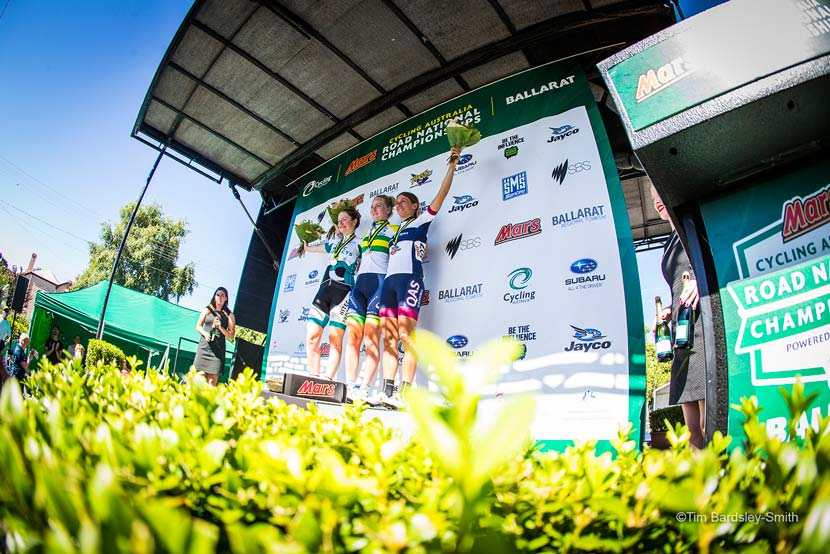