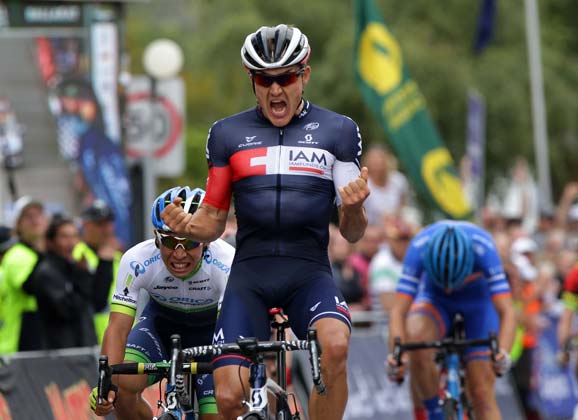 Heinrich Haussler was part of The Early Break at the 2015 national championships but when that was caught by 100 men, he considered riding for his IAM Cycling team-mate David Tanner. Eventually the 30-year-old found his mojo again and onward he raced… to a fine victory ahead of Caleb Ewan. 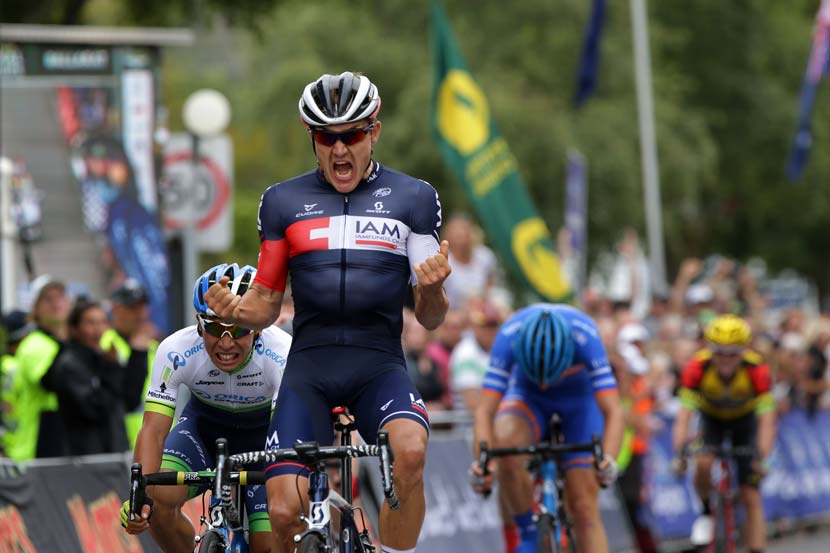 Classic start to a Classics campaign

He’s no stranger to cycling fans. For 10 years, Heinrich Haussler has been a professional and most of us know the basics of his story: raised in Inverell, he set off for his father’s motherland, Germany, as a teenager and went about setting up a cycling career. He’s competed as a German and an Aussie. And now he’s the Australian champion.

The 2015 season started like ‘Heino’ had hoped it would. He will swap the blue, red and white jersey of his IAM colours for green and gold for the next 12 months. His team’s clothing supplier, Cuore, had a full green and gold set made for him before he left Europe for “an early return” to Australia.

Haussler’s special jersey collection will see the heat of battle. He will make his debut in the Australian champion’s colours at the Tour Down Under, followed by the Cadel Evans Great Ocean Road Race and that’s it for competing at ‘home’ for another 11 months.

December was training. January is racing. In February he’ll take the green and gold to the desert of Qatar. And then it’s time for rest, recuperation, and preparation for The Next Phase of the season. The Classics. That’s the main goal.

Aim high. Why not?

In 2009, he was beaten by a phenomenon in one of the most thrilling editions of Milan-San Remo in many years. Runner-up to that sprinting freak, Cavendish.

He’s won stages at the Vuelta a España and Tour de France but those were years ago. Since then, second place has been a recurring theme. 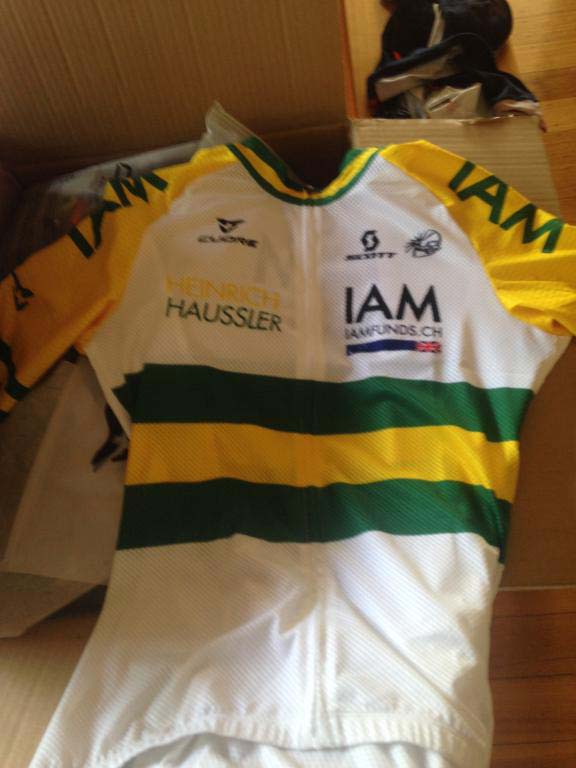 Be prepared… the IAM Cycling Team had a set of national champion’s clothing made for Heinrich Haussler… just in case.

RIDE spoke to the new national champion the morning afterwards and started the conversation asking about the pre-prepared national champion’s jersey. He must have been confident… but, it’s worth noting, Tanner also had a green and gold set of clothing made up.

“We came out to Australia with Roger Kluge and Dave Tanner a little bit earlier than usual – already in the middle of December – to do some hard training just to get used to the weather and get over the jetlag,” said Heino over the phone. “You can’t just come over a few days before a race and be ready for it if you want to be serious about it.

“With Simon [Gerrans] not being there with his broken collarbone, we just thought this race is going to be wide open so we had a chance-and-a-bit this year.”

The odds steadily increased but victory wasn’t certain until the final 20 metres of the 183km race. Even then, it seems his final pedal stroke of the race – or the scream of elation as he crossed the line – sent his chain flying.

“No chain.” It’s a favourite saying for Haussler. ‘No resistance’ is the sentiment. Pedalling air. Pushing a gear with ease. Happiness instead of hurt.

“That’s the funny thing,” he said, “so many people have sent me pictures and underneath they said, ‘Oh, you really had no chain today.’

“I really have absolutely no idea what happened. It’s just lucky it didn’t happen 50 metres before.”

A dropped chain could have spoiled what was otherwise a perfectly executed plan. But on this day, second place – the runner-up – would be Caleb Ewan. And the first-year pro was clearly a rider many believed would be the winner, including the eventual champion.

“With two laps to go I already got dropped on the climb,” Haussler explained.

“If I had tried to go with them, I would have stayed with them maybe for another 50 metres and then I just would have exploded completely. And then I would have been full of lactic acid and I wouldn’t have been able to ride to try and get back to them.

“I knew if I just paced myself and if I was not too far back over the top, I was hoping that they’d regather – because there were six guys from six different teams and I knew they weren’t going to work with each other. It was going to be cat-and-mouse. They were going to start attacking, not riding properly, and I knew I had a chance to get back.

“I played that card and it worked out perfectly.”

The ideal scenario turned in favour of Haussler. He got Ewan’s wheel on the approach to the finish line.

If he was riding based on numbers, what was he looking at going up the Mount Buninyong climb? How big was the wattage? “When they were attacking,” he said, “it was 700 or 800. It was unbelievable.

“That last attack that Caleb did was very, very, very impressive! For his age, a first-year pro doing 180km race like that and attacking like that on the last lap on the climb… he’s got a big future. He’s unbelievable.”

The runner-up was in everything. Unlike the winner, Ewan was omnipresent throughout. Never dropped and always in command, we saw him act on a whim over the hill in the closing lap. The little sprinter attacked on the climb. It was a logical move: had he not upped the pace the chase group may have caught up; that included pre-race favourites like Cadel Evans, Richie Porte and Simon Clarke. But the neo-pro, the 2014 under-23 national champion, had hoped to begin his career with a win.

He almost got it too.

So, did the climbing effort cost him the sprint? “I don’t know,” replied Haussler, “but you’ve got to take your hat off to him.

“If I was his age, I wouldn’t have done anything different.

Haussler didn’t have the legs to climb, but he had the speed at the end. He had a chain. He had the power – “a bit over 1,300 watts” – and he had a little bit of luck on his side this time. 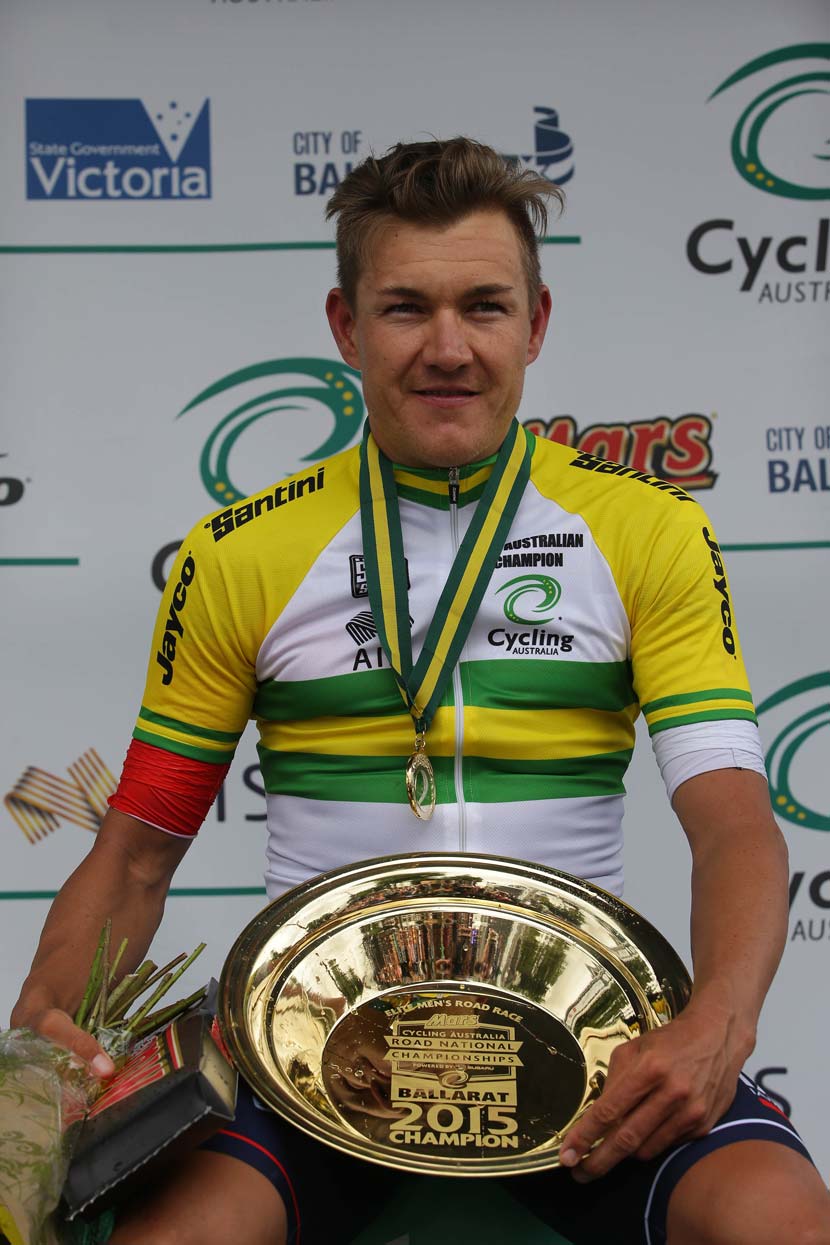 The presentation jersey for the gold medal winner: Haussler on the podium in Buninyong.
Photo: Cycling Australia

The win would eventually come to Heinrich Haussler, but there was a moment when he was willing to concede. The strength and depth of the peloton almost became too much for him to bear.

“I was in that first group there,” Haussler told RIDE. He was one of the 15 guys who went up the road at the beginning of the race. “We were out there for six or seven laps and then we got caught and I was like, ‘There are still 100 riders here!’ That gave me a big mental setback. I was pushing myself the whole day and then we get back to the bunch and there are still over 100 guys there.

“That was a bit of a turning point. I was almost ready to suck it in and just say, ‘Nah, stuff this – I’ll just work for Tanner.’

“But then [another] group went and I went with them again and all of a sudden I was back. I took some gels, had a good sensation on the climb – I was spinning – and I felt good again.” No chain…

Seven riders would finish ahead of the Favourites Bunch. Seven teams were represented. Seven men with seven good back-stories. Seven scenarios were all being dreamed up simultaneously. What was the winner thinking at that time, in the final three kilometres when they were over a minute ahead of the rest of the peloton?

“It was all a bit of cat-and-mouse,” concludes Haussler. “Everyone was looking at each other. They’d stall and a guy would come from behind and one would instantly follow… and I was just glad.

“I didn’t want Caleb on my wheel.

“I knew it was a headwind sprint – a really strong headwind – and I think if he’d have been on my wheel, nah… he would have just gone around me easily.

“I think Bobbo attacked with 600-700 metres to go and he just went full. I think Caleb then went straight on his wheel and used [Bobridge] pretty much like a lead-out. Then Caleb [started his sprint] and I was on his wheel and I was just thinking, ‘Yep, this is perfect! The perfect situation…’

“All those sprints, they happen fast but in the back of your mind, it’s like slow-motion. It’s kind of weird.”

Fast becomes slow. A winner finishes second. And a regular runner-up steps up to the top spot of the podium. Not a bad championship. Not bad at all…