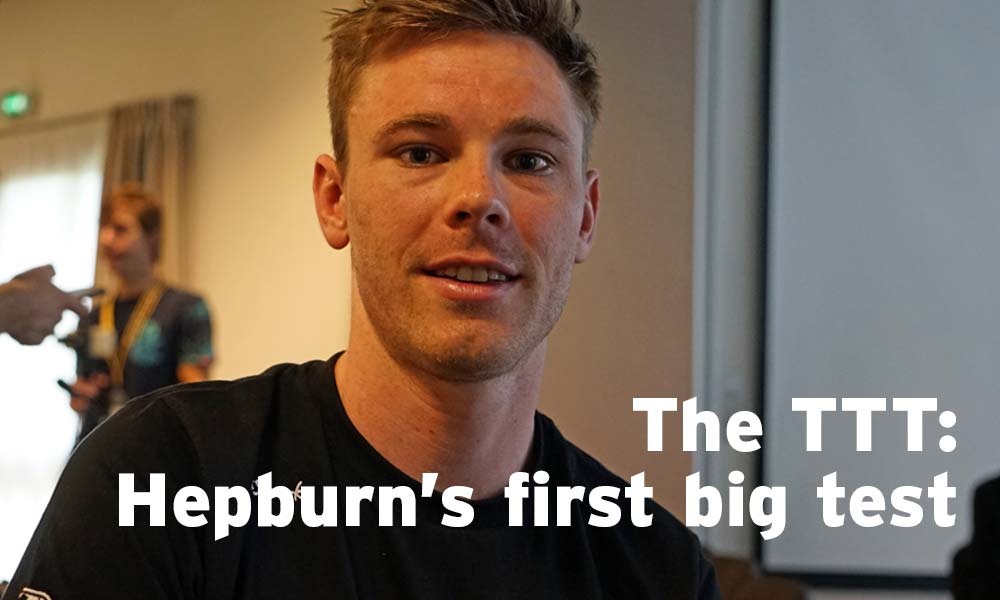 Michael Hepburn knows a thing or two about going fast on a time trial bike. He makes his Tour debut this year and the TTT of stage three is his first big opportunity to have an impact.

Michael Hepburn is no stranger to big competitions. He’s a two-time Olympic silver medallist from the team pursuits of 2012 and 2016 and a multiple world champion in track events. He’s 26 now but it seems like he’s been around for a lot longer than his age suggests. The Mitchelton-Scott rider wanted to get his track obligations out of the way before putting all his energy into his road cycling career.

With Rio now long behind him, Hepburn is doing what it takes to drop a little weight while maintaining the kind of power that he’s renown for. He is part of the engine room for the TTT in Cholet today and he knows that it’s his first big chance to make an impression on his first Tour de France.

“For me, it was always going to be about supporting a GC rider, especially over the first nine days with the team time trial, with the wind, with the cobbles. You probably can’t win the race in the first half but you certainly can lose it.”

The third stage is where Hepburn is really expected to shine. His history in the team pursuit means he knows all about precision on the bike and about how to extract the most out of the significant power he has.

“We’ve ridden a lot together: at world championships, in other Grand Tours, in other races,” said Hepburn a day before starting the Tour for the first time. “We know each other really well and some of us have even raced together on the track, like Durbo and myself years ago.” 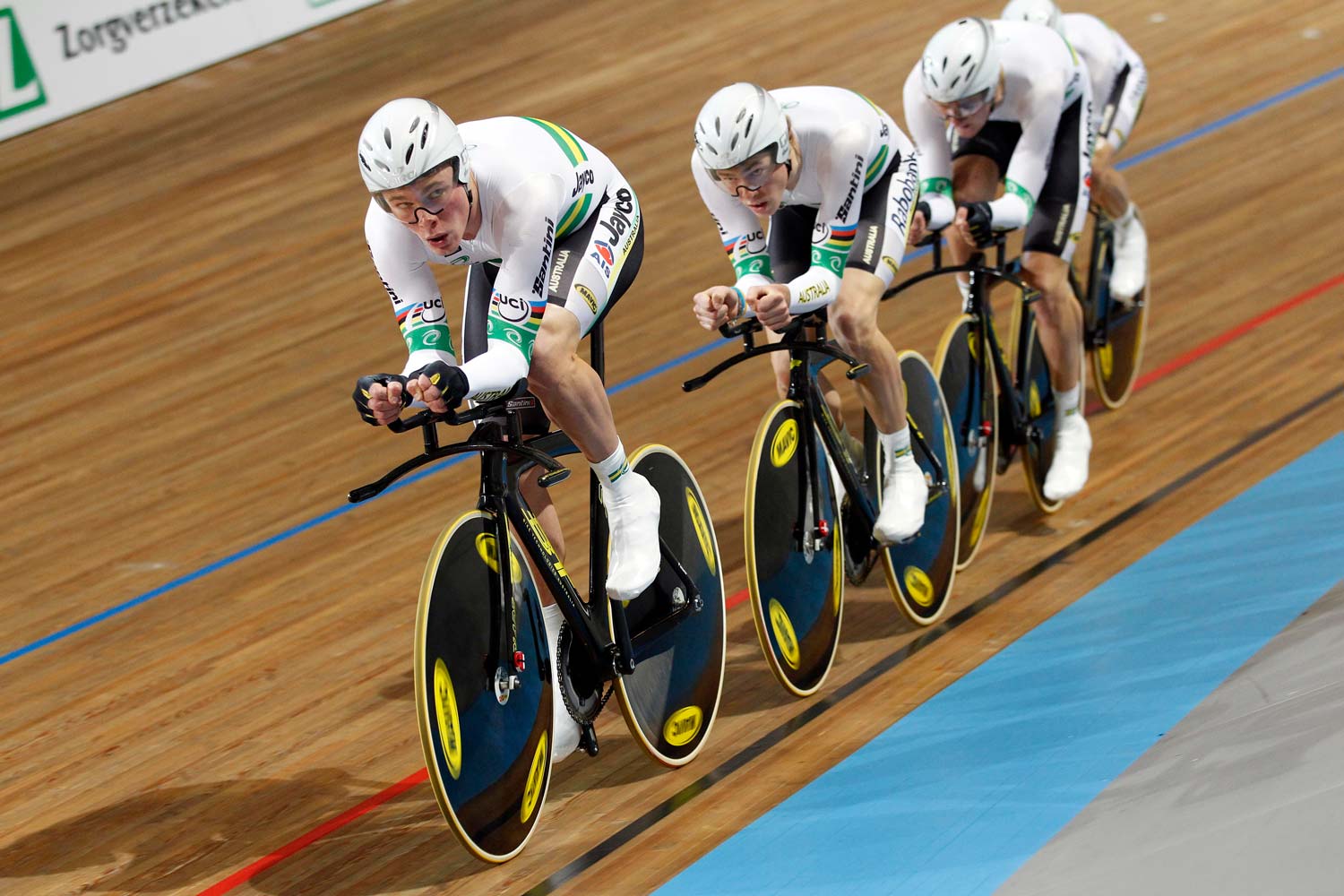 Hepburn leads the Australian pursuit team at the worlds in 2011 (above).

When he made his Grand Tour debut in 2014, it was a winning start: victory in the TTT in the Giro d’Italia in Belfast (yep, Belfast… Ireland, not Italia – you know the story) and the team enjoyed a few days with the maglia rosa.

It wasn’t their first team time trial win and it probably won’t be the last. There is history with this discipline and Hepburn, although young, will bring a good dose of TTT experience with him to Cholet.

“A lot of guys come from a team pursuit background and have a good understanding of how it works: smoothness, technique, gears… all this sort of stuff.

“We have an order that we’ll run with,” he said of the sequence of who follows who but, he adds: “We’ll make slight changes all the time but we have a rough idea of what we’re going.

“Some teams will have eight guys all swapping off and some teams will have the climbers sitting on. We’re not exactly sure what we’ll do yet but we’ve had a look at the course in the lead-up to the Tour and we’ve got an order we think is quite good.”

Some of the original plans may have changed; Adam Yates, Daryl Impey and Luke Durbridge have all hit the ground at some point over the weekend and the team waits to see how they bounce back with their injuries. 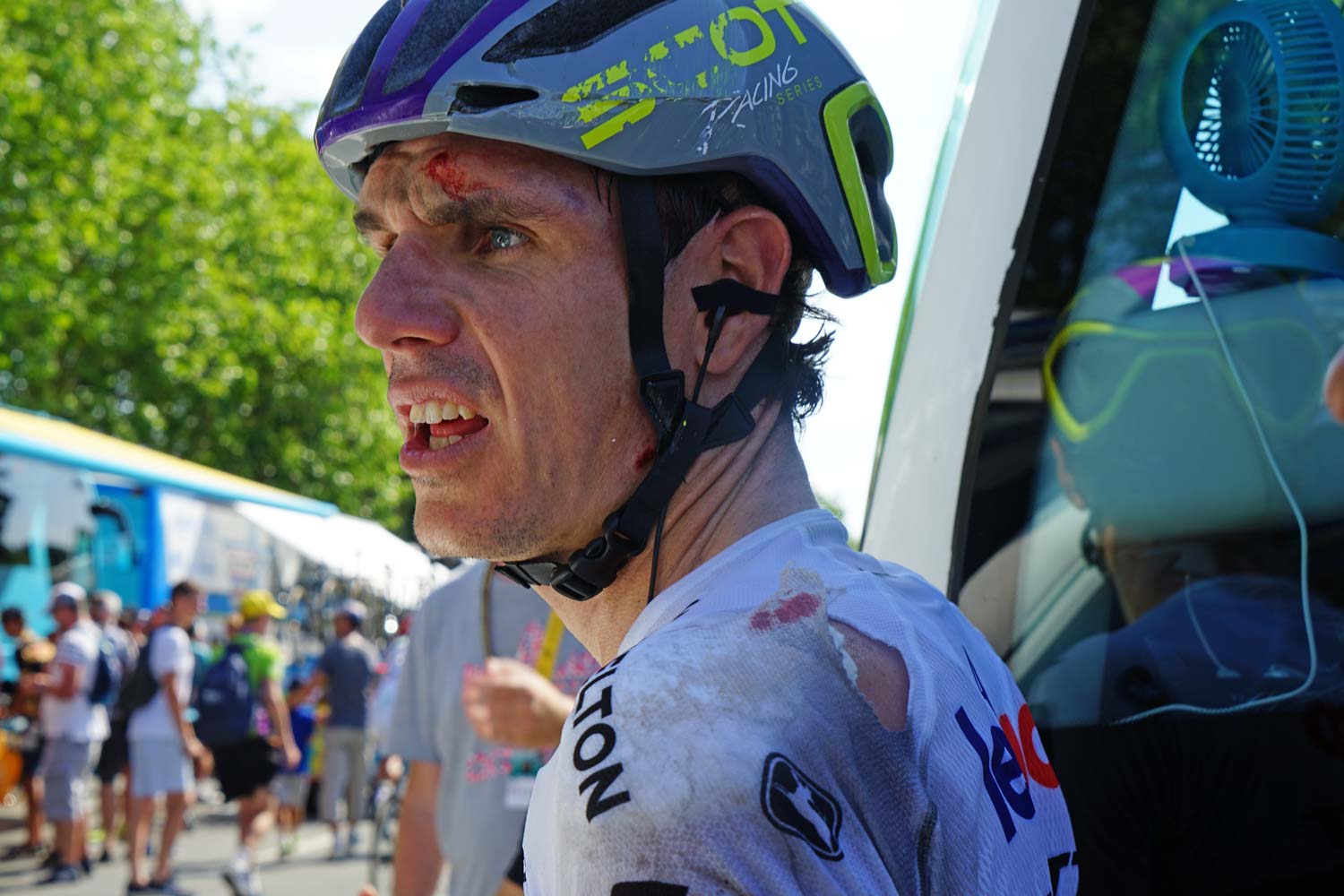 Impey is the only rider from the Australian-registered team that won the TTT in 2013 still in the line-up at the Tour, but he crashed in stage two and is carrying a few minor injuries (above).

“I don’t think the order makes a huge difference,” said Hepburn on Friday. “It comes down to the way you ride it.

“Obviously the number-one thing is carrying speed – it’s all about speed. It’s not about watts or numbers or anything, the thing that wins is who goes the fastest so we’ll have to be on a fast, smooth and, hopefully, technically correct ride.”

Hepburn is ready for the challenge but he knows that it’s not going to be an easy day on the roads around Cholet. “The team time trial is the day I’m looking forward to the most in the first week. We’ll be trying to win or come very, very close. I think it’ll be between us, Sky and BMC. I don’t think there’ll be a lot of time differences and we also have to think of GC.” 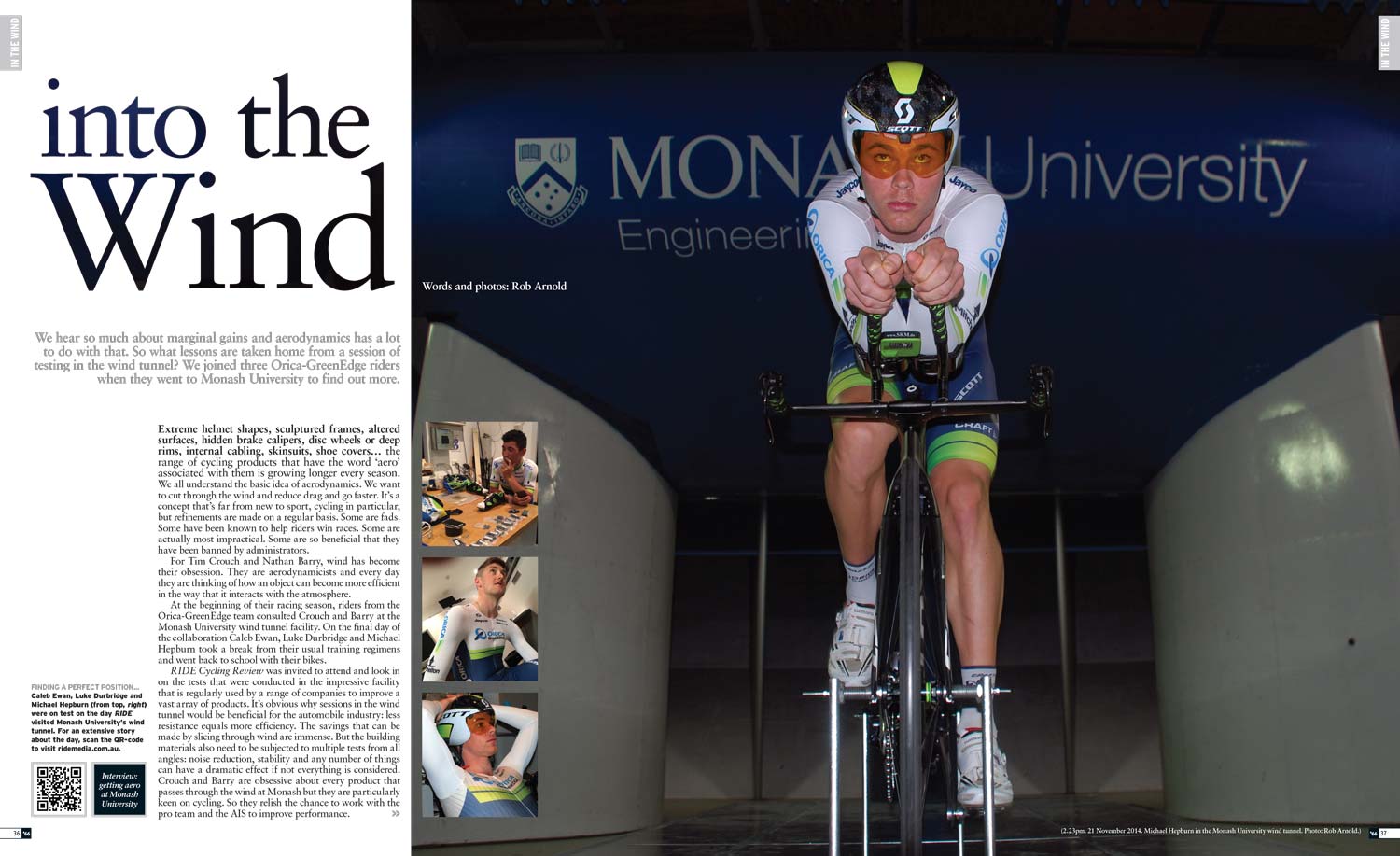 Click the photo above to read about the lessons of the wind tunnel.

Lessons from the wind tunnel

“I’ve been to the wind tunnel a few times,” said Hepburn about one of the methods teams employ to ensure that no watts are wasted. It is arguably more important for the team pursuit which is in a controlled environment but the benefits are also obvious in TTTs.

Hepburn’s wind tunnel testing has been with both track and road bikes and he has made minor alterations to positions and equipment based on lessons learned.

“Obviously, when new equipment comes out – new frames, wheels, helmets – it’s good to test that and test positions out.

“We’ve also got a new helmet, that has just been launched for this Tour, that Scott has been working on for some time. We’ve been testing that out in the wind tunnel and we’re pretty happy with the results.

“Obviously, nowadays all the teams are looking at such small details and I think all the teams are quite similar in terms of aerodynamics with clothing, with bikes, wheels… everything is at such a high level that you really need to try and find whatever advantage you can. And I think we have a good package.”

Hepburn’s last race before July was the Tour de Suisse. “He was off the back of the bunch every day,” said one observer, “I’m surprised he made selection for the Tour.”

What wasn’t known is the circumstances behind his ride in Switzerland.

“The Tour de Suisse certainly didn’t go that well for me,” admits Hepburn. “I wasn’t originally down for the race. I got a call on the Friday afternoon, having just walked in the door from a few big days of training… and was told, ‘Get ready, you’re due to leave.’

“Luke Durbridge, who was originally meant to do that race, got sick so I had 30 minutes to pack my bag and get to the airport.

“After a few days there, I was already on my hands and knees but I just tried to get through and do what I could for the guys.

“I’ve had a good recovery period afterwards and I’ve been up at Andorra training with a few of the other guys who are here and I’m feeling really good. I feel like a completely different rider to three weeks ago.”

Dropping weight: from track to road

“I would say I’m about four kilograms lighter now than at the Olympics,” explained Hepburn. “In the few months before the Olympics we were really focussed on gym work and, obviously, the power. The team pursuit is a power event now – it’s just a long sprint.

“I naturally put on muscle quite easily so it wasn’t too hard of a task getting up there to around the 80kg mark for the Olympics but last year and this year I put in a lot of hard yards to try and change the engine into a more aerobic one.

“We’re racing for six hours day-in, day-out and you have to be able to handle the load.

“It has been quite a tough task over the last couple of years, getting the weight down again, but I’m certainly noticing the benefits.”

A few years ago, when known as Orica-GreenEdge, stages three and four of the Tour de France were a dream scenario for the Australian-registered team. The 2013 race was the team’s second start and Simon Gerrans famously beat Peter Sagan in a sprint in Calvi and give GreenEdge its first Tour stage win on the island of Corsica before the ferry set sail for mainland France. The next day, ‘Gerro’ and his cohort backed up and set the fastest average for a TTT in the history of the Tour; Michael Albasini, Simon Clarke, Simon Gerrans, Matt Goss, Daryl Impey, Brett Lancaster, Cameron Meyer, Stuart O’Grady and Svein Tuft covered 25km in just over 25 minutes. They beat Omega Pharma-Quickstep by less than a second but it was a significant coup.

Gerrans took the yellow jersey. Impey later inherited the race lead. And there was much rejoicing.

Five years later, of that selection, only Impey remains. The South African crashed in stage two of this year’s race but he’ll be a pivotal rider for the team that’s chasing the yellow jersey in 2018… in the third week, not the first.

Hepburn knows he’s got a job to do and with Yates, Impey and Durbridge all nursing wounds from the opening weekend, the debutant has been handed additional duties by proxy. He is a powerhouse and we wait to see if he can help deliver the team another TTT win.