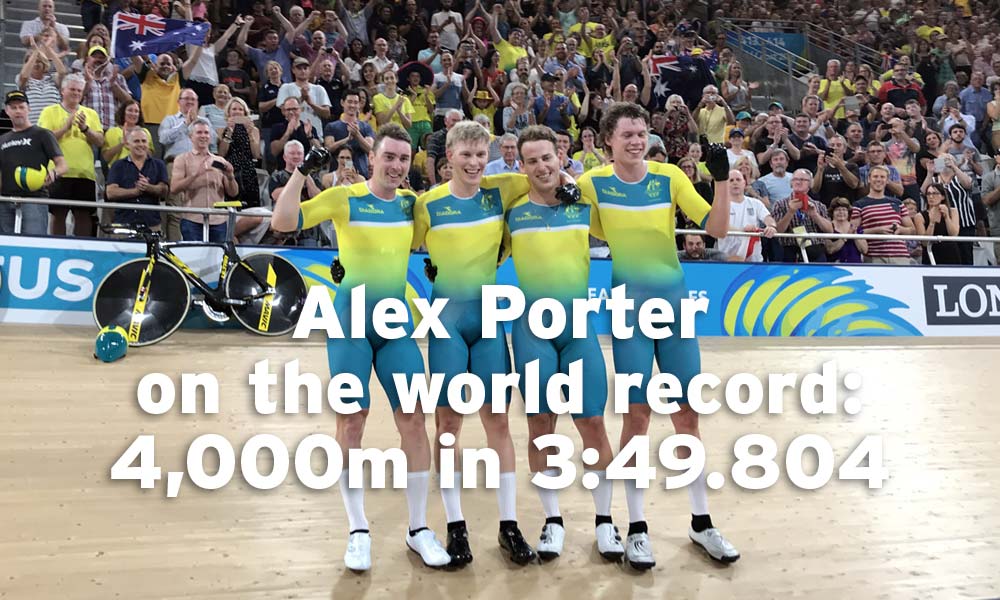 It happened as they planned it: a fast ride to win gold at the Commonwealth Games… and, along the way, break a world record. We talk to Alex Porter about his part in a remarkable race in Brisbane.

He spent the morning travelling from Brisbane to the Gold Coast to appear on the Sunrise program. Alex Porter was also interviewed by the major Australian TV networks as well as the BBC and a host of other media outlets who are fascinated by the concept of racing a team pursuit in 3:49.804.

That’s a time to remember: 3:50 has been eclipsed and an Australian team has set the standard.

What comes next is anyone’s guess but it seems the Aussies are riding towards another Olympic final… that’s the end goal but first we take a moment to consider one of the impressive steps along the way to Tokyo.

RIDE: It’s the morning after the day before which was an amazing time for Alex Porter and his cohort from the Australian Cycling Team that broke a world record and went under 3:50 for the first time in a team pursuit. Congratulations…

Alex Porter: “Thank you very much.”

It’s been a bit of a buzz. I understand you’ve been on Sunrise and you’re talking with all the television networks. Does it feel like you’ve put cycling in the mainstream?

“Yeah definitely. I wasn’t expecting to get the sort of reception that we’ve gotten from last night. It’s sort of… I just feel a bit overwhelmed by it, to be honest.

“With everything that happens with the track – with nationals and stuff – no one hears about anything. You go to the world championships and you don’t really get much from it. But with the support we’ve got from everyone [at the Commonwealth Games] it’s been really, really nice.”

You’ve had a taste of what it’s like to pull on a rainbow jersey. You did so with an amazing time last year in Hong Kong. Now you’ve eclipsed the 3:50 barrier. It feels kind of special seeing 3:49, doesn’t it?

“Yeah, well and truly. Even still now looking at it.

“It’s weird to look at, to see the 49 there instead of a number starting with a ‘5’. Every time I look at it, I can’t help but smile. It’s going to take a little while to get used to seeing that.”

Let’s just talk about some of the specifics of the race because team pursuiting has got many, many intricacies. It was made a little bit more complicated yesterday by a false start [for the English team]. You managed yourself really well and you came out of the gate both times like you were ready to smash a world record.

“Yeah… that false start definitely wasn’t something I was prepared for. But I actually didn’t mind it to be honest because it gave me a little chance to get a little bit of an activation on the gear and just get a feel for getting the bike out of the gate.

“I just came back around, recomposed myself, got back in the gate, just went through my same process and knew that if I followed that, I’d be fine. To be honest, I didn’t find the false start that much of an issue.”

That’s interesting in itself. Now, we have a lot of respect for the Commonwealth Games and we appreciate that a gold medal is fantastic. But my commentary is based around the time. Were you always going to be chasing a world record? Or you just wanted to beat the English team?

“We definitely wanted to have a crack at the record. Our goal here, first and foremost, was to win the gold medal… we didn’t go to the world titles so we’d be ready for here. So, our main objective was to win the medal. But we definitely had in the back of the mind, if we went out – and everyone did what they had to do – that we’d be able to get somewhere close.

“It ended up working out beautifully. We definitely had that thought of going for the record; just seeing that we could get as close as we did at the worlds the year before…”

Can you explain the sequence? You’re [the] starter and who followed you and what was the line-up?

“We went with [an approach] where each person only had to do two turns so we just tried to stretch the turns out a bit longer and it ended up working out pretty well.”

It was Leigh who dropped off, is that right?

And that was Kelland on the front at that time?

“Yeah, that was Kell on the front…”

Just watching on the television it looked like an extreme turn of pace. Was that the fastest moment of the bike race?

“Well and truly! Looking at the splits afterwards he was pretty unbelievable. He was absolutely moving at that point, once Leigh swung up.

“We told [Kell], ‘You’ve got the last turn – it’s either going to be two laps or two and a half. Whatever. Just sprint to the finish line, empty yourself out and Sam and I will just have to hold your wheel.’

“When he sprints, he really… the moment he put the gas down, I had a little split-second thought of, ‘Geez, I’ve got to switch on here – make sure I can hold his wheel…’ and he just went full-gas to the finish.

“Without his turn like that at the end, we probably wouldn’t have got [the world record].”

It was remarkable to watch. The team pursuit has got so many little nuances. Can you talk to me [about the detail]? Was there anyone who did a longer turn…? The sequences [and length of turn] was all predetermined?

“Yeah, we had a plan of what turns we were going to do going into [the race].

“We had Sam doing a longer turn in the second half, in his second turn. He’s got the experience. He’s super strong. So, we knew he’d be able to deliver off the long turn and get us far into the race.

“By that point, it was just between Leigh and Kell, depending on how each of them were feeling, to just get us through to the finish line.

“By the time Sam had peeled off, we had about four laps to go and it was just between the two of them: just go as hard as you can and keep the pace on and get us to the finish line quickly.” 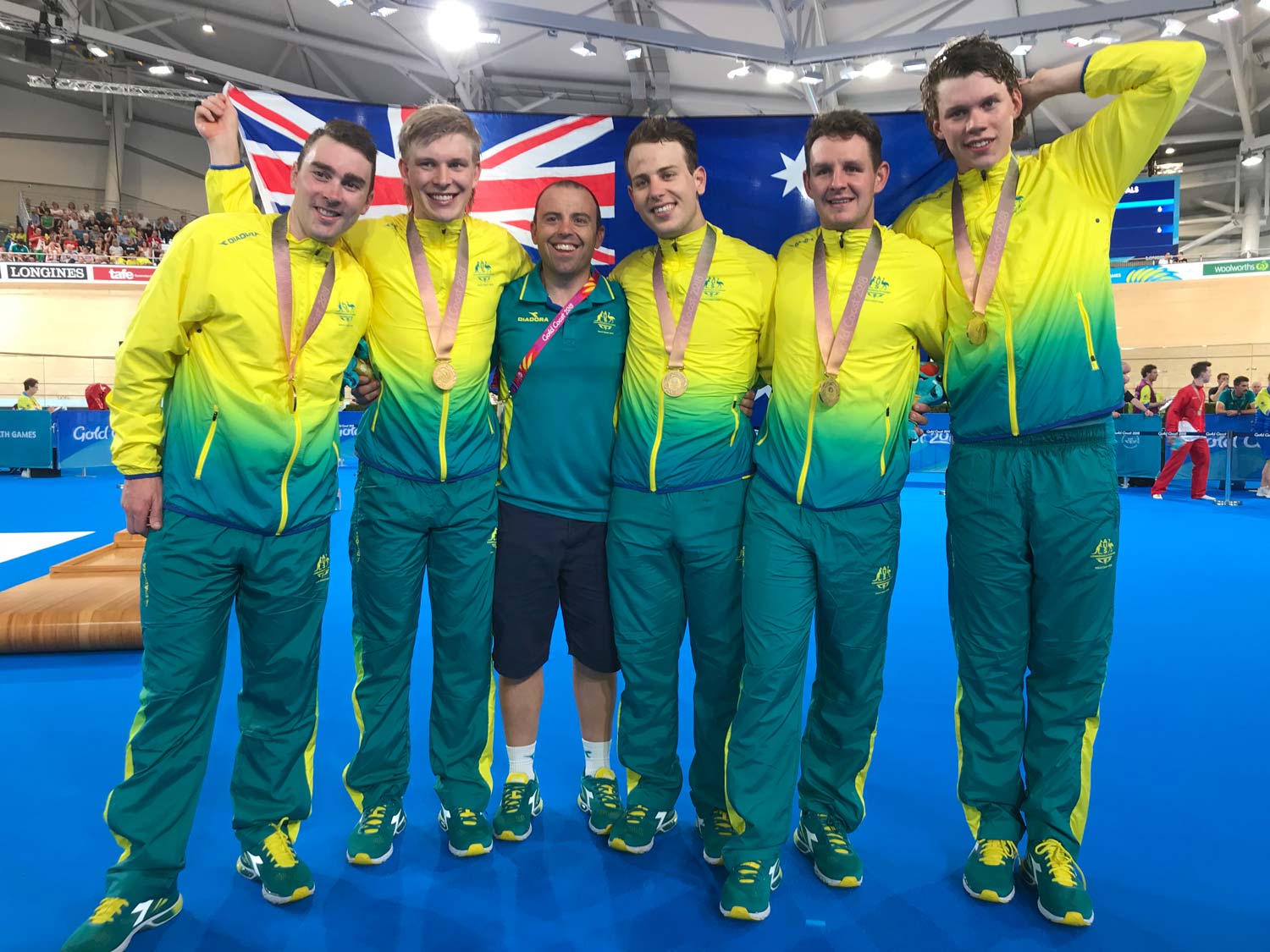 Is that the end of your Comm Games requirements?

“Yeah, it is. I’m reserve for the scratch race but all the boys are going really well so I’d only race that if something goes wrong. Fingers crossed nothing bad will happen. All the boys deserve to be doing what they’re doing.

Whenever we hear of remarkable achievements in cycling, I like to ask the question about power. We could sort of do a bit of maths but I wonder: can you tell me your weight and can I ask a gearing and have a little hint of what your power output was?

“We didn’t have power meters on our bikes. So, we ourselves have been wondering that.

“Kell and I said afterwards, ‘I wonder what power we would have actually averaged for that…’ but we didn’t have anything on our bikes.

“It was just, ‘We’ll go out and do the result. We’ll worry about the power and stuff later.’”

Okay, I guess next time you go and break a world record – as if you do it all of the time – we’ll ask if you could do it with a power meter on…

“Yeah, that’s definitely one thing we’ve thought [about]. If we could break the world record again, just have the power meter so we can get some sort of insight into what it was.”

I know you guys ride a lot on the track and you would have done countless rehearsals for this. My understanding is that you’ve gone under 3:50 a couple of times in training. Is that a correct assumption?

“We hadn’t gone under 3:50 from a standing effort. We’ve done some flying four kilometres… and done some really quick times doing that but we hadn’t gotten anywhere near the 50 mark in training.

“We have been close to it in the middle of training blocks knew that, once we had the taper, that we’d be able to get the extra seconds that we’d need to get there.”

Is there a lot of gym work in the preparation for something like this or is it all on the bike?

“Yeah, well and truly we had a lot of gym work – our gym coach Christie Taylor – has worked tirelessly with us all to make sure that we’re all strong enough to be able to put out the power that you need to do the effort and also, with the speed we’re going, be strong enough just to get the bike moving with the gears you’ve got to push these days.”

We see you almost popping a hernia when you come out of the gate. That can’t feel nice but it certainly looks like an extreme power lift, if you know what I mean…

“It’s a maximal effort and it puts a lot of strain on the legs but once I do my start and swing up, I know that the boys underneath are going to look after me and they’ll ride a smooth ride so I can get back on the back and focus on recovering, to be ready for my next turn.”

It’s a good analysis of an incredible ride. The hope is that this kind of thing offers a bit of inspiration for people who are watching sport in general. Do you think that this will prompt a few more people to come to the velodrome and have a crack at it?

“Oh, hopefully. From just the support I’ve had this morning from people walking down the street saying how proud they were of the ride we did last night and how awesome it was to see, hopefully it does get more people to come out to the velodrome because track racing is such an awesome thing and hopefully we can start to get a bit more of a following behind it.

“All the different races – not even just the pursuit… you know, you’ve got the keirins on tonight and the Madisons and it’s such an awesome [discipline]. It is a lot of fun, not only for the riders but all the spectators – it’s a great atmosphere so hopefully, with something like that, we can start to get more people coming out to it and getting involved.”

I’m being a bit ambitious but I’m looking at the starting list for the individual pursuit (which boasts Jordan Kerby, Sam Welsford and Kelland O’Brien) and I wonder if [Australia] might get one, two and three… is that possible?

“I certainly hope so. The boys have been absolutely smashing it in training. They showed yesterday they’re all on good form, so I guess it’ll depend a bit on how everyone backs up from the team pursuit. A lot of the other riders who are doing it have raced the team pursuit so anything is possible and the way these boys have been going, one-two-three would be really nice.”

I hope you get to go to the velodrome once again and enjoy the atmosphere and thanks for taking the time to have a chat about your fantastic world record ride.

“No worries. Thanks very much for chatting to me.”