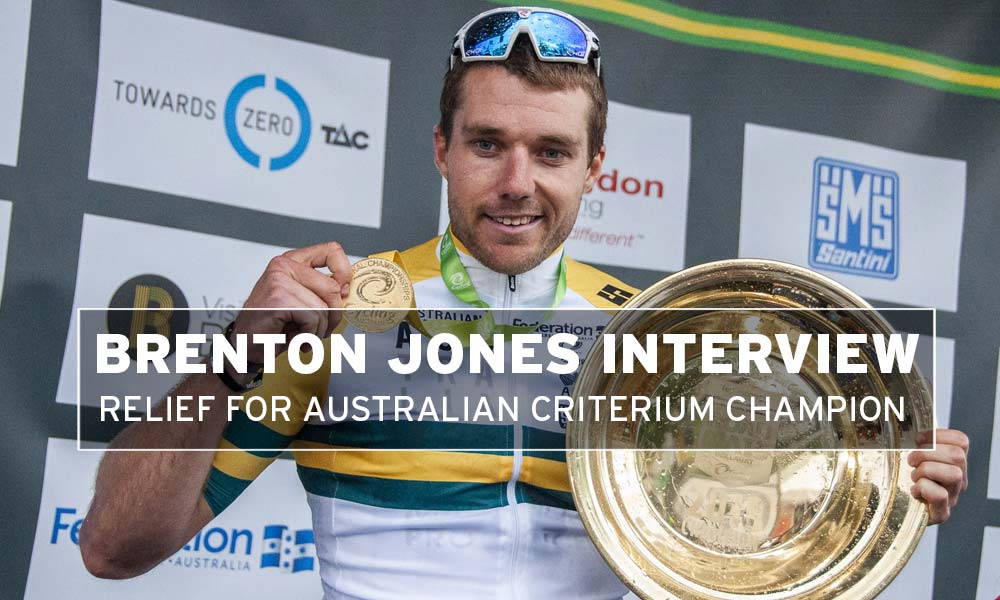 Four previous podium appearances suggested that Brenton Jones’ time would come to win the Australian criterium championship. On the first Friday night of 2019, it happened: first ahead of Tristan Ward and Jay McCarthy.

He admits that the road race isn’t one that suits his strengths and that, in all honesty, his French trade team would probably not even consider entering him into a battle of attrition like the one we’re used to seeing on Mt Buninyong on hot Sundays in January. But the criterium? That’s another story.

Brenton Jones has been knocking of the door at the nationals for a few years now and although consistently close, it wasn’t until 2019 that he finally snagged himself a gold medal and a green and gold jersey.

He is a powerful rider who is always willing to have a chat about his cycling and encourage others to get out there and have a go. He’ll do the same again on Sunday, clip in and have a crack at the road race and this year he’ll do so knowing that he’s already ticked off one of the to-do items on his list.

– Click the SoundCloud file to listen to RIDE Media’s interview with Brenton Jones and/or read the transcript below. –

RIDE Media: It’s the day after the night before when Brenton Jones finally became the Australian national criterium champion. It’s something that’s sort of been coming for quite a while, in fact, and it must feel nice to win a race but also a giant sense of relief for you…

Brenton Jones: “It’s massive… it’s a race that everyone knows I go to every year wanting to try and do as best I can.

“I think three bronze and a silver up until last night was where I was at. And I really wanted to get the win. It’s something that’s been a long time coming and it’s such a relief to finally tick it off.”

I’ve seen Tristan Ward, the runner-up’s power file, and I know he’s peaking at around 1,200 watts. I said to his coach that drag-racing you in January is a hard thing for anyone to overcome. What were your number? I know you’re a lot bigger than him but what were you pushing?

“I always hit big numbers in the nationals, especially that crit.

“Again, I wasn’t fresh. Obviously, I raced a few Bay Crits before then and it’s a hard crit but the numbers were good enough for me to win on the night, which is fantastic, but I guess it shows the form and what those numbers can be – and how, essentially, better they could be.

“My numbers can be a little better than that.

“Tristan put up a great fight and great numbers from him… but it was definitely a hard-fought run to the finish.” 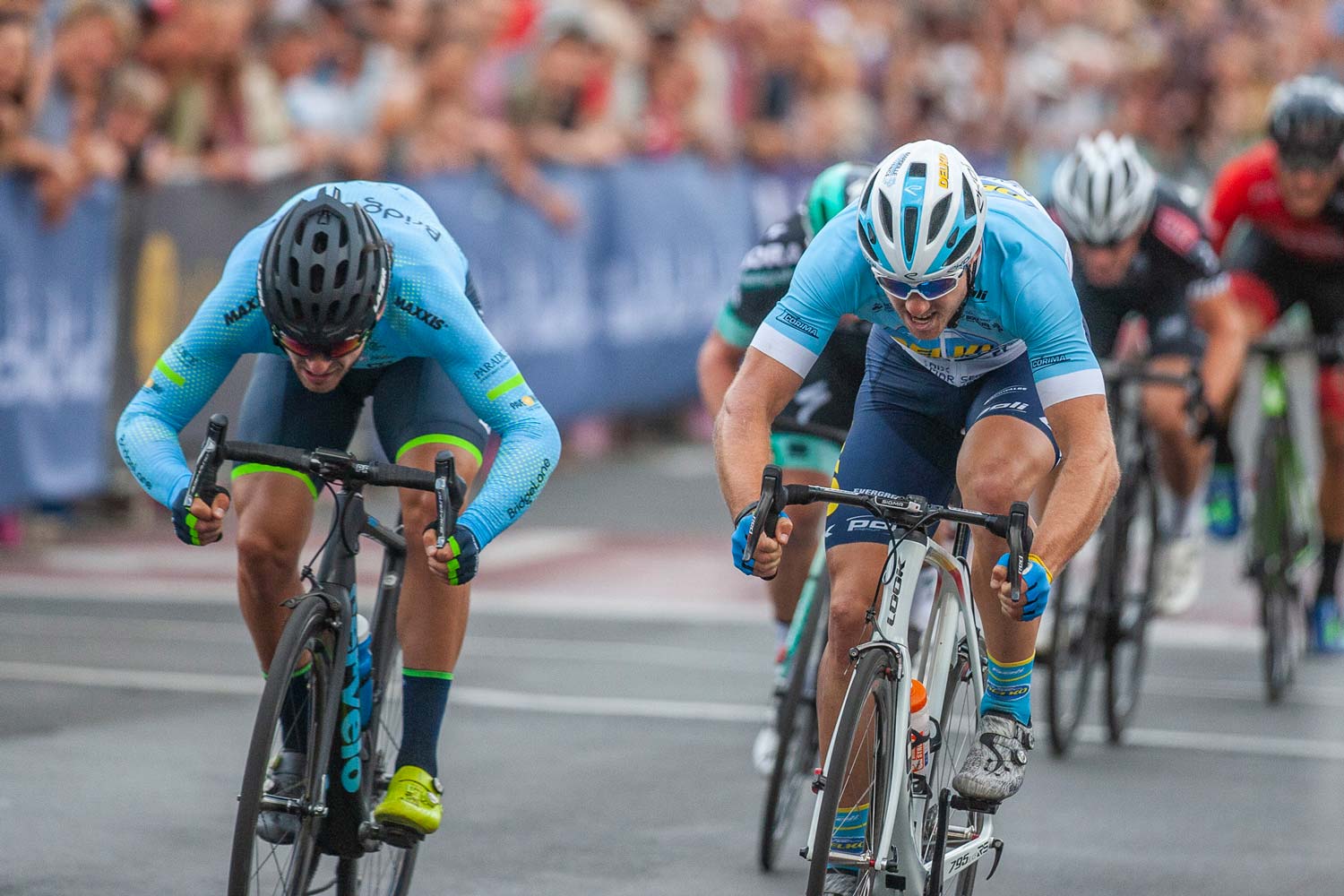 Tristan Ward hit out early in the sprint and very nearly pulled off a coup, but his former MTB team-mate Brenton Jones powered past at the crucial moment (above).

It’s a difficult one to ride without team-mates but you know what to expect. Were you riding off the coat-tails of anyone in particular, or did you just freestyle?

“Look, freestyled most of the race; tried to be a bit out-of-sight-out-of-mind kinda thing. And I think in the last few laps, when I moved towards the front, I think there were a few people that thought, ‘Oh well, shit… he’s still here.’ That, I’m sure, played to my advantage and, come final corner, I think I played it smart and let the Bridgelane and Sunshine Coast team fight it out.

“I think out of the corner I had the best line… and I know Neil (van der Ploeg) and Tristan got a good jump to the line.

“I was waiting for (Robert) Stannard and Leigh Howard to kick but they just didn’t have it.

“I thought, ‘Well, if I wait any longer Tristan is going to wrap this one up – it’s a pretty impressive sprint, he’s gone early here as Rebecca Wiasak did and she won comfortably too.’

“I thought, ‘It’s going to be the same situation so I need to go too; he made me go early and thankfully, like I said, I had the power and the numbers last night and the motivation to really get home to that line.” 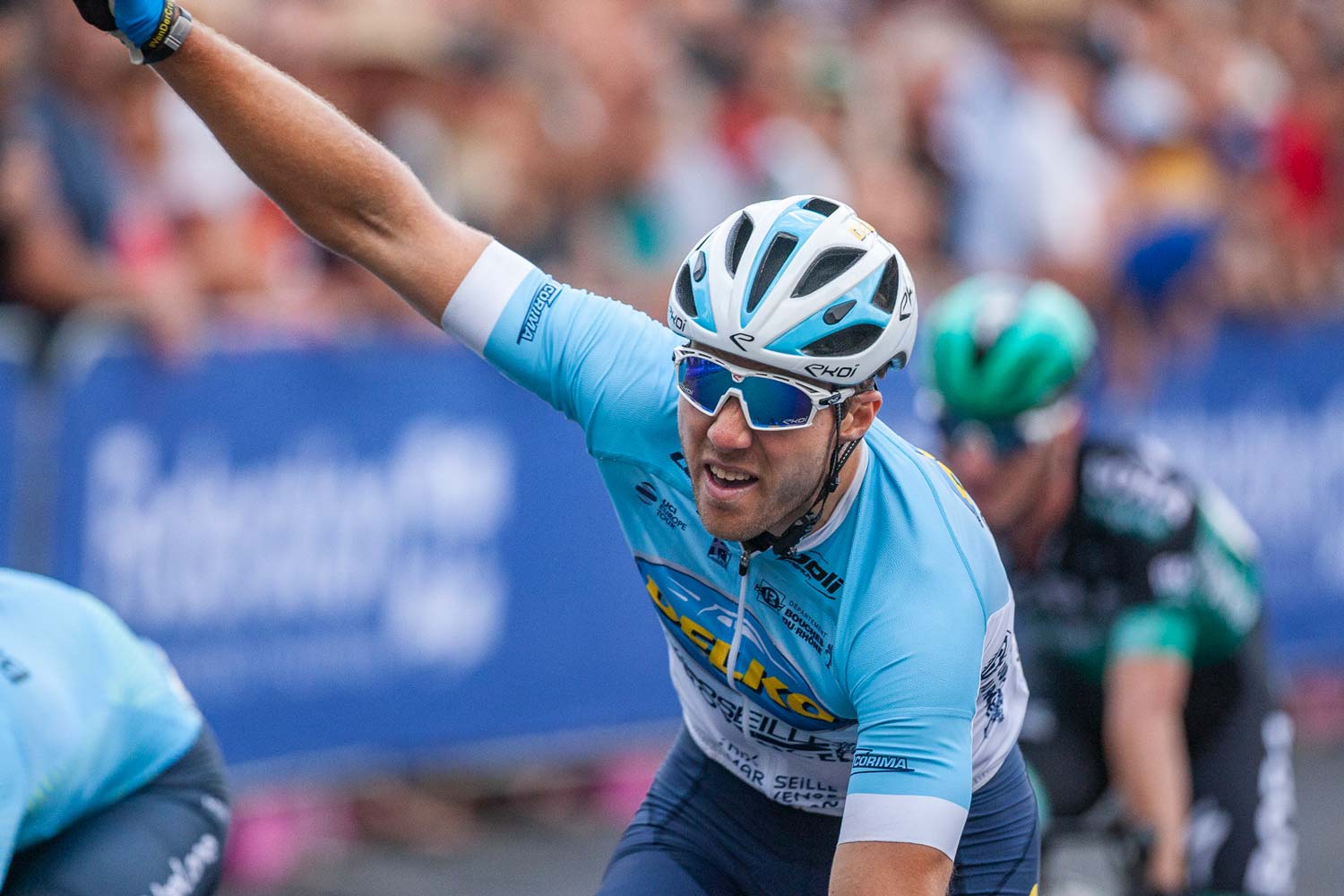 Just talk to me quickly about the new bike. You’ve got a Look. I don’t know the number of it – 795 probably…

With some SRAM Red eTap and Corima wheels, it’s a completely different set-up but you’ve obviously adjusted to it well.

“It’s a fantastic bike. It’s a lot stiffer than the KTM last year, it was a good bike but the Look definitely is in a class of its own.

“It’s a very nice bike to ride and so far this season it’s going quite well.”

And adjusting to SRAM Red… have you been on that last year?

“Yeah, we were on that last year so have had one season prior on SRAM and the eTap stuff. It suits the way I like to shift. I know there’s a lot of people who say I shift too much but I come from a mountain bike [background], so I use the gear box every minute.

“I maybe shift a bit too much but, you know what? You can get over it because that’s how I ride.

“I like the eTap – the way it shifts – it makes me use both levers the whole time rather than changing the front derailleur on the left and not touching the left lever for the whole race until the climb or the finish line.

“I like the way that it shifts; it’s smooth and crisp and it suits me.”

Do you use ‘Blips’ [remote shifting buttons from SRAM] on the handlebars or not? 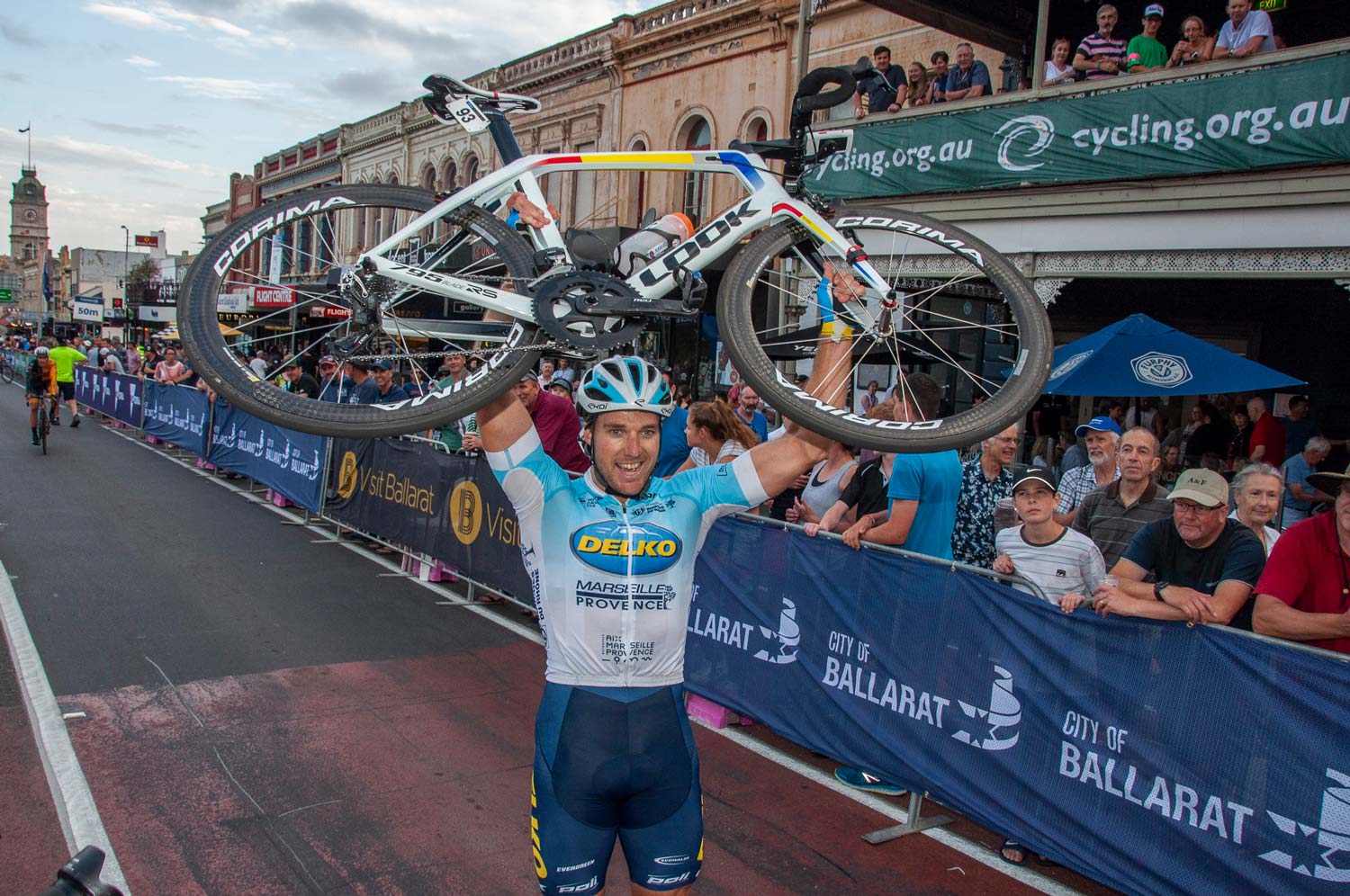 Alright, moving along from power and from tech… I guess it’s lovely to see your mum, Karen, on the sidelines [and] able to watch you win. I know it’s a big family project, these January campaigns. Can you explain what input she has on your cycling career?

“Oh, for sure. As you said [it is] massive. She’s a big support to cycling in Australia and Victoria from an events point of view – and always has been for the time that I’ve been going through the sport. I think it’s definitely helped to have that personal connection with some of these events and help with things like the Bay Crits and the nationals, when she used to work with CA.

“It means a lot to her as well, to be putting in the hard yards, but also to have a son who is up there and getting the rewards as well. Both mum and dad and my whole family have been massive support to help me get to where I am. I think the victory last night is just a long journey coming – and shows the support of everyone who has believed in me all the way. That victory was for them.

The crowds…? I heard someone say they were slight down on last years. But you’re a regular campaigner there, what did it feel like?

“I said to someone at the start of the race: ‘It’s a bit bigger.’

“It felt like a better atmosphere. I’m not sure what the numbers were compared to previous years, but I think that what the crew at GTR Events and CA did… they put on a nice show and the little beer garden thing that was in the middle near the finish line, I think that attracted a good crowd in there to view the criterium on Sturt Street there.

“I think Ballarat makes a good criterium there because you can see [the riders] going on both sides and it’s not a square when you see them once and, a minute later, you get to see them again. You get to see them a few times and I think that was good for the crowds.” 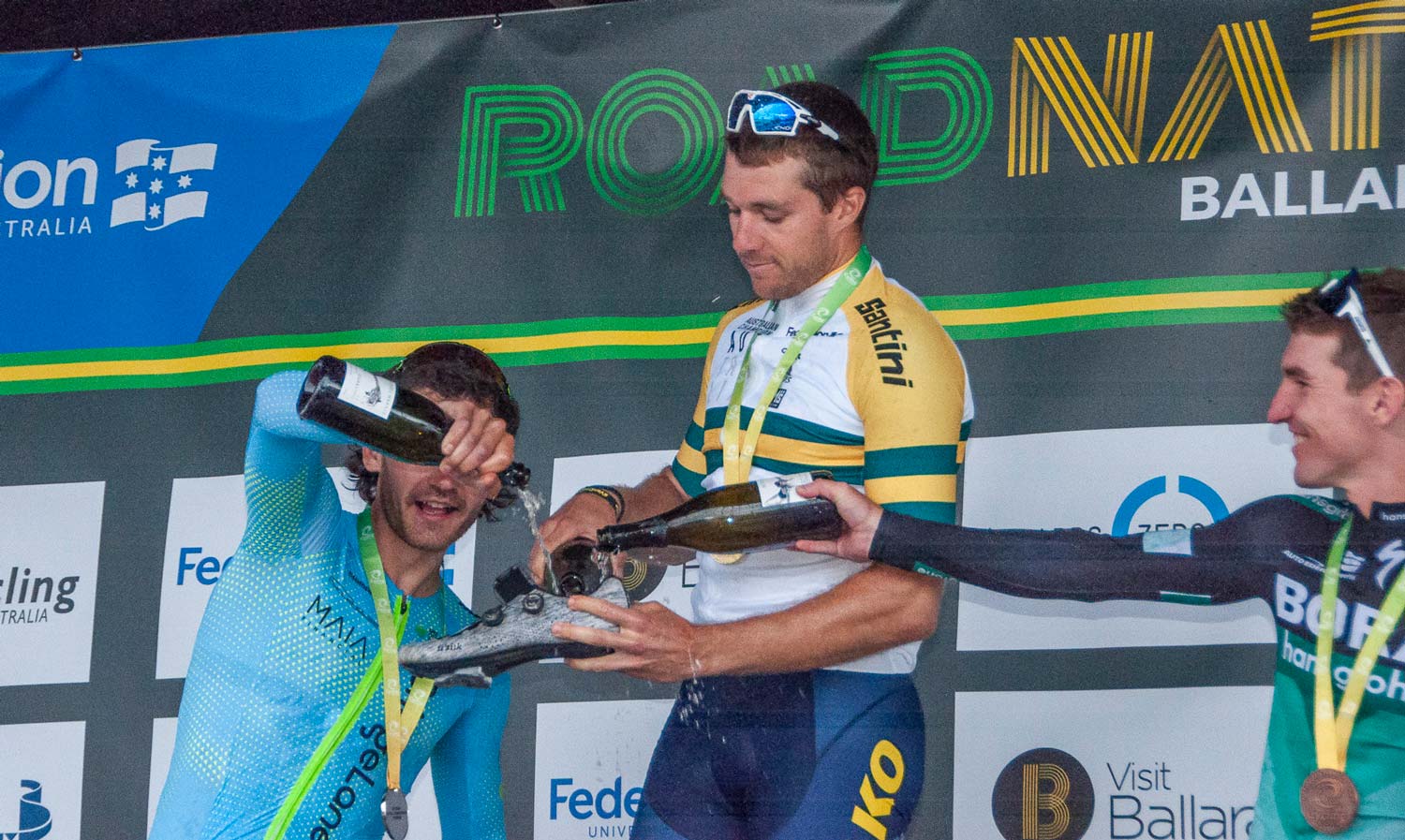 A bubbly brew in a shoe… Ward, Jones and McCarthy all contribute to the mix.

Talk to me about Sunday. Are you going to battle it out and see if you can manage the traditional Race Of Attrition?

“Yeah. Well, I’ll give it a crack for sure but when there are guys resting their legs for Sunday and I’m out there smashing the Bay Crits and last night’s crit as well, I think it’s pretty obvious that my priorities were last night – and I’ve ticked that off.

“Sunday is going to be a race which I’ll show up to and definitely put in my best performance – but whether that’s to finish and race well, or whether it’s to put myself into a break, or ride well during the race… whatever the result, I’m going to still be satisfied with going away this weekend having achieved what I wanted to.

“Sunday is such a brutal race: 16 laps of Buninyong, it’s something that, in a general race, I wouldn’t even be selected in the team for Delko to race a race like this.

Talk to me about the absence of Caleb [Ewan]. He’s beaten you quite a few times now in the [criterium], what was his explanation of the non-appearance?

“Uh, I think he’s got a good chance of winning on Sunday so it’s probably a smart move.

“If he does well on Sunday, he’s probably going to pat himself on the back and think how the extra day of recovery after the Bay Crits – after he picked up some good results there – think that’s a smart move, for him to try and focus on a race that he has got probably a slightly better chance than me of winning…

“If he wins and takes the jersey to Lotto [Soudal], I think he’ll be quite happy. I think he’s put all his eggs in one basket: Sunday, and good on him.”

I heard a rumour sneaking around yesterday that he was considering not starting on Sunday. Have you come across that one?

We don’t trade on rumours so we’ll just go back to what we were actually originally talking about and say, congratulations on a fine win – I know you were waiting on it for a long time and it’s a pleasure to have a chat.

“I appreciate that Rob, thank you.”

All the best for the next little while and we’ll talk when we get the opportunity.

“Sounds great. Thank you very much.” 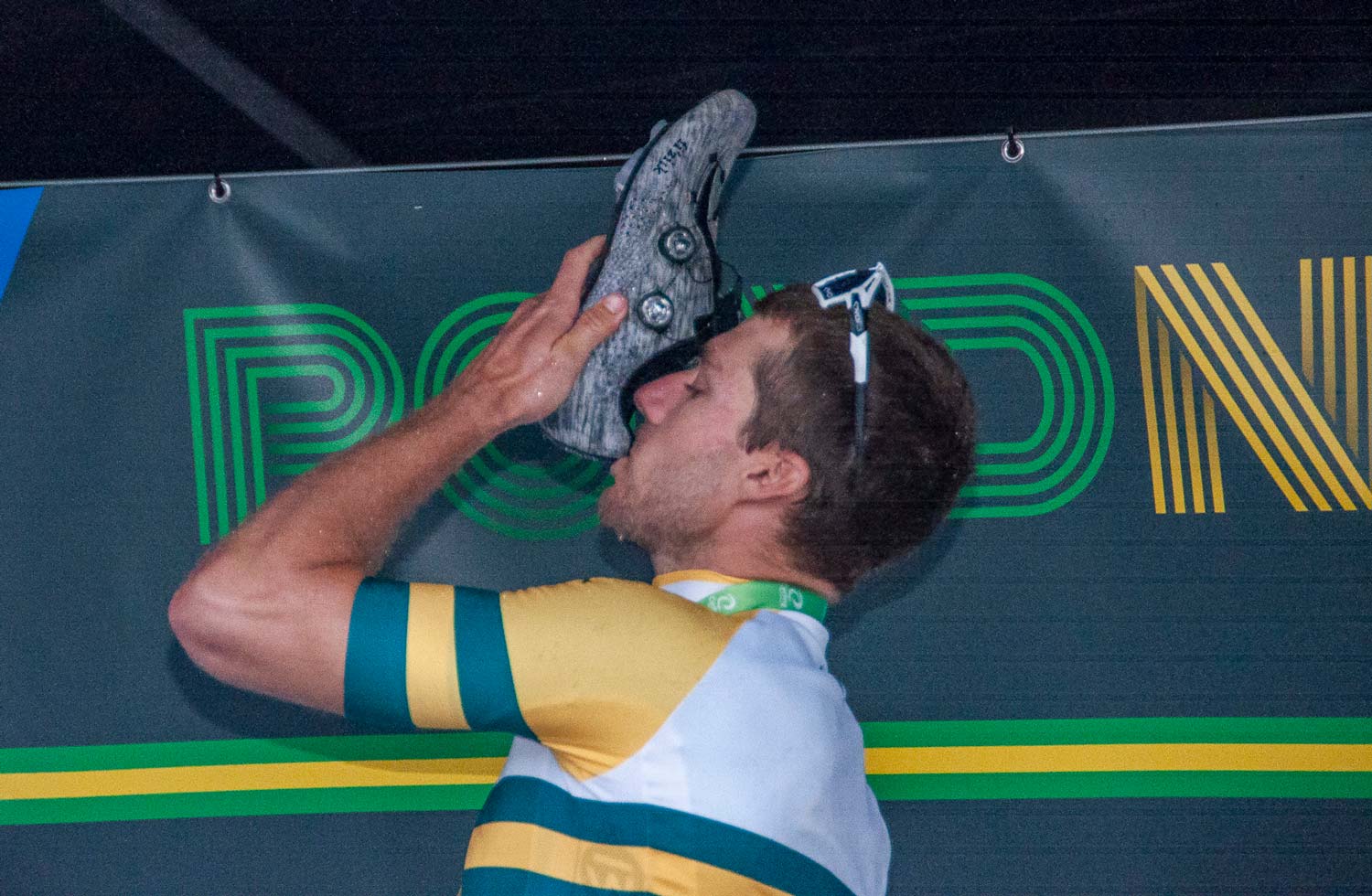