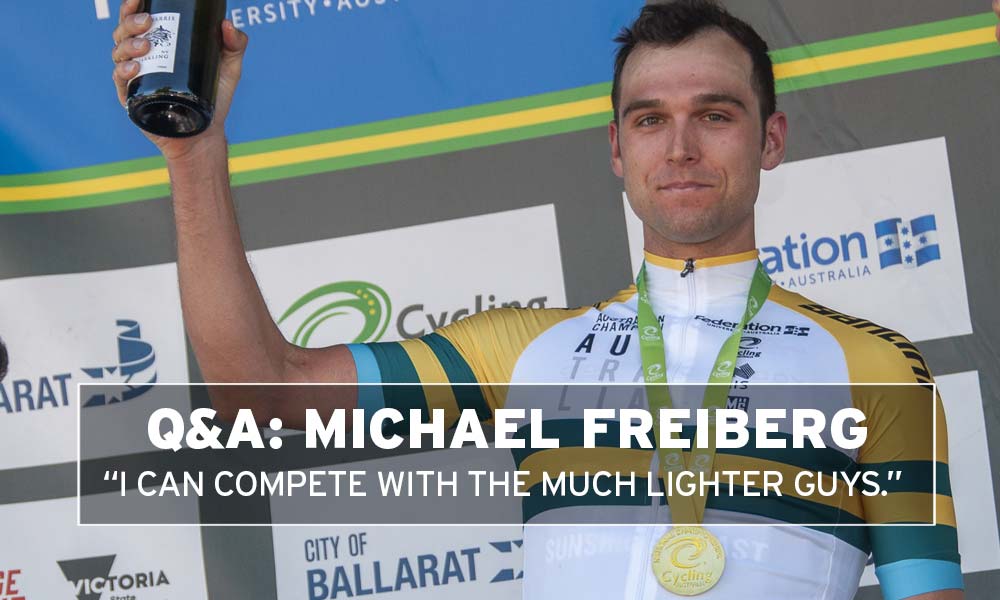 Interview: Freiberg – “I can compete with the much lighter guys”

It was a race that caught the attention of cycling fans around the nation: live on TV on a Sunday afternoon, we saw Michael Freiberg pull off an impressive coup. Here’s is what he had to say a few hours after winning the national championships…

RIDE Media: You pulled off the ultimate coup really… when we see you in a break, we’re used to it – these are the things that you do. Did you expect that you could go on and on and on like you did?

Michael Freiberg: “Yeah, it was an interesting one. Just looking at the field we knew that it was going to be hard all day and it had to be hard all day. So, I thought: ‘I’ve done the work, so I’m going to have to give it a go and see how long I can survive out there in the break because I know just how impossibly hard it would be back in the bunch.”

Okay. But it couldn’t have been easy at the front.

“No. No, certainly not but I think that style of riding at the front suits me a little bit better because, from what I could tell, a lot of really fast guys like Ben O’Connor and Heinrich Haussler were absolutely flying up climbs. And I know, from experience, I just can’t climb that fast.

“I have to hedge my bets and get out in front and we actually had a really good group working there.” 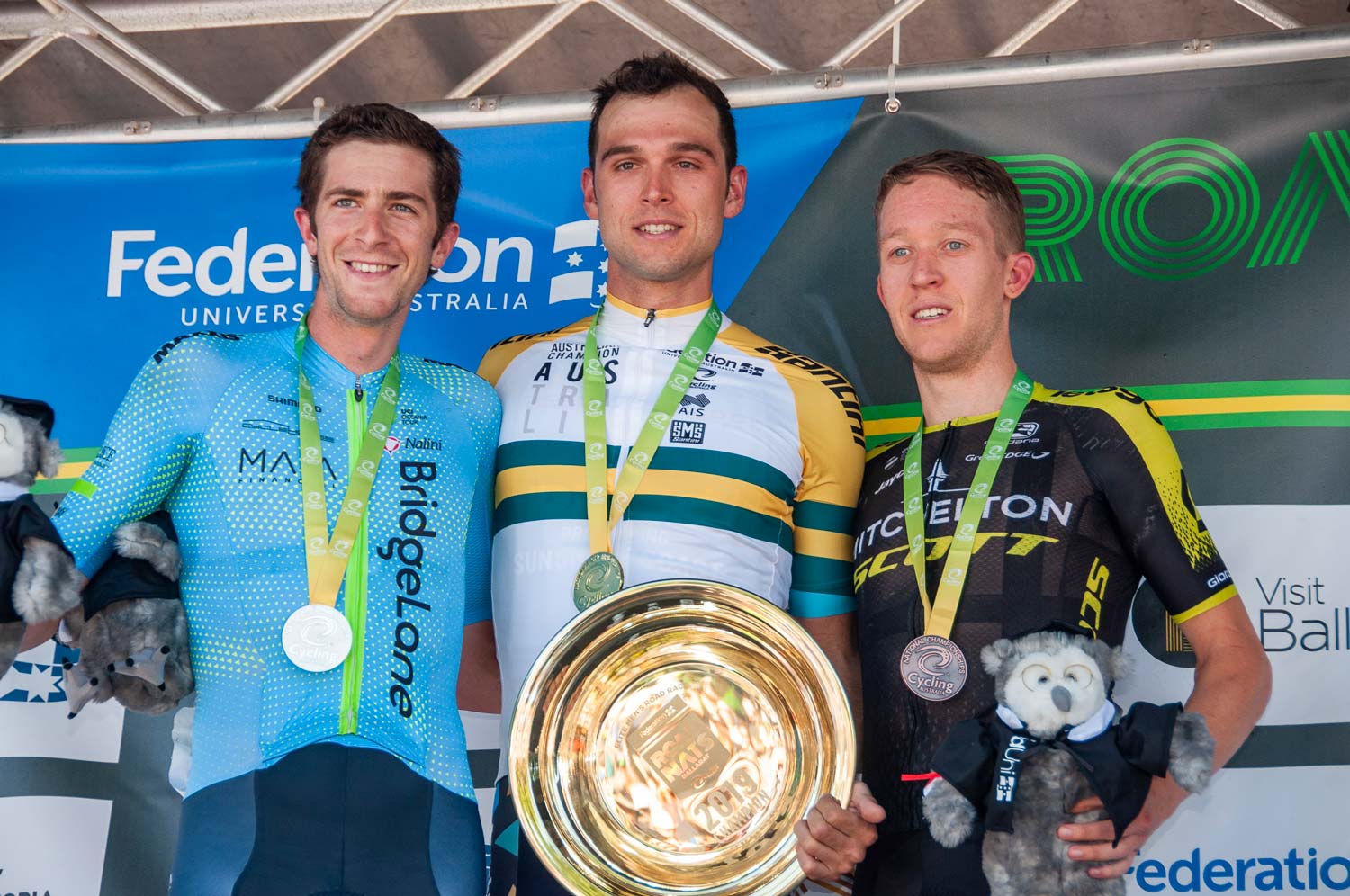 Let’s give a quick shout-out to Chris Harper if we could because if you robbed anyone, it was that poor guy. He worked his butt off… and so did Cam [Meyer]. But Chris was amazing. Can you just give a couple of words about him? He was your team-mate last year…

“Yeah, Chris was my team-mate last year and he was on the podium [at the nationals] last year, in third place.

“He was really one of the guys to watch.

“There were rumours going around that he was even stronger than he was last year, which is absolutely phenomenal. He certainly showed it out there.

“He attacked us with three laps to go, I think. And I was like, ‘Oh boy, I’m struggling to get around this just one lap at a time – and he’s just gone that early…’

“So, the way it turned out was: Mitchelton had three guys (Alex Edmondson, last years winner, along with Luke Durbridge and Cam Meyer) and they started to ride. We eventually bought [Harper] back but that by no means ended the attacks – and we saw that they went down the road again.” 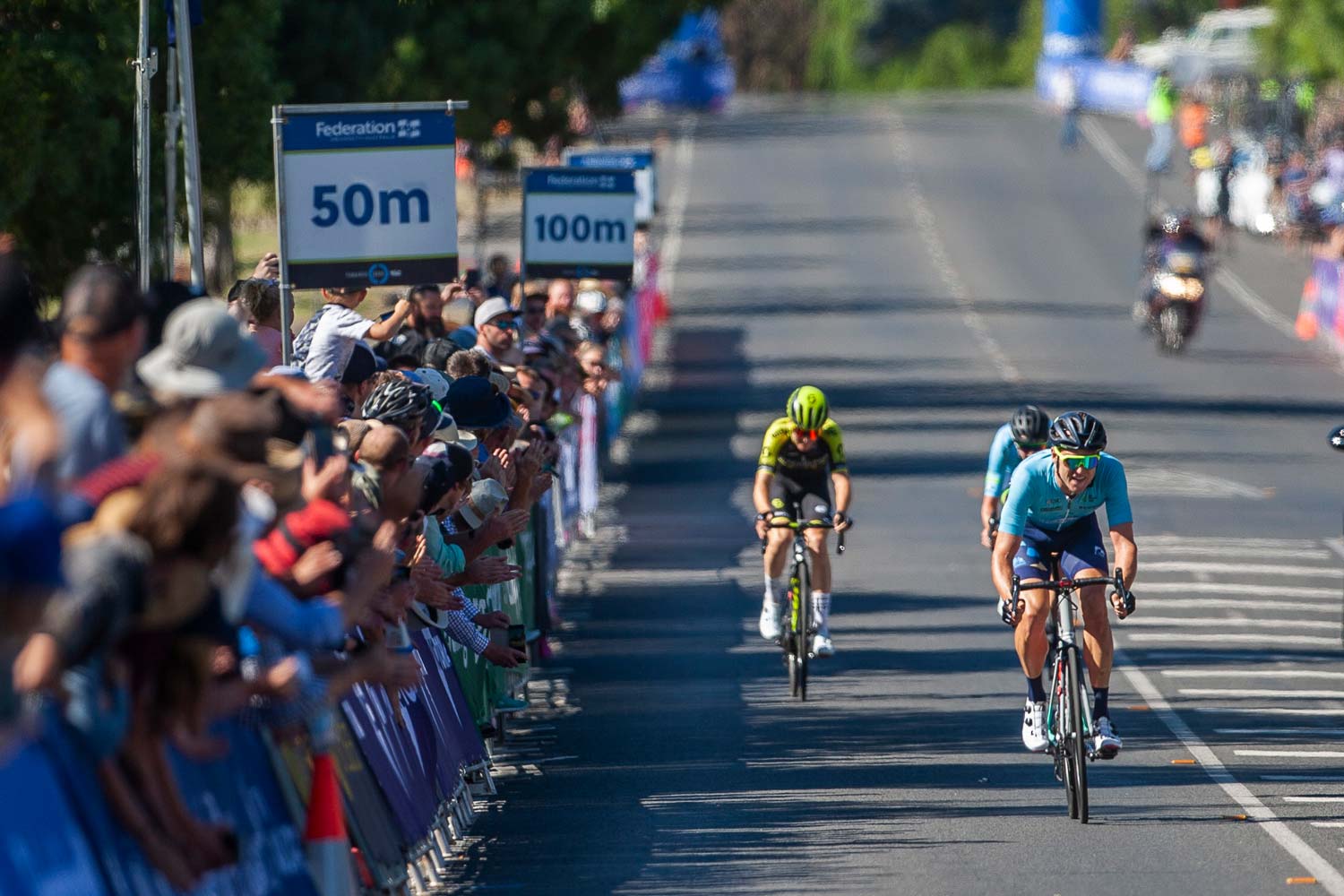 Freiberg jumped into the lead just before the 1km to go banner… and held on to score a fine victory.

Let’s just go to the crunch time; when the two got away and it was pretty much last lap… I don’t know if you’ve seen the footage but they were definitely freewheeling and [playing cat-and-mouse] games with one another. What was going on with you at that time?

“I got tailed off. Chris had attacked on the left-hand turn onto the second half of the climb. I got distanced by about 20 or 30 metres and they had a fair bit of a gap over the top and that just extended even further when they started working together.

“For me, I was cramping the whole first half of the climb, so I was just praying to get up the hill, praying for a podium – because I was going to come to a standstill, that’s how bad I was cramping.

“But I managed to get over the climb and the directors, when they come past, are all pretty supportive. They talked to me, gave me a bit of motivation to keep chasing and I think I was a bit more worried around Durbridge coming from behind and missing out on third place in the end.

“So, I tucked in and just did what I could – and I was really surprised to come up on them.

“As we turned into the headwind on the home straight, I was like, “Far out, maybe we’ve got a chance here…!’ And that’s how it turned out.”

When you bridged [the gap], you knew you couldn’t sit on them because you had to hit them with a surprise. What sort of speed were you going at that moment?

“I don’t actually remember. I was getting as aero as I could; I had my head down and then I came up on them and thought, ‘Oh, okay… it’s going to be a sprint, maybe I can firstly improve my position from third place to second place…’ because I just how quick Cam is, especially at the end of a bike race.

“So, you see me freewheel up to them and then I was like, ‘Oh bugger, I’m going too quick here…’ so I decided to hit them on the other side of the road.

“And that’s as simple as the decision was: I was going too quick and I just sat back in the seat and pushed on.” 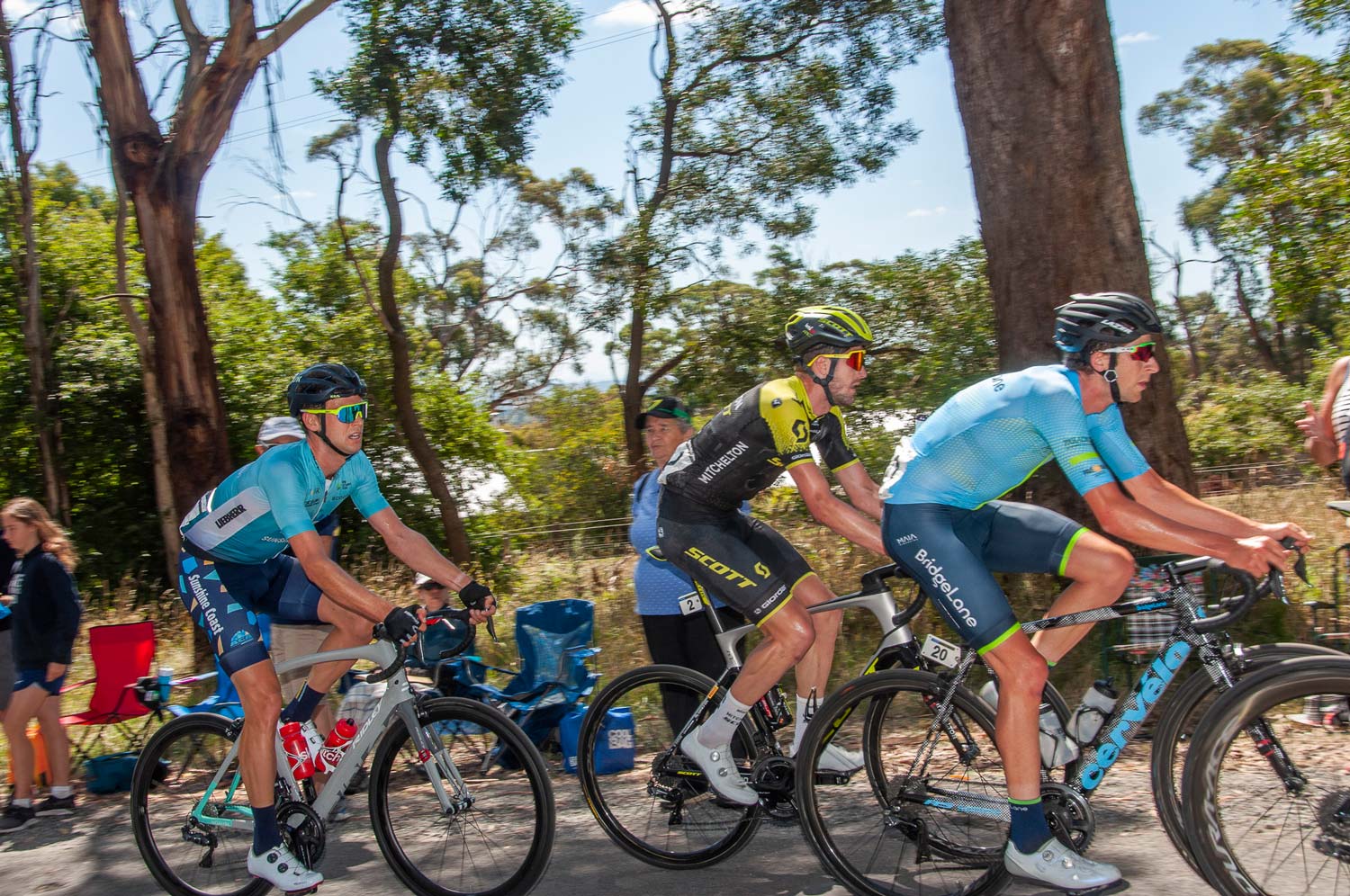 You had it won. You knew it. You knew that they couldn’t bridge. Were you giggling at that point, before the victory salute?

“It’s actually a surreal feeling and I don’t think it’s one I’ll forget soon: just looking down that home straight at about 200-300 metres to go and seeing clear road in front you – there’s no one there, there’s only the two blokes behind you – and you’re about to win the national title.

“It was something that I don’t think I’ll ever forget.

Talk to me about the support you got from [team manager] Ben Kersten. You’re new to the team and you’ve given the ultimate reward in the first few days. How did that all play out that you moved from Bennelong to what is the Australian Cycling Academy?

“Yeah so, at the end of last year Andrew [Christie-Johnson, from Bennelong-SwissWellness] told us he was taking a step back and he thought it would be a good time to change teams and try something new. They’ve got a really good program in Europe and also really good racing in Japan and I think it’s really good there, to develop young riders – especially the Asian scene.

“So, I switched across with him and they’ve got a lot of young guys coming through, and I’ve taken a bit more of a mentor role in the team, being one of the older riders there. It worked really well.

“I raced with Ben in 2011 in America, so we spent a whole season in Colorado racing over there and in China, so we know each other pretty well. He’s always been a big supporter of mine and when the opportunity arose, he was happy to give me a hand.”

We’ve seen you in and out of the national team for various reasons over many years. What will happen now? Do you anticipate racing the Tour Down Under, for example?

“A lot of people have said that the Tour Down Under is the next big thing for me, but I still haven’t had any word from the national selectors and I think there’s a lot of administration stuff that they’ve got to work through with the registered testing pool and pre-selections and stuff like that. So, we’ll have to wait and see what the official word is.

“For me, I’ll have to sit tight and keep training and hear what they say.”

But if the call-up comes, you’ve done all the paperwork necessary? 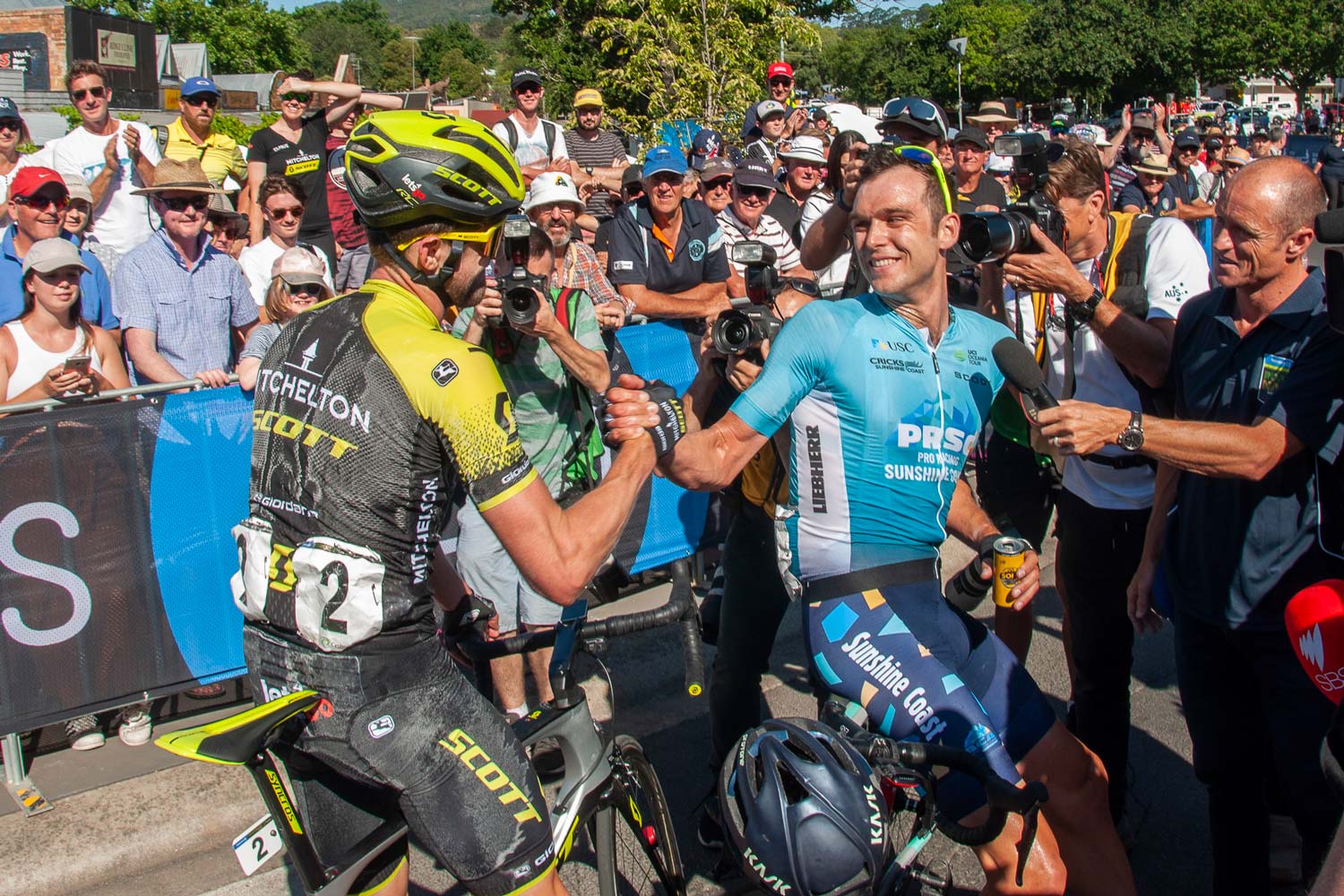 I’ve just written… let’s call it an emotive piece, one sort of stirred from the buzz that you generated – I was having a good time watching the race… and I talked about the influence of your invention, the AirHub. It really did bring you back to the race scene, didn’t it?

“Yeah, it’s been a long project actually. Today’s race was almost six years or seven years in the making, trying to work out how to train better and build the base to get [form].

“I’m probably the heaviest guy to win the national championships, at 83kg, and [I had to] get around Buninyong 16 times. I mean, you’re just not fit for that – I’m just not built for that. But by changing the way I train, I’ve been able to get myself to a point where I can compete with the much lighter guys.

“I’m really proud to be able to put it together and have it come together on the day.”

You’re a highly analytical bloke. You think a lot about what you do. I’m looking forward to the blog that you write once you’ve analysed your data. It’s going to be a rip-roaring tale, I’m sure. Congratulations on everything you’ve done. Thanks for chatting to us for eight minutes and 15 seconds… it’s a pleasure to hear your take on what was a marvellous race.

“Yeah, I’m still pinching myself. It was one that I’m going to enjoy for the rest of my life, I think.” 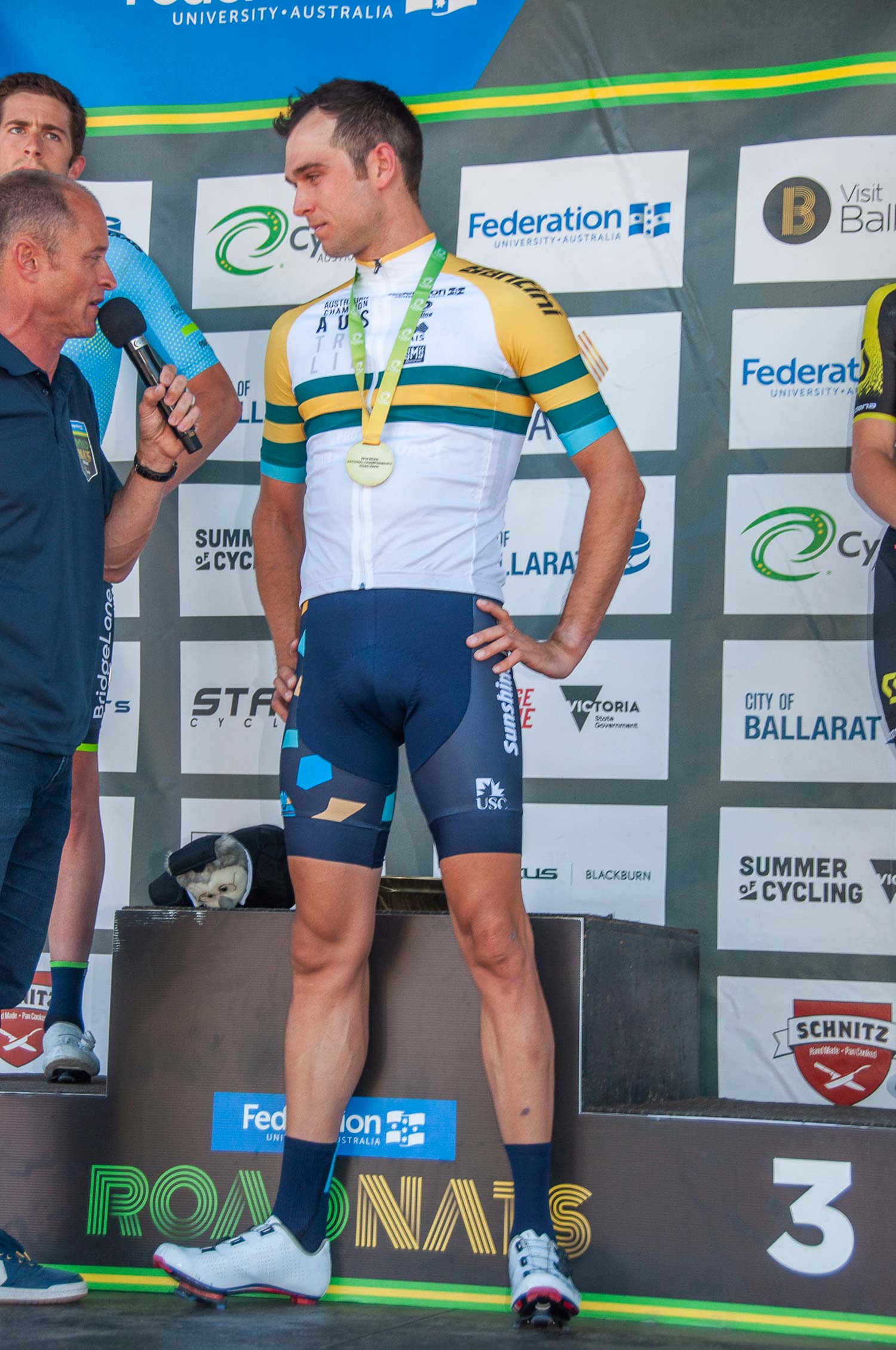