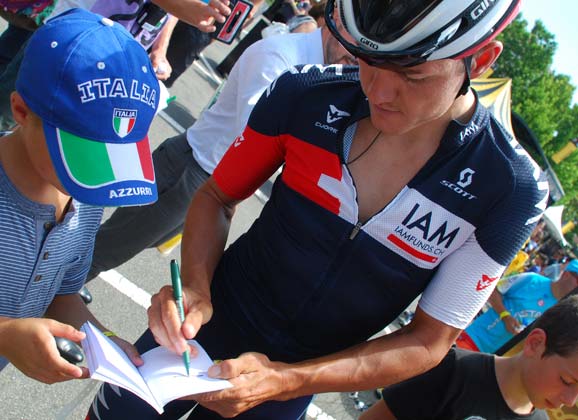 He’s a rider with pedigree and panache. He has won a stage of the Tour de France and the Vuelta a España. He has been plagued with injury during his 10 years as a professional but when he’s not got a broken bone and is able to move freely, he’s fast. He’s Heinrich Haussler and he’s the new Australian champion.

Here is an exchange with Haussler the morning after he won the green and gold jersey.

RIDE: It’s a pleasure to be talking to you on a day like this, Heinrich Haussler…

I managed to get a little bit of a coup because a friend of mine helps with the [Cuore] clothing that your team wears and I know that you had a green and gold jersey made up already. You must have been expecting to have some decent form.

“Well, that was the plan. We came [out to Australia] with Roger Kluge and Dave Tanner a little bit earlier [than usual] – already in the middle of December – to do some hard training just to get used to the weather and get over the jetlag. You can’t just come over a few days before a race and be ready for it if you want to be serious about it.

“Even Tanner… I mean, he was still back in the group [in the finale of the national championships] but we both have very good form…

“With Simon [Gerrans] not being there with his broken collarbone, we just thought this race is going to be wide open so we had a chance-and-a-bit this year.”

I think a lot of people are going to be asking about your chain. So let’s just get that out of the way first: what happened? Was it the last pedal stroke that pulled it off?

“I’ve got so many messages with people asking me what happened but I have no idea. I have absolutely no idea what happened.”

I know one of your favourite expressions is ‘No Chain’, so it’s kind of ironic isn’t it?

“That’s the funny thing, so many people have sent me pictures and underneath they said, ‘Oh, you really had no chain today.’

“I really have absolutely no idea what happened. It’s just lucky it didn’t happen 50 metres before.”

How many nationals have you done in the elite…?

“The race situation – the way that things went in the race with attacks and groups going up the road – was very similar.

“I remember in 2012, I also tried to go with the group with maybe five or six laps to go and then Cam [Meyer] was out the front by himself and then there was me and ‘Durbo’… and with one-and-a-half laps to go the GreenEdge boys came from behind with Gerro on the wheel. They practically delivered him to the last hill and he rode away.”

Then we go to 2015 and you just lost contact on the last climb… then came the catch. Were you pretty confident that you’d get [the lead group on the descent]?

“Well, with two laps to go I already got dropped on the climb.

“Yeah, I got dropped because I couldn’t go with them… obviously.

“If I had tried to go with them, I would have stayed with them maybe for another 50 metres and then I just would have exploded completely. And then I would have been full of lactic acid and I wouldn’t have been able to ride to try and get back to them.

“I knew if I just paced myself and if I was not too far back over the top, I was hoping that they’d regather – because there were six guys from six different teams and I knew they weren’t going to work with each other. It was going to be cat-and-mouse. They were going to start attacking, not riding properly, and I knew I had a chance to get back.

“I played that card and it worked out perfectly.”

If you are riding on numbers, can you give us a little summary of what you were looking at going up that climb? How big was the wattage?

“That last attack that Caleb [Ewan] did was very, very, very impressive! For his age, a first-year pro doing 180km race like that and attacking like that on the last lap on the climb… he’s got a big future. He’s unbelievable.”

It is. A lot of people would have said that had he not done those attacks on the climb, he would have won it. What is your estimation?

“I don’t know but you’ve got to take your hat off to him. If I was his age, I wouldn’t have done anything different.

Yeah, he’s amazing to watch. At the finish did you have a few words with Caleb, and what did you have to say?

“Oh no, not really. I just went up to him and said, ‘Good ride mate, great sprint.’ That was pretty much it.”

There’s not much of him to come off but you were on his wheel and you timed your sprint perfectly. What numbers did you put out there? Can we go to your power? Do you know…?

At the end of over 183 kilometres, that’s a ‘decent’ output.

What about the others in that group. Did you feel like there was any ‘collusion’? Were there people working with one another because there was a good spread of teams…

“No. Like I said, the only good thing about it was when that second group went towards the end, Drapac was really committed; they had five guys in the group so they had to do something. They were just chopping off on the front and held the speed real high so the bunch behind couldn’t catch us.

“Otherwise, on the climb everyone was looking at each other, everyone was attacking, and then afterwards it was just full-gas all the way to the finish.”

“This is on a very high level. It’s unbelievable.

“I was in that first group there, the 15 guys who went up the road at the beginning, and we were out there for six or seven laps and then we got caught and I was like, ‘There are still 100 riders here!’ That gave me a big mental setback. I was pushing myself the whole day and then we get back to the bunch and there are still over 100 guys there.

“That was a bit of a turning point. I was almost ready to suck it in and just say, ‘Nah, stuff this – I’ll just work for Tanner.’

“But then [another] group went and I went with them again and all of a sudden I was back. I took some gels, had a good sensation on the climb – I was spinning – and I felt good again.

In that instance, when you’ve got the three kilometres of flat once you come off the hill and leading you to the finish, what are you thinking?

“It was all a bit of cat-and-mouse. Everyone was looking at each other. They’d stall and a guy would come from behind and one would instantly follow… and I was just glad.

“I didn’t want Caleb on my wheel.

“I knew it was a headwind sprint – a really strong headwind – and I think if he’d have been on my wheel, nah… he would have just gone around me easily.

“I think Bobbo attacked with 600-700 metres to go and he just went full. I think Caleb then went straight on his wheel and used [Bobridge] pretty much like a lead-out. Then Caleb [started his sprint] and I was on his wheel and I was just thinking, ‘Yep, this is perfect! The perfect situation…’

“All those sprints, they happen fast but in the back of your mind, it’s like slow-motion. It’s kind of weird.”

Have you seen the replay or are you just replaying it from your memory?

“I haven’t seen anything.”

Is it a sprinter’s trait to recall things in slow-motion, do you think?

What are we calling you though – are you a ‘sprinter’, are you a ‘Classics man’? What can we expect from you in 2015 in the green and gold jersey, Heinrich?

“I like to have a go at a sprint if the stage is hard and the good sprinters are gone or really tired… but sprinters like ‘Cav’ or [Marcel] Kittel – nah, I haven’t got that speed.

“I’ll try and have a sprint if there have been a few big lumps in the middle of the stage and everyone is a little bit tired. Or, the Classics – the one-day races: they’re the races I love.”

I know it’s January 12 but can you nominate a couple of dates – or races – for this year that you’ll be targeting?

“Pretty much all the Classics. All of them. That’s the main goal of the year.”

So December and January serve you well for April…

“Definitely. I’ve been training a lot, training hard. I’ve just got to be careful; already being in form in January is risky. You have to plan it and calculate everything very carefully to still have it in April.

“I want to do the Cadel Evans race, do Qatar and then I’ll have six or seven or eight days off the bike and then slowly build up again and start racing again at Paris-Nice.”