Lotto-Soudal announced the signing of an Australian rider on Monday: Harry Sweeny joins the Belgian team’s WorldTour roster next year and will ride out the 2020 season with the development team. 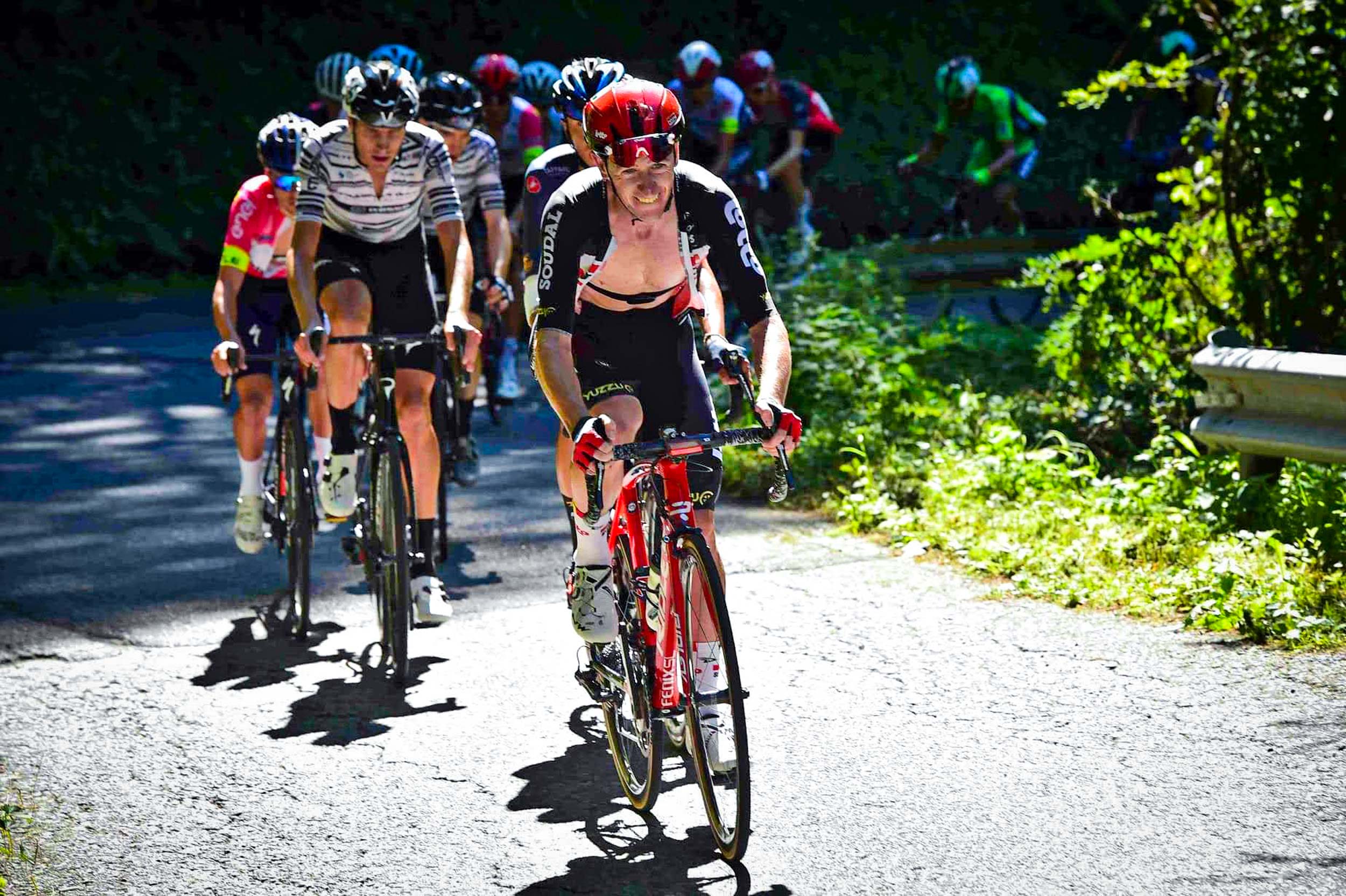 For me, this was a very interesting interview because it captures the very first discussion I’ve had with Harry Sweeny. Until the moment he took the WhatsApp call, while in the car on his way to a race, I’d not heard him speak. I’ve seen his name in results and heard about the progress he was making in the under-23 ranks, but there are many Australians who have done likewise over the years.

What sparked this introduction was a release from the Lotto-Soudal team. It explains the signing of the 22-year-old from Warwick in Queensland: “As a winner of a stage in the Rhône-Alpes Isère Tour, he joined the Lotto-Soudal U23 team in 2020, where he proved to be a versatile rider.”

Sweeny also offered a comment in the release. “I am particularly a rider for the Classics and a good lead-out guy,” he said in Lotto Soudal’s statement, “but I can climb as well.

“In the last Tour Bitwa Warszawska and Baby Giro the team was apparently more than happy with my performance and commitment for the team.

“I am super excited to join the WorldTour team, where I will find my compatriot Caleb Ewan. We know each other quite well. He can count on me.”

And so, I contacted him and asked: “Want to have a chat?”

He replied, “Sure. WhatsApp?”

Rob: Okay. Are you near the border? Are you going to switch networks soon? Or… how is it going to work?

Harry: “Aaaahh… let me just check. Give me one sec. I’m not actually sure where I am.”

Harry: “Ah. Yeah. So, we actually just crossed over.”

Rob: Okay. Welcome to France, I suppose. Uhm. I’m calling from Sydney. You just crossed from Belgium to France. And are you on your way to a race? What are you doing?

Harry: “Yeah, we’re on our way to Ronde de l’Isard now, so I’ve got a bit of climbing ahead. It starts on Thursday. So, I’m looking forward to that one.”

Rob: And what colours will you be wearing?

Harry: “In the Lotto-Soudal colours still, for this one. Oh, Soudal-Lotto, for this one actually, because it’s outside of Belgium.”

Rob: So, where do we begin? This is our very first introduction… it’s a nice way to meet someone who has just sort of joined the WorldTour peloton, effectively. Is that correct?

Harry: “Yeah, yeah, yeah. It’s been quite a long journey for me. But yeah, the start of next year is the beginning of the contract but it’s quite nice to meet this way really. It’s a good way to get off to a start.” 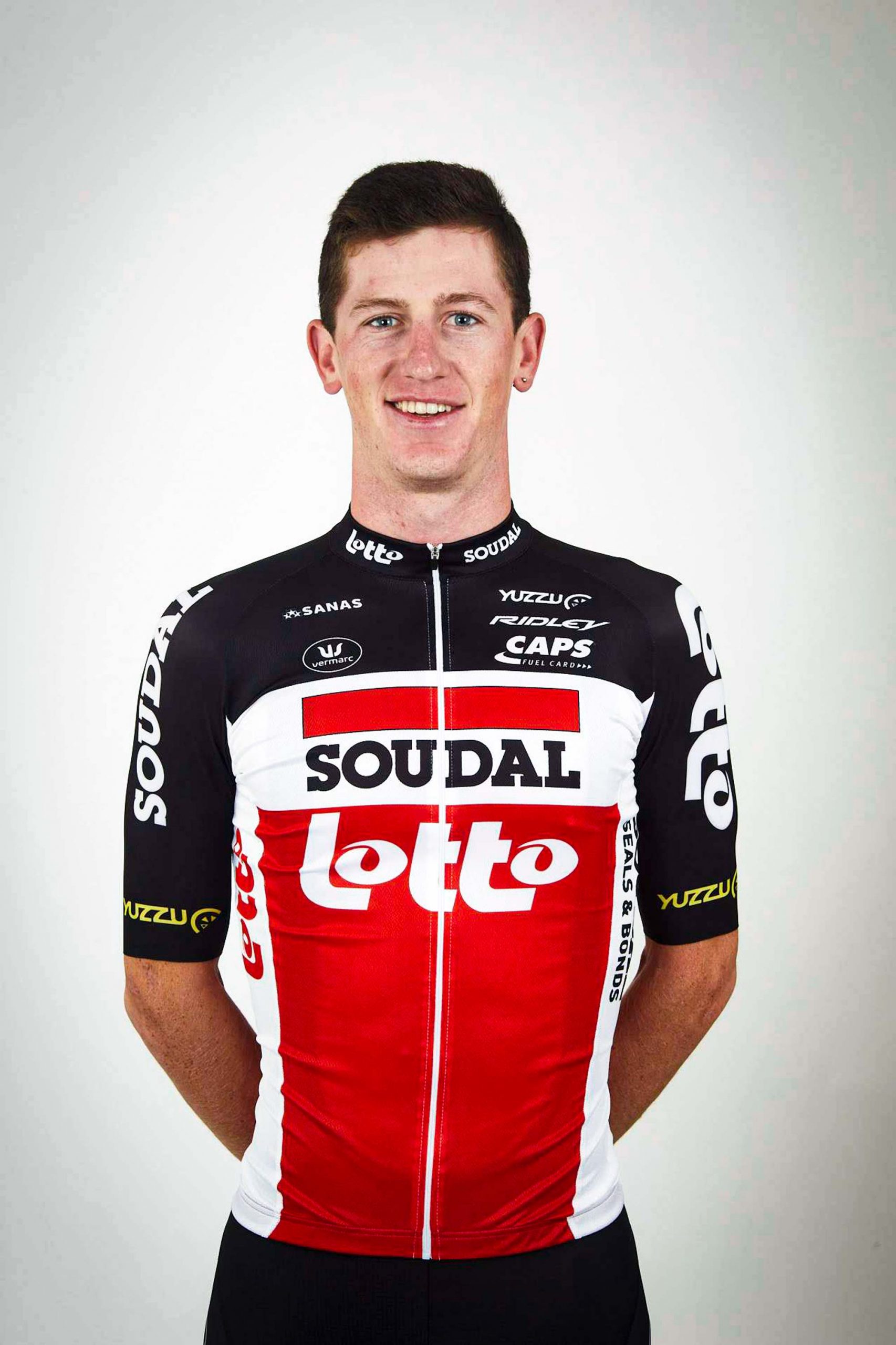 Harry Sweeny in Soudal-Lotto colours in 2020 when he was part of the development team. In 2021, he’ll be part of the Belgian squad’s WorldTour roster. (Note: depending on where they are competing, the team is known either as Soudal-Lotto or Lotto-Soudal.)

At 75kg and 186cm, Sweeny matches the build of a Classics specialist and that’s what he hopes will come of his cycling career when it shifts up a notch in a few months. When he makes his WorldTour debut next year, he knows that he’ll be working for others before getting any chance to race for himself, and that suits him just fine.

“It’s a big leap, for sure,” he says while being driven through northern France.

“I’m not really 100 percent sure what I can expect but I’d love to become part of the lead-out train with Caleb Ewan… but hopefully I’ll also eventually get to race for myself – and the Classics are something that I’d really love to go well in.” 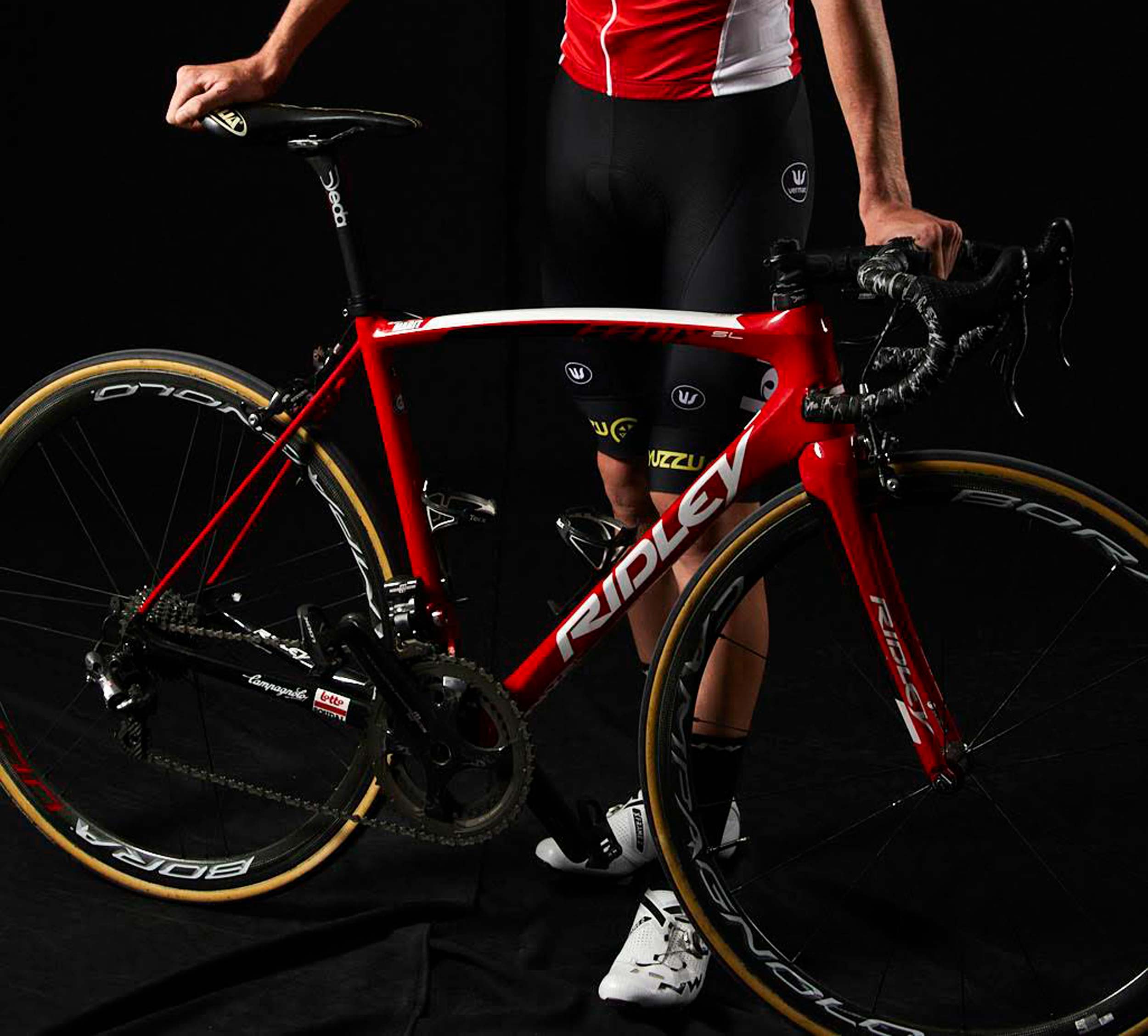 “In 2021 we’ll still be on Ridley bikes,” says Sweeny when asked about equipment. “They’re unreal bikes. Coming from Belgium, obviously, they meet the demands of pretty much any terrain… especially for the Classics.
“We’re on Campag groupsets still, which is great. They offer a lot of variability. We’ve got the disc or rim [brake] option, and we’re on 12-speed. Also, for the wheels, they’ve got a fantastic selection: climbing, deep section aero wheels… we’ve got pretty much anything you could ask for on the equipment front.
“The TT bikes are great – they’re flawless. And the HTC helmets as well are really incredible, they’ve been working well with Lotto and I think, depending on your position, they’re the fastest TT helmet you can get.”

In four short years, he’s gone from dabbling in triathlon to the WorldTour, via an Australian team, then an Irish team. He’s lived in Italy and Spain, and now expects to call Belgium home. It’s a rapid development, one with a few hiccups along the way but he clearly has the kind of talent that gets noticed.

“I’ve had a bit of a down week after the Baby Giro (29 August to 5 September),” he says, adding: “I got sick and I’ve just crashed recently.”

Still, he sounds upbeat and happy to be on his way to the race in France (17-20 September) and he’s naturally buoyant that the news of his two-year Lotto-Soudal contract has been made public.

He offers an outline of what led him to the WorldTour ranks, and although there are good results referenced, there have also been quite a few setbacks during his early years in cycling. 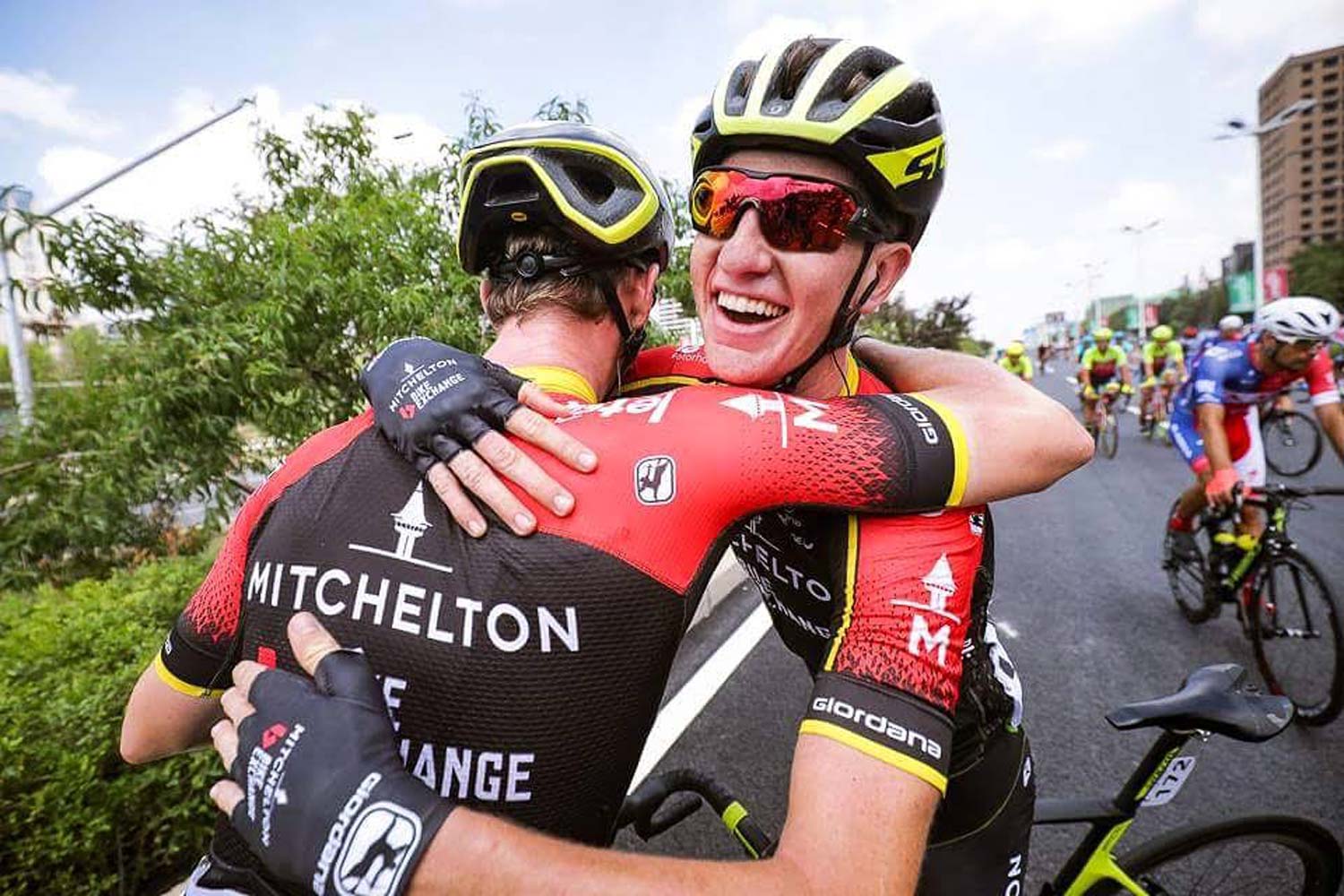 Sweeny was part of the Mitchelton-Scott development team for a couple years, living in Italy and gaining experience that would serve him well.

“My first year in cycling was as an under-19. I came from triathlon, then I had a few injuries and moved across to cycling in 2017.

“I had a few rocky years at Mitchelton-Scott, the development team in 2017 and 2018, which was quite difficult – ups and downs: hit by a car, knee surgery… you name it, I had it basically.

“Then, last year, I moved to EvoPro and since then onto Lotto-Soudal and I’ve had another up and down year with the coronavirus, but it’s all worked out quite well in the end.”

Discussions started with Lotto-Soudal in September last year when Sweeny was racing the world championships in Yorkshire. “I sat down and had a meeting with them and tried to plot out my progression for the next couple of years.”

It is a deal he, the team, and his manager, Gary McQuaid, brokered and we wait to see if his reputation as a lead-out specialist will earn him a start in the same races as Caleb Ewan.

“In my formative years at Mitchelton-Scott, I had a few patchy results. I was top-10 on GC in the Tour de Langkawi, and fourth in a stage. And last year I won the Queen Stage of Rhône-Alpes and the points jersey. Also, in Boucles de la Mayenne – a 2.1 – I was up there in the young rider classification as well.

“But mainly, it was the work I did with Wouter Wippert as his lead-out man last year that attracted attention. That sort of became a bit of a niche for me throughout the year.” 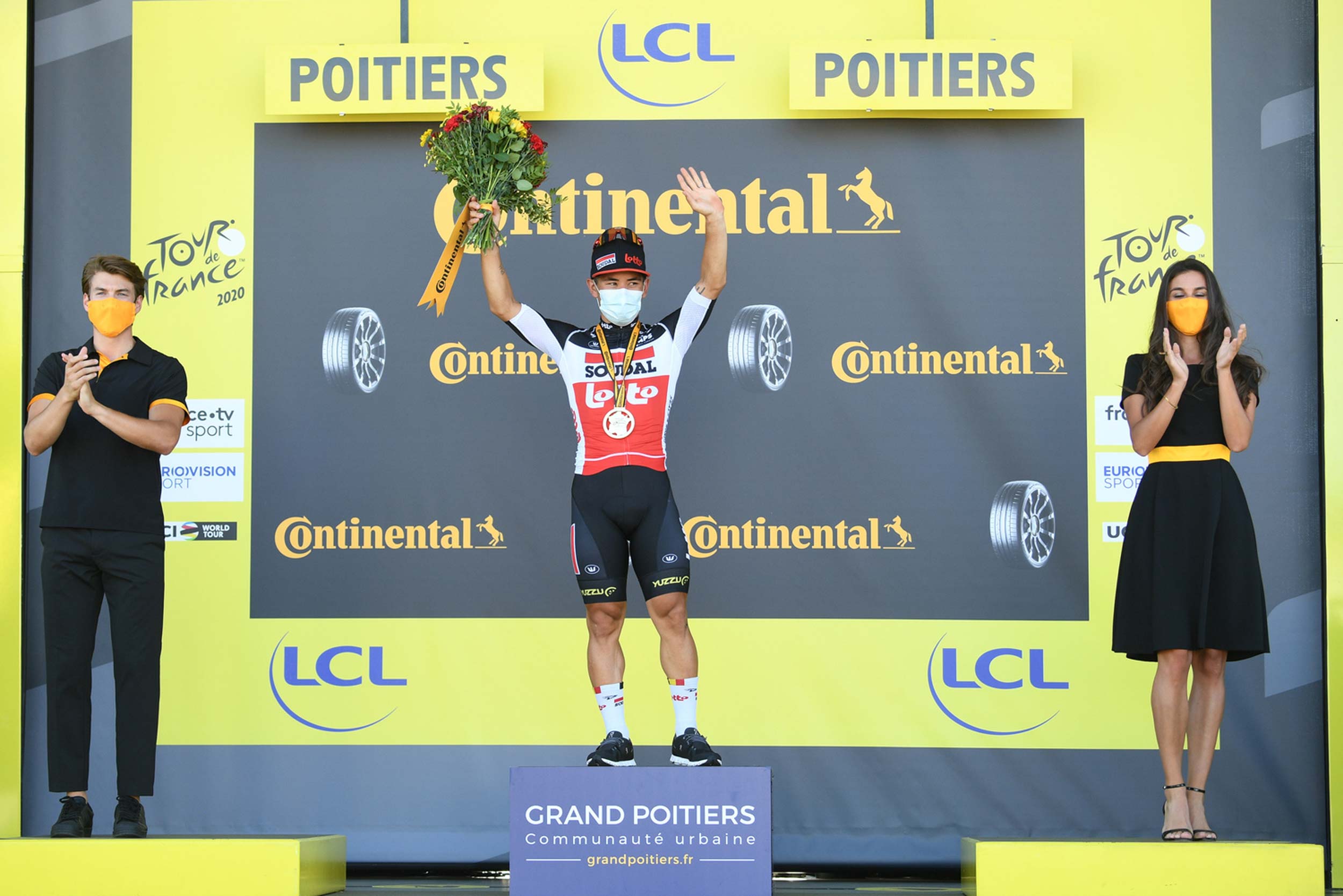 Ewan currently relies on the likes of Roger Kluge and Jasper De Buyst to set him up for the sprint, but Sweeny hopes that he can find his way into that lead-out train. He is, however, quick to point out that he’s good at the work that has to be done before the finish…

Does he have any aspirations to be a sprinter in his own right? “No,” Sweeny says promptly, “I’ve not got much of a sprint myself, it’s more the kilometres before; I’ll be second or third in the lead-out.”

It’s early days and he’ll be on a roster that includes a compatriot as leader of a team that’s had a rich history working with Australian riders. There’s a long line-up of Aussies who have enjoyed success on this team that’s been around for over 30 years, from Scott Sunderland in the 1990s, to Robbie McEwen in the early 2000s, to Cadel Evans for a couple of podium finishes in the Tour de France, to Adam Hansen and his record run of Grand Tours, and onwards to Caleb Ewan and his sprint conquests in recent years… Lotto-Soudal has nurtured Australian talent and the tradition is set to continue with Sweeny.