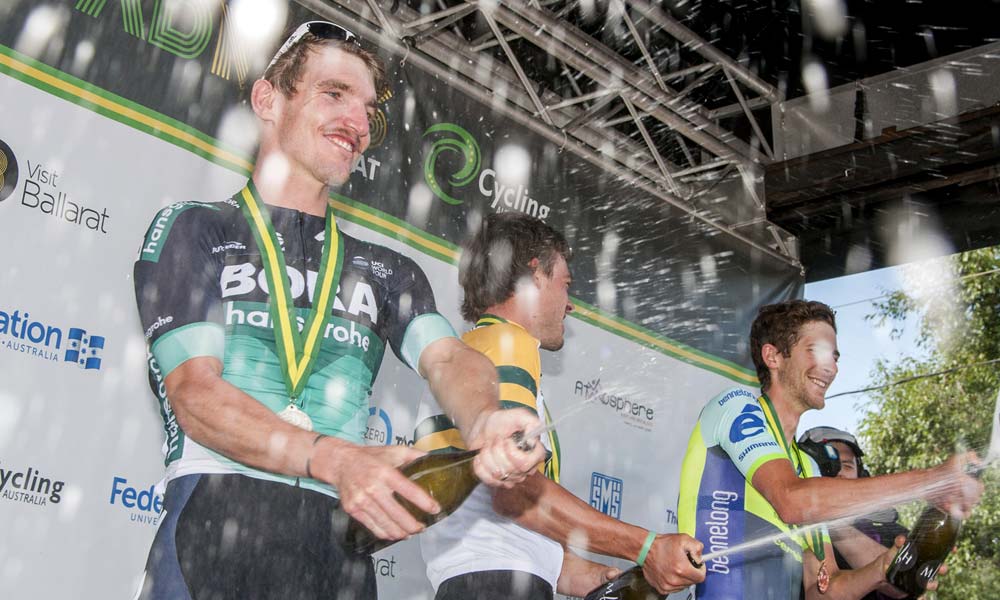 Jay McCarthy: ready for the Tour Down Under

There aren’t many riders in today’s peloton who can ask Peter Sagan to help him win a race. But next week the triple world champion is happy to ride in the service of Jay McCarthy. Third in the Santos Tour Down Under last year… first in 2018? Why not?

In his first race of 2018, the road race at the national championships, Jay McCarthy finished second. And history suggests that he’s a rider who can peak early in the season but still be there when his team needs him at the end of the year.

He was third in the Santos Tour Down Under in 2017 and fourth overall the year before.

Could 2018 be the year he has his breakthrough win and takes the title of Australia’s WorldTour stage race? He’s quietly confident but happy to see where the road leads him.

On the Thursday before the start of the 20th edition of the Santos Tour Down Under he had a big day with the Bora-Hansgrohe team, previewing a few critical elements of the route and was on the massage table at the end of a long ride. He picked up his phone when it rang and, in his usual calm demeanour, said: “Yep. Let’s have a chat.”

And with that I pushed ;record’.

You can read the transcript of our discussion below. 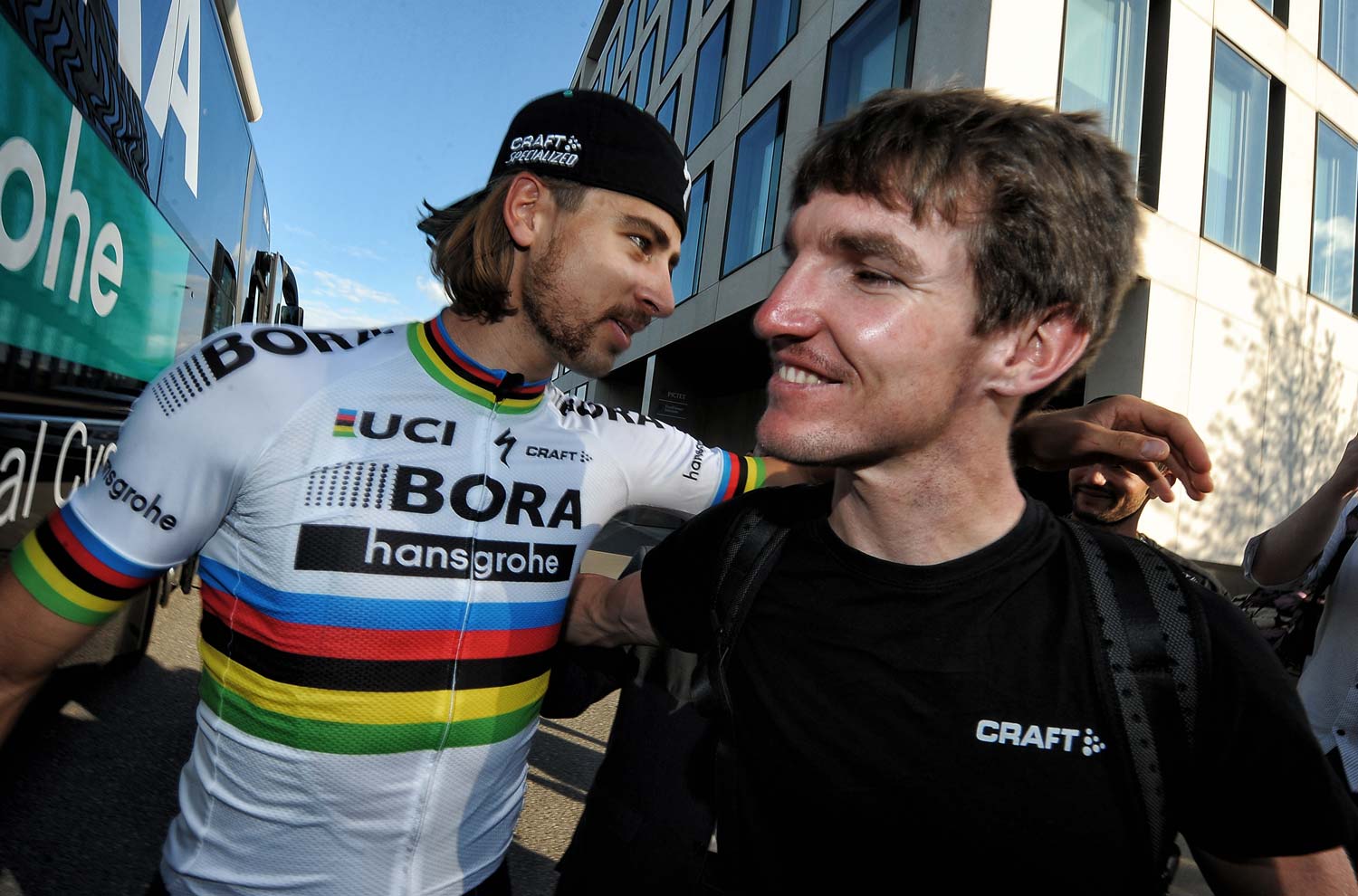 Peter Sagan and Jay McCarthy at the Tour de France in 2017.

RIDE: It’s the Thursday before the ‘Festival of Cycling’ kicks off in South Australia and I’m talking to Jay McCarthy. He’s on the massage table and I’m in an office in Sydney but he’s in Adelaide after finishing bit of long recon ride of a couple of stages of the first round of the WorldTour for 2018. How did you find today…?

Jay McCarthy: “Today was a nice, long day we had to get in the legs. It was a hot day though. I was out around Old Willunga Hill and the boys who have come from Europe are feeling the heat coming on the way home.

“It was a good day for a little bit of adaption to a bit of warm weather for them.

“I think the boys are looking well. A couple of them, just coming off the plane and getting here from the cold in Europe, had a little bit of sickness but everyone seems to be getting that out of their system and everything is looking pretty good for the start on Sunday.”

“Yeah, third last year and fourth the year before.”

So, you’re knocking on the door… you’re sort of always dancing on the periphery of the Big Breakthrough Win in Australia. Do you think that this is going to be the year?

“I definitely had that in the back of my mind while preparing for January. I’ll give it my best shot next week and, if not, there’s definitely a couple of stages that will suit me. If I’m in shape to be going well there in stage two, like I did a couple of years ago in Stirling – when I got my first professional win – then it could go well.

“Stage four this year, coming up Norton Summit, is a solid stage but if I can hold on there it could be a good final for me too.

“I’m knocking on the door there and I think the overall aspirations will be pretty strong too.

“So, I’m looking forward to next week and I’ll play my cards in those couple of stage and, of course, Old Willunga.” 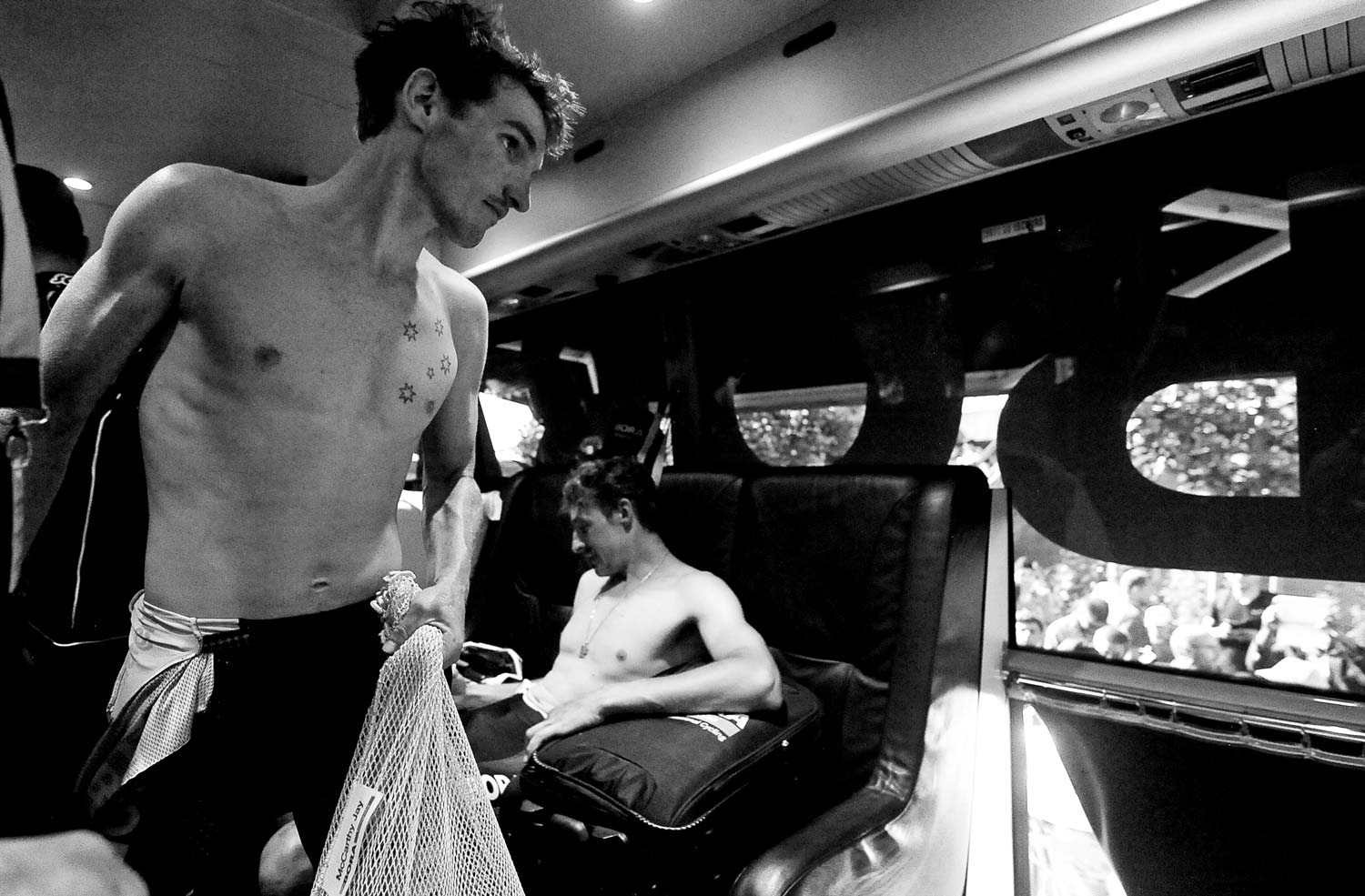 You’re one of the few guys who are going to have the superstar of this generation of cycling working for you. Has Peter Sagan explained that he’s going to lay himself on the line for you? Or do you anticipate him going for a few stage wins himself?

“We don’t really talk about it too much. There’s a bit of a performance plan and Peter will see how he’s going.

“We’ve also got Sam Bennett who has shown himself to be pretty quick this time of year.

“The Stirling stage that’s good for me, also suits Peter down to a tee. So, I think if he’s feeling pretty good, he’s definitely going to have a look for himself – but also, like last year, I think he doesn’t mind giving me a hand coming into some of the climbs that I’ll have to do well on and give it a crack if I’m going to achieve what I’d like.

“It’s pretty nice to have that feeling.

“I’ve raced with Peter for a few years now and it’s pretty cool to have that opportunity.”

When you say ‘Peter’, there’s two on your team for the Tour Down Under – Peter Kennaugh and the guy we’re talking about: Peter Sagan. He has a larger than life personality. What’s he like as a team-mate?

“We have a good relationship with everyone in the team. These few days in Adelaide have been nice. Everyone is hanging out again.

“I missed out on going to the team training camp. I was able to stay here in Australia to prepare for the summer of racing and I didn’t join the others in the off-season so it’s nice to be back in the team environment. Having Sagan here obviously adds big hype to the race and also for our team it’s pretty exciting even to have an opportunity to race with him.

“He’s a good leader and also a good team-mate. We always have a good time and a good laugh at the dinner table and even this week we’re checking a little bit of Adelaide out while we’re out riding or after training. It’s been fun.”

He is a bit like a magnet. He does tend to attract publicity. Is that good or bad for someone who is in your predicament and trying to win a bike race amidst all the hype?

“To be honest, I haven’t really noticed it too much.

“I think there’s a couple of events that I’ll have to do – being one of the Australians on the team – but at this stage we haven’t really had to do too much.

“It’s been pretty good. It’s been relaxed for the days that I’ve been here since the nationals. I don’t’ think it really changes much.”

It’s an impressive line-up that you’ve got for the Tour Down Under but I wonder if we can hark back to the nationals. It was, after all, only a few days ago… and you were on your own: the only Bora-Hansgrohe rider there. Second to a formidable Alex Edmondson… what did you make of that whole race and how it panned out?

“It was different. I went in this year thinking that I would not have much of an aggressive sort of style racing like I have in the past.

“Last year I went across to the break and then we were brought back anyway.

“Not having any team members meant making any moves early was going to affect my chances to go for a result. So, I kind of had to put my biscuits into hoping the dynamics in our group would bring everything back and I could have a good sprint. Or, if I had to, try and move in the last lap.

“Obviously, to be close to winning it is disappointing and it would be awesome to wear the nationals champion’s jersey but Alex had a great ride and hats off to him. He and Chris Harper worked really well together coming into the final.

“I can’t look back too much and I’m just happy with how everything went and it goes to show that I’m in pretty good shape for next week.”