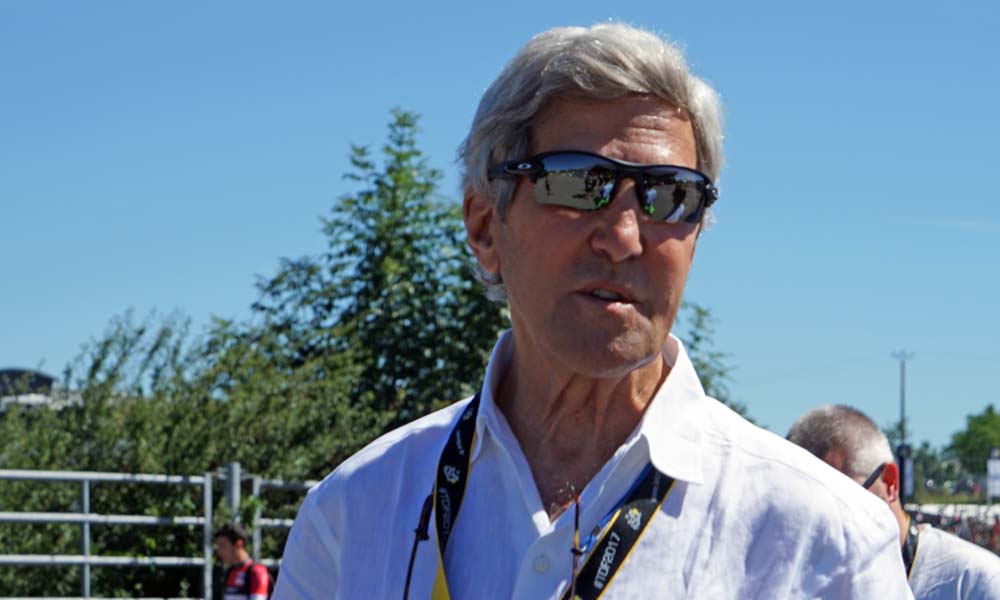 John Kerry: “I’m a cyclist and a fan”

The Tour de France is a showcase of cycling that appeals to spectators from around the world. For stage 15, Cannondale-Drapac had a special guest in the team car. We caught up with John Kerry to talk about cycling… and politics.

The US Secrectary of State of the Obama administration, John Kerry, says that at times of stress he turns to the bike to try and clear his mind. The 73-year-old has attended the Tour de France on a number of occasions but on third Sunday of the race in 2017, he spent the entire 15th stage in the Cannondale-Drapac team car “to see the strategy, the back-and-forth and get a sense of the race – it’ll be fun”.

The best American in the stage from Laissac to Le Puy en Velay was the original King of the Climbs of the 104th Tour, Nathan Brown in 59th and Kerry recognises that cycling in the US is going through a transitional time.

“The Americans are rebuilding a bit right now,” he told RIDE before the start.

The politician is a fan of cycling and he wasn’t being parochial with his commentary. Rather, he recognises the many benefits of bike riding and admits that he uses it to decompress at times of stress.

“I get on the bike to get away,” he said. “Exercise is one of the best mechanisms to deal with stress, so it’s really good for you but I also think on a bike a lot. You know, you can just clear your head and focus. It’s great.”

It’s not uncommon for celebrities to attend the Tour de France and John Kerry is not a stranger to the race. In 2005, on the eve of the final time trial of the Tour – one that began and ended in St-Etienne, not far from the finish of stage 15 this year – he made an appearance. Twelve years ago, he was still getting used to life off the campaign trail…

Around seven months after the 2004 US elections, which he lost, he turned up at an impromptu gathering of Tour staff who were enjoying a few drinks in the carpark of the Mecure Hotel in St-Etienne. Kerry sauntered down to see what was going on and was duly handed a plastic cup with champagne.

For a few hours he shared stories about his election loss, his views on cycling, and his appreciation of French culture. For a career politician it was a rare opportunity to unwind away from the spotlight and enjoy a moment without security guards and with the liberty of talking about a topic he loves: bike riding.

It was a relaxed atmosphere and he said he had fond memories of that gathering.

The next day, he followed Lance Armstrong in the final TT of the 2005 race, the final solo ‘victory’ that the Texan achieved during his career.

Much has changed since Kerry’s maiden trip to the Tour and when I referenced this during our discussion this morning, he acknowledged the point and said: “Well, it sure has.

“It’s very disappointing obviously for everybody – it’s just a tragedy, that’s all. I’m unable to describe it any other way, it’s just too bad.”

It was obvious that his comments related to Armstrong but I couldn’t help but interject and ask: are we talking about sport or politics?

“I’m talking about both,” he nodded.

“But the sport is doing great. And the Tour de France is one of the greatest sporting events in the world; [it’s] extremely well managed and recognisable all over the world.

“It’s an unbelievable display of the countryside of France and of a really terrific athletic competition. People have no idea how complicated and difficult it is to have a whole team riding 110, 120, 130 miles in a day… and then get up and do it all over again the next day.

“That’s tough, so I admire the endurance and capacity for suffering that a lot of cyclists go through.”

And, I prompted, it’s similar for politicians…

“Yeah,” said Kerry about political life, “I wish it were a little more admirable these days.”

He was at the Tour to enjoy one of his favourite sports, not talk politics. So what does he enjoy most about the activity that gives him his exercise?

“It’s great for clearing your brain and thinking.

“It’s a great sport: you see the world, you see things around you, it’s environmentally friendly, and I think that it’s a great form of exercise.”