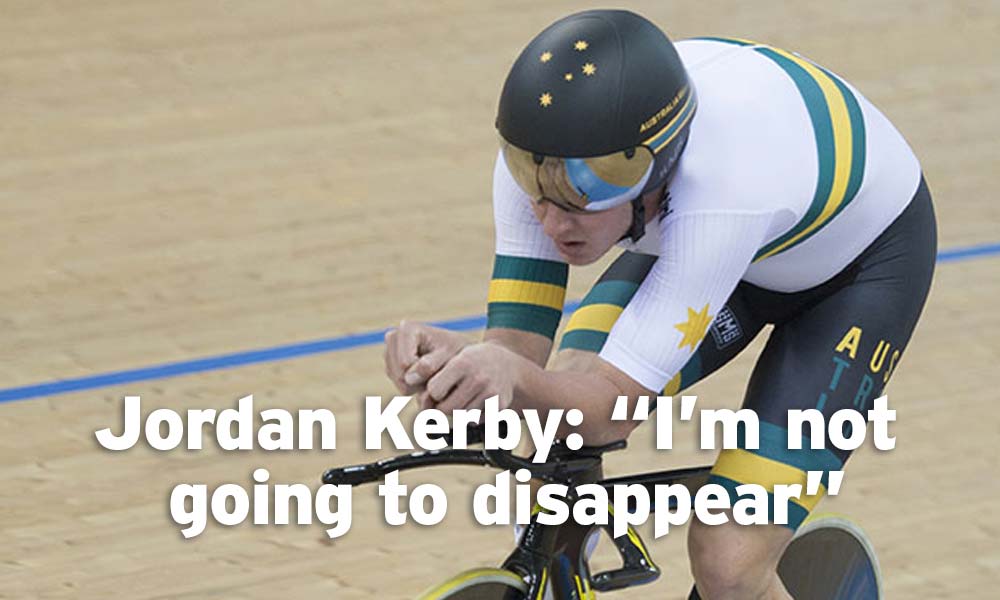 On Monday 4 June 2018 four riders were notified that they would no longer be part of the Australian Cycling Team. One of them is Jordan Kerby. He offers his take on the news shortly after surgery to remove four wisdom teeth…

Receiving the call from the coach

“On Monday I received a call from Cycling Australia saying my scholarship wouldn’t be renewed and the predominant reason for that being that they don’t think I can improve to the level required for Tokyo 2020. Now, they have their opinion and that’s fine; I disagree with it – and that’s also fine.

“Where I’m coming from is that I feel it’s not the right decision; I feel that it was very abrupt and very last-minute – I had no idea it was coming.

“I disagree with the fact they think I can’t improve because I was with the program for nine months and within nine months I went from having never ridden under four minutes (for the team pursuit) to riding 3:52, twice, and being a gold medallist in the team pursuit at the Commonwealth Games.

“That’s the main point in which I disagree with Cycling Australia.”

“In the scenario surrounding the championships where I won my rainbow jersey, in Hong Kong in April 2017, that was probably the thing that I can say I’m most grateful for. I was actually given an opportunity and they could have easily selected someone else to ride the individual pursuit at the worlds.

“I’m grateful for being able to show what I’m capable of and also for the experience that I had in Hong Kong.

“When I consider the fact that I wasn’t able to defend the title, I’m not too bitter. If I’d been given the chance, it may not have changed a thing because even if I raced the 2018 world championships and won an individual pursuit, I perhaps would have still been in the position I’m in today. However, now that I’m in this position, I recognise that it would have been nice to chase a rainbow jersey one more time – and that’s obviously never going to happen again now.”

“One thing is for certain: I don’t want to stop racing. The way in which I will move forward is still completely unknown. My passion is the track. So, at the moment, I’ll be based in Brisbane for the rest of the year, trying to rack my brain as to what it is that I should do.

“I still want to race internationally on the track and there are ways of doing that, like with Continental teams and that kind of thing.

“I’ve been knocked down a lot of times but this one is probably the hardest one I’ve had to deal with.

“I’ve come back before and I’m saying to you now: I’m going to come back again.

“I’m not going anywhere. I really want this – my heart is still in it. And I still want to prove myself. Every morning I wake up and I want to work hard, I want to train, I want to race at the top level in track cycling.

“I’m in a very tricky situation but hopefully something can come of it. But I want the world to know that I didn’t decide to leave the program, I was taken out of it. I don’t agree with it and I want to keep going.” 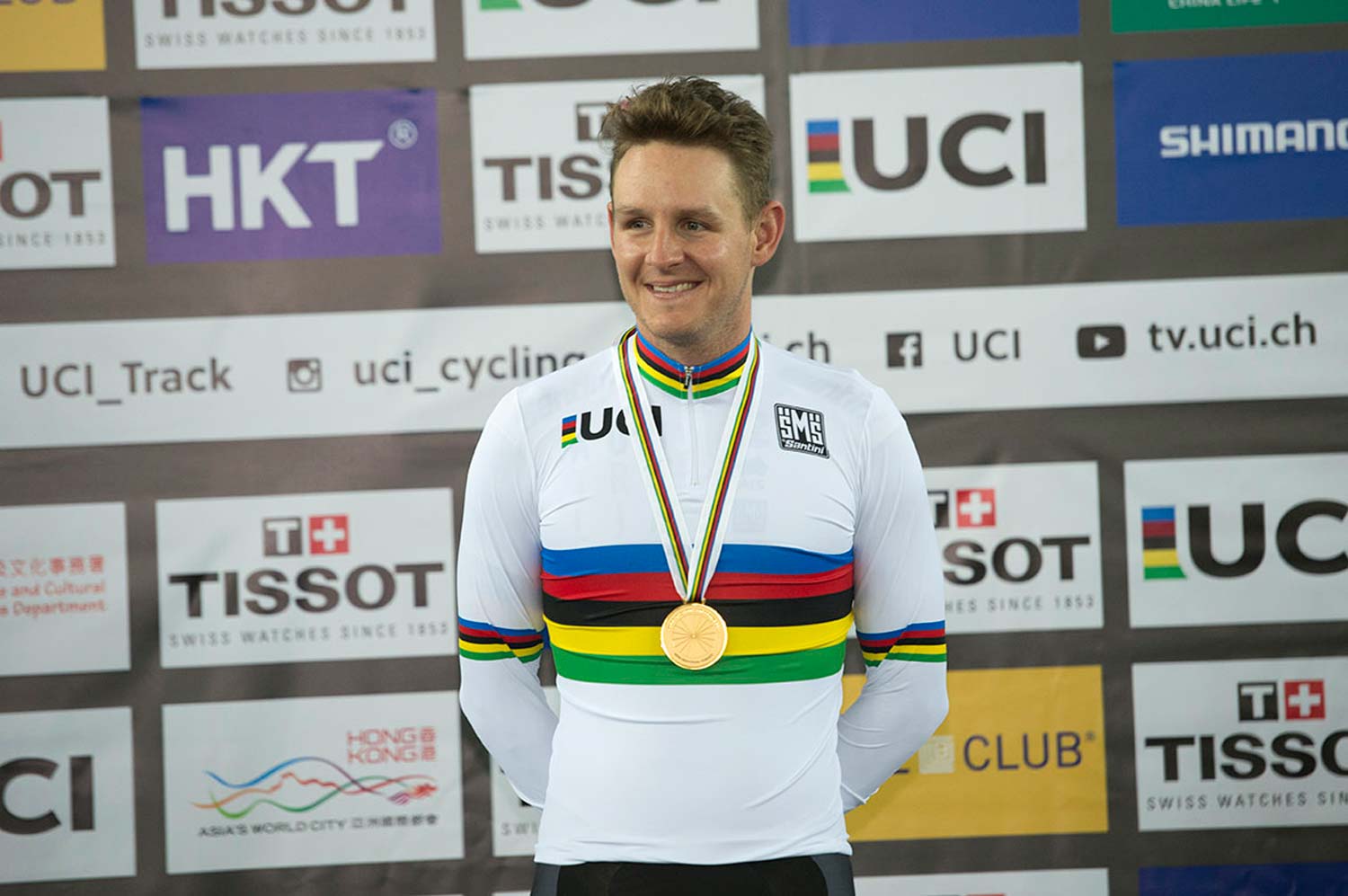 How the news was delivered…

“I received the phone call on Monday morning from Tim Decker. And I like to think that my relationship with Tim is pretty good. He said the program was being restricted, in relation to the number of riders allowed, and that there wasn’t room for me because they don’t think I’ll get to that level by the time Tokyo comes around.

“I had that conversation with him. Okay, that’s fine. I understand that there’s nothing I can do to change that now: what’s done is done.

“Since then, I’ve spoken with Simon Jones. And I’ve had good chats with him and one thing he’s emphasised is that there is a support network there. I have also been in touch with Mark Gregory who is Cycling Australia’s ‘personal excellence manager’ – I’m not sure what his specific role is – but he is there to help push athletes in the direction of transitioning if you need to find a job, if you want to go and study… all that kind of thing.

“I have been contacted about that, however, I’m pretty self sufficient up here in Brisbane and I have my own personal network of people who I think are probably much more valuable to me in that area.

“The short answer is: yes, they have made an effort. However, the way in which I was told was very abrupt and, to me, it came from nowhere. They obviously had a lot of meetings about it and discussed it over time but to me it was a surprise.

“I thought, ‘I’m a Commonwealth Games gold medallist in the team pursuit, having ridden 3:52 a couple of times…’ and there’s only a handful of men on the planet who have ever done that. In any other country I dare say I’d still be in the program.”

“I think I had a good season overall. It started when I went down to Adelaide in August – so I was only there for nine months. The Oceania: won the team pursuit, won the individual pursuit, silver in the scratch race.

“I was second in the Melbourne Six-Day, second in the national Madison championships, third in the Australian omnium championships. At the Melbourne Six-Day we rode a 3:55 team pursuit. In the national individual pursuit, I was second… so I still got a medal. Bendigo Madison: I was third. In the Commonwealth Games, I was part of the winning team in the team pursuit, which is the main performance goal which was set for the season…

“I’m the first to admit: some of my rides were not exceptional, however, I do believe I haven’t been given enough of a chance.”

“I just wanted to get my story out because there are a lot of people who are going to have questions about why this has happened to me. At the end of the line, I just want to tell everyone that I’m not going away. I want to keep going in this sport and I’m not just going to disappear.

“There are a lot of people who put a lot of time and effort into me and I’m not willing to waste that.”

– As told to Rob Arnold