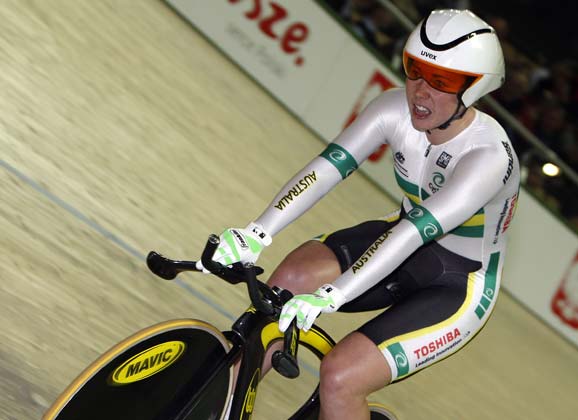 At the age of 27, Kaarle McCulloch is a veteran. She’s been winning national championships on the velodrome since she was a junior in 2006 and world titles since 2009. She’s a track specialist, a sprinter. She rides the 500m TT, the keirin, the sprint and the team sprint. And her list of results in world-class races is impressive. For three years in succession she pulled on a rainbow jersey at the track titles: 2009, 2010 and 2011 – first, first and first again. And always as the first rider of a two-up combination. On her wheel is the Queen of Australian cycling, Anna Meares. The pair have become synonymous with success but rarely is McCulloch referenced first.

McCulloch is a genuine star in her own right and she’s now racing out of the shadows of her more senior compatriot.

At the Oceania championships in Invercargill, New Zealand last week she was up to her usual antics: winning fast races… one after the other. Gold in the sprint, TT and team sprint has put her on course for the end goal of the current campaign. She wants to go to Rio to race next September.

We caught up with three days after her return from NZ to find out if she’s confident of achieving her current objective. 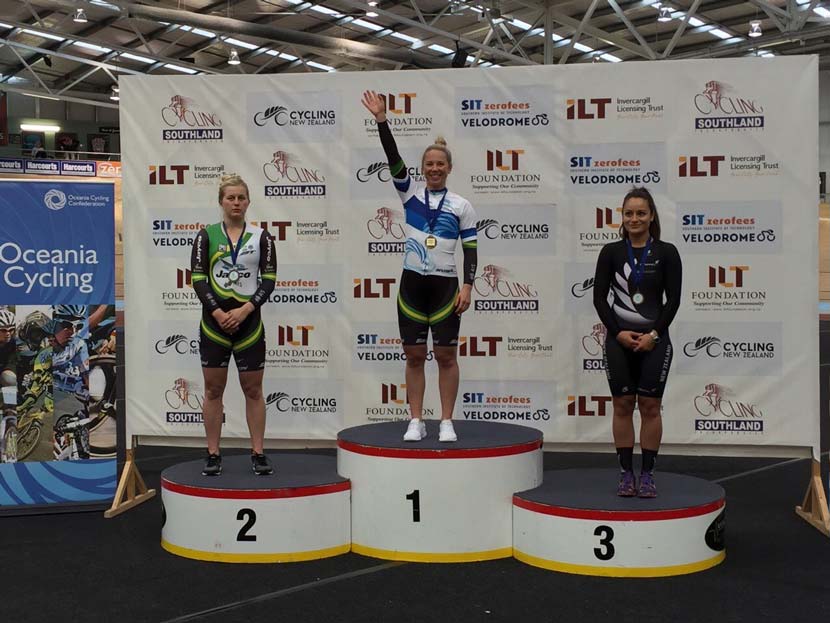 RIDE: I’m on the phone with Kaarle McCulloch who is a big name in Australian cycling even if we don’t hear it all that often. She’s just come back from Invercargill in New Zealand where she won three gold medals at the Oceania track championships. She won the sprint ahead of Steph Morton. She won the 500m time trial in 34.3. And she won the team sprint with Anna Meares on her wheel.

How was the experience over there? What was the track like? Did it feel fast? Were you disappointed not to go under 34, for example? What are the stories?

Kaarle McCulloch: “I was certainly was a bit disappointed not to go under 34 – that’s been a career goal for me but I’m pretty confident that I’ll get it next time I get to race it.

“I actually really enjoy racing on the [Invercargill] track, it seems to have fared me well over the years. Even though it was very cold outside, it was certainly reasonable conditions inside and not blowing a gale – which is obviously handy for a track sprinter.”

Traditionally we would assume that it’s a little bit cooler in New Zealand at that time of year. Was it difficult to post fast times?

“The conditions inside the track were not too bad. In the morning sessions it was around 20 degrees, which is okay considering back here in Sydney we’d been training in around 16-17 degrees for the last few months. It was actually quite a luxury for me.

“In the evening sessions when there were a few more people at the track and a few more bodies in the stands, it warmed up to around 24 which is pretty stable conditions. It was nice inside the track for us.”

Is that where the World Cup is going to be next month?

“No. Actually, the World Cup is going to be in Cambridge which is on the north island. There’s a brand new track that they’ve recently built and, from what I’ve been told, it’s heated every day – which is certainly nice for the New Zealand team. It’s supposed to be really fast so I’m really looking forward to testing that track out.”

And the vibe of New Zealand cycling… you said that when the people were in for the evening session it was good. So, was it a good crowd?

“Yeah, the New Zealand people really seem to love track cycling and, from what I can tell, Invercargill – which is right down the bottom of the south island – only has a small population, so there was a reasonable crowd in there every day. It was certainly really nice to race in front of.

“It’s always a good little rivalry between Australia and New Zealand so it was good to be on their home turf and get a few wins over them.” 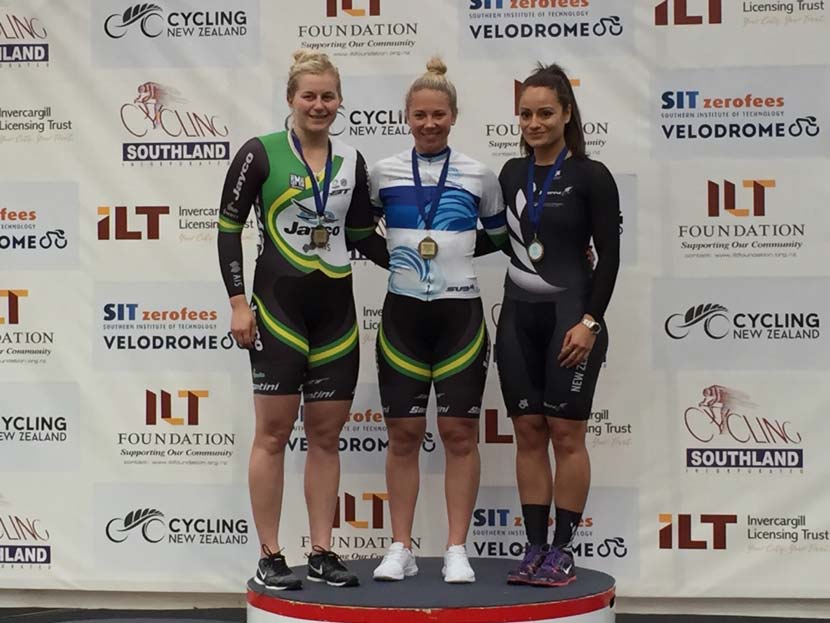 Can we talk about your favourite event? If you got three gold medals, which one was the most enjoyable to win?

“The sprint [on the final night], for me, was definitely the icing on the cake because I’d done very little preparation for that event.

“I’d been targeting the first-wheel position in the team sprint – which I had an average performance in, even though we won. But it certainly gave me the confidence for the sprint, to be able to go out there and just do my best and see what happens.

“In the end, I actually raced really very well. I exceeded my expectations – it was beyond what I thought I was capable of at this time of the year.

“It has given me a lot of confidence as we head forward.

This sounds like a stupid question, but in Rio… is it still just two laps for the team sprint?

“Yes, that’s right. There is a little bit of talk that, possibly, it may go to three riders post-Rio but for the time being it’s still only two riders for the women.

“It think that, when the team sprint first made its debut around 2002, it actually was three riders for the women but because there was no much depth back then they had to reduce it back to two.

“Now, as we see track sprinting – particularly on the women’s side of things – getting far more popular, they are looking to make it three riders for the women.

“This is obviously super exciting because it gives another young rider an opportunity.”

There are a couple of people who have got big reputations for doing what is effectively a 250 metre standing start time trials. You’re one of them. Robert Forstermann is another, for example… he’s probably the starter who gets the most attention but you’d be on par. You had three world titles in a row… do you sometimes wish that you were going second wheel?

“I actually feel that if I was to go back into the second wheel position right now – when I’m going faster than I ever have – I think that I’d do a better job than what I was doing around the time of the London Olympics.

“I know, for example, that if I don’t produce the time that is required by Cycling Australia to earn me the starters spot that I am more than capable of slipping into second wheel. And I’m more than confident that I’ll be a very, very good second wheel rider.

“I sometimes miss it but at other times I’m like, ‘I only have to do one lap now…’ so that’s kind of a nice thing.”

We’re getting used to the McCulloch/Meares combo. Can we assume that that’s going to be the pairing for Rio? Or should nothing be assumed in an Olympic year?

“In an Olympic year nothing can be assumed. Also, just based on the fact that Anna, Stephanie Morton and myself all really want to be there. And we are all really working very hard.

“Steph has improved her start a lot.

“We know Anna is capable of doing the same sort of times that I rode in Paris at the worlds for the first lap earlier this year.

“And I know I can do a good second wheel.

“At the moment, it’s really just up in the air and with me coming out and winning the sprint at the Oceania championships – it just throws another spanner in the works because now I’ve put my hand up for that position.

“It’s very tightly contested but I’m more than confident in my ability.

“My motto at the moment is, ‘I’m going to give the selectors every reason to select me!’ That’s what I’m doing and I think last week was the first step in that journey.” 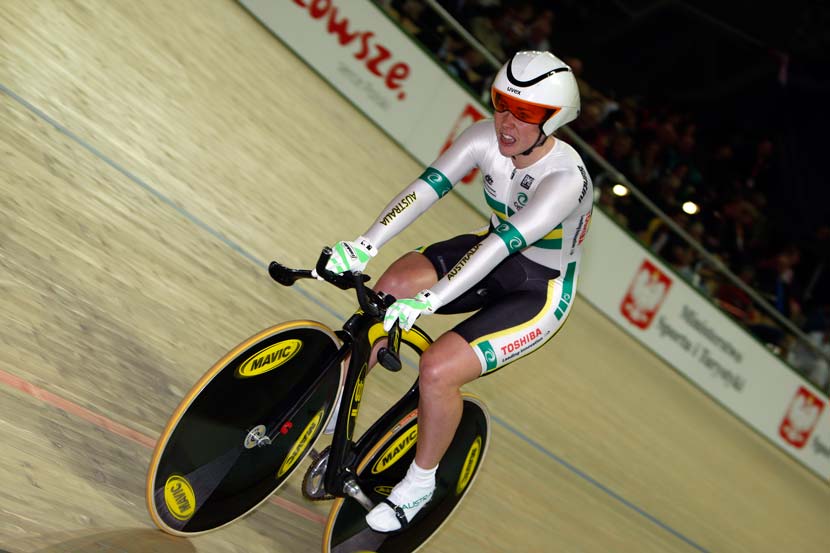 McCulloch contested the 500m TT at the worlds in 2009.
Photo: Yuzuru Sunada

I got off the phone from Brad McGee two days after he returned from New Zealand. He told me that the stand-out of the championships was watching your performances. That would stand you in good stead…

“Definitely. I’m really fortunate in New South Wales, which is where I’m based – I’m not in Adelaide with the Cycling Australia program – where I’ve got a really good support base. There’s Brad McGee as well as Sean Eadie and all my team at the NSW Institute of Sport and my win on Sunday night made me really proud for all of them because I know how hard they’ve been working with me.

“Seeing Sean with his hands raised in the air and hearing Brad cheering for me… it just gave me that extra boost. I was like, ‘I can do this. And I can go to Rio. And I can be more than competitive!’”

With Victoria Pendleton no longer racing, the sprint opens up a fair bit. If you’re looking at the international cast and let’s say that you do end up representing Australia in the sprint, who are the rivals that you’re looking out for?

“In Paris this year, Zong qualified in 10.6 which is pretty phenomenal for a woman at sea-level.

“And then we’ve got Kristina who actually qualified reasonably low down at the worlds but she is a superior tactician and I think she’s one of those riders that people hate to race because you don’t know really what to expect with her.

There’s no World Cup in Australia again this season…

“The second World Cup is in New Zealand, at Cambridge as I mentioned. That’s about as close to home as we’re going to get this year.”

Does that make a difference for some like you? Before the 2004 and 2012 Olympics we had a ‘home’ world championship prior to the Games. You’ve done one of those. Did that assist, having the Melbourne worlds before the London Olympics?

“That was out of this world and something that I’ll always remember as a highlight in my career.

“Racing in front of a home crowd – especially a packed home crowd in Melbourne at the Hisense Arena… there’s just nothing that beats that.

“I would have loved to have raced in front of a home crowd before Rio but unfortunately we have to go to London for the world championships next year.

“Hopefully it goes a bit better than my first senior world championships which was in Manchester in 2008, where the British pretty much cleaned up and then went on to Beijing to clean up there. I’d like it to be a little different this time and for us Aussies can take a few more titles back from the Brits.” 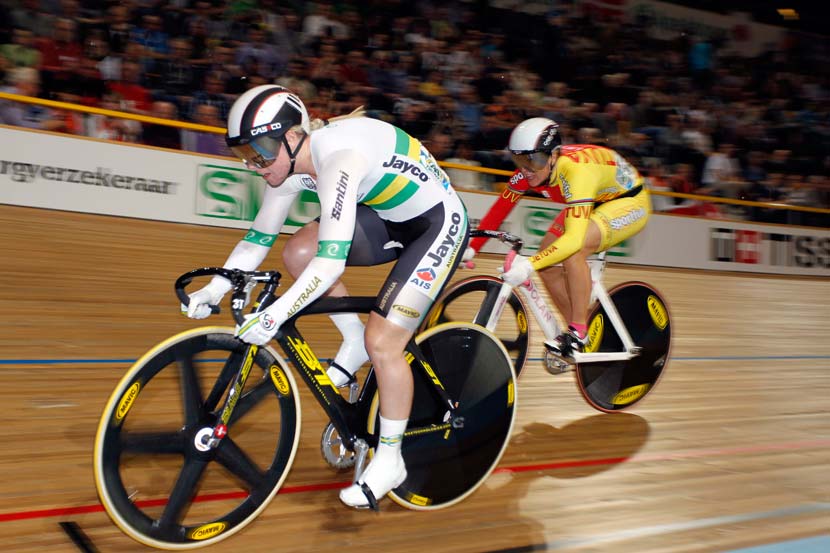 McCulloch leads Simona Krupeckaite in the early rounds of the sprint at the 2011 worlds.
Photo: Yuzuru Sunada