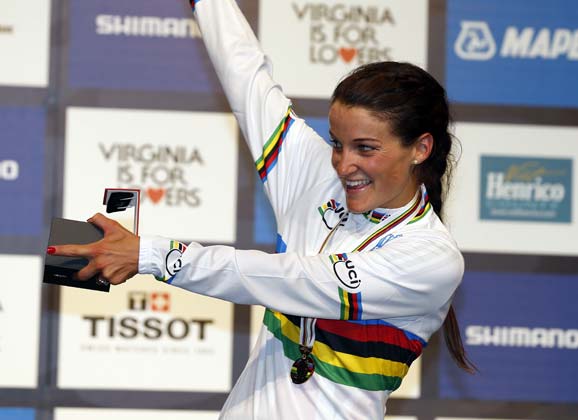 Lizzie Armitstead: all set for an exciting season

The world champion is back in training. Lizzie Armitstead’s 2016 season began on Monday. She’s back on the bike and beginning the process of preparing for the season that features the UCI’s inaugural edition of a women’s WorldTour. RIDE spoke with the two-time World Cup winner a month after her impressive victory in the worlds in Richmond and she explained how that was a race that “all went to plan really”. 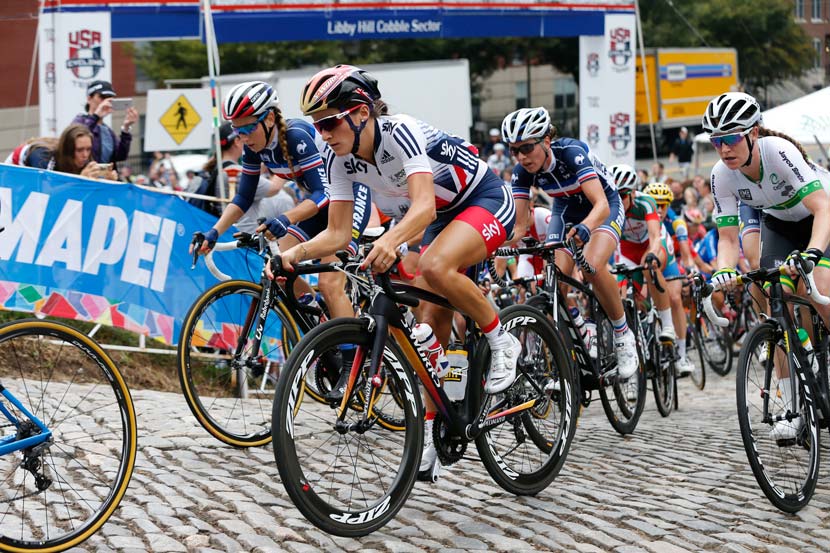 Lizzie Armitstead: “It all went to plan really.”

If you’d like to see grace under pressure in a bike race, go to the final kilometres of the women’s road race at the 2015 world championships. Find the rider in the Team GB kit with the Specialized Evade helmet that’s features the Boels-Dolmans team colours, yellow-to-red-to-purple, and the Union Jack on the side. This is Lizzie. She knows how to race!

Just inside the final kilometre, Lizzie Armitstead makes her initial move. It’s a strong surge but it lasts long enough for her to repeat the successful tactics of a World Cup race in Plouay, France, earlier in the year.

Elisa Longo Borghini takes a glance to her right to see what Lizzie has done, but moves left opting for security of following the select few wheels ahead of her. But that doesn’t last long. The Wheel to follow is racing ahead…

Lizzie is committed. On the right hand side of the road she speeds with her trademark stance, low bent elbows, knees tucking inward, head bobbing sideways with each pedal stroke and her plaited hair hanging over a shoulder.

By now they are all strung out behind her. The cluster that had existed is now a long line and Lizzie is up front. Katarzyna Niewiadoma is the first to close in on the Brit’s wheel. The local favourite, Megan Guarnier – who moments earlier elicited the chant of “USA! USA! USA!” as the peloton raced over Libby Hill – is next in line. Then it’s Longo Borghini, Anna van der Breggen, Emma Johansson, last year’s winner Pauline Ferrand Prevot and the MTB World Cup winner Jolanda Neff.

It’s the roll call of elite cycling all in one place at the one time. But Lizzie is still there, at the front. Eventually she settles back into the saddle and takes a look over her left shoulder. Yep, all going to plan.

The chain is still on the inner ring. She dips her head and takes a look behind, under a shoulder. Around the late left turn, Lizzie finally concedes the lead position. Niewiadoma takes over, but not for long.

Lizzie is back at the front. The time to win has come. She knows she can but, in the long tradition of cycling, she’s in the wrong place at the right time. In the wind, on the front, yet to shift into top gear. She’ll tend to that in the closing 400 metres.

The left hand fingers gesture for the lever to lift the chain. It doesn’t happen. She tries again and gets the big ring.

Deep breath. Hug the left side of the road. Keep an eye on the others. Hold your composure. Take a look, keep the speed high and hold some in reserve.

There are nine in the lead group, the second peloton is just behind.

Lizzie rises from the saddle. One pedal stroke… two, three, sit back down. Let van der Breggen take the wind – ‘Lead it out meisje, I’m ready!’

Lizzie momentarily jumps on the wheel, shifts to the right and the drag race is on: with 50 metres to go they’re even… 40, 30, 20 – head to head, it’s too difficult to pick. Then, 10 metres from the line, the Brit takes the lead.

Then, 10 metres after the line: the realisation. ‘I’m world champion!’

Gobsmacked but delighted, goosebumps appear. ‘It happened. Did it happen?’ Two thoughts at once. Yes. Yes it did.

Grace, indeed! She didn’t make it look easy but it was effective. And it makes for great suspense. How does one woman begin a sprint over a kilometre from the line – after having already ridden 129km – and still beat the best in the world?

Lizzie explains that it was all part of a plan.

“I knew that I had to attack on Governor Street, the last climb,” she told RIDE over the phone while waiting for a plane in France at the end of October.

“I knew that that attack wouldn’t work because it was still 700 metres from the top with a full headwind to the finish. It would be special to do that solo so I knew, realistically, that an attack wouldn’t be sustained until the finish.”

By the time of the retelling a month has passed since the win but her recall of it is impressive, like she’s seen the video replay many times – although, she later admits, she’s not really had a chance to watch it.

“I sort of did a semi-attack on Governor Street and whittled the peloton down a little bit. Then, on the finishing straight, no one would come by me. I knew that would happen as well, I was kind of prepared for that.

“I’d won a race earlier in the year by leading the sprint out so I just deliberately went to one side of the road – to the left hand side – and at least then, if anyone was going to attack, I’d see it coming and be one of the first to respond.

No pressure. It was just the world championship that Lizzie, it seems, was always going to win.

“It all went to plan really.” 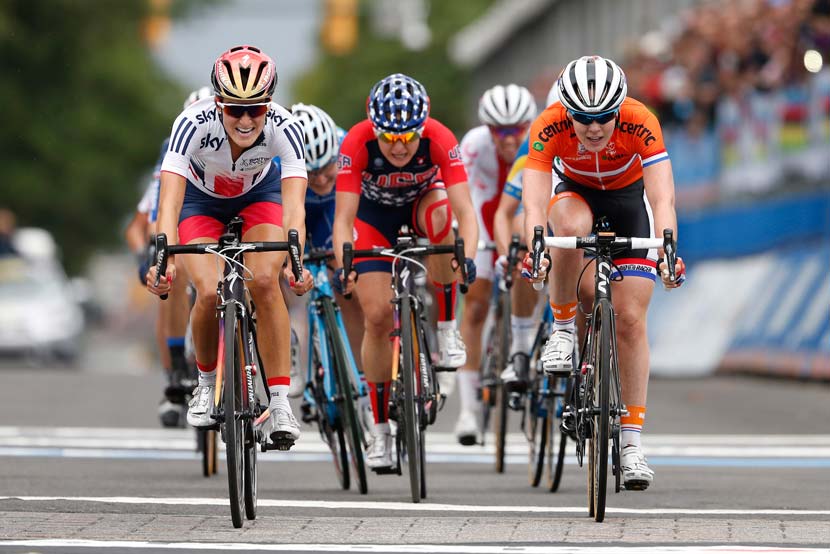 For the women’s peloton it takes a while for the champion to get her chance to be recognised as that. The off-season effectively begins after the podium protocol. There have been plenty of functions and every reason for her to feel like the world champion but competing in the rainbow jersey is some time off.

It’s not likely to be until she arrives in Qatar in February that Lizzie can put her prized colours on display in a race.

“It’s a weird feeling, being world champion,” she said of the award ceremony. There’s a great race, wide acknowledgement… “and then everyone leaves and it’s the end of the season and you don’t get to wear your stripes at all.

“It’s not an anti-climax but it’s a strange sort of feeling, so I’m looking forward to being able to race in the rainbow jersey on my nice Specialized bike and all that kind of stuff. Then it’ll hit home a bit more.”

Imagine that, grace and professionalism from a pro cyclist. She even considers her sponsors and references a brand that supports her. It should seem logical but how often do we hear about bikes unless there’s a complaint about a mechanical?

Lizzie is the one who first referenced Specialized, so it prompted further query about her product selection. She is one of few professional riders to appear in races on the new ViAS Venge frame. It happened on the Champs-Elysées in La Course in July. That wasn’t such a great race for her. (Instead it was van den Breggen who got the win.) But at the worlds it wasn’t that bike. Were you on a Tarmac? I asked.

On a complicated course in Richmond which included steep cobbled Armitstead opted for her usual road bike. Aero, in this instance, wasn’t everything.

“I was really quite surprised at how fast it was,” is her appraisal of the ViAS experience. “I just had the feeling that it pedals itself – it was just incredibly fast. The only reason I didn’t continue to ride it was because I couldn’t quite get the front end to fit me properly.

“I didn’t have enough time, I felt, before the world championships to set up the position properly and get used to it.

“In Richmond, I didn’t really need it but I think for something like the Qatar world championships [in 2016] it’ll be the perfect bike.” 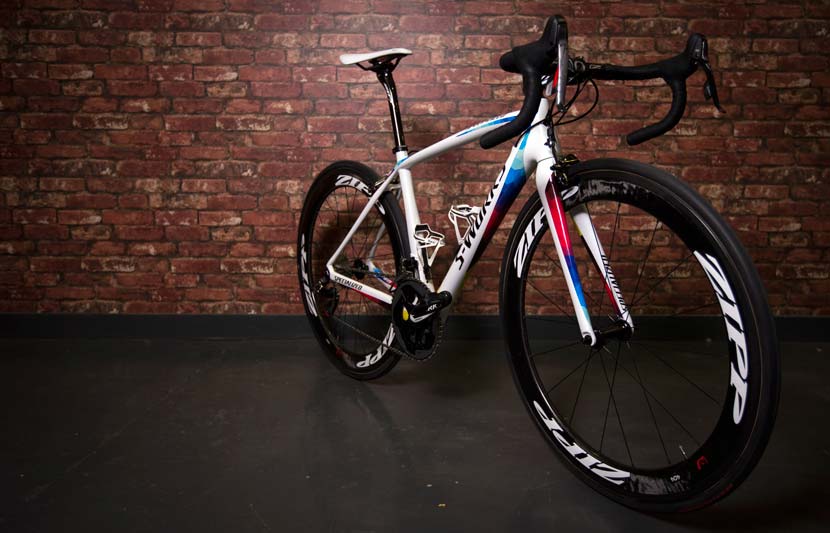 There’s no stopping her. The heir apparent of women’s cycling has taken over the throne. She’s been winning world championship medals since her silver in the scratch race (behind Skye-Lee Armstrong) as a junior 10 years ago. There’s been victories, plenty of them, along the way but the silver medal in the road race at the London Olympics is arguably the result she’s best remembered for.

“It’s definitely a good time to be a British cyclist,” she says, shaking off the common sentiment of complaint about how there’s no coverage for women’s racing, instead she acknowledges the glut of interest that exists for cycling in her country. “We’ve been lucky with the London Olympics, where I won the first medal, so that gave me a bit of a profile in the UK.

“It’s difficult to be kind of objective about the media interest in women’s cycling because, as a British athlete, it’s pretty good.

“We get a lot of exposure and interest from the media; in the UK it’s a massive sport and it’s growing all the time. It’s a good time to be involved in cycling.”

It’s even better when you’re the world champion, the winner of a race that had a thrilling finale, one that went exactly according to plan. It seemed to be a surprise that it all worked out but there’s nothing surprising about a talented rider living up to her lofty expectations.

The off-season ended for Lizzie Armitstead on Monday. She’s back on the bike and preparing for another season, an Olympic year. There’s a few months of training ahead before she jets off (as the reluctant flyer that she admits to being) to Qatar to defend her title.

“There’ll be a bit of pressure going into it but I don’t think I’ll have the same kind of condition that I had in 2015. There’ll be a different preparation going into the season next year.”

There’s now a WorldTour for Armitstead and her peers to consider. The inaugural edition of that series will begin with the Strade Bianche in Italy next March. There are 17 races in nine countries (13 one day races, four stage races), including the Prudential Ride London GP, essentially on the circuit that Armitstead earned on Olympic silver.

Lizzie is a two-time World Cup winner, she’s the world champion and we’re sure to see her thrive in what is a promising year for the sport. She turns 27 next month and the ride to her first race in the rainbow jersey has just begun. We look to watching what happens next in an exciting professional career. 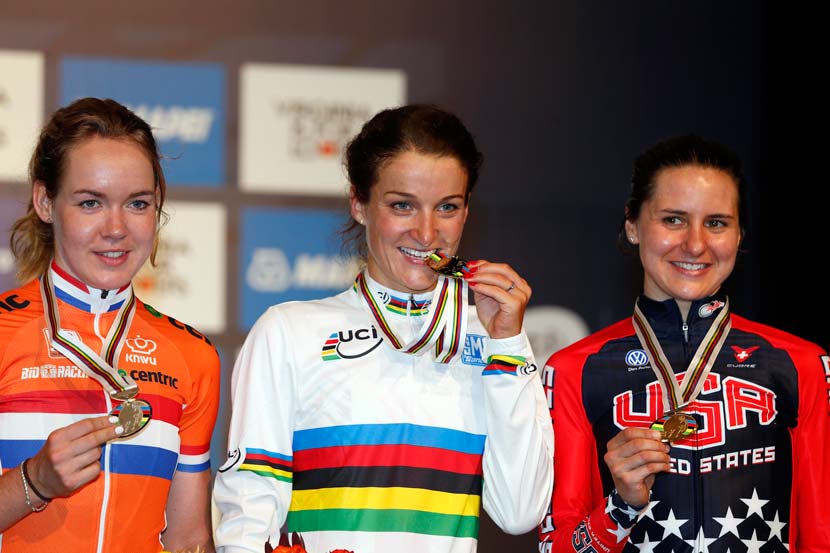