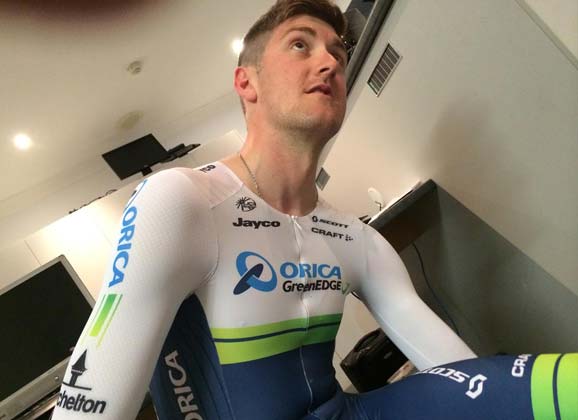 Luke Durbridge on his TT position

A few weeks into training for the 2015 season, Luke Durbridge said he was starting to feel like he was getting up to speed. His form doesn’t dip too much but he did allow himself a little bit of time off the bike before cranking things up again. He’s been a professional cyclist for three years already. Before signing his first contract with Orica-GreenEdge, he was the under-23 time trial world champion (2011). Before that he had been the junior TT world champion.

His life is now all about the bike. They call him ‘Turbo Durbo’ and there have been numerous features written about him in RIDE over the years including his first interview when he had won his first rainbow jersey in Russia back in 2009. ‘Senior Junior’ was the title for he seems well ahead of his years in many ways. He approaches his career with true professionalism and he’s matured into a formidable senior rider.

In 2014, Durbridge made his debut in the Tour de France. He suffered through to the end and took it as a lesson. It was hard but it didn’t beat him. He’ll be back for more.

He has a set of goals that he’s working to achieve. “One of them,” he confesses, relatively reluctantly between sessions in the wind tunnel at Monash university, “is to have a good crack at the time trial at the Rio Olympics.”

He laughs after vocalising that ambitious objective. “May as well aim high, huh?” 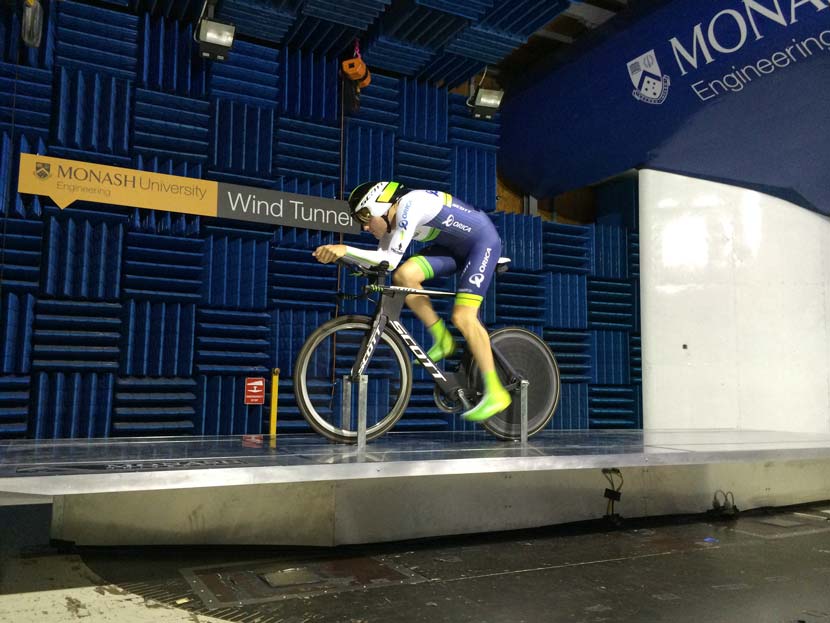 Early last week, Durbridge rode four-and-a-half hours on his time trial bike. He settled into an aero position and set off around the hills of Perth for a solo session. Then, on Friday, he was in Melbourne for the Cyclist of the Year awards night. Before dressing up for the black-tie function, he pulled on a skinsuit and looked into the wind. Along with Michael Hepburn and Caleb Ewan, he was subjected to a range of tests and Monash university’s impressive facility. The aim was to find the optimal aerodynamic position for a rider who hopes to beat the best in Brazil in 2016.

RIDE joined the Orica-GreenEdge trio for the day and there will be a feature on the visit to Monash in the next issue – RIDE #66, due out mid-December. (You can find a gallery of 15 images from the day here.)

After his session in the wind tunnel, Rob Arnold sat down for a coffee with Durbridge and asked a few questions about his experience.

RIDE: Luke Durbridge, it’s nice to talk to you without being on the telephone. You’ve just been in the wind tunnel and did a few experiments. What do you take home from the little lesson at Monash University?

Luke Durbridge: “This is my third time in the tunnel but I always find every time I go in that I get to take away a little bit more. This time, I think I’ve got my position quite dialled. As you could see there were a few areas there that I changed, going lower, to higher, to medium, to wide, to narrow… but I think my position is pretty good as it is and maybe I might make a slight adjustment here and there. But it’s always a tricky one, the wind tunnel – there’s being able to produce it in the tunnel and being able to produce it on the road.”

It’s all pretty obvious. People can imagine what it’s like. But when you’re going through a long day, do you feel like your position could change even just [during the time] in the wind tunnel? Are you adjusting yourself like you might in a race just because you’re sitting around for a few hours in the same spot…

“Yeah, for sure. In a race I always find that you can have this great position – and I’ve tested them over and over again – and you’ll go out and ride at tempo pace and go, ‘Oh, this position is quite good.’ But when you go out of the blocks full-gas in a time trial and you get in your position and you go for it, that’s the only time you really know, ‘Is this a good position for me or not?’

“I guess it’s about taking this position and going, ‘Okay, now I’m going to go and really give it a test in a time trial and see how it weighs up.’ And that’s where you’ve really got to work out, ‘Can I put out – produce power – in this position?’ If I can’t it’s not worth having.”

When you do the position testing in the tunnel and you transfer that to the road what are you using as mental reminders of the exact spot to put yourself in?

“I have a couple of reminders. One is my eye angle. I’ll never look too far into the horizon because that’ll bring my head too [high] up, so I’ll look just above my aerobars, just enough to see a couple of hundred metres in front. And then I also have to have a market with our Scott helmet. Generally with whatever helmet I have, I’ll have a little marker of where the good position is and I can feel it in the middle of my back.

“The whole time with the Scott helmet, I’ll put [it] in a position where I can always feel the back of the helmet touching my back and I know that’s the ‘right’ position. If it’s not there, then I’m obviously not holding in the correct position.

“Some training sessions, I might even go out with the aero helmet on and look like a bit of a triathlete riding around…”

What about the way you’re sitting on the saddle. Do you feel that under your arse?

I heard you saying that you wished you were a couple of centimetres taller. If you had not limitations from the UCI, how would your bike position change?

“I’d be sitting longer. As it is, I pretty much hold the end of my aerobar with my pinky. I’ve got quite long arms and it’s quite a disadvantage for me because I would prefer to go maybe five centimetres longer, maybe more – 10 centimetres – longer on the front so I am actually comfortable and can grip the bars properly… at this point [in the enforced position] I’ll find myself hitting a bump and slipping off quite easily because I’m so limited.” 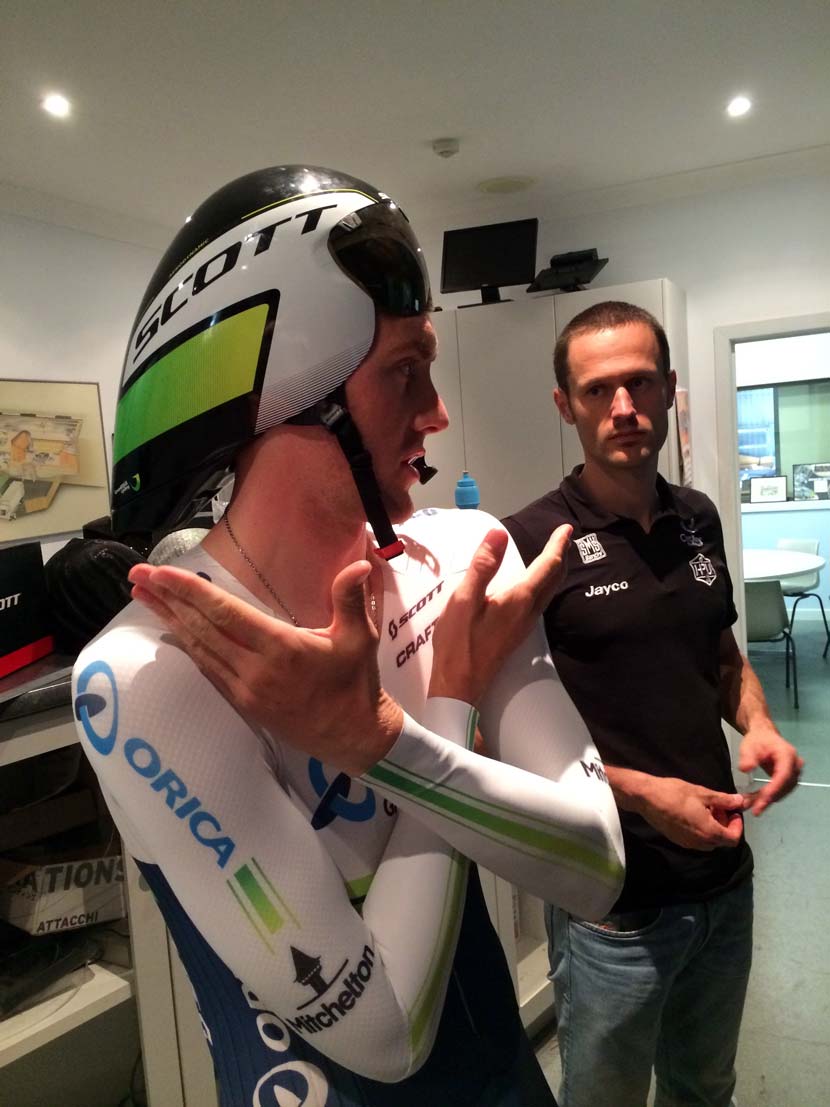