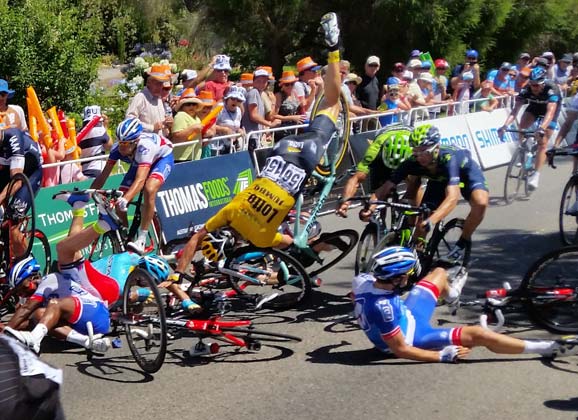 With 170 metres to go in stage four of the Tour Down Under, something nasty happened. A crash took out a number of riders. There’s been plenty of replays and it shows riders and bikes flying through the air. Maarten Tjallingii of the Lotto NL-Jumbo team was one of them.

RIDE spoke to the Dutchman as he was pinning numbers on his jersey to start stage five. At around the 50km mark, he abandoned but he believed it was worth having a go to see how his body coped.

[Note: This interview as first published on 24 January but the additional photos – the sequence of the crash by Adam Feilding who has the EuroCyclist blog – were offered for use in February so the post was updated.]

Click the photo below to see Feilding’s sequence from the 170m to go mark.

Click the Soundcloud file to listen to the discussion and/or read the transcript below to find out what he had to say about his injuries, the responses to the crash, and why there’s not one to blame…

RIDE: I’m amazed to see you here today and I think a lot of people who saw the images [of the finish of stage five] would be too. How did you pull up?

“Walking is not my favourite thing to do at the moment so I hope [being on] the bike is going to be okay.”

When something like that happens, there’s no time to react is there? But do you see it in slow motion? What image goes through your mind?

“I don’t know. Yesterday I remember that, at one moment, I just closed y eyes and said, ‘Okay, it’s happening. I don’t know what happens… we’ll see.’

“I don’t know if I could do anything but I just thought, ‘Okay, duck.’ So I pulled my head in and unfortunately I didn’t roll further than I did but I think that the rolling position would be the best option in such a crash. But that’s [after some time] to think rationally. At the time I don’t think I did anything rational – it was just impulsive.

“Well, yeah… I’m happy to be here pinning my numbers on my shirt.

“The fact that I’m pinning them on is [because] it’s a last-minute decision to start. It’s just because the doctor said it’s not going to be any trouble more than it is already. I’ll just give it a go and see what happens.”

Can you give a summary of your injuries?

“It’s just a little skin loss on my leg and my arm. The rest is my lower leg and the calf muscle is really tight and one of the bones hurts a lot.

“I don’t know what happened, if it’s just the ligament on the tendons or if it’s the muscle or if it’s the bone. So we’re just going to see how it goes today.”

There’s been a lot of footage of the [accident] on social media, including Jérémy Roy’s on-board camera. People are trying to piece together who was responsible. Did you see any…? And do you have any opinion on who was to ‘blame’…?

“I think it’s a race and we all go for the victory and it’s normal that – well, as much as you can call it ‘normal’ – that you’re fighting on the edge of the knife that things happen.

“I don’t know if you want to look for someone who is to blame because it’s always – how do you say it…? There are certain situations that come together and one time it works out well and the next time somebody loses control and it doesn’t work out. That’s what we saw yesterday. It was just an unfortunate coming together of individual factors. That’s usually part of a crash, that’s it.

“Do you want to blame somebody? I don’t know, I don’t think so. I don’t think that’s a good idea because then it’s time to stop cycling.” 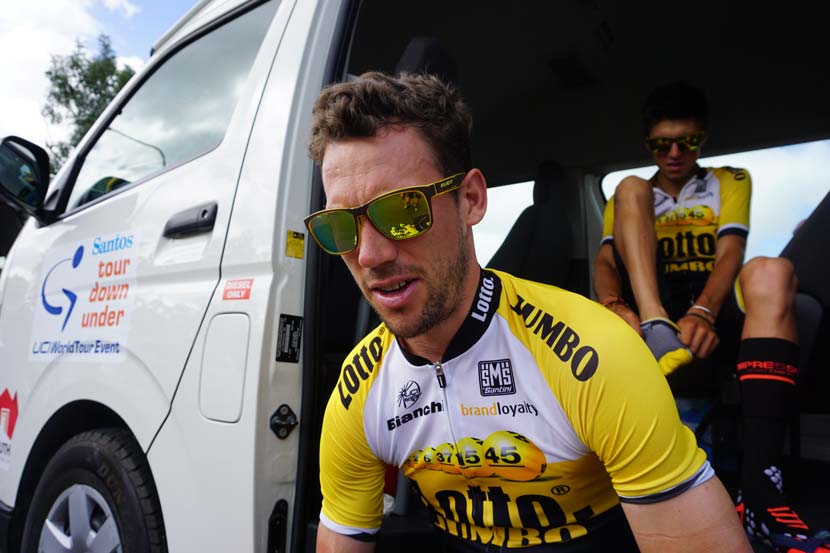