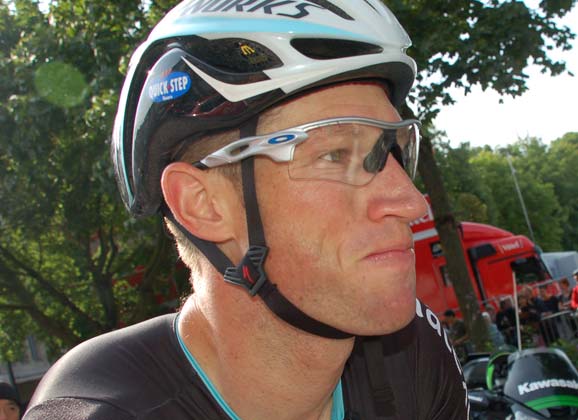 It’s early October and for some pro cyclists, thoughts have already turned to the 2015 season. For some racing 2014 is still very much on in earnest. The Tour of Beijing begins tomorrow and the Giro di Lombardia was on only a few days ago… but after an off-season of one month, Mark Renshaw knows that the gym beckons and bike time begins again next week.

The Omega Pharma-Quickstep rider has been back in Australia for a fortnight. The weekend, the motorsport world comes to his town. Bathurst is alive with grumble of V8 engines and festivities associated with one of Australia’s biggest races. Renshaw has been known to do a hot-lap or two. He was raised following the Holden Racing Team and he’s become friends with numerous V8 supercar wizards.

In the next issue of RIDE, we’ll be profiling a number of drivers who have become passionate about cycling. And, as we approach the weekend of the Bathurst 1000, it seemed a timely moment to catch up with Renshaw.

Click the link to the podcast below to hear a 10 minute chat with Rob Arnold about his appraisal of the new world champion – team-mate Michal Kwiatkowski, what it was like winning and leading GC in his final race of 2014, what he thinks about when he thinks about racing again… and, of course, what it’s like living in two motorsport havens: Monaco and Bathurst.

Note: The quality of the audio isn’t great… sorry about this.

RIDE: I’m speaking with Mark Renshaw just because he’s back in the Land of Oz.. His last race [for 2014] was the Tour of Britain, where he won a stage and led [GC] for a day. I thought we’d get his thoughts on the end of season and what it’s going to be like racing with the world champion [Michal Kwiatkowski] next year. Let’s start with what your take on the world championships was, Mark…

Mark Renshaw: “It was, I think, a pretty spectacular race. It was definitely world championship level with the excitement coming down to the final. Obviously for me it was disappointing to see Simon [Gerrans] not win; he’s a good friend and we do a lot of training [together] throughout the year. And we both have the same trainer. We’ve got a lot in common and it would have been great for Australia to have another world champion.

“On the flipside, to see Michal win and next year racing with him is going to pretty exciting.”

We’ve done a couple of pieces with Kwiatkowski in the magazine as well as online. So I’m getting a little picture of what he’s like. I’ve spoken to him a few times but I wonder if you could give us a little bit of insight from your experience of riding with him this year.

“He’s a great guy. He’s funny. He’s down to earth. He’s a talent – an incredibly big talent on the bike. I’m really proud of him.

“He’s still a pretty young guy but he’s got a level head so he’ll go a long way in this sport.”

How would you classify him…? What category would you put him in?

“He’s a jack-of-all-trades. He can climb. He can sprint. He can time trial. He can do just about everything.

“He can ride the Classics. He can ride [well] in the Ardennes… I think that’s why he was able to win the world championships this year. He showed a lot of different characteristics in riding: you know, attacking in the final, taking big risks in the descent… so, I think in the future he’ll win a lot of bike race.”

Did you have much to do with him during training camps or during the Tour [de France]… do you talk to him a lot?

“I’ve done a lot of racing with him this year so I’ve been lucky enough to spend a lot of time with him on and off the bike and in the team – and team meetings. He’s well ahead of his time. He’s already got that cool, calm head for how to win. And he’s definitely a classy bike rider.”

And how is ‘Cav’ going to cope with having another rainbow jersey in the team but not on his shoulders?

“I think it’ll work out fine. [Mark] Cavendish is a pure sprinter and I think Kwiatkowski is happy to work for Cav. We’ve seen him in the lead-out; he’s more than happy to pull 100 percent for Cav and look after him.

“I don’t think there’ll be any trouble.

“I’m sure Cav is going to come back bigger and better next year.”

(Be sure to click the SoundCloud file and listen to the full discussion.)