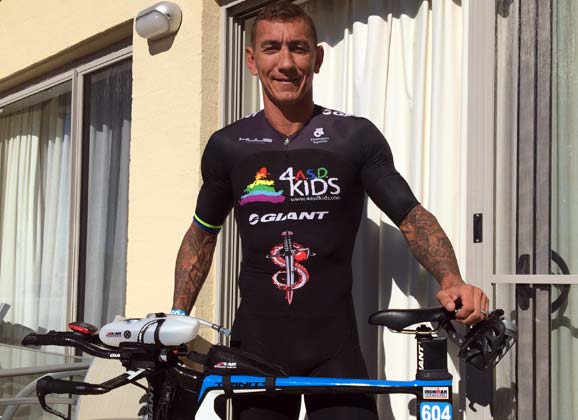 We’re closing in on September. Footy fever is in the air. The finals are almost here. And there’s a sporting buzz around a nation. Last week we posted a query on RIDE’s Facebook page asking what football code readers favoured. The reaction was a strong one with over 300 answers (and still counting) and it seems AFL has a slight lead over soccer, rugby union and rugby league. 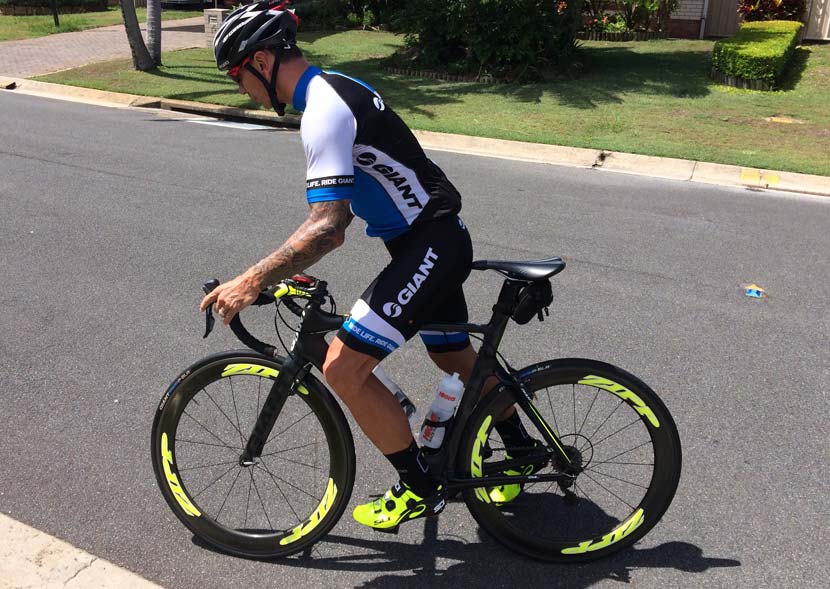 Mat Rogers sets off for another ride on the Gold Coast.

Of late we’ve been hearing how many professional footballers have discovered cycling and are doing it not only as cross-training but as a way of socialising… and even as an extracurricular sporting activity. Leading the way for the retired footy pros is Mat Rogers, the former league and union international. He doesn’t just like riding, he loves it. “Cycling is just a great sport,” said Rogers while gushing about its many positive attributes. “Anybody can do it. That’s the good thing about it: anyone can ride a bike – whether you’re good or bad is irrelevant.”

Rogers was raised in a rugby league. He switched codes, boosted his reputation as a union player, and returned to league before retiring several years ago.

“I love riding and if I’d discovered it with the same passion that I had for rugby league at a young age, and I’d ridden down that path – or even just been shown that path – I probably would have taken it.”

Talk to anyone who has ridden their bike in a group and they generally explain how there’s great camaraderie, how it’s a great release, how it’s a great equaliser… but Rogers’ regularity on the bike means he sees things differently from when he was part of an entirely different kind of group mentality. He offered a key observation about the benefits of cycling, one I’ve never been told before and it’s beautiful: “There’s something about being shoulder-to-shoulder with someone and communicating as opposed to being face-to-face,” he explained.

“People communicate better when they’re shoulder-to-shoulder because no one is trying to dominate the conversation. I just feel like we’re more on the same level. When we go out riding, some of the conversations I have with blokes that I barely even know are amazing!”

Together with a few V8 Supercar drivers and former pro cyclist Robbie McEwen, Rogers has recently shot a road safety campaign that will be broadcast in Queensland. “I understand that you get dingbats in every field, guys who want to be an idiot and that’s no different in rugby league or cycling or car racing or whatever – there’s good and bad in every group. It’s scary though when you’re on the bike and somebody nearly hits you… mate, that’s not cool.”

He said he’s been “clipped a couple of times” but that hasn’t put him off his adopted sport, it’s strengthened his resolve to spread the message that respect is the key thing to safe road use.

“Some people carry on about it and they think it’s an ‘us-versus-them’ but it’s not… it’s just about sharing the road and being respectful.”

The next issue features a ‘Why ride?’ on Rogers but it’s become apparent that his newfound enthusiasm for cycling has struck many other football professionals. 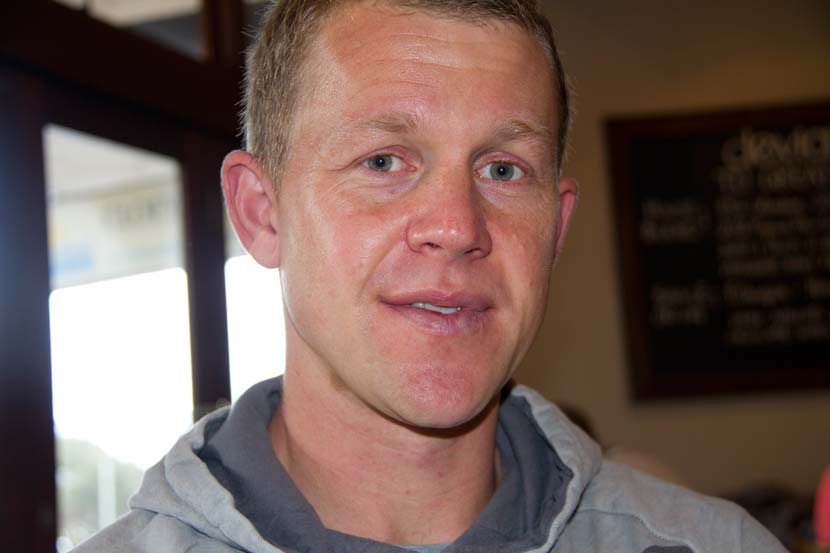 In the AFL realm, one of the biggest cycling converts is the 2012 Norm Smith medallist, Ryan O’Keefe of the Sydney Swans. He organises an annual trip with about 15 cyclists and has gone riding in places like Vietnam, Myanmar and, most recently, the Camino de Santiago in Spain.

He’s an ‘ambassador’ for Giant bikes and admits that he’s noticed the amazing evolution of equipment since he first started cycling seriously around 10 years ago. O’Keefe has also discovered that his grandfather was a racer who had competed in the Melbourne to Warrnambool back in his day.

Like Rogers, O’Keefe also enjoys his bunch rides, mainly in the off-season and/or pre-season, but he’s also a keen commuter who has “ridden his bike to work every day for 10 years”.

He called it “work” then said “training”. Whatever it is, he knows how to kick a ball. It’s been a while since he was last on the paddock for the Sydney Swans but after 15 years with the team, he’s seen considerable change in the way athletes have been prepared for his game. And the bike is becoming more and more prevalent.

“Cycling has been used as a tool and I have endorsed it,” O’Keefe said about the use of the bike for AFL training. “I’ve found it very beneficial.

“I haven’t had problems with my knees or anything like that but I’ve found the benefit from the leg strength and other things. You can smash yourself on the bike and, without all the jarring, there’s no real damage. I can do a four or five hour bike ride and my legs will be tired but the next day I wake up fine. If I did that running… I’d be pretty sore the next day.”

A mate of his introduced O’Keefe to cycling and only a few rides convinced him that it would serve him well in his chosen trade: playing AFL. “The year that I took up the bike, I had a really good pre-season off the back of doing the cycling and I thought, ‘This is really good.’ And so, ever since then, I’ve been riding to training every day – for the last 10 years.”

O’Keefe admits that he’s subjected to a volley of questions from team-mates come Tour time and it’s clear that some are staying up late to watch the SBS broadcast. Still, he’s the mainstay of the cycling community at his AFL club.

“I could probably say that I started the cycling movement at the Swans and I think our sport science and conditioning staff see the benefits I was getting from it. They put a lot of guys on the bike, especially guys who have had knee troubles. They have used it, particularly in pre-season, as a bit of a tool.

“We do one session a week in our altitude room on the Wattbikes.”

The team uses stationary bikes as tools for training, warm-up and cool down. And although the pedalling action is different to what’s required on the field, the fitness advantages have served O’Keefe well.

“I’ve played a lot of sports and is one of the most physically demanding games I think you can play. The game goes for up to two hours, I’d average around 16 kilometres per game – and that’s at high speed too, so you’d be doing two-and-a-half or three kilometres of that at over 18km/h. Plus all the extras: getting the hits, getting up and down off the ground, the stop-start, changes in direction, and then also trying to implement a skill level to it as well… it can be quite taxing.” 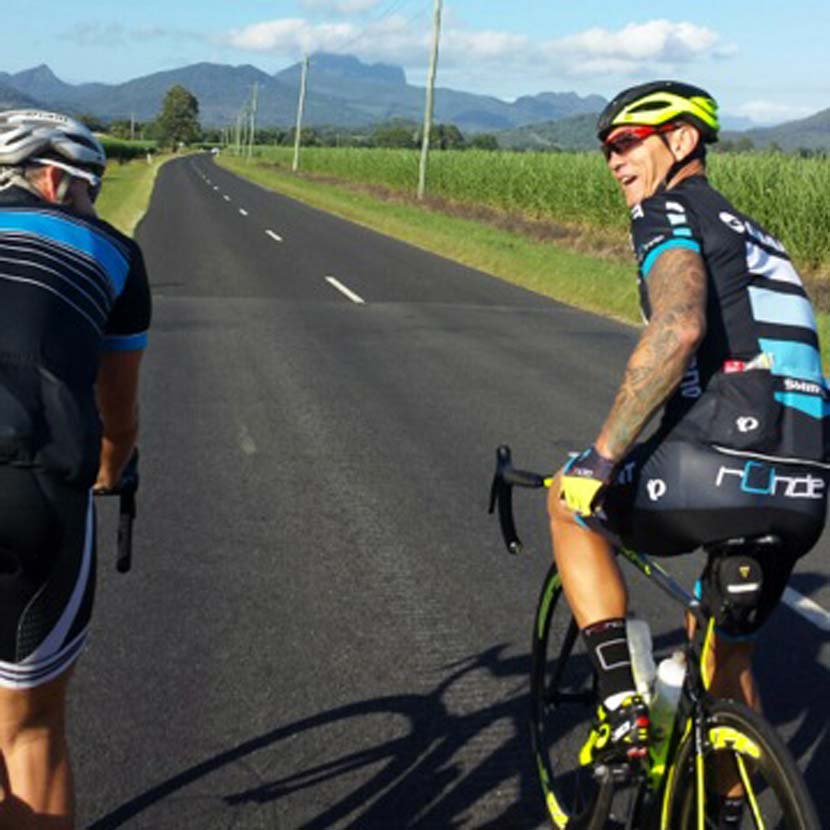 Professionals from one sport may be committed to their job but they’re not blind to the benefits offered by other physical activity. There are many footy fans in our readership and in the peloton. And there are cycling fans who have played at the highest level who love the act of pedalling. Another shared trait is what people get out of their exercise, no matter how it’s done…

O’Keefe offers his take: “After a game I’m quite exhausted and I wake up the next morning knowing that I’m pretty tired and hungry. It does wear you out but it’s just something that I’ve enjoyed. I just enjoy putting my body through stupid amounts of pain, maybe.”

Rogers took to cycling later than he’d have liked but he’s making up for lost time. “Since I got back into it and started doing some triathlons I just fell in love with riding,” he admits. “I just love the solitude of it. I love the fact that I can just jump on my bike and go riding for five hours and just enjoy the peace and quiet.”

To all who play and ride, share the joy. Get out there and have a kick, pass the ball, cheer your team, tell your stories, and enjoy the fact that we’re all in this together.