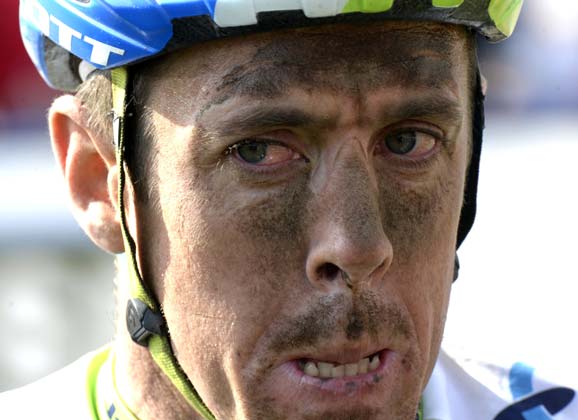 On the eve of his son’s third birthday Mathew Hayman was working on a Sunday. He was riding his bike to Roubaix over nasty cobblestones. Next week he turns 36 and he’ll have forgotten about the pain that was conjured while doing his job. The “video” in his mind, however, will still playback the images of the contest he’s come to love.

Beforehand the editor of RIDE Cycling Review had been put on the spot and asked if there was an Australian who might be able to contend for the victory… Mathew Hayman’s name came up. And thus it seems appropriate that, now that it’s all done and dusted, we catch up with the rider to listen to some of his stories and to find out how the race was for him. 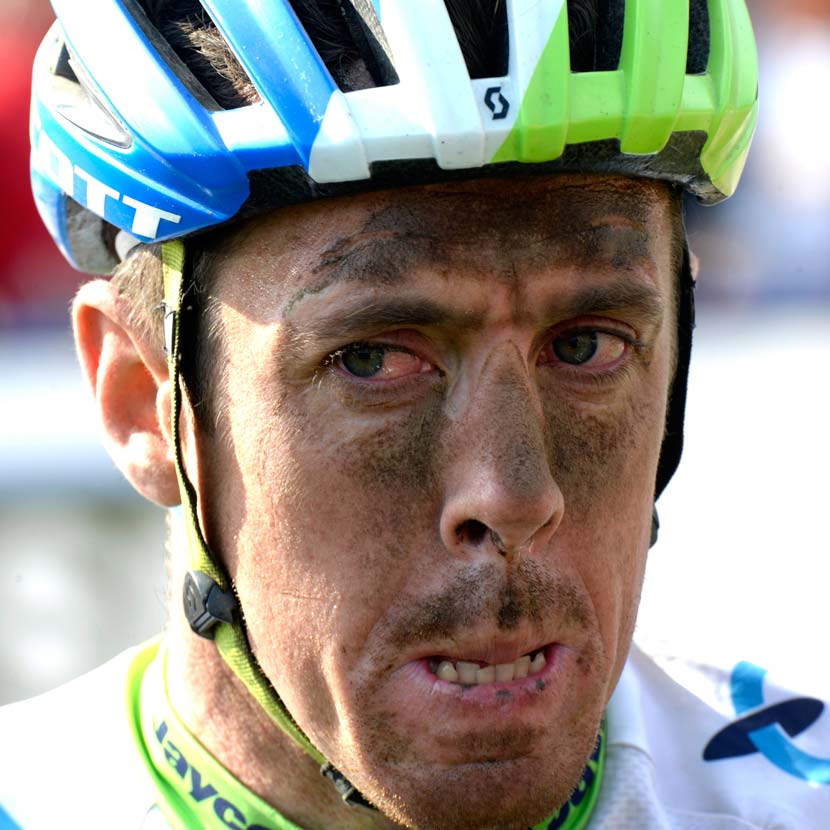 RIDE: If we could introduce this interview by saying that I was talking you up last week during a discussion about Australians in Paris-Roubaix. With around 70km to go yesterday, it seemed plausible that the winner had been spoken about. It looked like you were in really good form. Was it a good race for you?

Mathew Hayman: “Yeah, it was. It was also the first time I’ve gone into the race being the leader of the team and having that responsibility. Sometimes I’ve been a back-up or I have had a free role to look after myself always while keeping an eye on a leader. And that was one of the reasons for me switch teams last year. So it was good and the guys were looking after me all day.

“Obviously just to get into that final part of the race, you’ve got to try and get through the opening stanza.

“The real race doesn’t really start until after Arenberg. And a lot of it the early bit is about trying to get to that point while conserving as much energy as possible.

“It was good to have the guys around me and I was feeling pretty good but it was a bit of a strange race with the headwind and Fabian [Cancellara] losing a lot of team-mates early on.

“I was feeling good and was able to use my experience to know how to manage it all. Even though you may feel good at a certain point, it’s a race of 260 kilometres and if you try and do too much then it can easily come back to bite you.”

Let’s just clear things up for anyone wondering why you finished over four minutes behind the winner, Niki Terpstra. You had a puncture just 10km before the finish within sight of the group that included those who eventually raced for second place… is that right?

“Yeah. We came off the Carrefour de l’Abre and I still had Jens Keukelaire with me and we were part of a group of four or five riders. There was only one real set of cobbles left and it’s not a particularly hard one, it has a bike path on both sides, and pretty much everything in the race is done by that point. Then I came around a corner and felt my tyres start to go and we were just 100 metres behind that key group of riders that ended up sprinting for second. But that was it for me, I had to pull over.

“The Mavic spares were there pretty quickly – and I wasn’t going to ask a team-mate to stop at that point because we’d have just lost both of us – and Jens was pretty much done at that point. I changed wheels, got back in with another group about a minute later and then when I was actually on the last section of cobbles, the wheel I got from Mavic folded in two and I ended up having to wait again.

“So, twice in about three kilometres, I had to stop and wait for neutral spares.

“Then I waited again for a second or a third group and, finally, I got another wheel and the guy from neutral spares took what seemed like a very long time to put my wheel in… and then I got going again and just rode to the finish.

“When you’re that fatigued, it can get pretty emotional afterwards. You think, ‘I’ve battled for so many kilometres. I’ve done a lot of things right… but…’

“I had a puncture early on in the race but that’s to be expected almost. I had team-mates there to support me. They gave me a wheel, got me back on really quickly and everything. But with 10km to go in the race, there’s no more second chance.”

These are the stories that don’t get told on the television broadcast. There are a lot of tales that come out of the dust after a race like Paris-Roubaix, aren’t there?

“Everybody has a story. I’m not sure if it was shown but I can tell you one that’s not about me. Sam Bewley was looking after me all day and he got taken out by a car in the convoy. I’ve heard from another rider that the cars were parked up because they were being stopped for something going into a cobbled section and one of the cars must’ve got the call-up to get going again and just jumped out of the line of cars and took out a bunch of riders without even slowing down.

“Sam ended up going into a ditch and breaking two bones in his hand and he’s getting operated on today.

“It’s a dangerous race and everybody has got stories about mechanicals or punctures and things like that.

“It may all look pretty smooth up the front but down the back it’s pretty chaotic.”

What is this, your 12th Paris-Roubaix?

“I think it’s my 13th. I’m starting to lose count but I remind myself of the tally by saying that I’ve missed two since turning professional [in 2000].”

Of all of those, is this one more of a highlight because you were the leader or do you remember fondly the years with Rabobank and Sky?

“They’re all different. I enjoyed working for different guys at Rabobank. There were some real racers who enjoyed this race: Leon van Bon and Marc Wauters back in the day, right through to working with [Juan Antonio] Flecha – there is a guy who probably deserves to have his name on the list of winners but he never did. He was on the podium a number of times and finished often in the top 10 but he never got to win it.

“When you’re a bit down after a race like yesterday, I remind myself of him. I just like to keep getting some nice results in that race but it’s not just because you want something that you get it.

“Flecha probably deserves more than anybody to win that race at one point in his career but it never happened for him.

“It’s a bit of a hard race and although it does throw up some strange winners every now and then, everybody who wins it deserves it thoroughly. They had a good run on that day and I just keep hoping that it’ll happen to me one day.

“The couple of years at Sky…? Yeah, I was riding either with a couple of leaders or as a second leader in the team. I rode well with Flecha a couple of times… upon reflection, pretty much every time I get to race Roubaix is a highlight. But there have been a few lowlights as well.”

With the way you describe your misfortune in the last few kilometres of this year’s race, it prompts the question if you feel like a gladiator. You talk about the crashes and pain and yet before too long, you’re already considering when you’ll be blessed enough to get to do it all over again. Does it feel a bit odd to you – is it a love/hate relationship?

“But I look back and think, ‘How did I get myself to that point that I’d convinced myself that this is my lot…?’

“This is something I’ll get through in the next couple of days and, before I know it, I’ll be remembering the good things and not the bad.

“There’s the good part of having the guys around me, feeling confident in them being there for me. I mean, Mitch Docker and Jens had great races and the other guys behind the scenes did too, maybe they weren’t on television but they were doing a group job. It was good being with a bunch of ‘Aussies’ – okay, there are a few foreigners there but they are all guys who are starting to enjoy these races and starting to feel the passion and understand how these Belgian fans get their enthusiasm – where it comes from and how deep it goes, and how special these races are for people.” 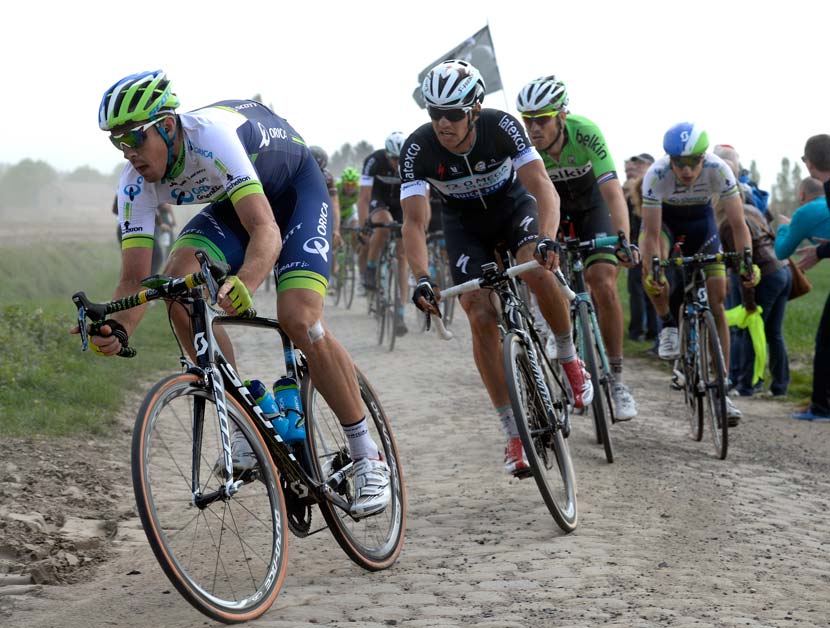