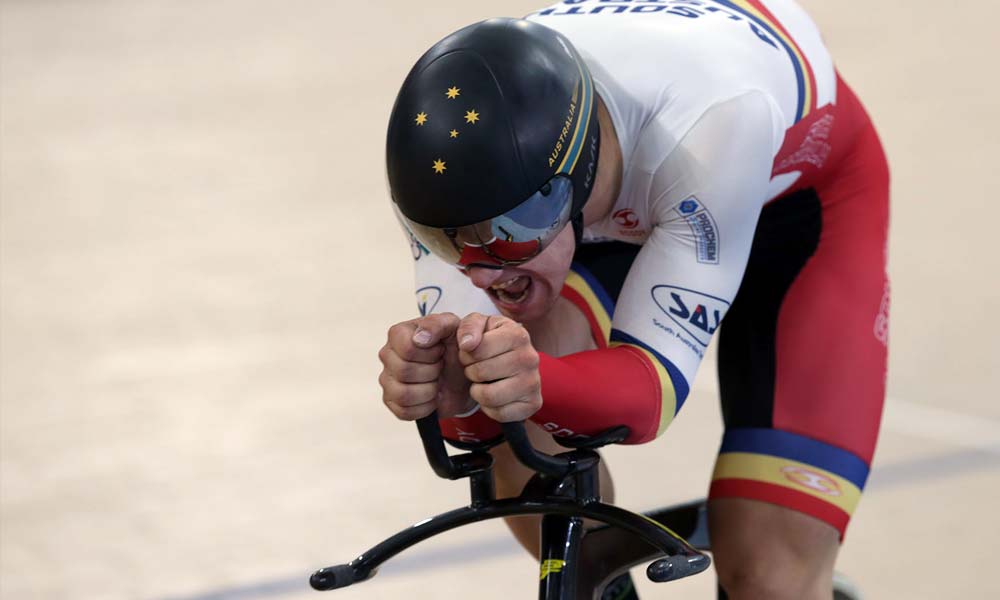 Another kilo, another sub-minute time for Matthew Glaetzer. He is a calm customer who is happy to talk about his cycling and, a day after his 59.759 at the nationals, he spoke to RIDE…

He’s a sprinter and a keirin specialist who just happens to go well in the ‘kilo’ time trial. Matthew Glaetzer is set to represent Australia at the world championships in late-February, early-March… and he spoke to ride about going under the one-minute barrier for the second time in four months.

The team sprint, individual sprint and keirin remain the focus for Glaetzer as the Tokyo Olympic approach but he also gets to fiddle around with the kilo.

The 1,000m TT is part of both the world championship and Commonwealth Games program and it’s likely that Glaetzer will contest both in the coming months.

– To listen to our interview with Glaetzer, click the file below – 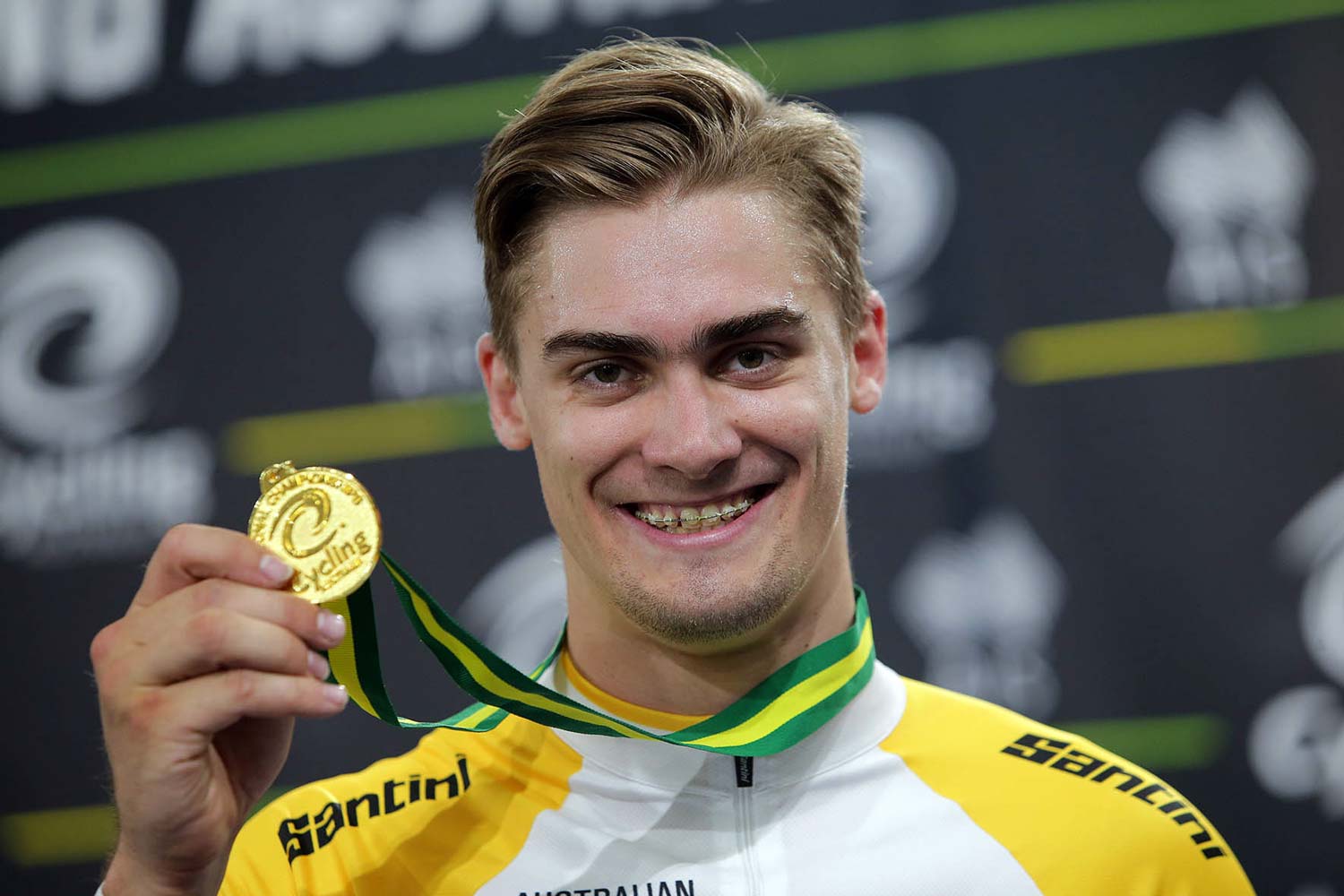 Listen to our interview with Matthew Glaetzer, click the file above.

RIDE: It’s the Friday of the track nationals and I’ve got the ‘kilo’ Man of the Moment, Matthew Glaetzer, having a chat with us. Well done on another sub-minute kilo. Amazing.

Matthew Glaetzer: “Thank you. Yeah, I’m really happy with that ride. It was always going to be a challenge to best my time [from Manchester in November 2017] but, as all athletes who push themselves – they’re always up for the challenge – and yeah, I managed to rip out a really fast time.”

There’s a beautiful photo by John Veage which we shared and also one that you put on your Twitter where it’s showing you going down the back straight and you’re in the most aero position I can remember for a big bloke who is gunning [in] the kilo. Is that about the most perfect position for you aerodynamically?

“It’s getting there. It’s something that we’ve been working on because, as you said, I’m a pretty big lad. So, if I can get some gains by just tucking up a bit better then we’ll try and go for it.

“It seems to be a really nice position for me at the moment.

“I was in it quite comfortably as well through the race, which is important.”

You’re into the aerobars by turn two, is that right?

“After the lap. So, completing the first lap, I get into the bars.”

And your first lap is an 18… something. Can you remember what it was for that amazing ride?

“Yeah, I’m pretty much just trying to copy the team pursuit boys because they’ve been working on their position. And it’s just the most aerodynamic set up in that regard that we’ve found so far. It’s not perfect just yet – we can still make some improvements – but it’s definitely much better than what I’ve previously raced.”

We’re cycling media, so we like to get into the specifics. With the BT bikes, it’s a design that’s been around for a little while and it was refined for Rio. Have you got any special amendments for your bike because you’re such a powerhouse?

“And it’s nothing really special, for me in particular. Maybe a bit of a longer head stem but other than that, it’s just as anyone else would buy.” 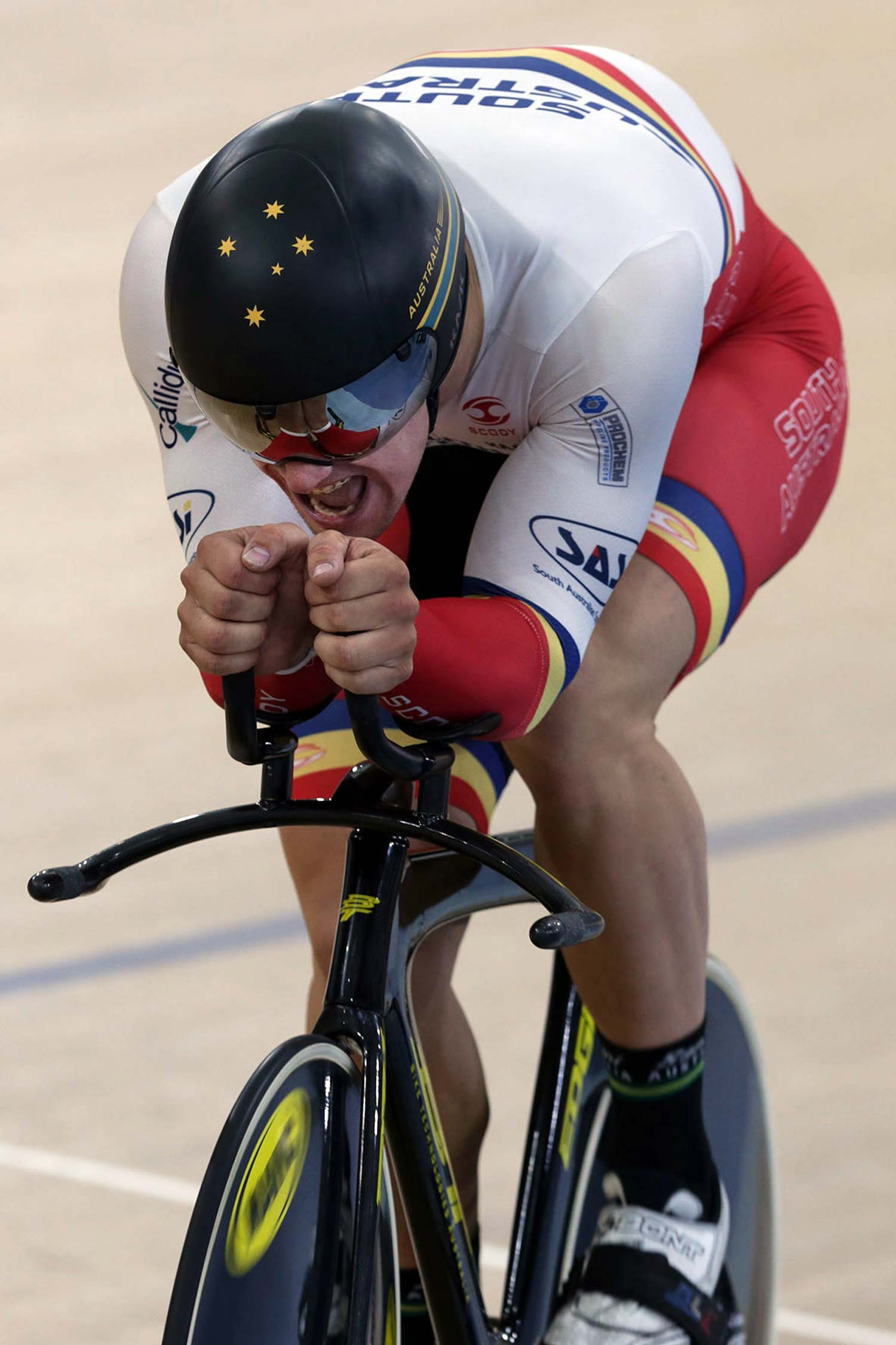 Now, you had your SRM under your saddle. Can you give us a little bit of data…?

“I haven’t actually gone through any of that with my coaches yet. I don’t know, to be honest.

“I’m one to not look at those things. I’m more of a… get up there, do the race, enjoy it, and then move on.

“I’m not one to harp on about the numbers.

“People ask me about what I do but I think, ‘Well, I didn’t actually check.’ So that’s one thing I don’t know.”

Well, then let’s talk about feel because that’s what you’re going on. You’ve now done two sub-minute kilos, one in Manchester, one in Brisbane. And from my understanding, neither were in terribly warm conditions. Do you think that you can sort of start knocking on [François] Pervis’ door if you go up to altitude and get some good, warm conditions? (Note: Pervis set the world record, 56.303, in Mexico.)

“I think if I do go to altitude, I’d be confident in getting that world record.

“It is, I think, transferable from sea-level to altitude in warm conditions.

“I’m going really well at the moment and just going faster and faster each time so I’d like to think that if I go into similar conditions that he rode that kilo in, I would be a very good chance in breaking that time.”

We wait to see when you next go to Aguascalientes…

“I know. I keep waiting until that name pops up as well.

“As soon as that is held, it’s essentially a world record attempt for everyone. It’ll be pretty insane when that happens.”

Exactly. You’re one of the four guys who got selected to go to the world championships for Australia this year. They start at the end of this month. I would dare say that you’re the favourite for the rainbow jersey. Do you see yourself in that light?

“Oh… I don’t know. It’s definitely building confidence with the rides that I’m doing and it’s giving me a sense of belief that I can achieve it, but you don’t want to count your chickens.

“It’s a matter of, look: I’m going really well at this event and I’m definitely gunning to try and win that event at the worlds. But you never know what the other countries are doing.

“You can’t be claiming that you’re going to win something before you actually race it at these sorts of championships. There are some quality guys that I need to beat so we’ll see. But I’m confident.”

Who would you most be looking out for at this stage because the kilo is sort of one of those anomaly events: you don’t know if the fastest guys are actually going to be racing it. Who is the main rival come Apeldoorn?

“I would say, Joachim Eilers from Germany. He is always strong at the kilo.

“And François Pervis: I mean, he’s performed so many years in a row in the kilo. He’s always the man to beat.

“You never know who comes up and who’ll be targeting that event as well. But, to honest, I don’t focus on the guys that I’m trying to beat. It’s more of trying to post a quicker time and just have fun with it because that’s the stage I’m at in this event.

“I don’t really target individual people and I’m not exactly sure who is going to be on the podium. So, it’s a matter of just making sure that I rip my race so it’s fast enough that other people can’t beat it.” 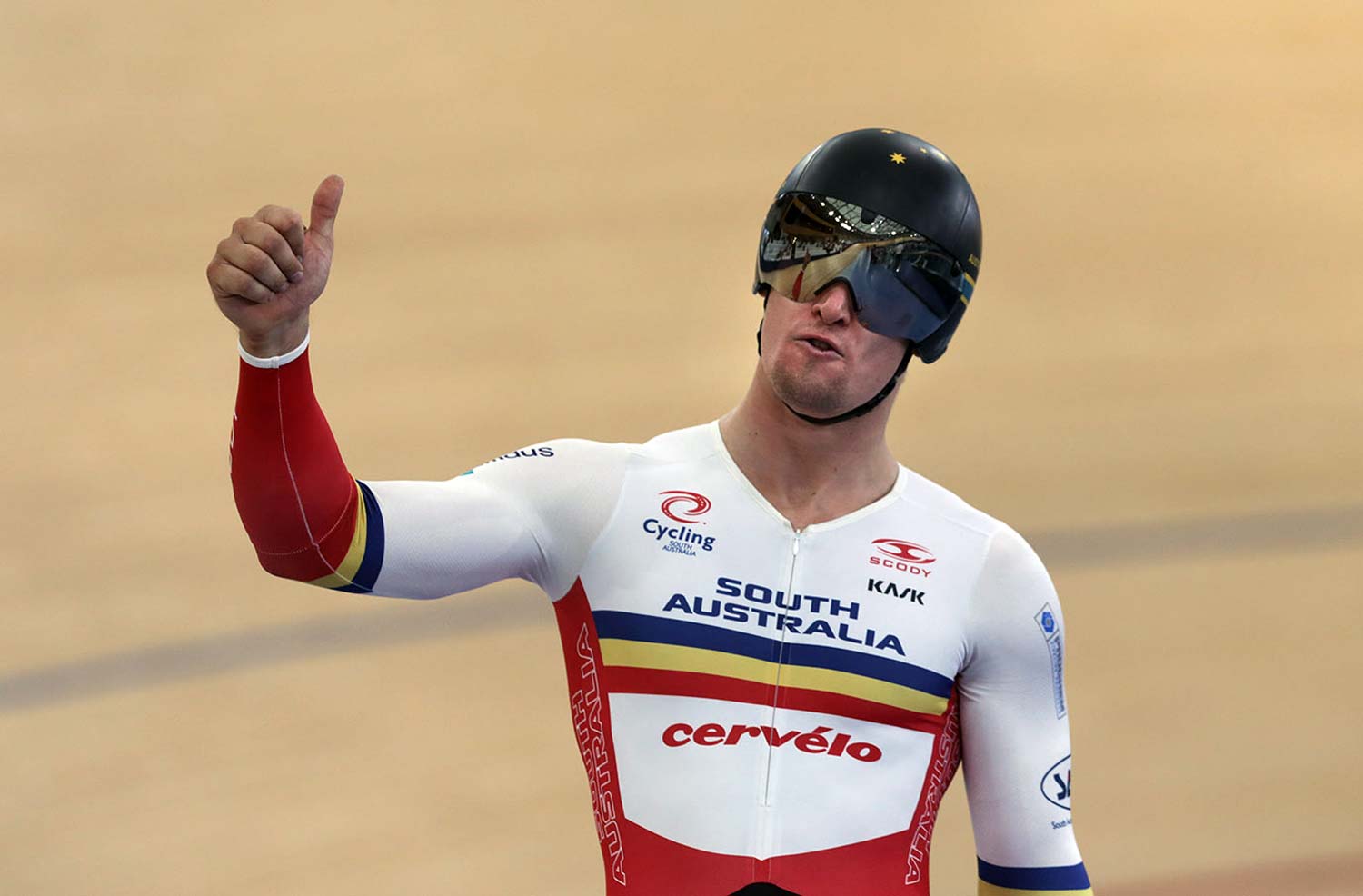 You’ve got an association with Nick Flyger… can you give us a little bit of background on him? He’s your coach at the moment. And he seems to be a guy who is turning fast guys into faster guys. What’s his secret?

“I think Nick, as a coach, comes from a sports science background and he’s always questioning why we do the things we do. And it’s a really progressive approach as to pushing his athletes and getting that extra performance and getting those gains that we’ve been seeing in recent times.

“So, instead of just accepting that we do these sort of lifts in the gym or this amount of effort on the track, he always questions that and asks, ‘Why is that the way that we do it?’ ‘Is there a better way?’ And, ‘What is that better way?’

We’re talking about the kilo because you’re smashing these fantastic times. But what’s your position in the team sprint and what are your expectations from the sprint and keirin. Are you looking at [competing in] all four event at the Comm Games? How’s that all going to work?

As well as the worlds?

“Ah yeah. So… world championships: obviously there won’t be a team sprint (for the Australian team) but I’ll be doing the other individuals, with the kilo, sprint and keirin.”

Yeah, okay. Thanks for pointing out the obvious. I forgot about that concept. [Laughs.] It’s going to be a little bit of a small troupe going off to Holland at the end of the month. How do you see that? Seems logical? Seem like… what’s your take?

“For us as a Cycling Australia team, we’ve brought on obviously a new head director with Simon Jones and he’s made some tough calls with staff and new stuff so it just comes with the territory that he’s prioritising events.

“At this point of the year we don’t need to sending a whole team to worlds and he views it best to focus on other events and use that time and resource elsewhere because that’s what it takes.

“I mean, we’re not swimming in money here at Cycling Australia so we just need to make sure we’re smart with what we’re doing. And, although it’s a tough call and some athletes – most athletes – are missing out, it’s an opportunity to think Big Picture because it’s always the Olympics that we’re focussing on. And you want to step away from the Olympics knowing that we did absolutely everything to try and maximise our performance in that competition.”

While we’ve got you [talking about] the Olympics. When you’re having the success in the kilo and you’re turning into a time trial specialists because of the results you’re achieving, do you still feel like you’ve got that kick that you require for the sprint – and the tactics?

“Yeah, that’s right. I’m mean I’m not doing anything really specifically for the kilo at the moment. So, I’m confident that I’m tracking and progressing in the other events as I need to be as well.

“Obviously, we know that the kilo isn’t an Olympic event so we need to be aware that there’s that in mind. The training is tiered towards the sprint and keirin and team sprint. And the kilo is almost a bonus event that I get to race at the moment.”

We saw one of the masters of the kilo, Chris Hoy, turn himself into the master of the keirin. How much do you think his success in the keirin, after his conquests in the kilo, were assisted by the fact that he could out-psyche his rivals… like, they knew that he could go long, for example.

“Yeah, that’s right. Everyone knew his tactic and they were almost submitting to him in the race and just wanting his wheel and almost racing for second.

“It was quite impressive to watch that.

“He was just almost in a class of his own at that point.

“The other athletes just couldn’t match him. He just had that length and confidence in his ability, and knew what worked for him, and committed to it. And he could pull it off.

“Even though it’s predictable, that’s the best race for him and it worked. So, he had success through that. It’s impressive.”

Do you think that stands you in good stead given what you’ve just done in Manchester and in Brisbane?

“I hope so. There’s a lot more tactical nous needed these days in the keirin because that extra half-lap makes a big difference in what happens during the race.

“When it was two-and-a-half laps for the keirin the pace didn’t drop off much at all. And it was who could be up the front when the pace is on… now it’s different but it’s a long race still and having a long sprint is definitely an advantage. So that’s playing in my favour and I just need to make sure that I apply that speed in the right areas and just try and be a bit more efficient in my racing to take that next step.”

– Listen to the full interview on our SoundCloud station –