Robbie McEwen loves talking about cycling. That’s his job now, and he’s very good at it. We caught up with one of the commentary team for SBS’s racing coverage and got the lowdown on what he expects from the Giro d’Italia… and a range of other topics.

The interview was arranged before SBS announced that it would once again be broadcasting the first Grand Tour of the season live on free-to-air TV. Robbie McEwen has been commentating on cycling for several years now and our intention when we organised our chat was to discuss calling the Tour de France from afar (ie. a studio in Australia rather than on site), and other things associated with his latest role in our sport.

And then came the news from SBS.

Most cycling fans have opinions on racing commentary, with mixed feelings on some of the voices heard while the action is unfolding. But there’s almost universal acknowledgement that McEwen’s insights and understanding of the intricacies of his sport enhance the broadcast of events like the Giro and Tour.

If you watch cycling on the box, you’ll soon hear a lot more of McEwen’s voice. Last year, he called the Tour from a studio in SBS’s Sydney headquarters, while Keenan, O’Donnell and McKenzie were based in Melbourne. For three weeks in late August and September of 2020, the Australian cycling commentary team made it seem like they were all in one room. They spoke with ease and worked off each other as they talked us through the Big Loop of France.

It helped that the Tour was a compelling race last year, with the winner only decided on the final weekend.

A month later, when the Giro was being contested, the only way Australian sport fans could watch the delayed Grand Tour was to pay for it: the GCN Race Pass was one option, but it cost and required a good internet connection and a bit of IT know-how to get it on a big screen rather than your phone or tablet.

There were two Aussies in the Tour in 2020, and 18 at the Giro. Thanks to SBS, we’d see Caleb Ewan win his two stages and marvel at the consistency of Richie Porte as he made his way to the Parisian podium, finishing in third place in his 10th Tour appearance. But when Rohan Dennis was on his domestique-duty rampage in the final week of the Giro, Australians missed seeing him in action on free-to-air TV.

Then, in the closing days, both Jai Hindley and Ben O’Connor won a stage each, and Hindley gracefully climbed his way into the maglia rosa on the final Saturday. It was compelling viewing… if you could view it.

The scene is set for a similar showdown, with the Giro d’Italia of 2021 beginning on Saturday. But you won’t yet hear McEwen’s voice on the SBS broadcast that begins at 9.50 Australian Eastern Standard Time. No, he’s not on the early commentary roster, instead it’ll be Keenan and ‘Macca’ for the opening stanza, then Keenan and O’Donnell in the middle week, and eventually the familiar pairing of Keenan and McEwen as the corsa rosa makes its way to the finish in Milan on 30 May. 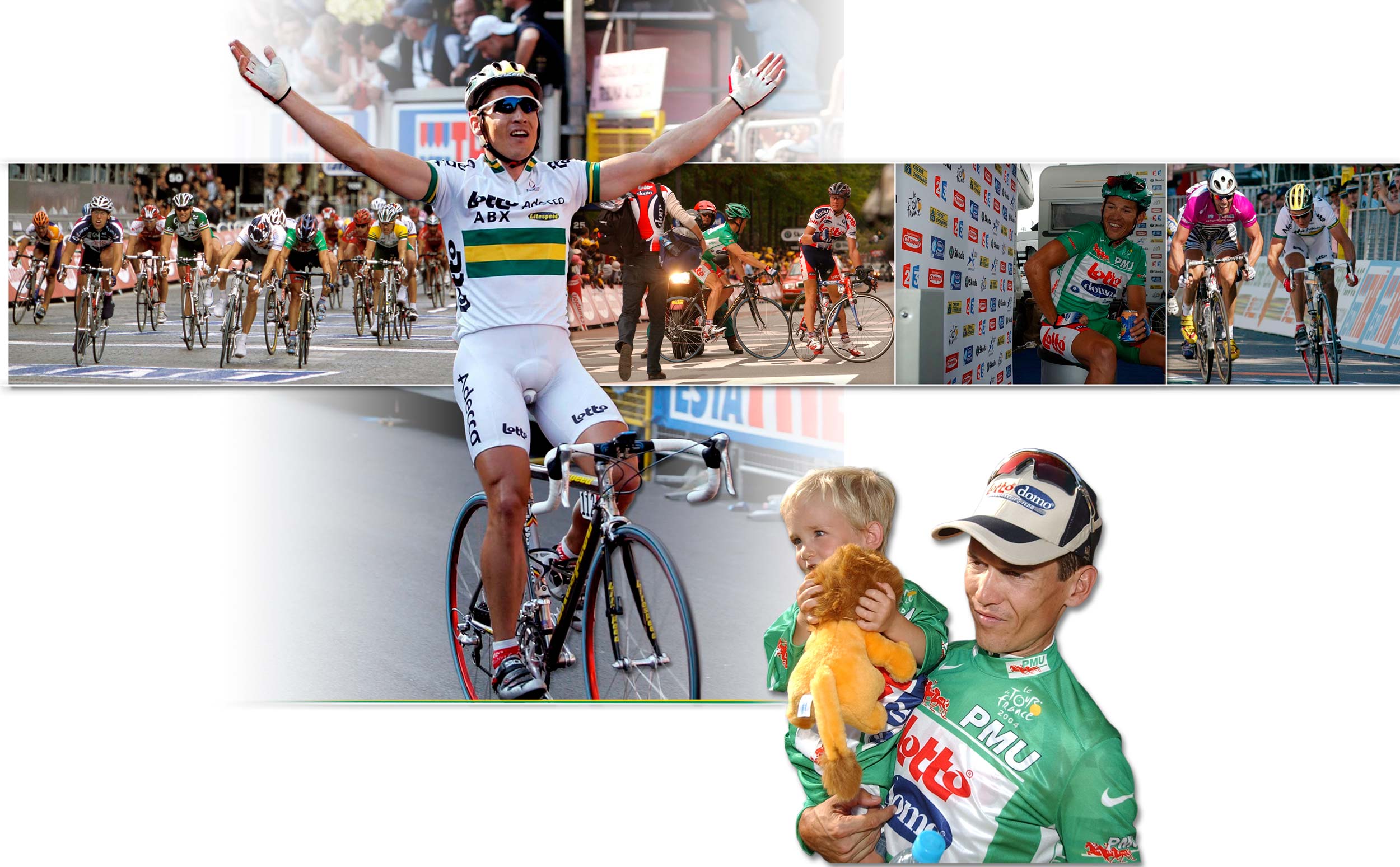 McEwen featured regularly on the pages of RIDE Cycling Review, this montage featured in the magazine in 2005.

When it was the scheduled time to talk to Robbie McEwen, I did an introduction and waited for him to join me in the online ‘studio’, and then a message arrived. “Lost track of time. Just finished a ride. Buzz you in 45 minutes.”

He stopped racing in 2012 and started commentating on racing shortly after that. And he makes sure he keeps in close contact with the cycling world, not just by calling the racing, but also by riding his bike… and he continues to do that on a regular basis.

“I always do the same ride,” he says of the 60km loop that usually takes him two hours (sometimes, he notes, it’s faster… sometimes slower).

“Actually, people comment on my Strava if it’s not the same ride,” he says. “They ask me if I’m okay.”

He’s regular with his riding but no longer racing, not even against himself or mates. “I’m just rolling along – just cruising. Enough to get to the end and go, ‘Yep, that’ll do.”

Not long ago, it was announced that McEwen was to become a brand ambassador for Trek and, in our interview, he explains his collection of bikes and which one he uses when. He’s still on the road bike regularly (a Madone) but the MTB and cyclocross bikes also get a workout, although he didn’t say if that was on the same 60km loop. (We could assume not.) 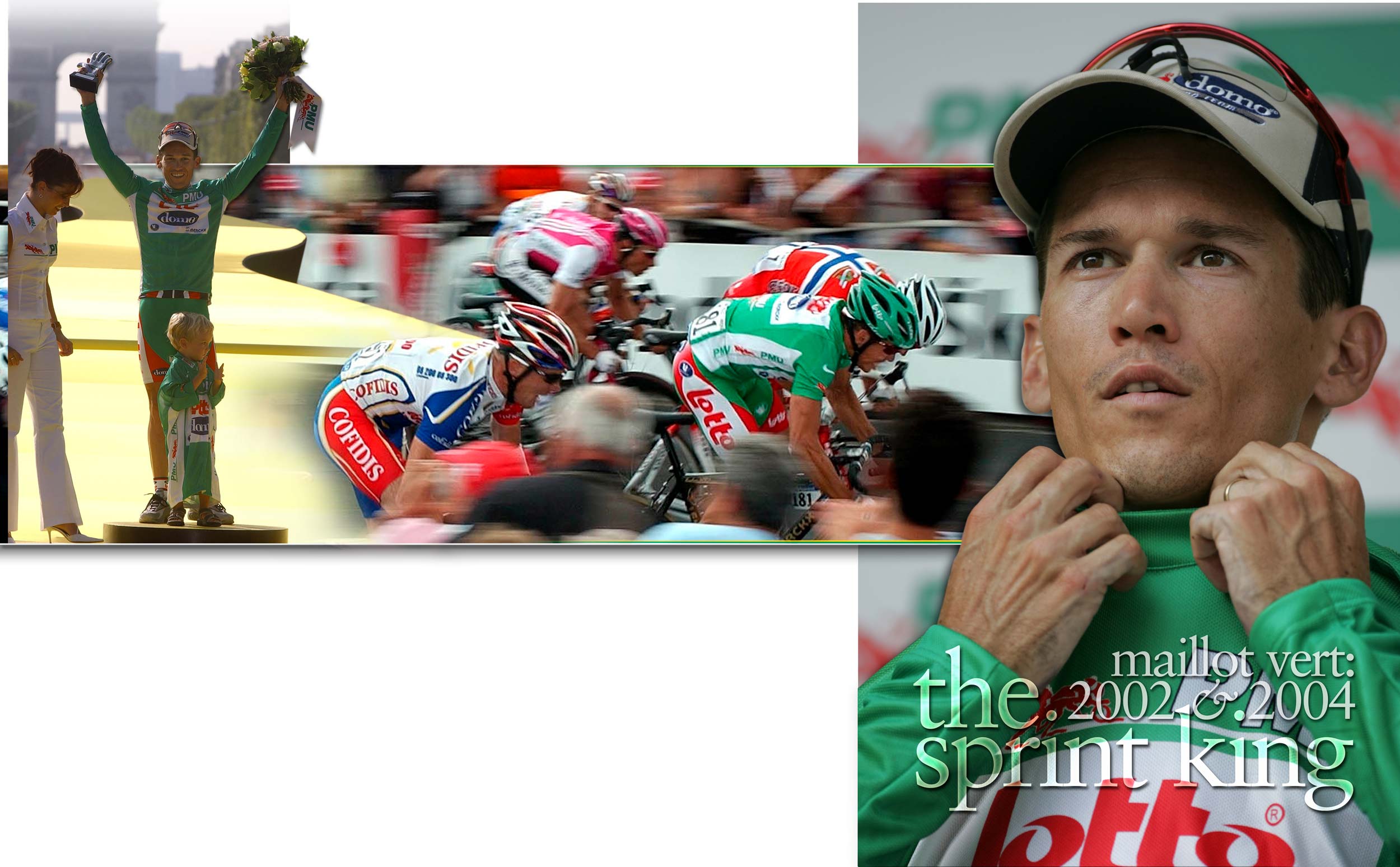 Groenewegen’s return: “It’ll be really tough for him…”

“He has had a tough time over the last few months,” says Robbie McEwen about the Dutch sprinter, Dylan Groenewegen, who returns to racing when the Giro starts on Saturday. “Having said that,” he continues, “nowhere near as tough a time as Fabio Jakobsen.

“But I think it’s fitting now that [Groenewegen] has taken his punishment, he’s had the time out, his ban is expiring, and I think the thing that will placate a lot of people – certainly not everybody, of course, because there are some very strong opinions… that he should not race again and all this sort of stuff – is that it was a racing incident…”

Of course, he’s talking about the crash that involved the two Dutch riders at the Tour of Poland last year. Jakobsen is thankfully racing again and Groenewegen is to be part of the Jumbo-Visma team in the Giro.

“It came out really badly, of course. But what should placate a lot of people is that Fabio Jakobsen has made his return to racing, he’s raced the Tour of Turkey, he finished it, and played a role. That’s really encouraging…

“It’s time that Groenewegen can make his return,” says McEwen. “It’ll be really interesting to see how he goes, slipping straight into the Giro – first race after being out since last September. It’ll be really tough for him but it’ll be a good way to get back into it.

“I’m sort of hoping that he can get through 12 or 14 days of the Giro, build some race condition… [and that] his team then considers taking him to the Tour because, looking at last year, they could really use Groenewegen in the sprint, going head-to-head with Caleb and Sam Bennett and the rest.

“As a viewer and a commentator, that’s what I’d love to see.”

When Jumbo-Visma has Primoz Roglic in the mix, and the yellow jersey in its sights, it seems a little curious that McEwen would nominate a sprint specialist like Groenewegen for a spot in the Dutch team’s line-up at the Tour. But Robbie was a sprinter, and he continues to hold a focus on stage wins, even when there’s a GC win up for grabs.

That’s how it was back in 2007 and 2008 when McEwen raced the Tour on the same team as Cadel Evans, the runner-up on GC both those years. And so, the conversation drifts off to that tangent: sprinters-vs-GC riders on one Grand Tour team.

Again, this is a long interview – so long, in fact, that it has been edited into chapters (with more videos to follow) – and we cover a lot of topics. If you want to hear what a bloke like Robbie McEwen thinks about when he talks about cycling, click play on the YouTube link and settle into the lounge and listen.

He’s got a lot to say and the experience and history in cycling that allows him to be opinionated while also being analytical and interesting.

We’ll hear a lot more of McEwen’s voice in the coming months but consider the interview with RIDE Media a warm-up session, a chance to get some insight into him and his cycling habits in 2021, while also getting some background into what we can expect from the SBS broadcast of the Giro (and Tour).

The interview was a really enjoyable discussion with someone I’ve known since long before he was a pro cyclist. He tells a good story and I hope you agree that he continues to fill the role of Australian cycling ambassador years after he stopped winning bike races.

– For more interviews, check out RIDE Media’s #TalkingCycling playlist on our YouTube channel –