Michael Matthews: “I didn’t know whether to go to the hospital or the finish line”

Third in Milan-Sanremo, the aim was to race Il Lombardia tomorrow… but Michael Matthews explains that the injuries sustained in the finale of last week’s race have forced a change of plans. 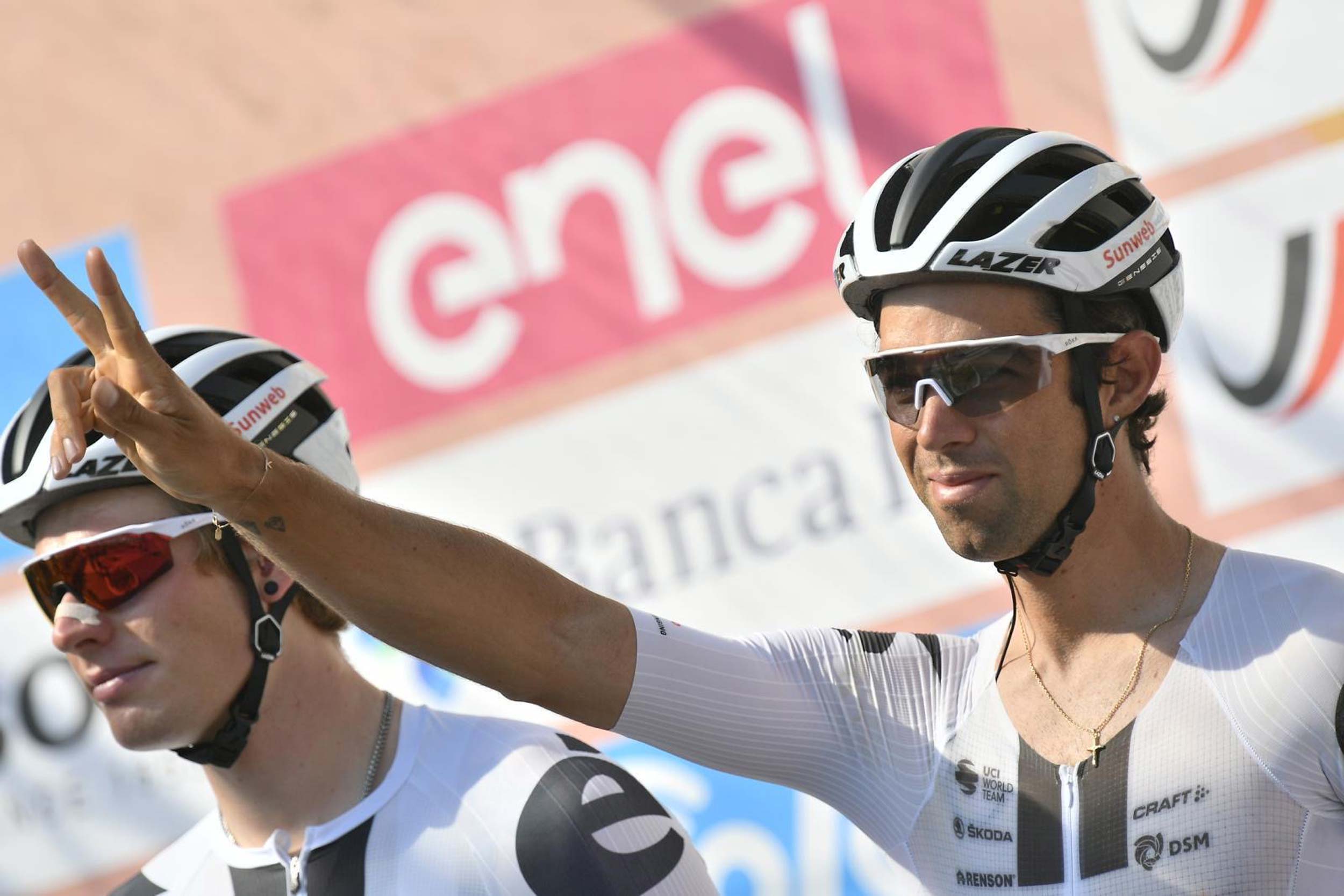 On Saturday 8 August 2020 there was a 305km race. Milan-Sanremo, ‘La Primavera’, usually in spring, it took place in summer on a different route to what we’ve come to know, but the final elements remained: Cipressa, Poggio, descent, sprint.

At the front of the action were Julian Alaphilippe and Wout van Aert. The charismatic, energetic, emphatic star Frenchman and his Belgian equivalent, proving that he has truly come back to form after a dramatic end to his 2019 season.

In the first of cycling’s five Monuments in 2020, van Aert beat Alaphilippe, and in third place was Michael Matthews.

The podium photos are different this year, and for Matthews in more ways than one. He’s been on the podium of Milan-Sanremo before, finishing third in 2015, but this time he was there with a mask on his face and bandage on his hand.

“The training rides that I did leading into the race, the feeling that I had on the climb in that moment… I would have been with those guys and competing for the win,” he told RIDE Media on Friday.

The plan was for Matthews to race #MSR and then Il Lombardia, the second of the Monuments for 2020, on Saturday 15 August. The injury prevents that from happening. He won’t be racing, but he’s already thinking about the schedule that lies ahead, including the Giro d’Italia (3-25 October 2020)… but the worlds – for the moment – aren’t part of his considerations.

We wait to find out if he could be a candidate for leadership of the Australian team, but at the time of our interview no one knows for certain where the championships will be moved to. It’s one topic raised in 15-minute chat early on a Friday morning in Monaco.

Before he set off for a training ride, we pushed the red button… #record

Below is part one of a two-part interview with Michael Matthews.

RIDE Media: I’m talking with Michael Matthews on the eve of Il Lombardia. You came third in a Monument already this year. How are you feeling after scraping yourself up against a stone wall and coming third? And are you ready to try and win this next one?

Michael Matthews: “I’m still a little bit tired from last weekend. I think the whole race – the heat and the recovery from my crash – has definitely put me back a little bit… I was really looking forward to this weekend with Lombardia, but I won’t be able to start.

“I’ve done some tests through the week with my hands. I’ve done some big training rides and it was just not possible to continue doing the rides I was meant to be doing this week. So, to go to Lombardia with one hand on the handlebars, that’s not safe for me and it’s not safe for the guys around me. I made the decision with the team and the team doctor, so I’ll not be able to start.”

RIDE Media: I’m sorry, I didn’t know that. When was that announced?

Michael Matthews: “I think it was late last night.”

RIDE Media: That’s a shame. But can you just talk us through how all that happened? We’ve seen the images, it’s quite dramatic. I’ve seen a lot of blood, but the wound doesn’t look… too bad? Or is it? What happened and what’s the ramification apart from missing a race that you wanted to do?

Michael Matthews: “We got to, I think, the last one kilometre of the Poggio and the guys were attacking on the left side and I thought I’d attack on the right side to try and drag race them and see if I could get away.

“I moved to the right side of the peloton. I was about third wheel at the time and the rider in front of me just turned right for some reason and I was out of the seat, sprinting, at the time. There was a rock wall on the right side that my hand was just like a cheese grater on, along the rock wall.

“I held it up somehow and when I looked down, there was just blood shooting everywhere. My glove was totally destroyed and there was blood all down my leg and on my shoe and on my bike…

“I guess everyone saw the images, but it was… I don’t exactly know how it happened. It was all so fast… once I hit the wall, I was doing 40km/h.

“Over the top of the climb, I didn’t know whether to go to the hospital or to the finish line. So, to then sprint to third… I think it’s definitely an amazing achievement.” 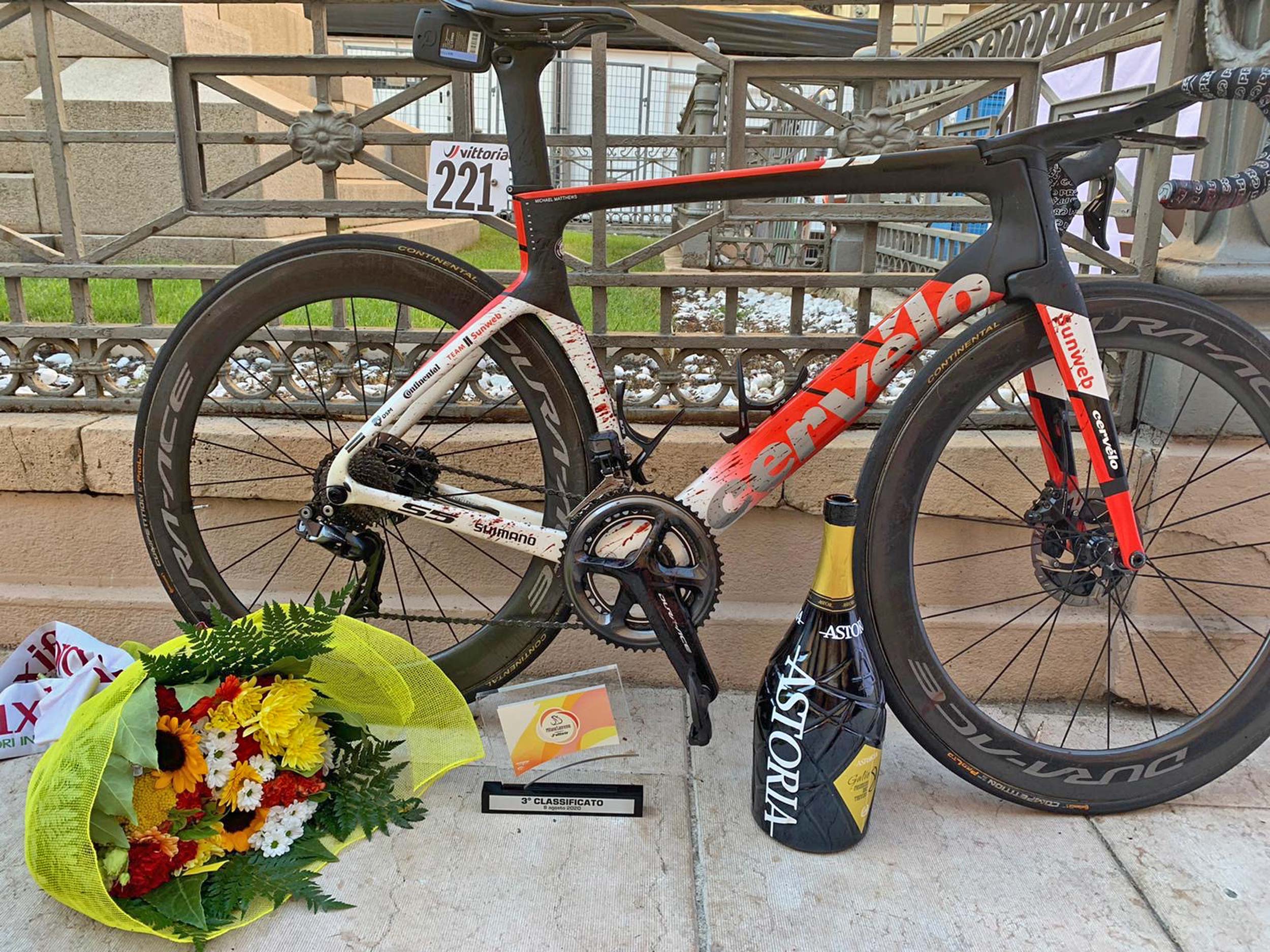 RIDE Media: That’s another podium for you in that race. Just watching the two up front, they’re just incredible athletes like yourself but Wout van Aert and Julian Alaphilippe are putting on an enormous show. If it wasn’t for the incident on the wall, do you think you would have bridged? Or… what would have played out? How were you feeling at that point?

Michael Matthews: “The feeling that I had when I was attacking? I was still totally fresh. That’s why the podium is nice but it’s a little bit of a consolation prize, I feel.

“The training rides that I did leading into the race, the feeling that I had on the climb in that moment… I would have been with those guys and competing for the win.

“I normally wouldn’t say things like this if it wasn’t true, but unfortunately this time it was the case. And I guess it shows… I proved that by sprinting to third with one hand. Obviously, the shape is really good and it’s just sad to not be able to get on that top step – or at least compete to be on that top step and to be with those two guys at the front and at least be sprinting for the win, not third.

“Who knows who would have won out of us, but I would have definitely liked to have tried.”

Michael Matthews: “Looking at the season, I hadn’t raced yet – until Sanremo. I saw those guys had been racing a little bit so I could see how they were after the lockdown. Wout was obviously super impressive with his Strade Bianche win and third in Milano-Turino, which is a pure sprinters’ race.

“He obviously showed amazing climbing form through Strade and sprinting form a few days later. I think he’s the man of the year this year, obviously. He’s proved that already. It’s going to definitely be hard to beat him this year… anyone, in any sort of category. He can also time trial. He’s definitely a superstar.

“Julian obviously had bad luck in Strade. I think he’s mentioned he’s had about six flat tyres. As you know, in a race like that you can’t have any bad luck otherwise you’re not in the race anymore.

“It was a bit hard to see exactly how he was going into Milan-Sanremo but you can never count him out. He’s a little rocket. You always have him on your mind – that he’s going to do something, you just never know what.

“That’s what always makes Julian so interesting. You never really know where he’s going to go or what he’s going to do… or if he’s going to be good in a sprint. I think he was also super impressive almost backing up his win from last year in Milan-Sanremo.

“It will be interesting to see how those guys go through Dauphiné now and then the Tour de France and to see what they can achieve in those races.”