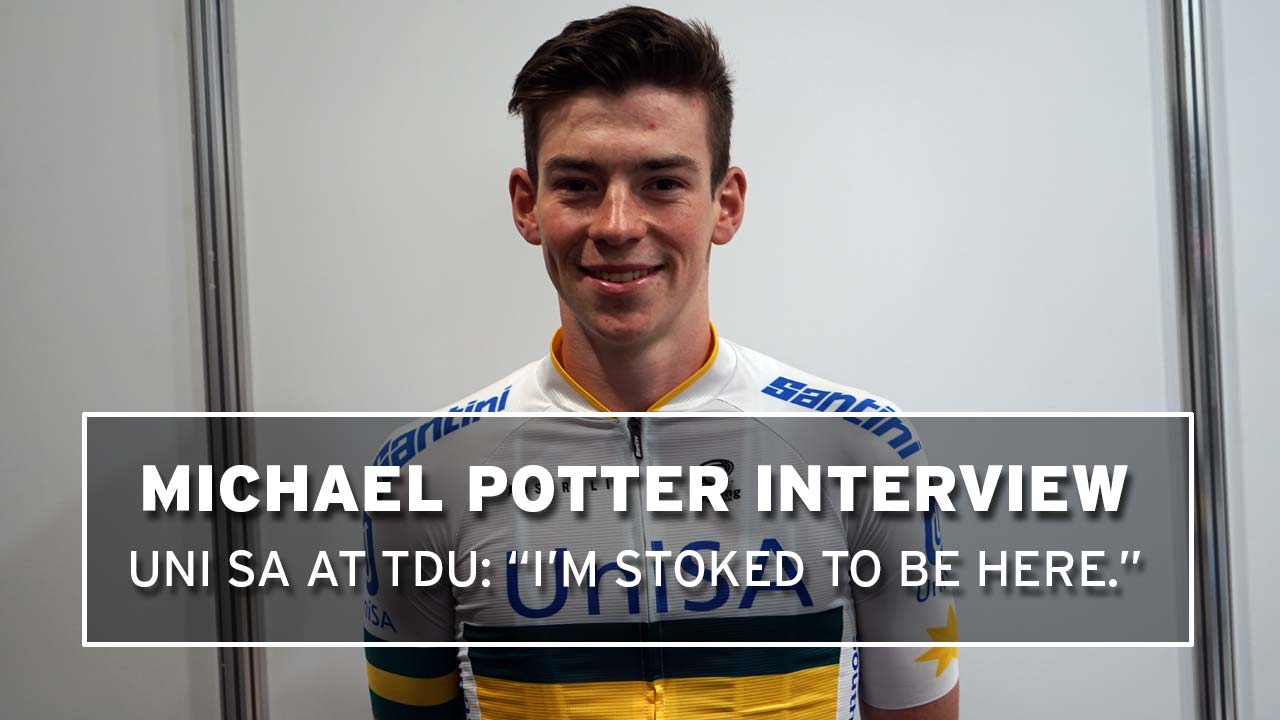 Michael Potter at UniSA for TDU: “I’m stoked to be here”

A lot of Australian cycling followers got an introduction to Michael Potter in recent days. He earned the final place on the UniSA team at the Santos Tour Down Under. RIDE Media caught up with the 21-year-old briefly before the team presentation in Adelaide…

He is a talented rider from the northern suburbs of Sydney and, by his own estimation, Michael Potter is the youngest rider in the opening round of the 2019 WorldTour. He recently turned 21 and will race with the UniSA team alongside Chris Harper, Jason Lea, Dylan Sunderland, Ayden Toovey, Neil van der Ploeg, and under-23 national champion Nick White.

He was – rather controversially – the rider of choice for Australian high performance director, Simon Jones, for the team that provides an opportunity for young riders to get a taste of top-level racing as part of a composite team. But, many have asked him recent days, who is he?

Those who have followed the Australian road and MTB scene in recent years are familiar with his talents. Like the new elite national champion, Michael Freiberg, Potter is a member of the Australian Cycling Academy team (known in 2019 as Pro Racing Sunshine Coast… at least that’s what it says on the front of the jersey).

Potter is the silver medallist in the under-23 road race last Saturday. He was told he was in with a chance of racing the Tour Down Under but, on Sunday as he watched Freiberg cross the line for an excellent win in the elite category, he was said to have uttered, “Well, there goes my ride at the TDU…”

Despite that appraisal, he still made the selection and will get the chance to show his form on the international stage in the coming days. 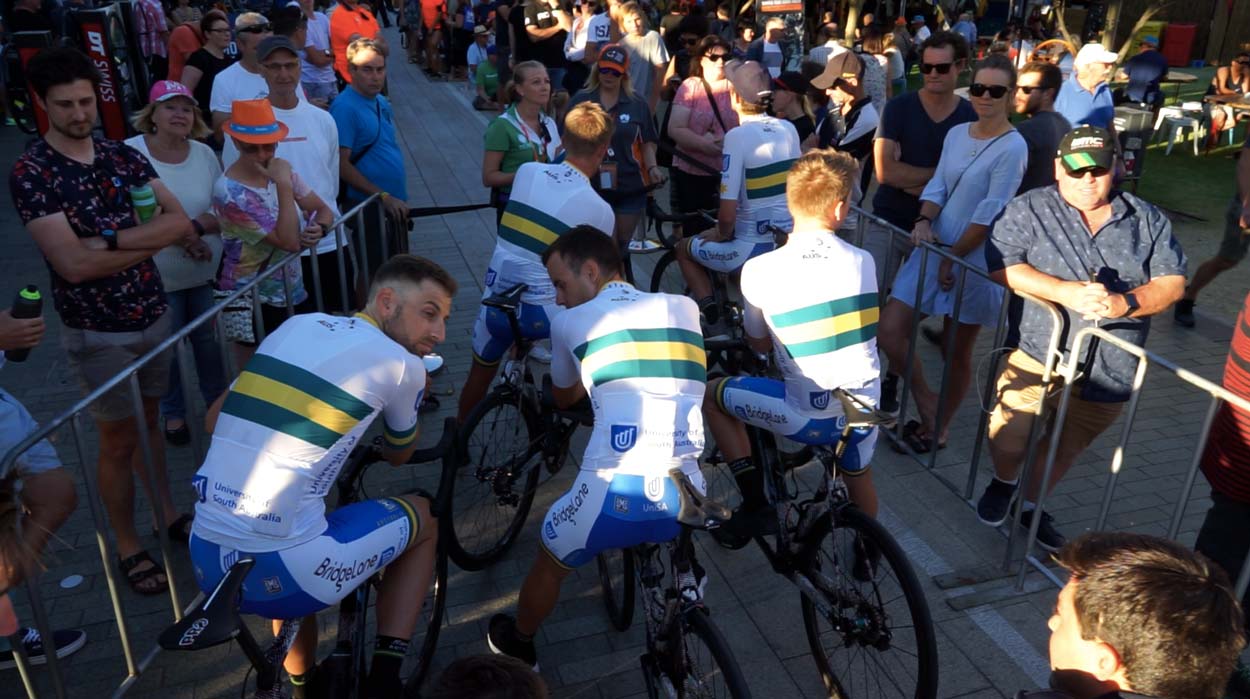 RIDE: It’s a couple of days before the Tour Down Under and I’m talking with Michael Potter who is one of the riders from the UniSA team. He got second in the nationals in the under-23 [road race]… he’s in good form and there’s been quite a lot of attention on him in these last few days, and we’ll soon get to see why that hype surrounds him.

Michael Potter: “Yeah, it’s been a big week after the nationals and I’m really happy to be here to see what can happen.

“It’s the biggest race in Australia and I’m stoked to be here.”

Are you the youngest in the race?

“I’m going to say yes. I’m going assume so… I’ll have to have a look, but probably.”

Give us a little potted history of how you came to cycling.

“So, I was doing mountain biking and road racing at the same time and I was racing overseas for a team called ‘Trek Racing Australia’. I’d been doing that for three or four years, over in Europe, racing World Cups and that sort of thing.

“Then, in the middle of 2017, Ben Kersten from what is now ACA [Australian Cycling Academy] picked me up for his team and it all started from there.

“I spent the whole of last year with the team. We had some really good results over in Asia and even here, domestically.

“I’ve stayed on with the team and I’m hoping for another big year with them.”

Is that the end of mountain biking for you?

“Yeah. I did a race called ‘Port to Port’, which is May and that’s the last time I touched my mountain bike and that was the first time I touched it since the world championships about seven or eight months beforehand. 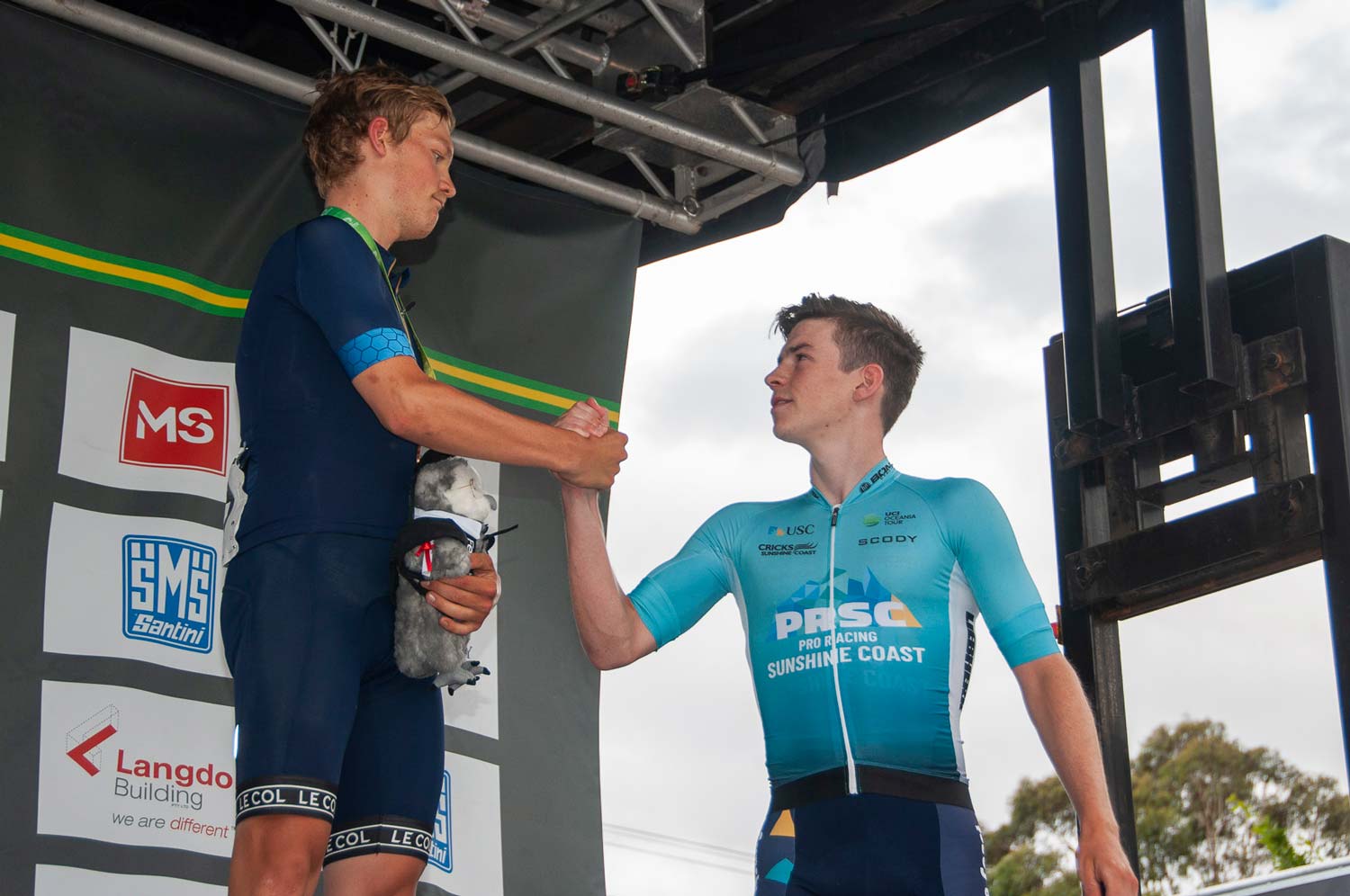 Sam Jenner and Michael Potter (above) on the podium for the under-23 road race at the nationals.

As someone who is finding their joy from cycling in mountain biking – which is me – I can understand that you’d be tempted to go back but it’s not possible to combined the two…?

“I try not to crash, obviously, but sometimes that’s a bit out of my hands.

“Obviously, when there’s a bit of downtime and there’s a bit of a break between races, you can go out and muck around with friends and go to the dirt jumps. But it’s not worth the risk. I wish I could do more.”

Did you come from BMX before mountain biking?

“No. It was kinda more: road, mountain biking, and back to road.

“It was more road racing at club level and riding with my dad and that kind of thing and then I went for the mountain bike option – then came back.”

You’re from Hornsby (in the north of Sydney) so you get to go ride around Berowra and all around. What’s your stomping ground?

“My favourite ride is probably the Galston Gorge/Bobbin Head loop. I did that when I was nine years old, the first time, with my dad… it’s only about 45km but that was the biggest ride I’d done at that age and it’s still my favourite ride to do. It’s just nice scenery.”

What are your expectations while you’re here (at the Tour Down Under)? Your team has got a good leader in Chris Harper, everyone says he’s flying. Are you anxious about riding for him?

“No, no. He’s definitely flying. I mean, if you have a look at last week’s race, at the national championships… I mean, pfff! He was one of the stronger dudes, obviously, but he is going really well.

“Personally, I’d like to give it a crack and see where I can sit in the main field… and also just try and put my name out there as well and just try to get recognised, to an extent. That’ll be the goal.”

We saw, last year, Scott Bowden get sent out to fry day after day. You’re not going to be given that responsibility are you?

“Oh, that’s up to ACJ (Andrew Christie-Johnson) and Tom Petty, but I don’t think so, no.”

“Yeah, GC. And also hopefully we can have a crack on a few of the climbs as well.

“I’ve still got to look at the book but there’ll probably be a few days we just target specifically and just see what can happen.”

We wish you all the best and thanks for having a quick chat. 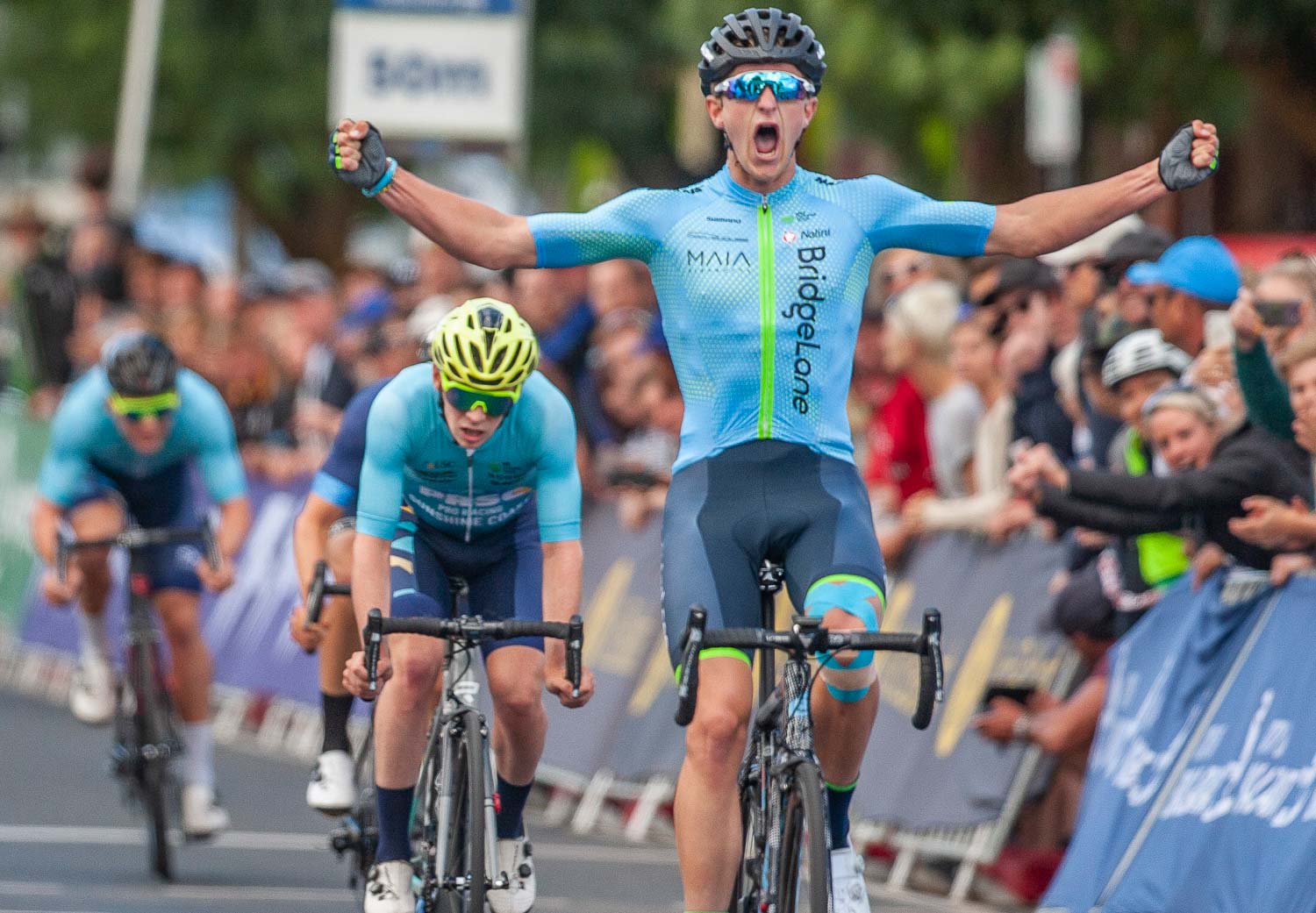 – RIDE Media at the Tour Down Under: presented by FE Sports –