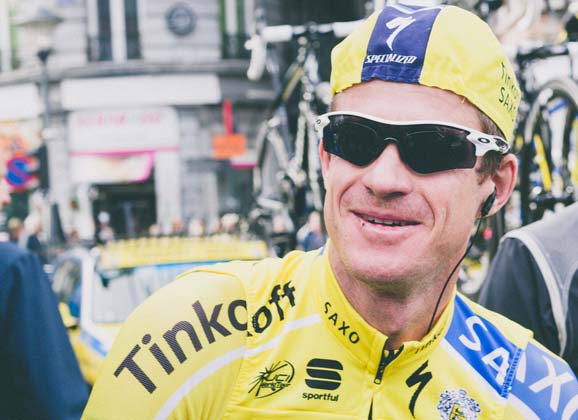 Last week in an exclusive interview with Mick Rogers many topics were raised. He had just returned to his home in Switzerland after his first race since being cleared to compete again by the UCI. One early question was: Do you know if you’re going to the Giro?

“Well, hopefully yes,” he said on 1 May. “The Giro. That’s the plan, I think, at the moment. As far as I know it’s all going ahead. Certainly it would be good if I could get through the whole Giro. And I think that will work out really well for the Tour. I’ll obviously just have to take it that little bit easy in the Giro to kind of distribute my fitness over the whole three weeks but I’m really looking forward to that, for sure.”

Teams are being announced daily but Tinkoff-Saxo is yet to reveal it’s line-up. It’s not certain (at the time of posting) if Rogers is in the selection for the race that begins in Belfast on Saturday.

We will be keeping in touch with Rogers in the coming months and continue to follow his career, as we’ve done since the first issue of RIDE, published in July 1998. A lot has happened in cycling during that time and Rogers has been a big factor in many headline events over the years. He has agreed to share insight from his career and observations about the sport and we will be publishing an extensive interview with him in the up-coming issue, RIDE #64 (due on sale end of May). While we wait for the confirmation of the line-up for the Giro, here is a small part of what is a most entertaining discussion… 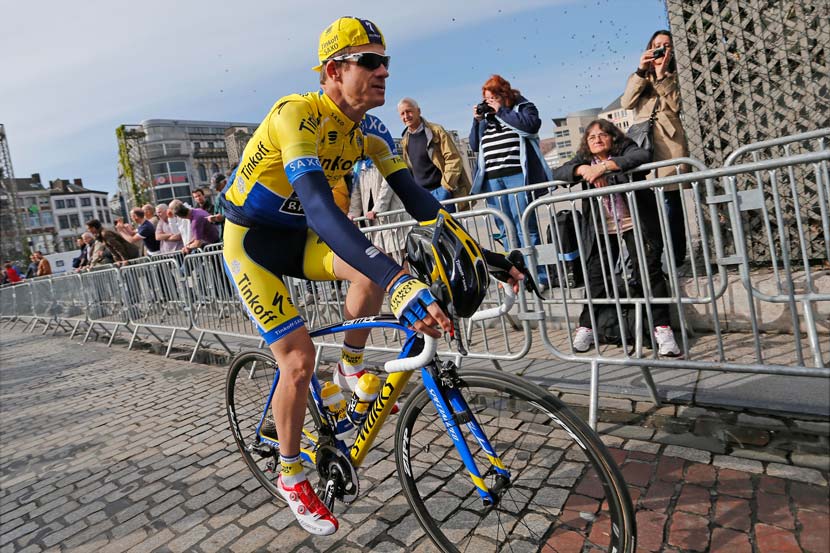 Michael Rogers, about to race for the first time in 2014… Liège-Bastogne-Liège.
Photo: Yuzuru Sunada

Michael Rogers: “I’ll be on the bike and I’ll be just cruising along so I can talk when I’m riding. That’s cool.”

That’s how the discussion began. Rogers was putting on his cycling kit and getting ready to go training. We were talking on the phone. He was in Mendrisio. I was in Sydney. He had his job to do and I had mine. He wanted to ride his bike, I wanted to talk about him riding his bike. It seemed a logical solution. Talk and ride. But I asked: is it noisy? “Oh, I’ve got my headphones. It should be okay… does that work for you?”

Aaaah, can you talk for 10 minutes now?*

That’s how it started. He’s in quotes. The questions are in italics.

*Note: that was the original plan. It dragged on for a lot longer than that… 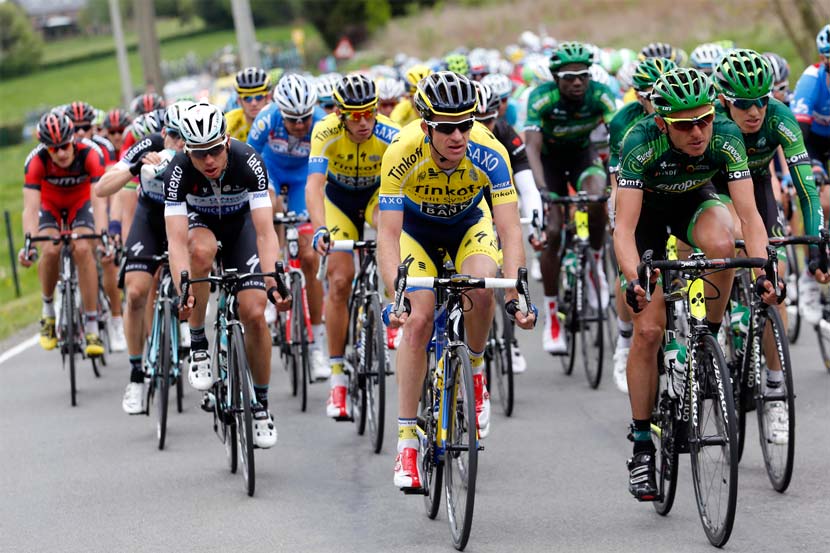 Rogers ahead of Kreuziger in LBL.
Photo: Yuzuru Sunada

Hey, you looked great in Liège.

“Yeah, yeah. It was good. It was… ah, I had a great time. I got to the bottom of the… I worked pretty hard actually. Kreuziger crashed just before the Stockeau – you know where we all crashed a couple of years ago at the Tour, that really slippery bit where the whole bunch went down. So, he crashed just before that and I spent a lot of energy to get back and we got back at the bottom there.

“But anyway, it’s all good.

“I exploded on Redoute but as expect after 220k of racing I was pretty happy with that.”

[The race] was fun to watch because I didn’t even know you were riding. I literally turned on the broadcast and your head flashed past in this bunch shot – or a group shot – and I was like, ‘Oh, that’s Mick!’

“Yeah, yep. Straight back in the deep end, that’s for sure.”

Straight up. So when did you know you were riding Liège?

“When was it? It was Sunday, so I flew up… they took the decision Thursday. I flew up on Friday evening. And then I had the day with the team on Saturday. We went up and went for a cruise… just around Spa there on the Saturday. And then yeah…”

How far did you do on the Saturday?

Did it feel… normal? Was it a bit surreal?

“I think it’s the hardest one-day race of the year, isn’t it? Or one of them… between that and, I think, Lombardia – they’re the hardest two. But to come back into that was certainly good. But it was hard you know. I come into the Redoute there wasn’t a muscle in my body that wasn’t cramping.”

Okay. Because you kept your Race Face on. For a while I was thinking, ‘Hang on, he looks like he’s enjoying this a bit too much. He might go with it all the way.

“I was enjoying it. I won’t contest that but my body – especially from 200 to 220, for the last kilometres I was there, my body was just screaming.

“But you know, those are the work-outs I need to get me in shape…

“It was certainly nice to be back in the field and back racing.” 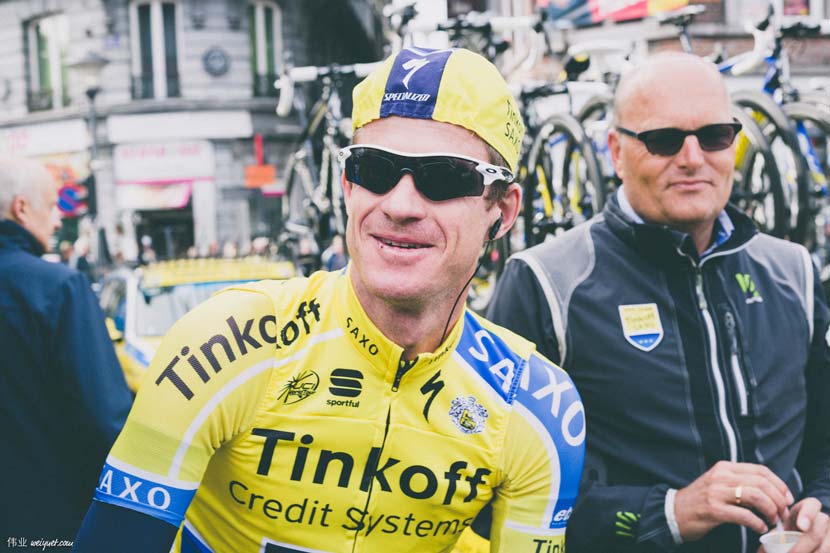 I’ve got a great shot from Wei Yuet Wong of you and Bjarne Riis just behind before the start. And he looks pretty cheshire as he always does. What was the vibe like with him?

“The team was really happy to have me back. Amongst all the riders… I can’t say how many riders came up to me before the start and [saying] they were really happy that I’m back. So that was certainly encouraging, to have the majority of the riders in the field come and say, ‘You know, listen I’m really happy about the outcome of this, and the right decision was taken.”

Do you feel like you were… ah, ‘special’ that day?

“No, not really. I mean, first and foremost, I was just rapt to be back and doing what I love. Ever since I was seven years old… I mean you know my story but it’s just what I do. And for me that was a victory in itself – just to be back doing what I love and being with my team-mates.” 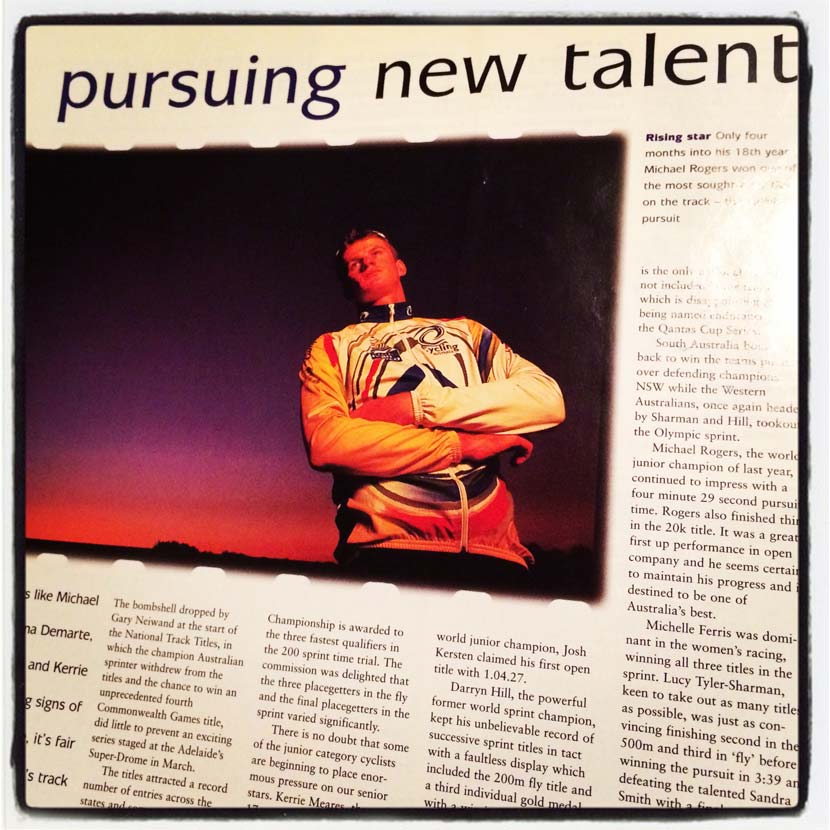 Mick Rogers as he appeared in the first issue of RIDE Cycling Review, published in July 1998.
RIDE #01.