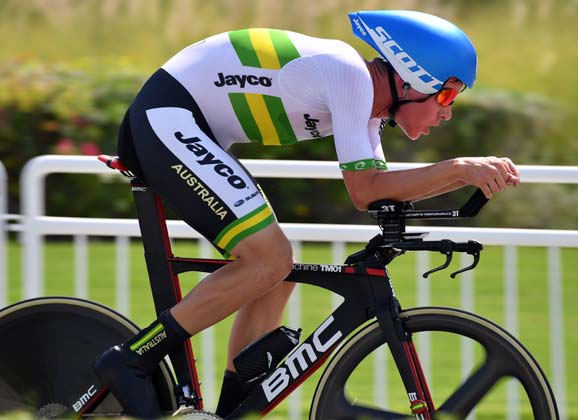 Miles Scotson off to the WorldTour with BMC

It was announced earlier today that there is another young star from Australian cycling set to join the WorldTour in 2017. Miles Scotson is one of two medallists from the Australian team at the recent world championships in Doha. Next year he joins BMC Racing… 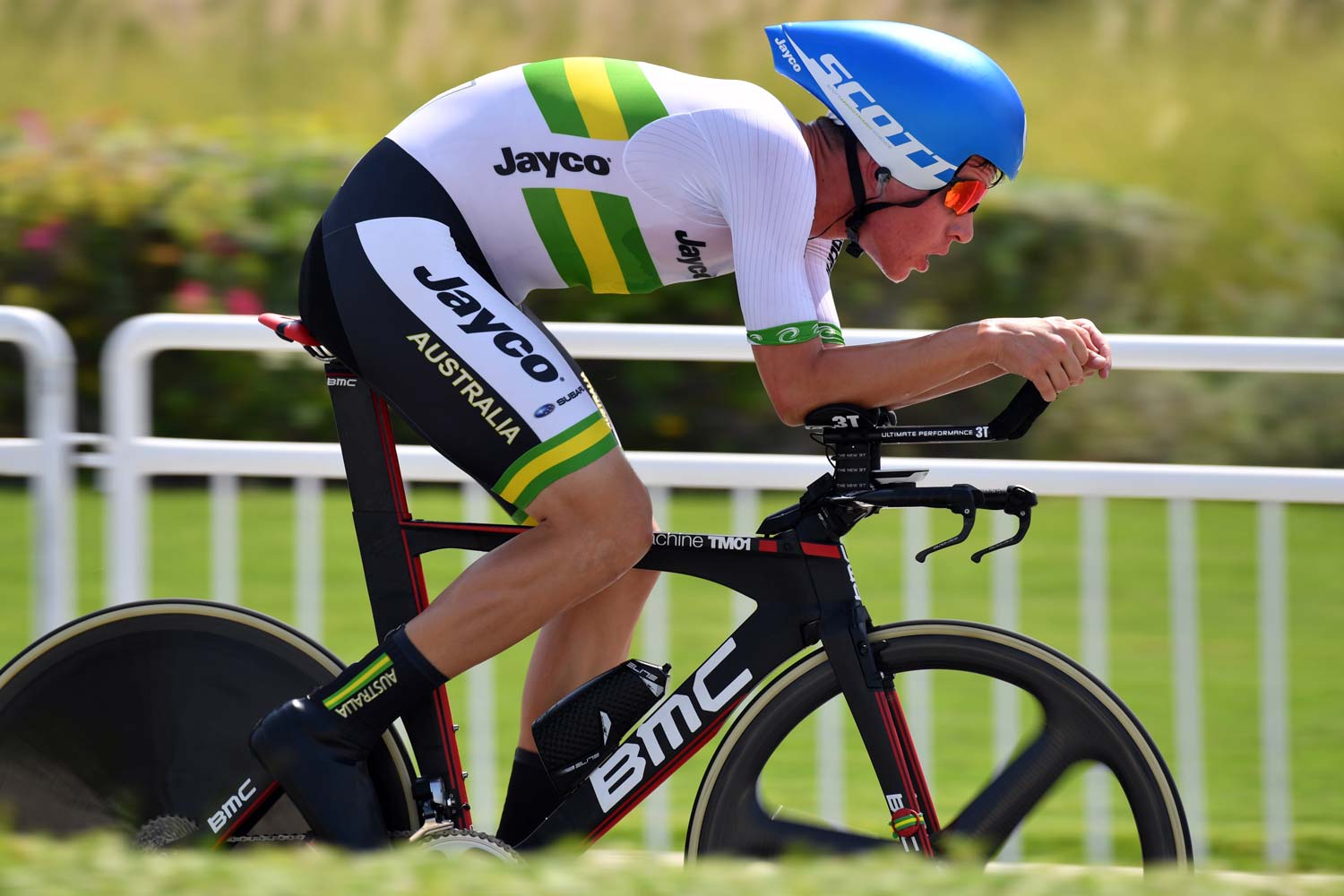 His bike for the world championships offered a fairly strong hint that BMC was interested in Miles Scotson. The offer from the US team wasn’t the only one for 2017 but he held out to get the pro contract he wanted and BMC Racing was his first choice.
Photo: Graham Watson

Australian cyclist Miles Scotson has jumped straight from the road world championships under-23 podium and into BMC kit. Or, so it seems.

“I’ll be with BMC for the next two years for 2017, 2018,” said the older of the two Scotson brothers who represented Australia in the under-23 time trial at the worlds in Doha. “It’s an exciting opportunity and that was a big goal for this year, to go to a WorldTour team. And if I could pick a team, it was going to be BMC.

“It wasn’t easy getting on board but it’s a good opportunity now.”

Fresh from his third place in the time trial in Doha, the 22-year-old has now signed a two-year deal with the US-registered WorldTour outfit.

The young track and road star began 2016 on the podium at the national road championships, finishing second in the time trial and third in the road race. He moved up to the top step in March, with a gold medal in the team pursuit at the London track world championships.

After a stint in Rio as Olympic team pursuit reserve, Scotson raced back on the road with Wanty Groupe Gobert as a stagiaire, his performances there enough to solidify his place at BMC.

Although there are lingering aspirations for Olympic events on the track, he is about to embark on a road career with a team that has nurtured two stars of Australian cycling since it became part of cycling’s big league. Both Cadel Evans and Rohan Dennis have enjoyed considerable success racing with the team owned by Swiss entrepreneur Andy Rihs, a big fan of Australian cyclists.

“I think it’s going to be too hard with the track and I’ll probably have the year off,” said Scotson in response to a query about his ambitions on the velodrome.

“Still going to keep in touch with the group and stuff is my plan at the moment because you know I think it’s good to have diversity.” 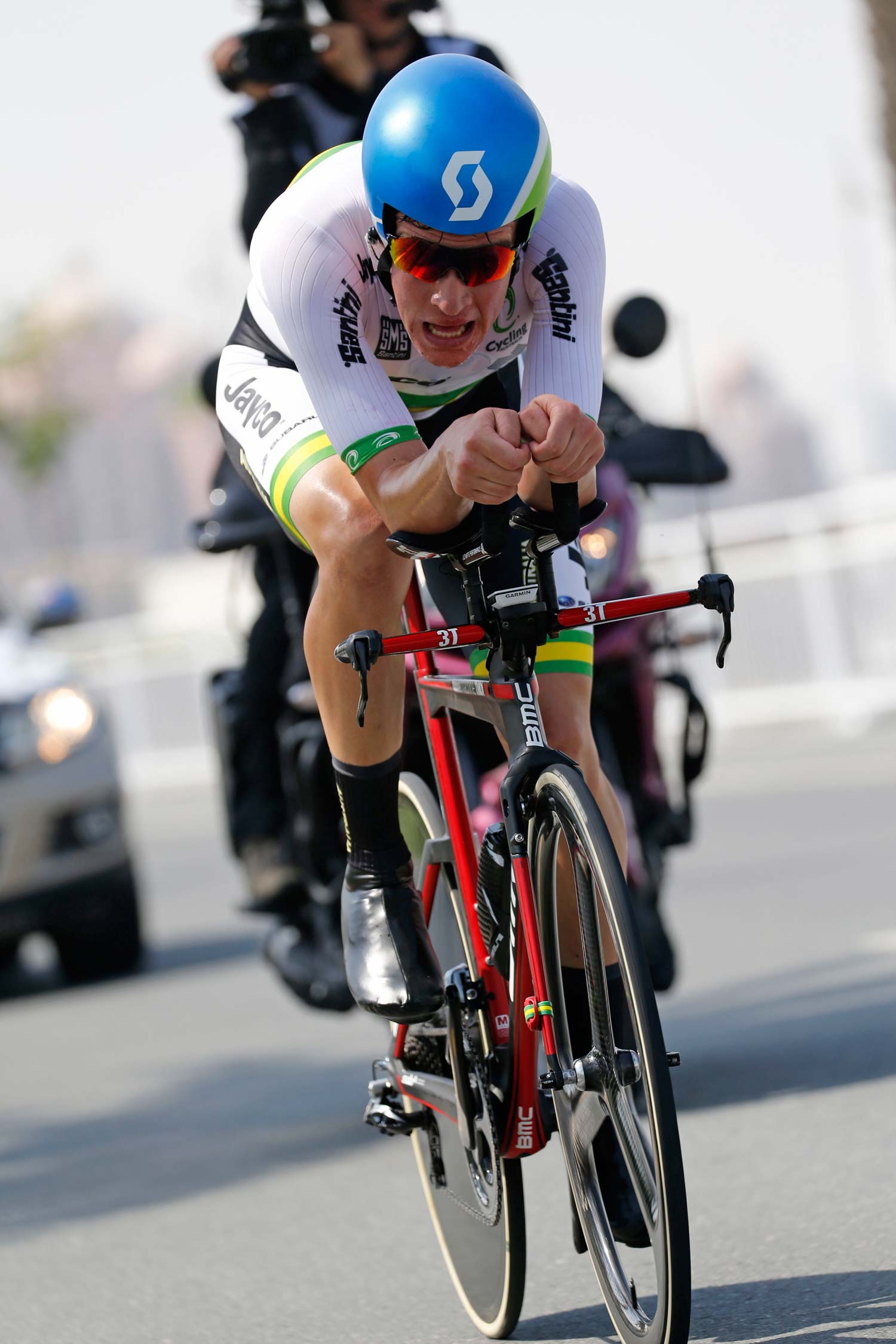 Miles Scotson was third in the TT at the worlds in 2016. His brother, Callum, finished 10th.
Photo: Yuzuru Sunada

“I was introduced to (BMC Sporting Manager ) Allan (Peiper) last season. Allan’s one of those guys – although he works for BMC, he still looked out for me this year.

“He helped me and it was not so much to go to BMC. He saw I hadn’t done a lot of racing. He put me in the right direction and I got good enough results and ended up on his team.”

As a team pursuit world champion, the expectation is naturally for Scotson to perform strongly in time trials, although his 2017 calendar is still unconfirmed.

“On the training camp in December they’ll probably give me a race calendar and set some targets for me. I would think with Allan there who oversees the race calendar for everyone, I should be fairly well looked after, I hope, and just ease me into it.

“I think I will be doing the Belgium Classics. Whether it will be a Flanders or a Roubaix I’m not sure. That would probably be my early season goal.

“I’ll race Tour Down Under as well. I think apart from that maybe the team time trial – obviously BMC take that very seriously – for the World Championships next year. That would probably be an area they’d be expecting me to perform.

Scotson spoke further about not being ready just yet to say goodbye to the velodrome.

“There’ll be a lot of hard decisions I’m going to have to make but I don’t think I can walk away from the track with being a reserve rider in Rio. I think I have more to offer. But it might just be something like at the end of a career I’ll think ‘why didn’t I go back and try and go for an Olympic gold medal?’ So in the back of my mind I’ll focus on (the road) for the next year, and for the next four years but if I can make it to Tokyo and keep doing the road stuff and riding at a high level, I’d love to combine the two.”

“I talked to him (Rohan) a little bit in Qatar, I said to him the team may be interested. The way he’s been time trialling the last two years, he’s probably going to be a good guy to actually learn from a little bit and follow his footsteps.”

The team has a Swiss owner, an US license, and a cosmopolitan case of riders. Miles Scotson is the latest of a series of Aussies to progress their cycling careers at BMC Racing and the GM of the squad, Jim Ochowicz is excited about the prospect of what the versatile 22-year-old can offer.

“Miles in an excellent time trialist and this year won the individual time trial at the Olympia’s Tour, before going on to win the bronze medal in the under-23 time trial at the UCI world road championships in Doha,” said Ochowicz. “With the emphasis we place on our individual and team time trials it’s exciting to add a young talent like Miles to our ranks.”