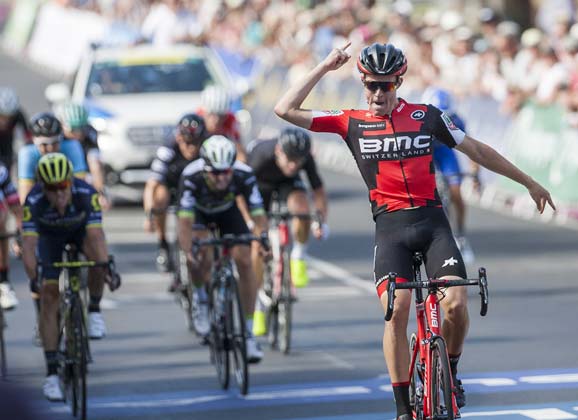 It was a result few expected but watch the replays and you’ll be reminded of how professional Miles Scotson was during his first race with the BMC Racing Team. Just 10 days shy of his 23rd birthday, the young man from South Australia timed his attack in the finale to perfection.

He would go on to a fine solo win ahead of two seasoned veterans of the pro peloton: Simon Gerrans and Nathan Haas.

RIDE caught up with Scotson a little less than a day after his victory in Buninyong, Victoria. 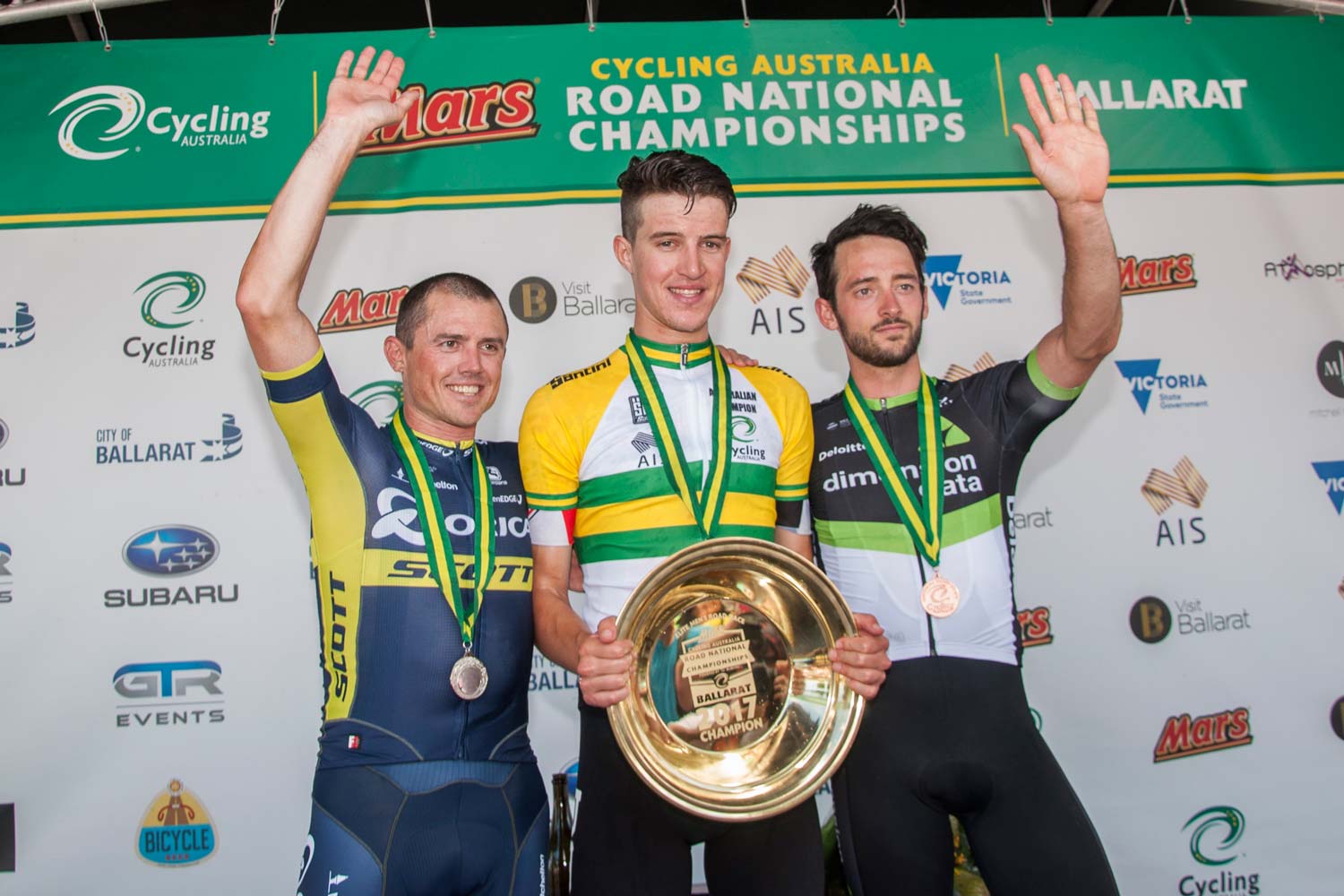 To listen to the interview click the SoundCloud file and/or read the transcript below.

Q&A with Miles Scotson – after the nationals

RIDE: It’s the day after the nationals and I’m talking with Miles Scotson, the new Australian champion. Congratulations on what was a stunning ride. It was a compelling race from beginning to end but the only time we saw you at the front was when it mattered most.

Miles Scotson: “Yeah, I suppose there was a couple of times to show myself in the race – which was early when I tried to get in the early break… kind of like my goal for the day because I wasn’t sure how I was going to cope at the pointy end.

“The only message I got from the team came from Allan [Peiper] and it went to one of our soigneurs. He said, ‘Don’t let a big break go!’

“There were two GreenEdge [Orica-Scott] guys gone and most of the teams represented. I rode across to that but when I got there it seemed like they didn’t want to work so I kind of hid most of the day.

“There was a couple of times when I pushed the pace on the fifth and fourth time up the climb – really hard on the front – but then after that I just kind of hid in that pack, really.

“Even in the last two laps, I tried not to get too excited on the climb. [I] tried to really follow the front few guys, just tried to be there or around the mark. I just kind of hid and played it cool.” 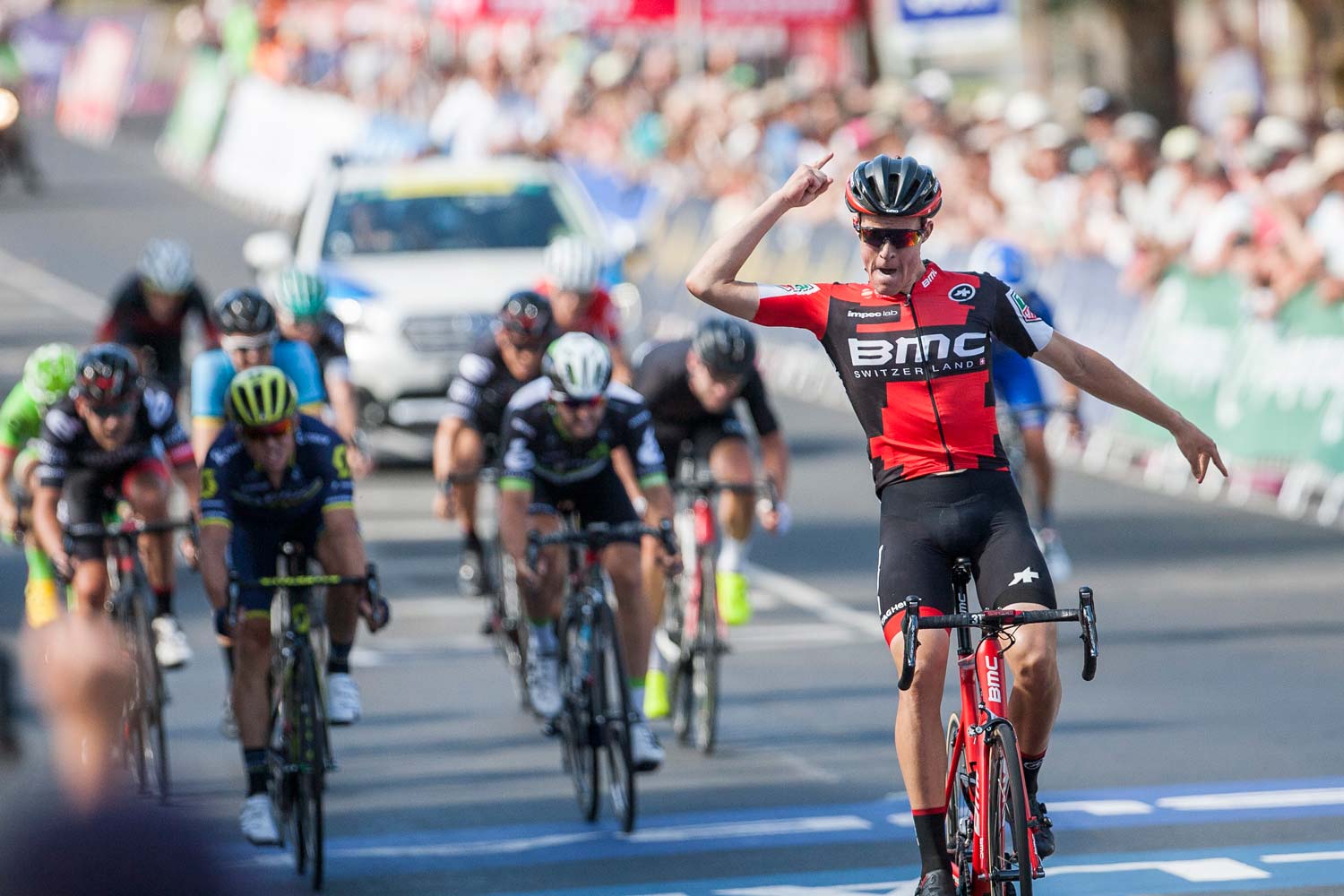 When you took your runner – and you sped past everyone with, let’s say, two and a half kilometres to go – it was, I guess, the shock that did it. Nathan Haas couldn’t chase because he’d have nothing left for the sprint. Luke Durbridge was worn out. ‘Gerro’ was waiting for Luke to do something…

You timed it perfectly. Did you sort of anticipate it that way or did you just think, ‘Well, I feel good I’m in the right spot – I’m going to hit it’?

“I didn’t even worry about something going off ahead.

“I just sat there. Waited, waited. And then I was actually going to take a run going into the last corner and jump going straight out of it.

“I left a bit of a gap and then I think it was Cameron Meyer and someone else were rejoining – they’d been dropped off on the climb – and they came underneath me which kind of made me have to wait a little bit and go later, which worked out perfectly.

“I could see ‘Durbo’ was on the front just trying to ride a pace to keep it all together but luckily I had good legs and you could see it was a single line – like, it took me quite a while to get around that group.

“But I kind of wound the gear out and once I got past ’em I think I was holding at least 10km/h quicker and that just opened up that advantage on the descent just from the speed I gained for it.” 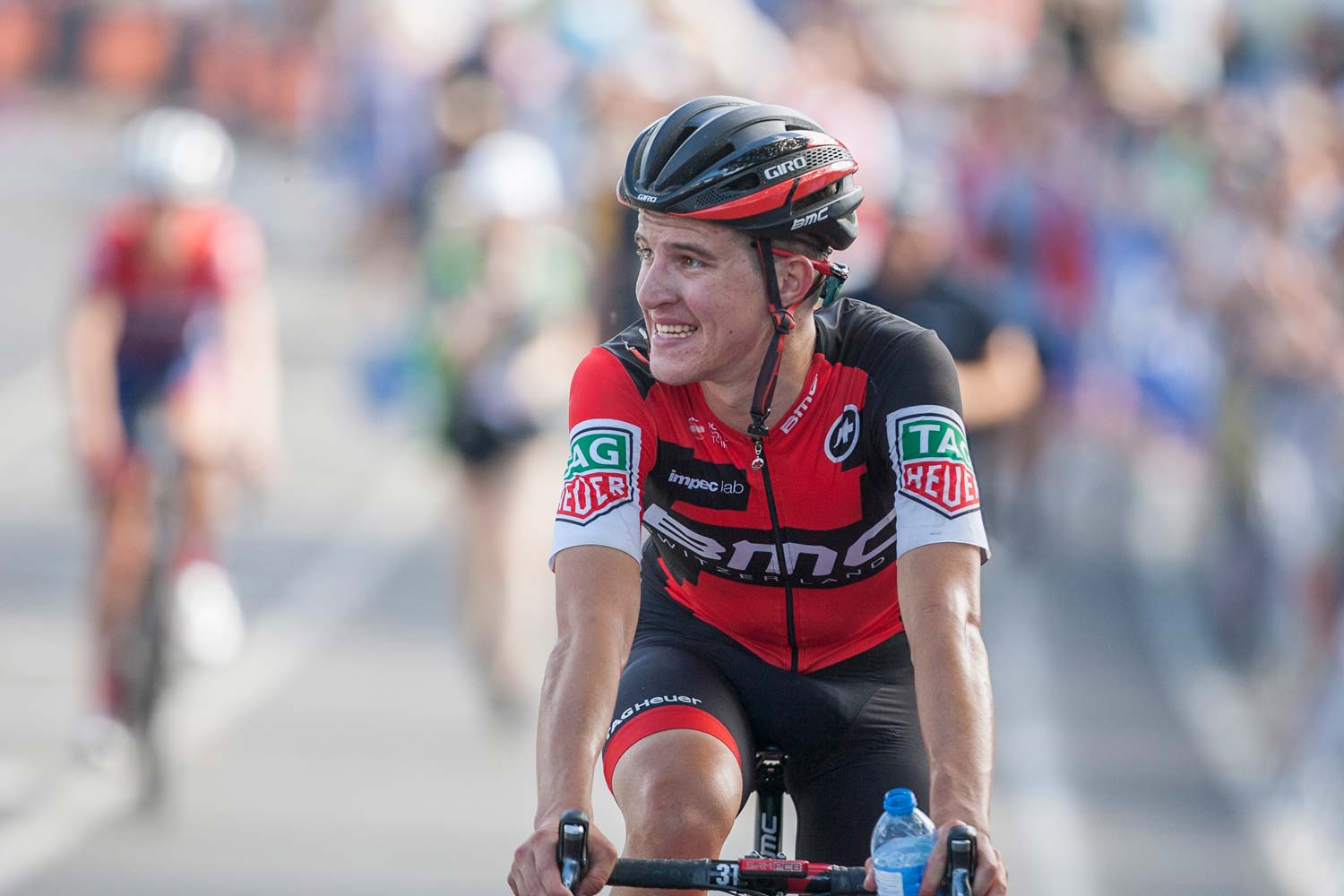 At the end of a long race, I don’t know if the power is going to be huge – but what were your numbers when you did your attack? Do you know what output you had?

“It’s a funny thing because I went to charge my SRM the night before and it mustn’t have charged properly and went flat maybe 40 or 50km into the race.

“I had no power [information] most of the day. My coach doesn’t actually know that yet but I’m sure he’s going to be a little bit upset.

“I know it was enough power to hold off the group so… it’s all good at the moment.”

Okay. We’ll let the demons electronics bother you and your coach later on but you understand what 500 watts feels like. Were you up there or over? How were you going?

“Oh, an effort like that before the hill – and to get around – it was probably a 30 or 40 second effort. I would say, at that period, I would have been pushing 800 watts before that descent.

“Then, all I know is: at the bottom of the descent the cadence was pretty high and from thereon I think the power was just dropping and dropping as I got to the line but I just had the speed.

“It was really just a super hard 30-second effort which, even on the descent when I wasn’t pedalling, I was feeling that 30 seconds because you’re doing it at the end of 18 hill repeats.

“I was dying coming up to the line but I had the speed on and it’s really not that far from the bottom of that descent to the line, especially being a track rider. I can ride at ‘kilo’/pursuit pace and I can hold a high power for one or two minutes.” 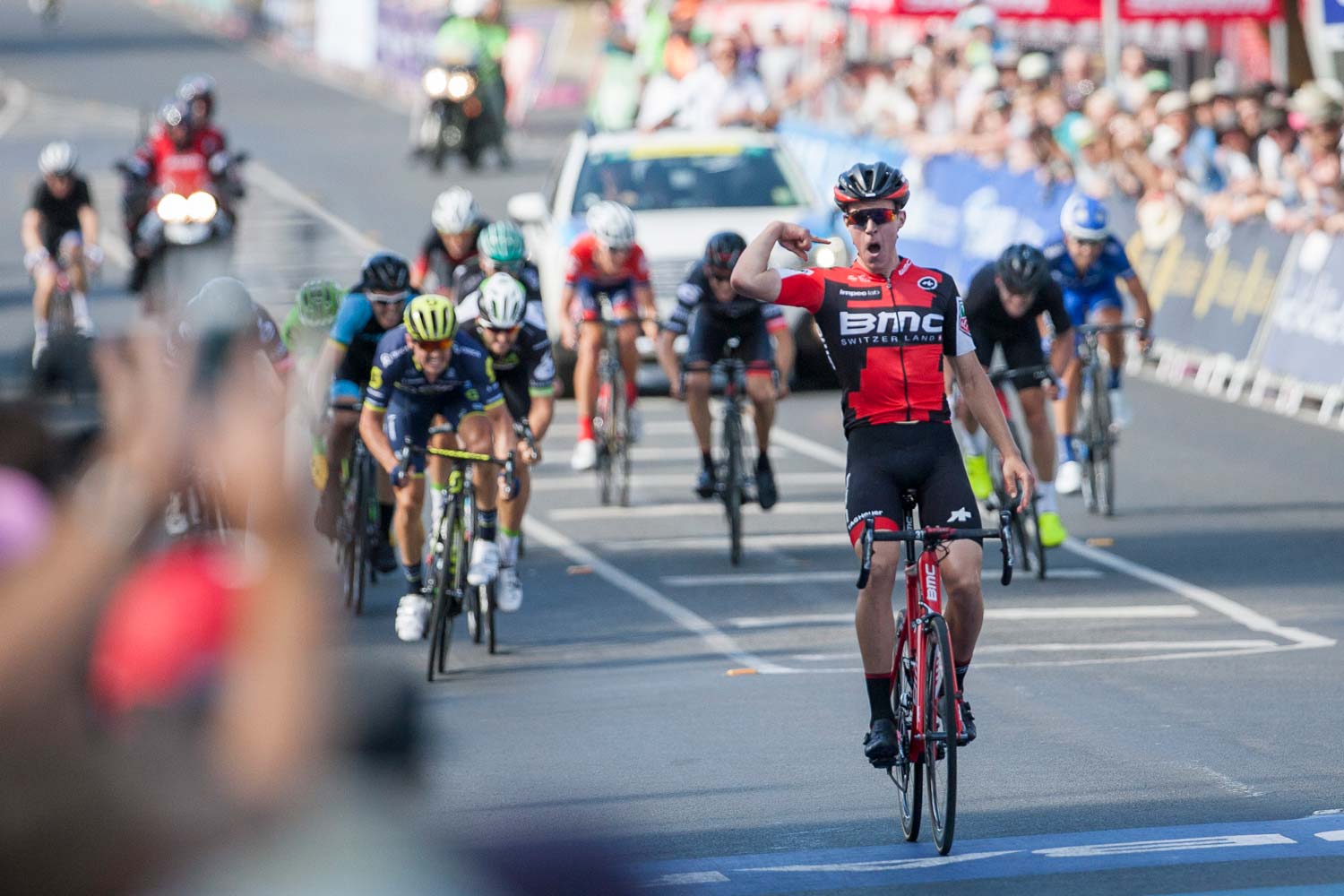 It made for compelling television. It was great. If it was, let’s say, 200 metres longer would you have won?

“Two hundred metres longer? Ah, yeah I reckon. Maybe any further than that, probably not.

“I probably would have got reeled back in but I could see back by looking over the shoulder and then I had a bit of time to sit up and celebrate… 200 metres would be pushing it but I think I probably still would have hung on.

“Obviously I re-watched the video a couple of times and it wasn’t even really like a hesitation that let me get the gap; I mean Durbo, as soon as I went, was chasing as hard as he could…

“On the descent there’s not too much anyone can do because you’re going over 70km/h, you can’t really pedal [much faster] and then you saw Cameron Meyer hit out super early – 700 metres to go – to try and close it. And then I saw Jay [McCarthy] went over the top of that. It was a kind of constant sprint between the guys behind…

“I think that the only thing that could have changed it really is maybe someone jumping on as soon as I went but I think everyone was kinda… didn’t expect me to go there.”

I reckon there’d be a few happy people in your new team. Who from the team did you get a call from?

“I spoke to Allan [Peiper] over different time zones and my coach Marco Pinotti and they were super happy. The media people in the team as well.

“And I’ve seen a lot of social media posts like sponsors and the team, which has been great.

“I kind of just thought that, for someone like Allan – he worked hard trying to push to get me on the team, and there was a few other people… and I kind of repaid them and the team and Jim Ochowicz for giving me the opportunity. It’s a great way to start out.”

“Yeah, for the national championships they make up a jersey… in case. I think.

“It wasn’t that expected for me because we didn’t really have… I didn’t have a clean set of kit for the podium down there or anything like that. Same with Rohan for the time trial…

“They had the jersey made up. Obviously they have to as well because the Tour Down Under is in one week’s time and if, for some reason, a rider of theirs didn’t win it could look pretty bad [if there wasn’t a new team sponsor prepared jersey] – and it could get pretty expensive in fines by the end of the week if they don’t have enough national championship jerseys ready.”