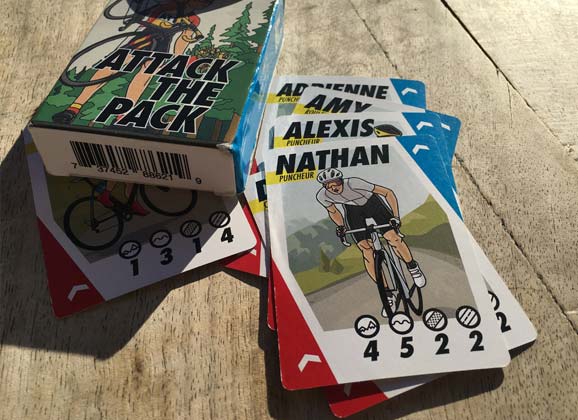 There’s a game you can play when you’ve got 20 minutes to spare. It doesn’t involve a screen. It’s not an app. It involves numbers and there are formulas that have been conceived after years of consultation with gaming specialists. And it’s about cycling. Sort of.

It’s not gambling. It is confusing. It is very well designed, the illustrations and presentation is very attractive. And even if you don’t know the rules – which are complex – it’s a card game that is designed for cyclists.

‘Attack the Pack’. It’s the creation of Ben, Ben and Nathan.

We speak to Nathan Haas about how it came about, what it is and how you can play. 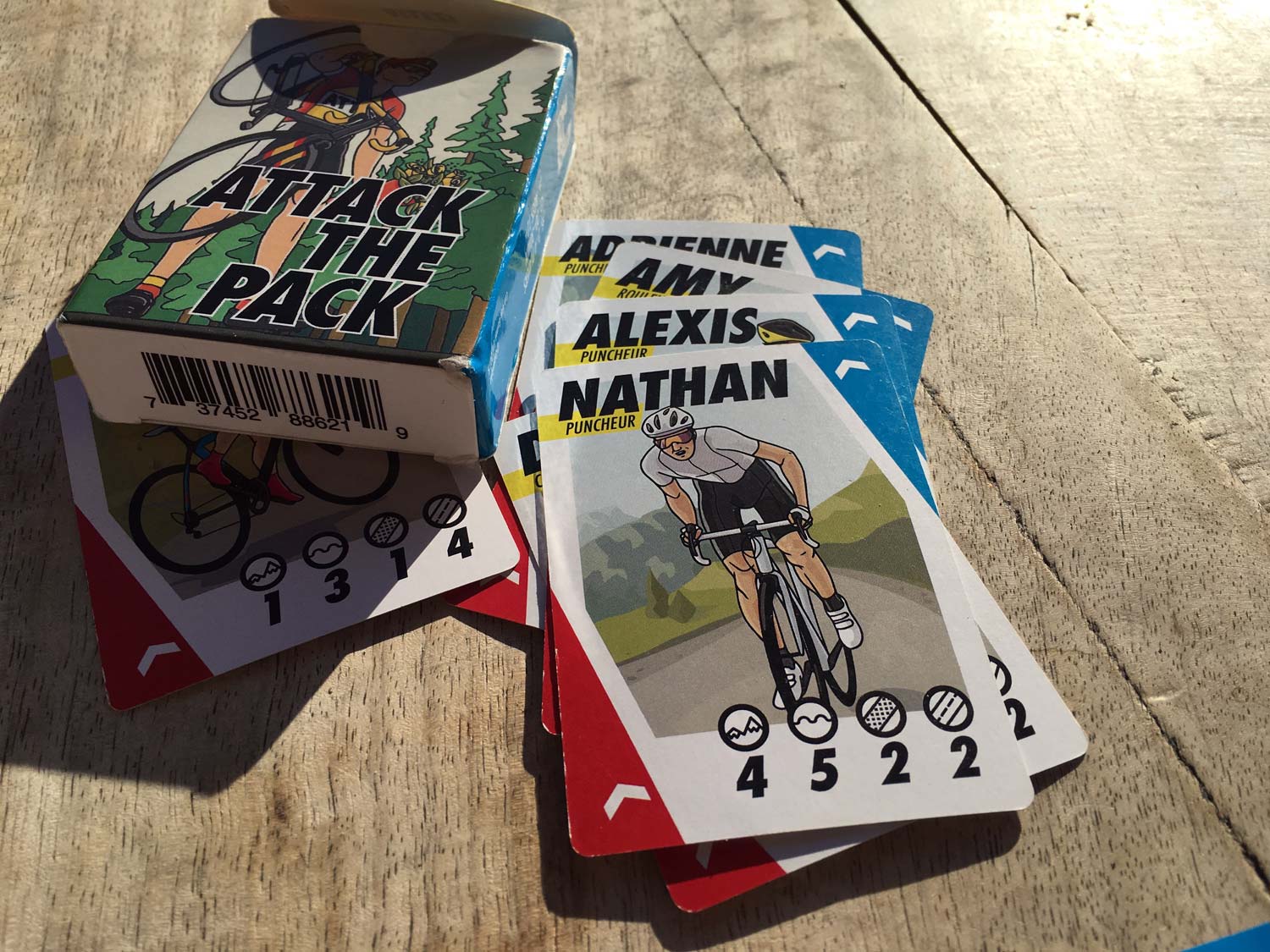 I’m with Nathan Haas, and we’ve talked a lot about bike riding and product technology and different things but one of his real passion projects is a great card game called ‘Attack the Pack’, that he’s developed with two friends of his.

It’s not just an ambition, he’s actually reached it and it’s a finished product and it’s fascinating and it’s fun and we played it with my 10-year-old the other day and he’s quite addicted [to the game]. How did it come about, and why?

“I love bike racing. It’s one of my huge passions but one of the things I love to do in my spare time is not look at screens, not watch movies, not watch TV, but actually to get my mind working and play some board games. And through my partner who has a lot of connections to some very cool people in London, I became a bit of an on-the-side gamer: board gamer, that is.

“[Nickolls] is a software developer, so he’s got an incredible mind for numbers and making things work.

“And Ben Broomfield is a very accomplished photographer in fashion, so he also has a very interesting eye for how things can look aesthetically.

“But the thing that tied us all in common is the fact that we all love cycling and we all ride our bikes every single day. They are casual racers and guys who just cruise through the city of London and Bath in the UK all day long and they follow cycling. So, for us, it was sort of quite an obvious thing where we thought, ‘Why don’t we actually try our hand at actually making a card game all about cycling?’ 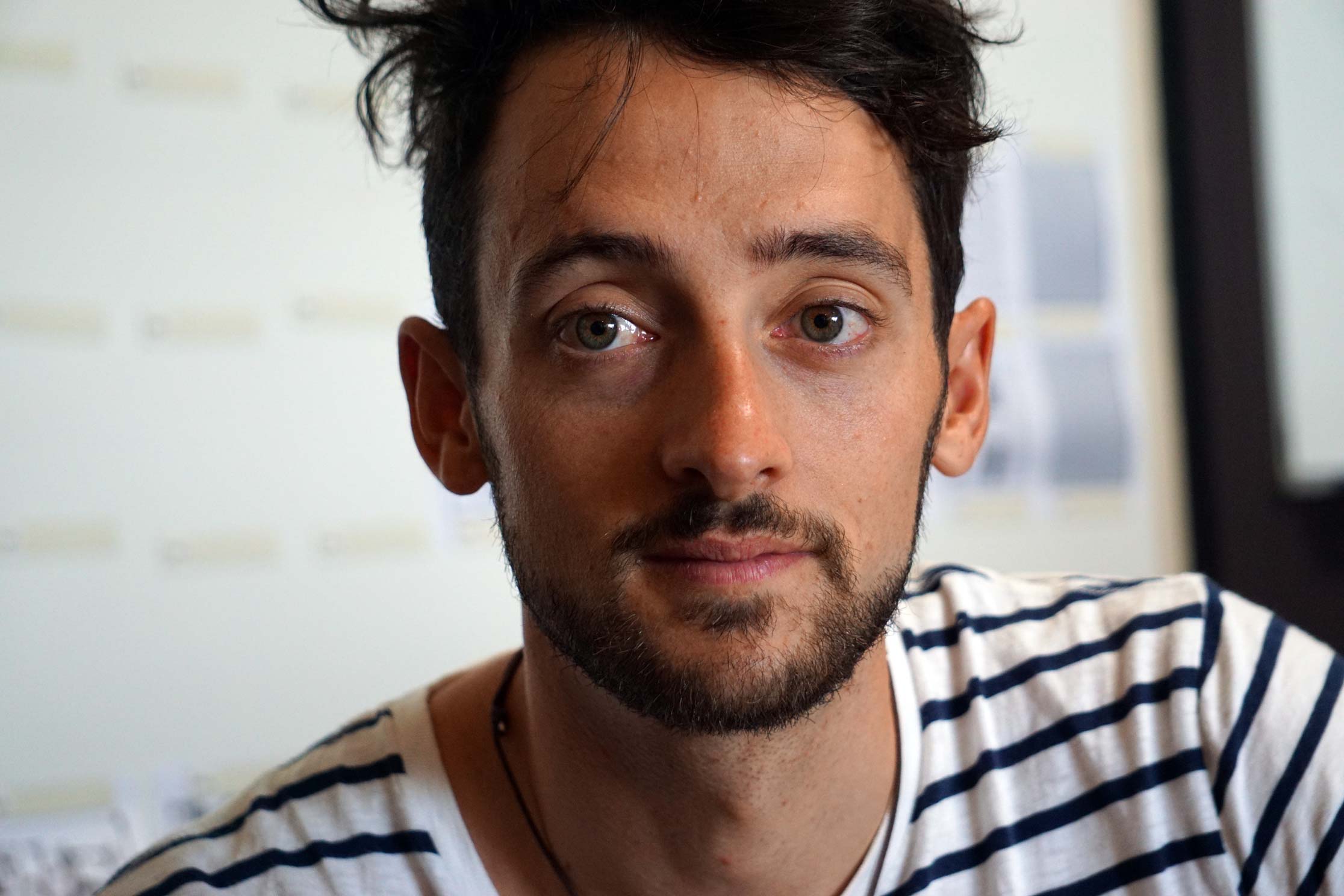 “There were a few card games lying around; one was called ‘Cycling Trumps’ and the game was loosely based on the concept of Trumps, but the issue with Trumps is the fact that it’s self-determined by how the cards get picked up from the deck. So there really is no dynamic about racing. It’s just: if you have the best card, you’re gonna win.

“The challenge for us was: how do we make a game that actually simulates the randomness, the dynamic nature – and just the craziness – that is a bike race? And we took quite a lot of time to get there.

“We joined some test gaming groups where you actually take your product that you have at the time and you go and meet guys who are professional card game and board game makers – they basically tear you apart and say, ‘This is crap!’ ‘This is good…’ and the two Bens worked really hard on, actually, the mathematics behind the game. Which, unbeknown to me, all board games are actually a science of numbers… and [we were] associating with all the right people to learn that and actually help us push through that.

“It was quite an awesome experience to see the game evolve.

“My hand in the game was to talk about how something didn’t seem harsh enough to actually be in cycling, or if something was as harsh as it needs to be. Like: a puncture, getting dropped from the breakaway – and then you’re just sitting in the peloton for the rest of the day, or you missed the front group because of that… so I was educating the game as it [was developing] about: ‘Maybe we could put a puncture card here’, or ‘we have to have the headwind feature…’ and the trio that we had were quite different in all of our roles.

“We ended up creating a game that, I think, perfectly matches what a bike race is.” 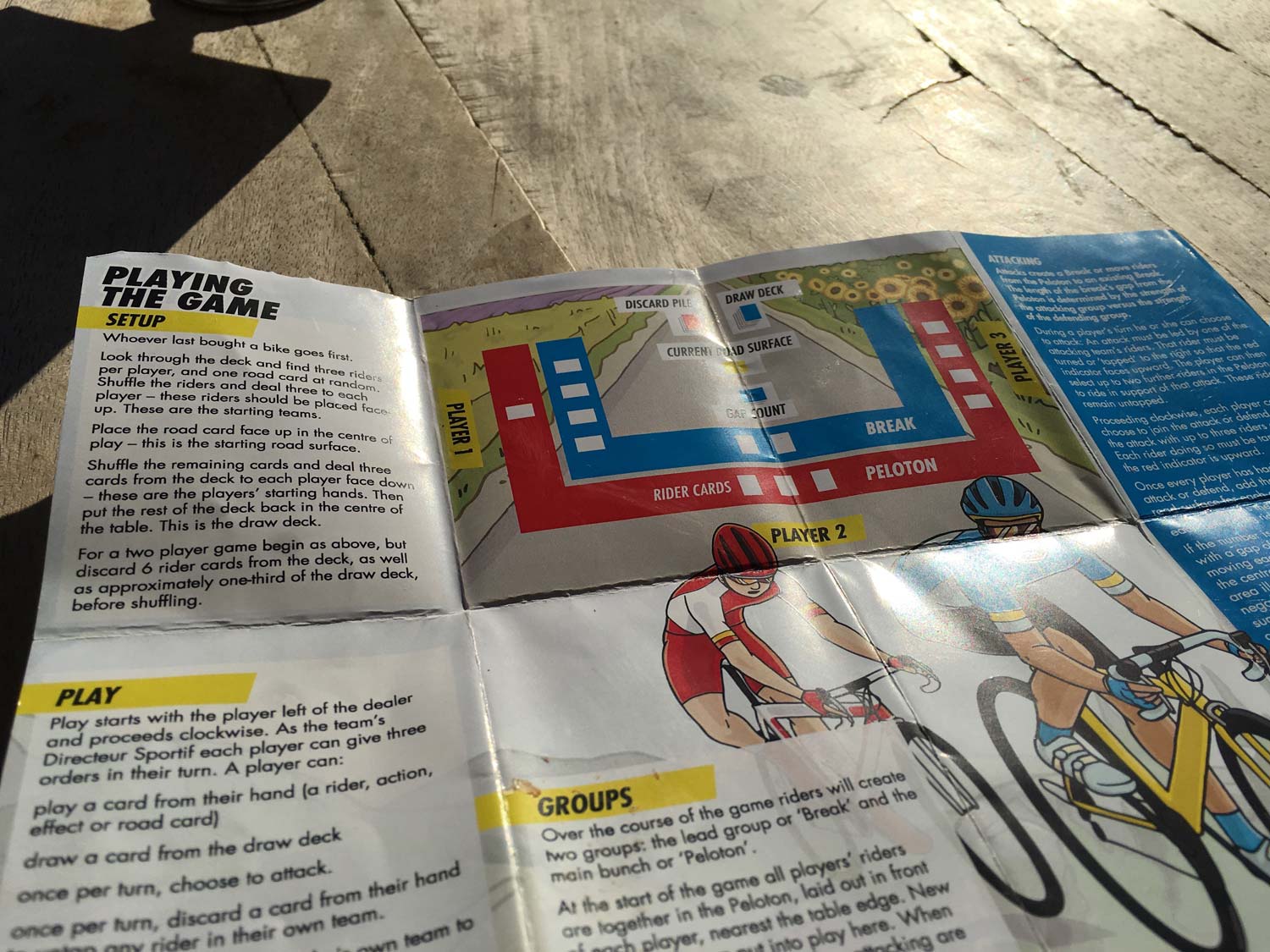 The illustrations are fabulous. You had it crowd source funded. It’s a great story, it’s a cycling story with no actual bike riding. But it brings everyone together, doesn’t it?

“Yeah, I think that was the thing that made this project so much fun to be part of. None of us are retiring off this card game. It’s certainly not something that we were ever doing to make money from but it was something that we really wanted to have as a passion project. It has been from the start, and it still is.

“We’re very proud of the product but I think we’re even more proud of how it came to be. 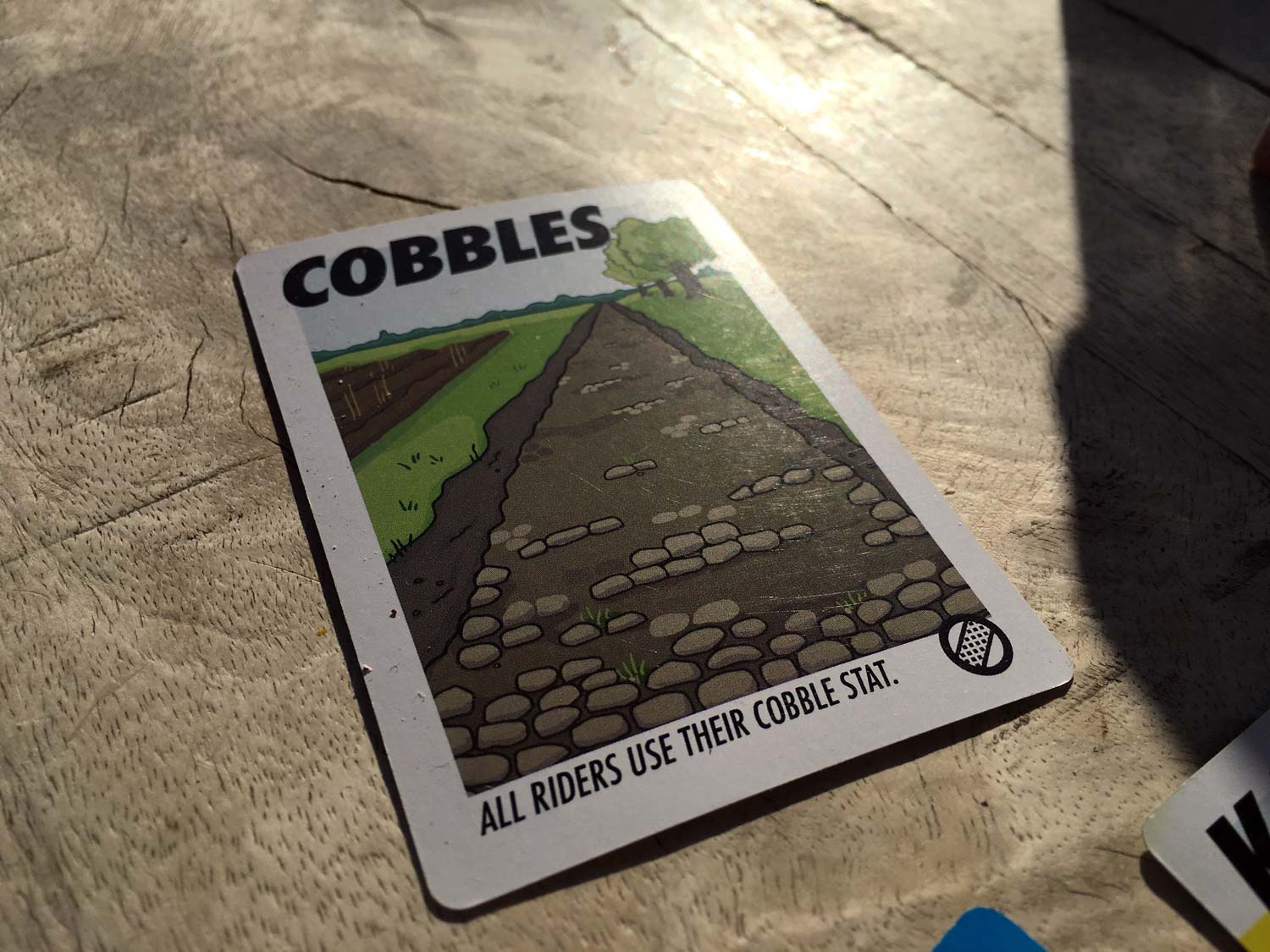 “In terms of the illustration, we also have another friend in London – her name is Adrienne – and she is one of the staunch figures of women’s bike polo… and she’s absolutely brilliant in what she does on the bike. But what’s even more brilliant is her art behind the scenes… being an artist, it’s also a passion project, but what she does draw, amazingly, is bikes. So we thought, ‘The synergy here was perfect…’ and we commissioned her to do all the illustrations.

“We didn’t give her any artistic direction, we just said, ‘You’re the artist, you go. We love what you do so we trust your style…’ and it just translated into exactly what we saw it being, which was so exciting and it’s why, with any future generations [of the game], we’re going to be working with her again.

“But then, also, the crowd sourcing thing was quite an interesting way to do it. We were a little bit hesitant to sort of say, ‘Nathan Haas, a professional cyclist, is associated with something that is asking for money to make a card game…’ because it was never something we were trying to cry poor with. The crowd sourcing, why we did it through Kickstarter was for that very reason that, if we didn’t hit the goal that we needed to be able to make the game, no one got charged on the actual Kickstarter donation so we were really using it to actually: 1. Give a little bit of PR and media behind it, but [2] also see the general interest for a cycling card game. 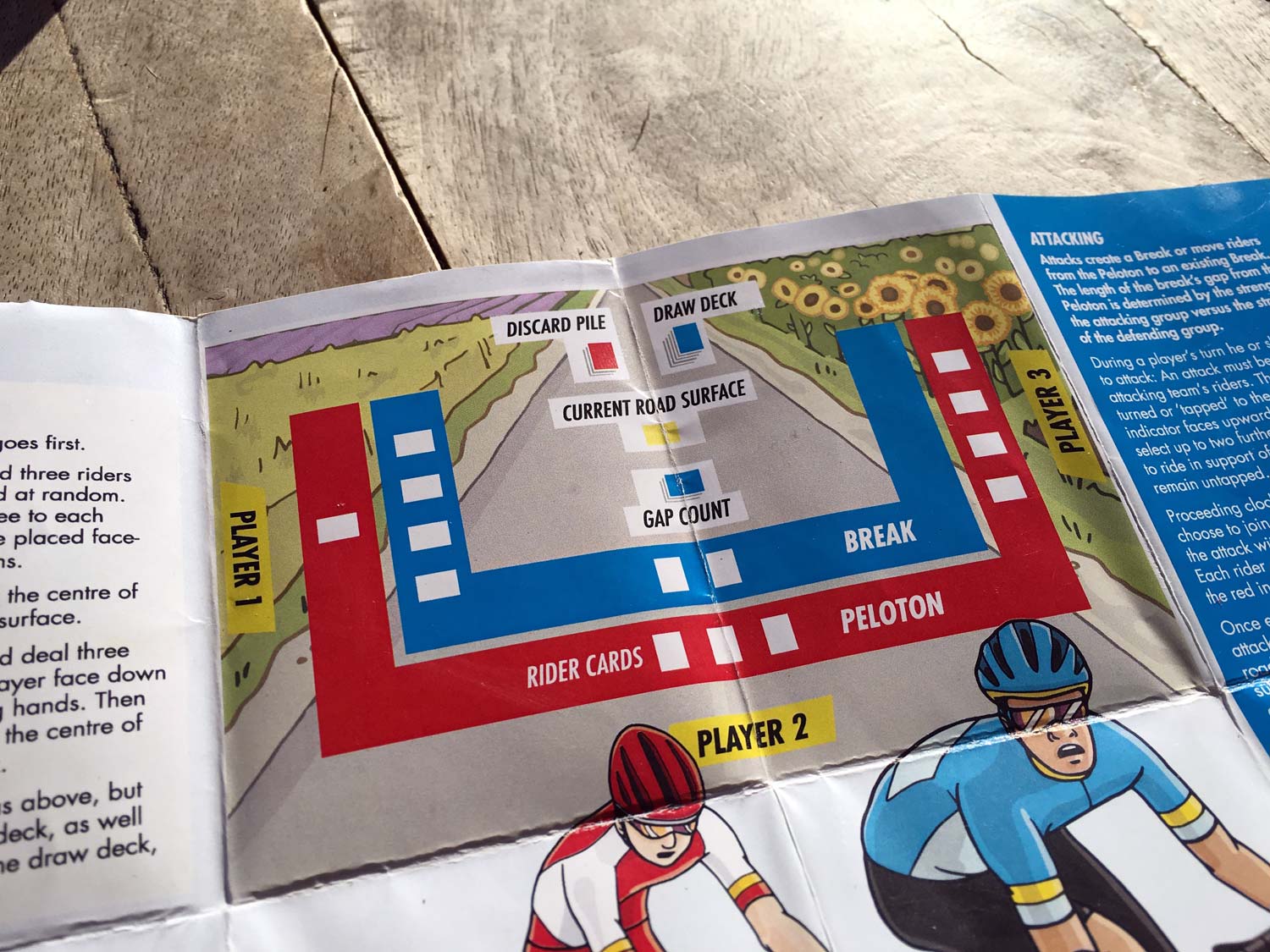 “We met our target super-quick. It only took a couple of weeks and for us that was enough of a message to say, ‘This is a go-ahead.’ Then we really tried to refine the mechanics after that – that actually took long than we thought, we thought we were really on par and then we realised that something had to be changed.

“That’s where the ‘sprint’ dynamic, the final sprint – the final kilometre actually – came from. We just felt that there was something missing at the end of the game and we’re really proud about how it ends. So, if you’re playing the card game in the future: the sprint finish… I don’t think I’ve seen a single one be similar and it always comes down to the line which is really fun.

“But it’s been something that’s really fun and what we love so far is that we’re still really using all of the feedback from our Kickstarter program in that we’re actually working with the people that got the first generation of the game to refine it. And ‘generation 2’ has already had a few things that we’ve refined.

“We’re changing a few of the terminology pieces to keep the game rolling.

“What’s been really fun is that the public has had as much of an influence since we’ve launched it as we have had in developing it, so it’s a very global piece of work.” 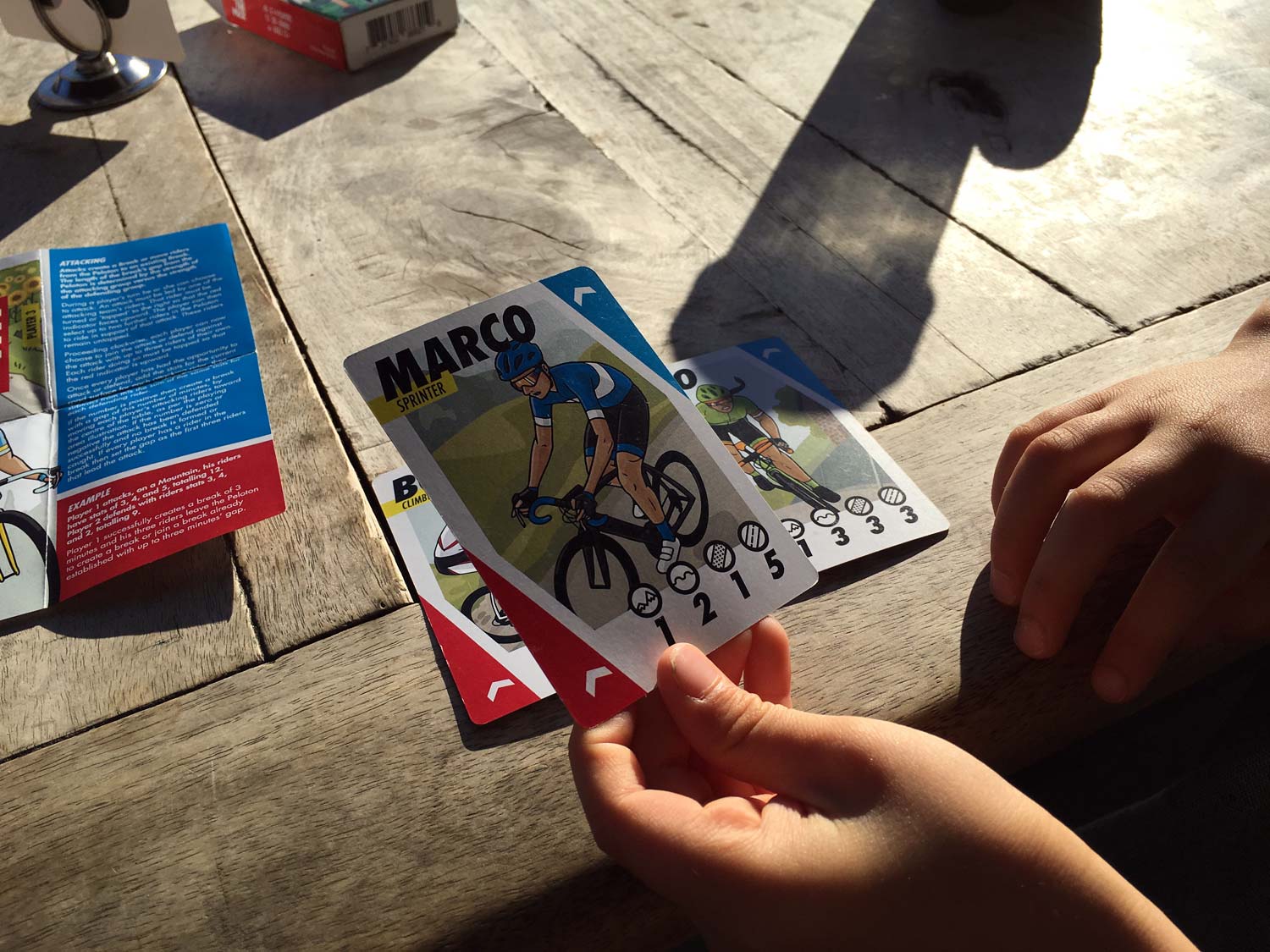 It’s great fun to play. It engages you and there’s a ‘competitive’ level and it’s still fun. I would like to say to anyone who starts it, ‘Read the instructions…’ it seems a little bit funky but play one or two games and you get the rhythm quite quickly and it flows very quickly’. What card games did you play as a kid? Was it Uno or poker or… how do you compare [Attack the Pack] with traditional card games?

“Comparing it to a traditional card game is difficult because there’s not many games like it in terms of theme. But there are quite a few games that are similar in terms of mechanic and that’s what sort of separates the two types of games, a game that’s theme-based and a card game that’s mechanic-based.

“But I used to love playing games like Uno and my favourite one was always Cluedo, I thought that was really good…

“I used to love the ‘classic’ games, especially Monopoly – it’s just something that has such an influence, if you do read the history of gaming Monopoly has such an amazing influence on what a card game can be and a board game can be. The new game of Monopoly Deal which is actually the card version of Monopoly, I think, is by far the best game on earth. I would love Attack the Pack to maybe have similar mechanics in the future. 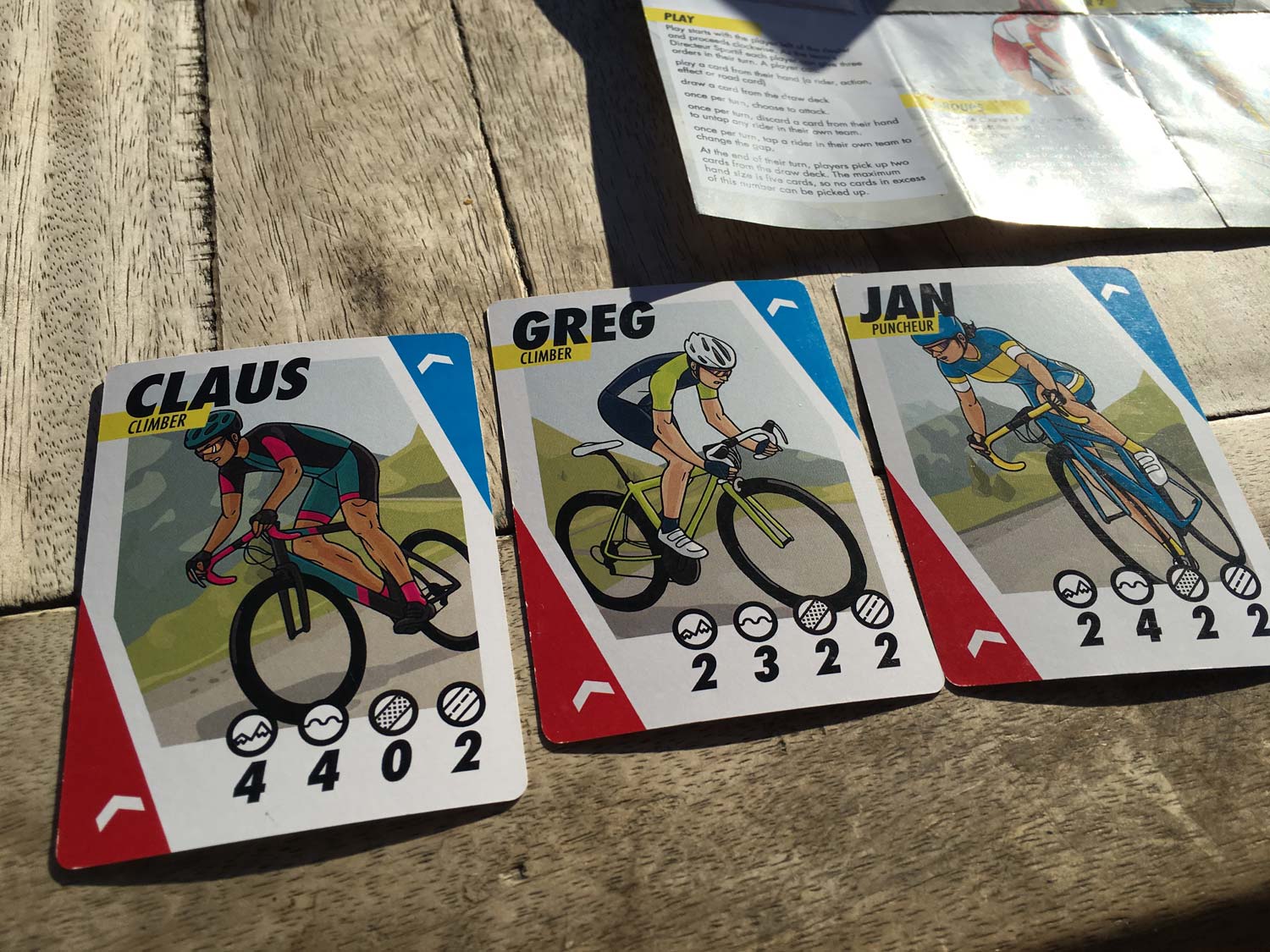 “But the thing to me – the thing about gaming in any sense – is that it brings people together. It’s time when you’re actually interacting as humans with humans and it can be fun. It can be competitive. It can be taken the wrong way… like in Monopoly but I think we need to spend less time isolating ourselves on phones and computers and screens.

“What we have kind of loved about [creating Attack the Pack] was – and it’s why we developed a card game, not a board game as our first game – is that when you pull up to a cafe in the cycling world, the thing that draws us together is bikes. Sometimes instead of talking crap tech stuff or whatever, we can actually just have some fun at the coffee table. It’s just in the back pocket of your jersey.” 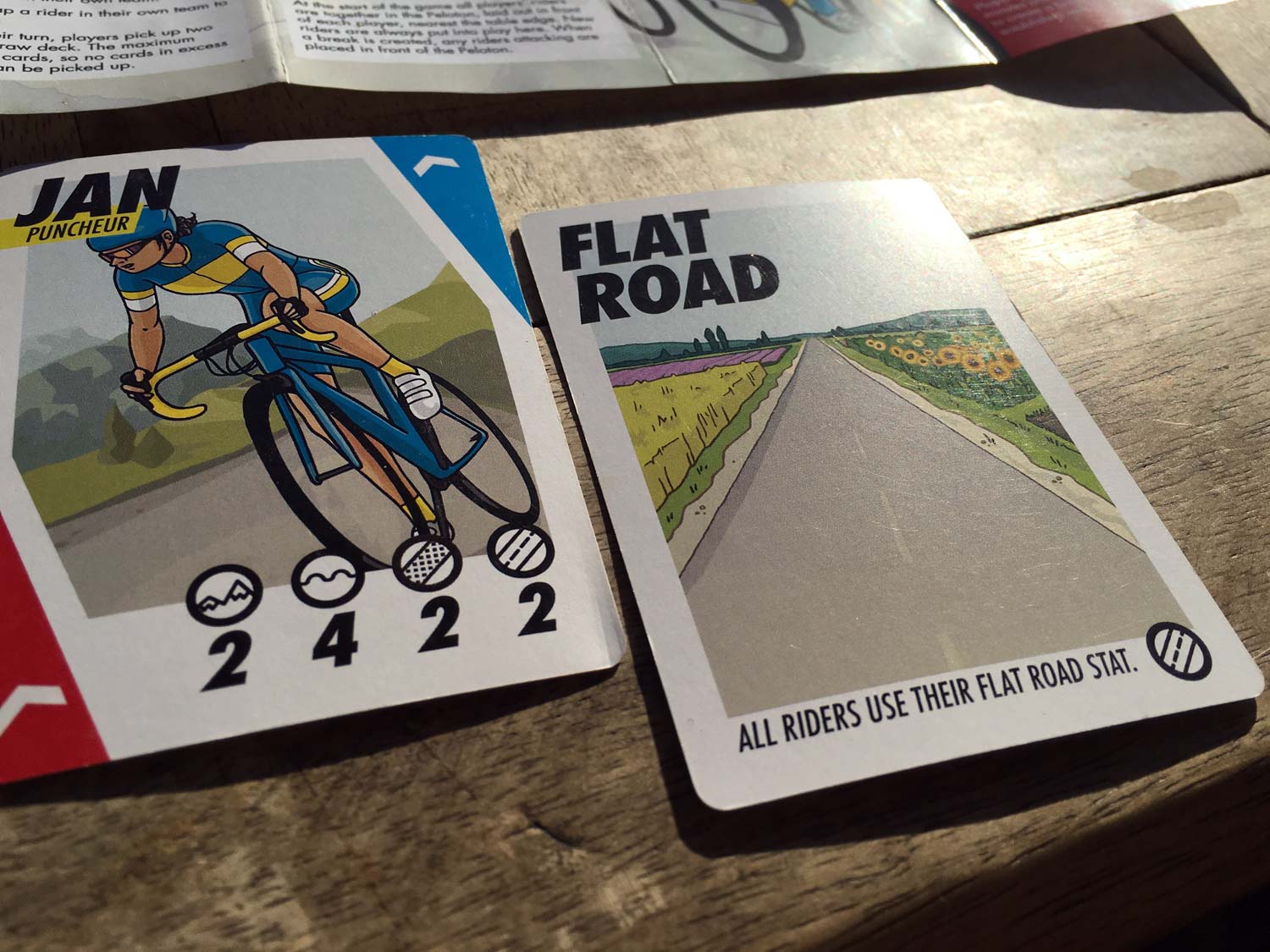 And the best thing is it’s possible to create it as an app but there is not an app for Attack the Pack.

It defeats the purpose.

“It totally defeats the purpose.”

“It’s good fun but we’re also looking to launch towards [what] we’re already building: a board game. We’re trying to evolve and grow and see how far we can go with just another fun project, and hopefully people can enjoy what we’re doing as much as we’ve enjoyed doing it.” 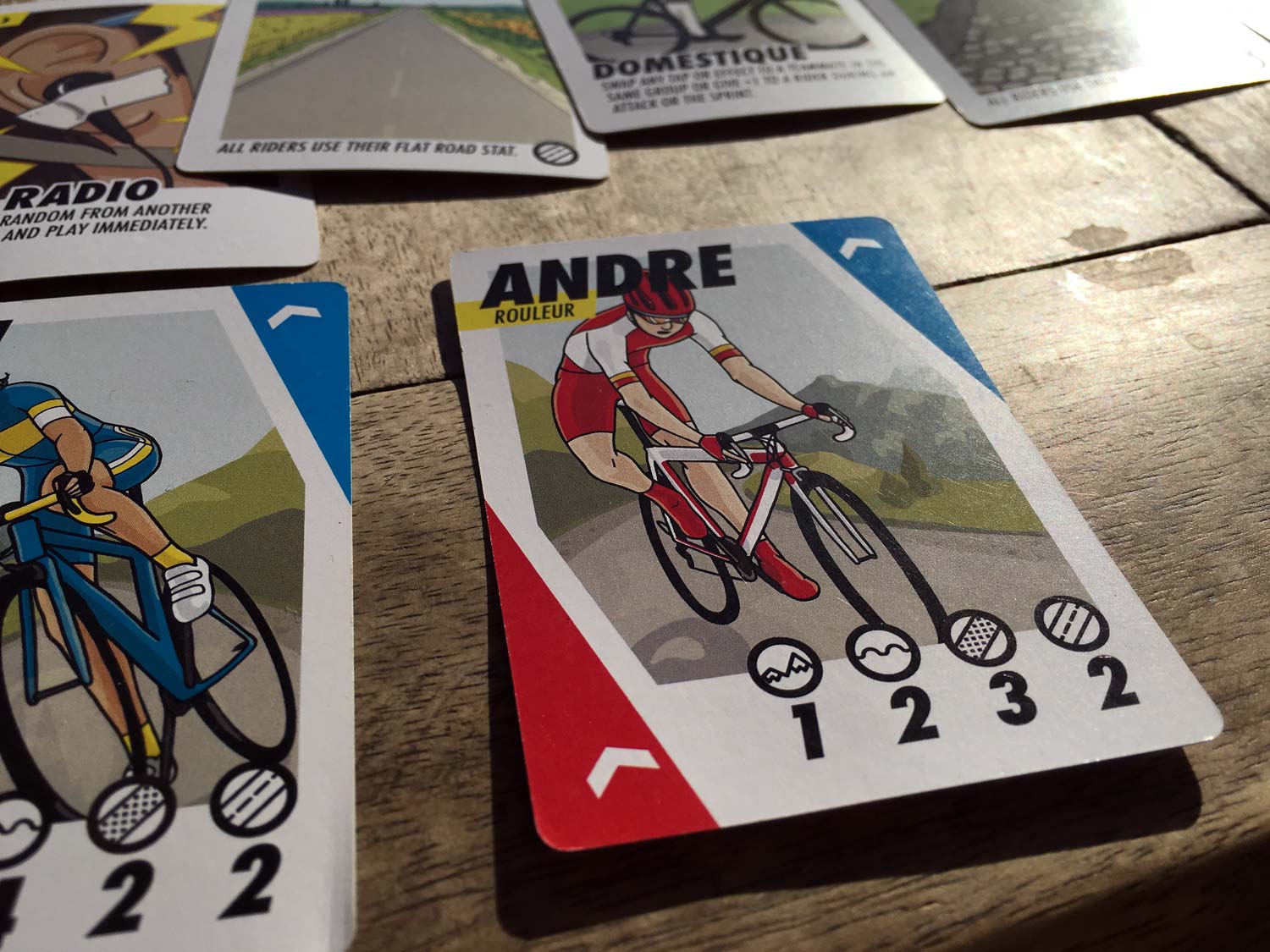