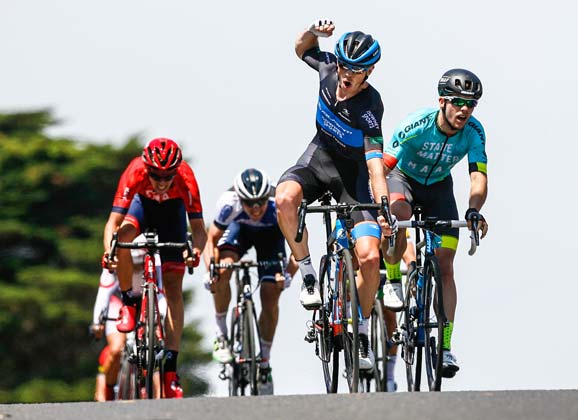 Pat Shaw: ready for the Tour Down Under

Of the 15 finishers in the Australian championship road race on Sunday, there were four from the Avanti-IsoWhey team. In ninth place in a race with just 15 finishers was Pat Shaw, a rider from Ballarat who regularly animates the NRS scene with colourful language, strong racing, and a committed work ethic.

This year he’s also put himself in the winner’s circle. 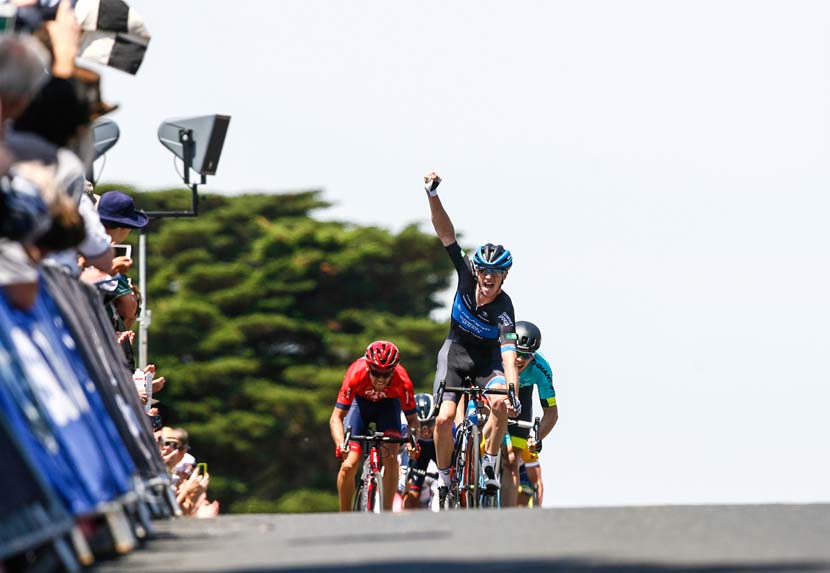 At Portarlington on 3 January, Pat Shaw threw a victory salute: winner of round three of the Mitchelton Bay Cycling Classic – a series of one day races at the start of the year better known as ‘The Bay Crits’.

Eight days after that win ahead of Daniel Fitter, Sam Spokes and Caleb Ewan, he was told that he would soon make his WorldTour debut. Shaw is one of the seven riders who make up the conglomerate team for the Tour Down Under known as UniSA.

There’s a great deal of pride for RIDE to see Shaw’s name amongst an impressive roster of professional cyclists. When Pat was just 13, the magazine played a small part in keeping him interested in cycling…

He explains that story and more about his in a brief discussion we had a day after the nationals.

Click the SoundCloud file to listen to the discussion between Pat Shaw and Rob Arnold and/or read the transcript below.

RIDE: It’s the after the nationals and I’m talking to Pat Shaw who has been listed as a rider for the Tour Down Under; it’s going to be his debut, he’s 29 years old, and he’s from Ballarat. And he was one of the 15 finishers in the road race. How did you pull up?

Pat Shaw: “A little bit sore this morning. I didn’t sleep so well last night but after a nice trundle on the bike I feel pretty good. I know I’ve got a lot of recovery to do from now until the weekend to get ready for the Tour Down Under, but I’m really pumped.”

You’ve got two young kids. You raced near your home town. And the Monday after the nationals, you’re mowing the lawn. Do you think there are a lot of professional [cyclists] doing that?

“I’m probably the only one who is doing the Tour Down Under that just mowed my lawns but that’s part of it all; it keeps life simple and keeps things in perspective.

“I love my family time and I think that’s probably a pretty big key to why I’ve got the form I do because, off the bike, I can concentrate on other things.”

There’s a little bit of a back story between Pat Shaw and RIDE Cycling Review. I wonder if you could recount that…

“When RIDE magazine first started, every Cycling Australia member was issued a magazine and given the option to subscribe.

“I did subscribe and I was actually lucky enough to win the first ever bike prize for subscribing to the magazine.

“It’s a long time ago and I remember it well because dad would never let me have [Shimano] STI levers, and the bike came with STI levers.

“We had to have the discussion about if [the bike] was too good for me.

You’ve lived the cycling life for a long time, evidently… You’re going to make your WorldTour debut on Tuesday next week. What do you make of the prospect of the Tour Down Under?

“I accept it as another big challenge; it has taken until now to be ready to race at that level.

“I raced the Cadel Evans [Great Ocean] Road Race last year and that gave me a bit of a taste of the level of those guys and I quite enjoyed that experience.

“I remember saying to Patty Bevin, ‘I wish I only had a couple of races with these guys before this event so that I could have been better prepared.’ This year I’ll get that option and hopefully that’ll also help for the Herald Sun Tour as well as Cadel’s race after the Tour Down Under.” 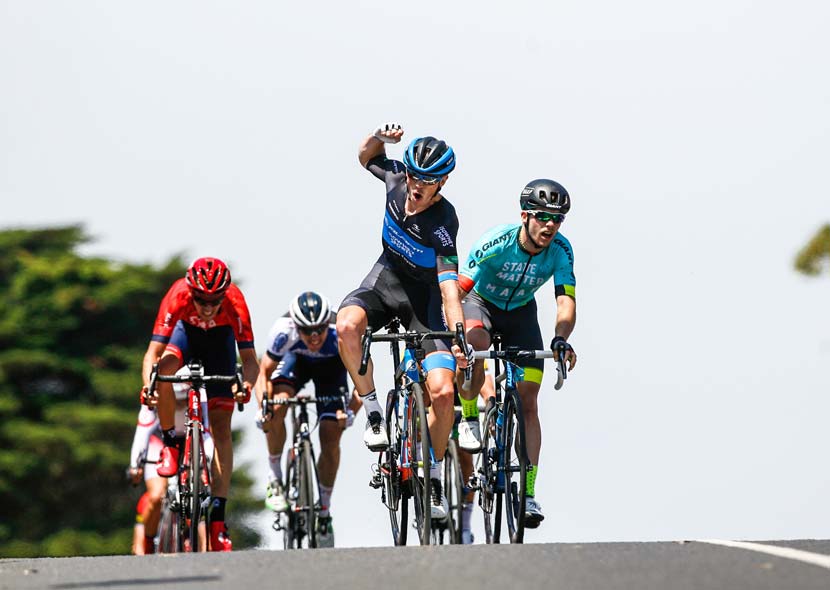 I’ve been asking everyone the day after the nationals for their take on Jack Bobridge’s performance. What do you make of it?

“Well, I think there is only one way to describe it: fascinating!

“What an epic display of his pure, raw talent.

“The great thing is we all know how well Bobridge will carry that Australian champion’s jersey all year in the European peloton. I think that’s a big thing: having someone represent our country, showing our colours all year – it needs to be someone who is going to put themselves at the front of the race. We know he definitely is going to do that.”

I know on the NRS you have a reputation for – ah, how do I put it…? Speaking your mind in the bunch. I know that you try to persuade a few people to do things the way that you want it done. Was there discussion like that when you realised that Bobridge had nine or 10 minutes in the road race?

“No. I think when I realised that Orica-GreenEdge had ridden for two laps and were actually losing time initially that Bobridge was going to win the bike race and we were now fighting for podium positions, second or third.

“My main objective was to have Avanti-IsoWhey on that podium. We succeeded with Pat Lane finishing third but it could have easily been any of our four guys who finished in the top 11.

“I think we really played that card well and, in actual fact, yesterday I probably talked the least I’ve ever spoken in a race because it was just too important for us to get such a great result.

“Now, looking back, we’re just stoked that we have achieved that podium – especially against the class field that there was and also in a race when there was only 15 finishers. It just shows how much of an attrition race it was.”

I think your story is interesting because you told me just before we started this interview that you’re riding 18 or 19 hours a week and now you’re lining up in a WorldTour race, you’re one of 15 finishers in a race of attrition… how do you find the form in that limited time that you’ve got to be on the bike?

“I think it’s been a lot more to do with the things I’ve done off the bike.

“I haven’t touched alcohol for a couple of months – not in November or December. I’ve eaten well and I’ve got huge backing from BioCeuticals and IsoWhey Sports with nutritional products to keep us really healthy.

“I’m religiously taking vitamin supplements every day, even vitamin D – we know what Ballarat’s weather is like and we don’t get a lot of [the sun] here…

“I’m just keeping those vitamins and minerals in the system and also just sleeping in good patterns when I can.

“But it’s sort of all just fallen into place and I really can’t put my finger on it; it’s the first time in my career when I am scratching my head a bit going, ‘Is this real?’ because the sensations have been really good. Also the opportunities have just opened up in the races at the right time.

“For some reason I’ve just made the right move…

“In the past, those 50/50 calls haven’t gone my way… I don’t know, maybe if had of not gone for the breakaways in the national titles in previous years I could have had a high finish in those editions.

“But I’m not one who looks back with hindsight, I am just thankful for the present and just look forward to the next challenge.” 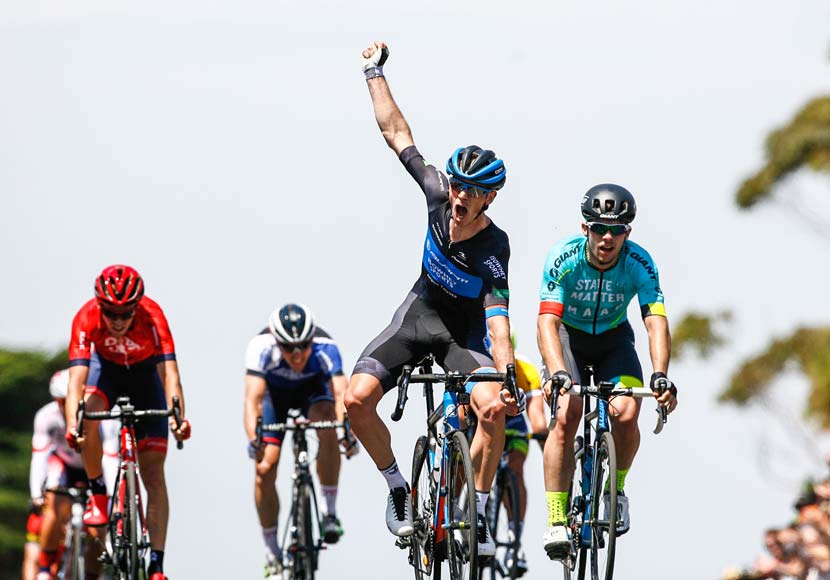 Your team got a coup today really by having five of the seven guys for the UniSA team at the Tour Down Under named; the Avanti-IsoWhey team is really well represented because of that. And you know Andrew Christi-Johnson very well, you’ve been with [his team] for years. What’s his recipe? Is it having a guy like Mark Fenner alongside that brings enthusiasm to riders that is hard to find elsewhere or…?

“Definitely including Mark Fenner in the previous few years has been a big step in the right direction in the sense of preparation of athletes for the racing.

“I don’t think that particularly attributes to good riders coming to the team; what contributes to that is that they’ve got friends who are in the team who have probably been in other teams as well. They probably just go back to their friends and say, ‘I’ve never experienced an environment like this in cycling – or in sport in general…’

“That’s where Andrew Christi-Johnson has really developed a culture at this team. From 2011 when I first joined the team – and the initial stages of being with this team – I already thought, ‘This place is a really nice place to be.’

“Even if you’re not performing well you’ve got something that you want to contribute to the guys because it means something.

“The culture that he has set is what’s been successful so we’ve just kept building on that culture.

“Really, to bring in eight new riders to the roster in 2016 and already see such cohesion in the group just shows how strong that culture is.

“We only met each other in the middle part of December. We spent a week in Tasmania together and it gelled almost immediately.

“We were very active in the Bay Crits and worked probably as good as any team would after being together for 12 months.

“I think [Andrew] needs a big pat on the back, but he doesn’t look for that. He just enjoys seeing that it is working and that he’s changing young cyclists’ lives every day.”