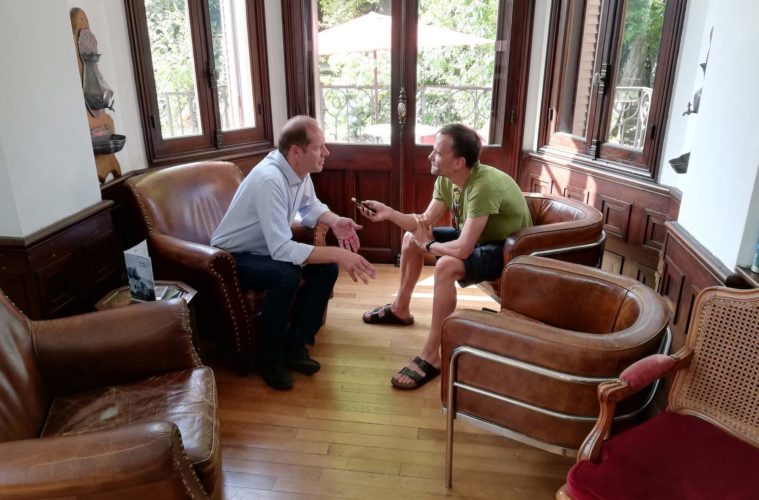 RIDE Media caught up with the director of the Tour de France,Christian Prudhomme, during the second rest day of the 2019 race.

Christian Prudhomme has been the director of the Tour de France since taking over the job from Jean-Marie Leblanc following the 2006 race when the pair shared the role as part of the hand-over.

Before that, Prudhomme worked in the media, calling the race (amongst other sports) for France Télévision.

By pure coincidence, RIDE Media happened to be staying in the same hotel as the Tour director on the eve of the second rest day of what has been a remarkable race for the first 15 stages.

He kindly agreed to take a moment on the rest day to do an interview in the lobby before we set off from the Pyrenees to Nîmes, where the race resumes on Tuesday.

Below is a verbatim transcript of the exchange.

– Click the SoundCloud file to listen and/or read the transcript below. –

Click the link above to listen to the interview.

RIDE: It’s the second rest day and I have the opportunity to catch up with the race director himself, Christian Prudhomme. What a remarkable Tour we’ve had so far. Compliments on a wonderful course, one that’s absolutely elicited the racing you would have dreamed of, I imagine.

Christian Prudhomme (Director of the Tour de France): “Yes, but the compliments are for the riders.

“This year, of course, riders have talent and they are so good. We have attacks every day. We have surprises every day.

“We have great winners. We have a great race. And of course I’m happy.

“I hope the third week will be as good as the first two.”

RIDE: Are you optimistic that there maybe, in fact, a French win? And, if that’s the case, is it perhaps Julian [Alaphilippe] or, more likely, Thibaut [Pinot]?

“An open race with attacks, with everything, every day.

“Tomorrow it’s a flat stage around Nîmes. We can say, ‘Oh, it’s nothing…’ but it’s exactly the same as it was in the stage [to] Albi because there is wind, much wind, in the region. So, everything is possible.

“Maybe the riders who are not as good as Thibaut Pinot in the mountains will try to do something, as they did a few days ago… I don’t know. 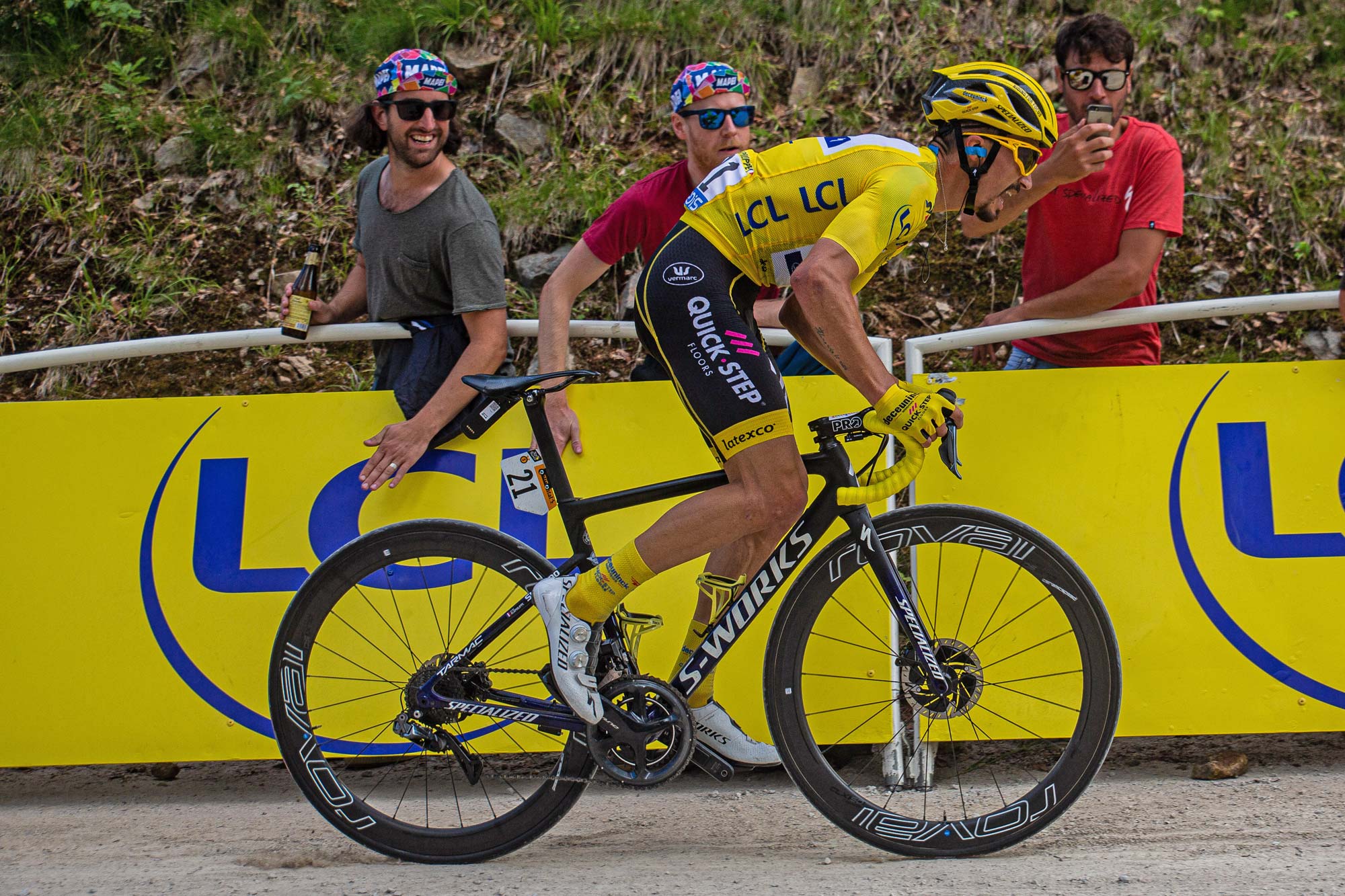 RIDE: I want to go back [and talk about something] that feels like years ago, but stage [six] was a masterstroke. La Planche des Belles Filles was already beautiful, but with the dirt road – for me – the imagery was spectacular. There weren’t big time gaps but it was a spectacular race. Will [the Tour] return there now every year?

“So, it’s what you feel… not the figures.

“You see a rider and you think he’s good or not good, but there is only 25 seconds between them. And that’s very good.

“On the finish line and La Planche des Belles Filles, you had three riders within two seconds: Geraint Thomas – wow! Thibaut Pinot –ooh! And Julian Alaphilippe with his yellow jersey – for the last time, but just for two days because two days later, he was again the yellow jersey. So, that’s very important.

“And Planche des Belles Filles is only possible because the politicians from the region(s) love cycling and love the Tour. Without ‘Mr K’ – Yves Krattinger (Président du Conseil général et Sénateur of the Haute-Saône) – it would have been impossible. He is the guy who, seven years ago, said to us: ‘Yes, it’s possible. I agree. We will do some works to have a finish line…’ And he did it.

“It was not that easy for him.

“So, we need this link between the local politicians – a very strong link – otherwise it’s impossible to have the route we have.”

RIDE: But it was your idea to carve the dirt road into a ski field?

Prudhomme: “It was mixed.

“I saw on the internet a spectacular road to La Planche des Belles Filles where we would have liked to have a finish line… but, because [the Tour] is big – we are happy to say, because it’s true: 190 countries have the images of the Tour – but that means there [is a need] for trucks and everything at the finish line.

“So, [originally] it was impossible. [But] he did what was necessary to have the finish.

“And we had, at that time, the first ‘wall’ – the first very steep road, at 20 percent – and when he did that [the Tour’s visit was certain].

“Each time we went together to La Planche des Belles Filles – during the Tour or in December, February or May – we were looking together at the top of the mountain. And I said, ‘One day… maybe…’ 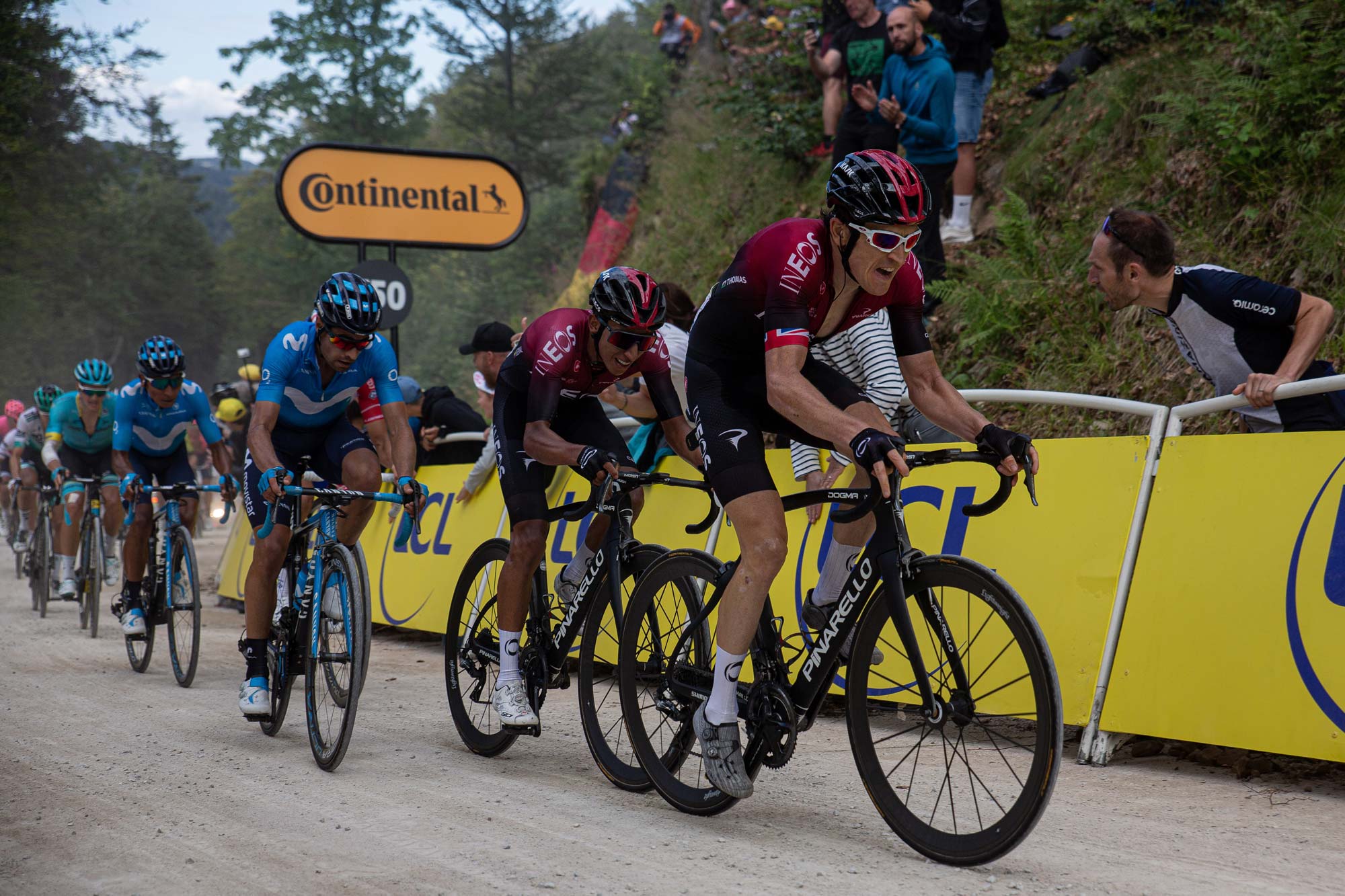 RIDE: It was a triumph [in my opinion]. The images were spectacular. I’ve heard it said that you believe – and I agree – the best Tour route is one that has many seafood ports. This year we don’t go to the ocean at all, or even the Mediterranean. So, does the racing that we’ve seen this year mean that we get rid of [seafood for future editions]?

Prudhomme: “Your question is The Question when we talk about the Tour and its route because it’s the most important cycling race in the world, but it’s much more than that.

“For the French people, it’s impossible to not go to Brittany, for example, for five years. And this year, because we are in the east of the country – where we have all the mountains…

“And there is a mix between what is very important for a wonderful race, and what is [equally] as important: to go everywhere in France, every five or six years.

“When a Frenchman sees the route of the Tour – the map – if he is from the west, he says, ‘Prudhomme is crazy! This man is mad.’

“The Tour talks to everybody in France. So, we have to go elsewhere.

“For example: last year, unfortunately, from the Vendée and Brittany and to the north, it was not a nice race. But we have to go there.

“But… if last year, Julian Alaphilippe had attacked on the road to Quimper or Mûr de Bretagne, everybody – every fan, every journalist – would have said, ‘Oh, what a wonderful race!’

“So, we have only a small part of the answer.

“The most important part depends on the riders – and this year, they are just magnificent.”

RIDE: Have we benefitted, perhaps, from not having Chris Froome here because we’ve seen his domination and we understand it…

Prudhomme: “I can’t say that because I wish him well.

“So, that’s the most important thing…

“But, of course, [the GC race] is like an open door and Julian Alaphilippe has put his foot in the door. And, afterwards, Thibaut Pinot… and after that [other] guys.

“For me it’s exactly this image: an open door and Julian Alaphilippe has put his foot [in]… and he’s trying to push the door [further] opening – with other guys now.”

RIDE: So, we have multiple scenarios. You said, ‘Five [possible] winners…’ we could see either Julian pull off an amazing coup, Geraint Thomas the defending champion, Steven Kruijswijk giving Holland its first win since 1980, Egan Bernal a possible first Colombian champion… and Thibaut Pinot a super-popular Frenchman. It’s a great script…

RIDE: Of this five, who is your most likely…?

“David Gaudu is so important for Thibaut Pinot

“But… is Geraint Thomas number-two [for Ineos]? Or is Egan Bernal number-two?

“[Eitherway], it’s not the same scenario because [Ineos] will have, for sure, the bestnumber-two in the team. So, it will depend on that.

“Is Gaudu able to do what he did in the last days (stages 14 and 15) and who is number-one in Ineos? Because, if today they say, ‘It’s Geraint Thomas the defending champion…’ or ‘Egan Bernal…’ with the other guy as a team-mate – and ‘only’ a team-mate, not a co-leader – it will be very different because suddenly they will [again] have, according to me, the power.” 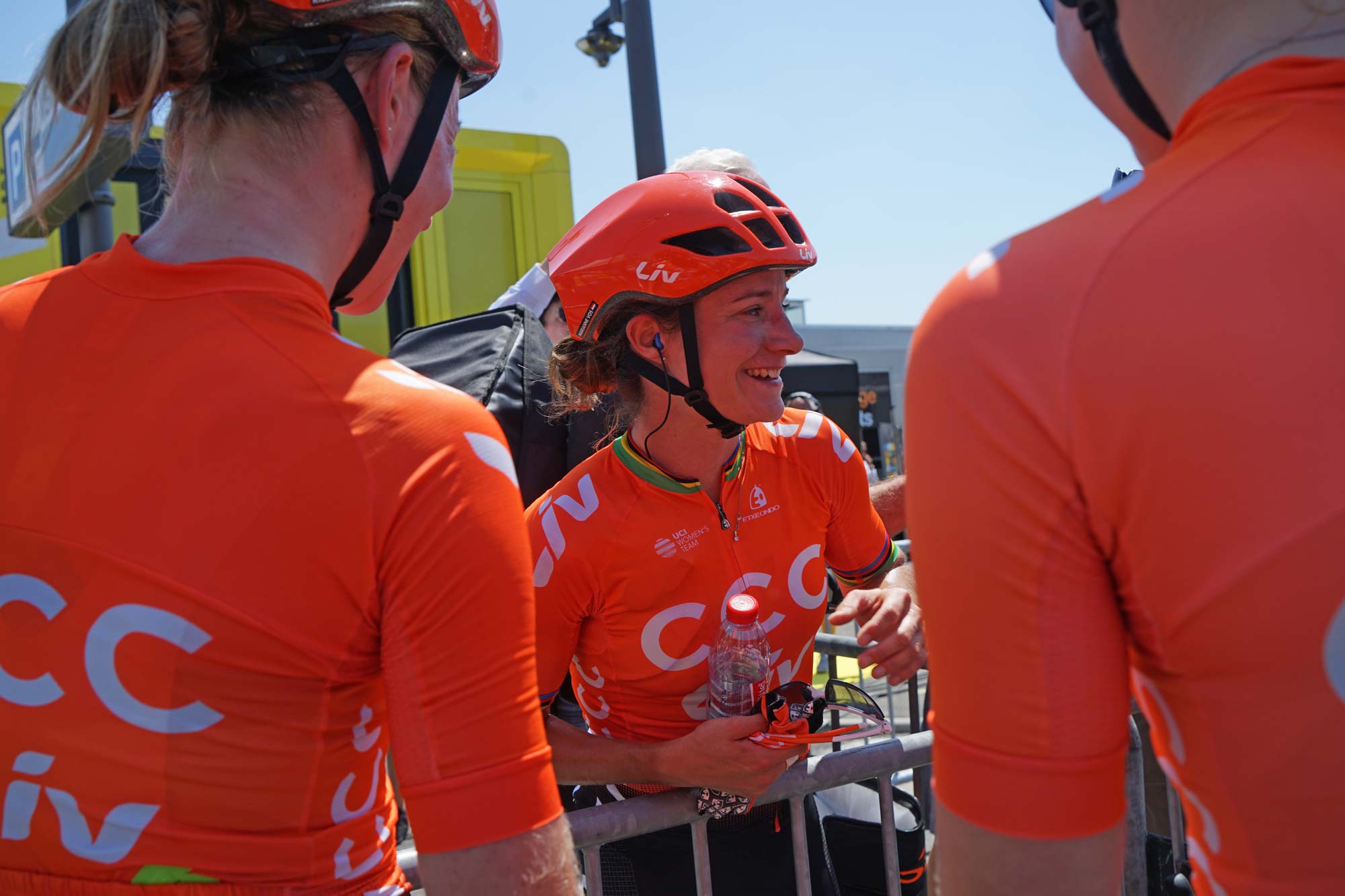 RIDE: It’s a great script and we wait with anticipation for next Sunday. But, while I have you, and it’s an important question for a lot of cycling fans… We have heard a rumour that there’s [some] real innovation coming for the women’s peloton and that ASO is very proactive. Have you got anything to add about that or is it too early?

Prudhomme: “We are working on that.

“Women’s cycling is very important for us and we can’t do another race – one more race – during the Tour in July. We don’t know how to.”

RIDE: I don’t think anyone really wants that either…

Prudhomme: “That doesn’t mean we don’t to do something for cycling for women.

“We can’t talk to people very far away and [then] not talk to women next to us. That would be stupid.

“But it’s to think of something different. During July, we don’t know how to do it. But we haveto do something else, of course.

“I’m always thinking about what Marianne Vos – who won the La Course (on 19 July), who is not only a great champion but a remarkable woman – said to us a few years ago. They want media thanks to us.

“So, I know what you do for cycling but when you organise women’s racing… for example, Liège-Bastogne-Liège, and there is nothing in the newspapers… pffff!”

Prudhomme:“Yes, but Liège-Bastogne-Liège for women, we created two years ago. I know it was not on TV. It willbe on TV next year, we have an agreement with RTBF, Belgian TV.

“But we have to go step-by-step. But not during the Tour.

“We don’t know how to [manage] that – it’s impossible.

“Already there are 29,000 policemen – gendarme and firemen… We can’t have [it any other way] with what happened in France in the last few years – the attacks, the riots, social difficulties – it’s impossible to have [even] one policeman [than we already have].

RIDE: I understand. You raised it, so I have one more little question and you’ve talked about it… For example, the effects of [the] Bataclan [attack] and the Nice incident in 2016… and the security on the Tour is immense! I’ve done 22 of these [races] now and I know that the last few years have been entirely different. For me, when I see the operation, it is so massive I wonder how long it can sustain – at this level of security…

Prudhomme:“I don’t have the answer.”

Prudhomme:“Of course. The answer to that doesn’t depend only on us. It depends on the government, of course.

“But you have so many people on the road, so many people with smiles on their faces. And these people don’t see as many policemen as we [people in the Tour entourage] see.

“In the last few years we have [increased security]. We [now] have the special forces. It was impossible to imagine that five years ago. And they are with us now since 2016.

“But the Tour is always the Tour and there are always smiles on the faces of the spectators, so that’s nice.”

RIDE: Let’s hope this celebration of the last two weeks continues another week and thanks very much for taking the time to talk.