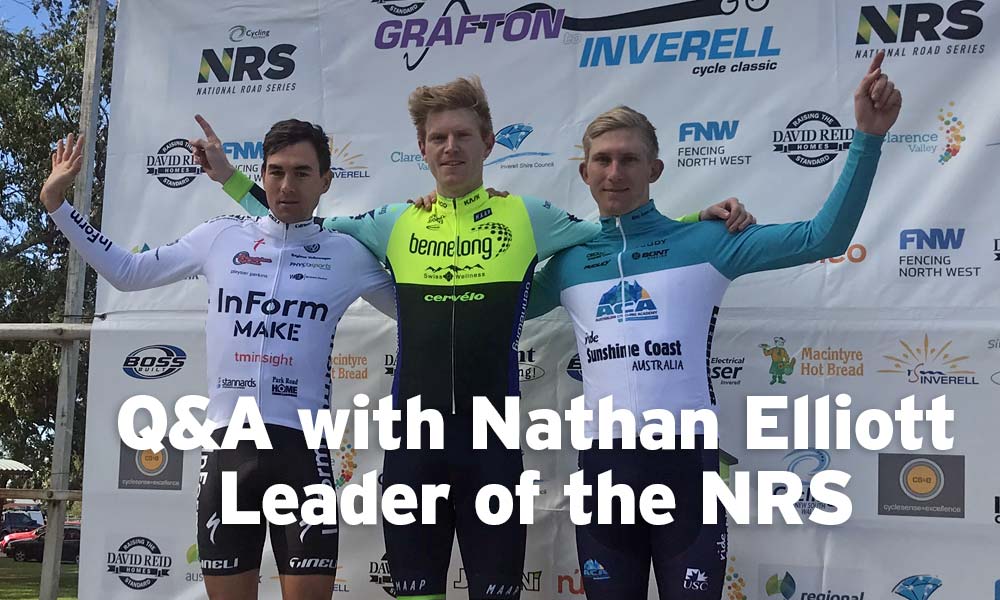 Quick Q&A with Nathan Elliott: leader of the NRS

At 27 years of age, Nathan Elliott has gathered a collection of wins in both of Australian cycling’s true ‘Classics’. The back-to-back winner of the Melbourne to Warrnambool is now also the champion of the Grafton to Inverell… and the first leader of the NRS in 2018.

Almost a week after he beat Raphael Freienstein to win the opening round of Cycling Australia’s National Road Series (NRS), Nathan Elliott took a moment to answer a few questions from RIDE Media. He’s been a regular on the Aussie racing scene for a long time and this year he contested his “fifth or sixth” Grafton to Inverell. They tend to blend into one another… until the victory is achieved.

Elliott explained that it was “super cold” and “very windy”, as is often the case for the #G2I(as it is known in 2018). He and Freienstein spent a large portion of the race on the attack and they arrived in Inverell with a lead of only a couple of hundred metres on a peloton that was rapidly closing in.

With a solid sprint – and a 12-second stint pushing 1,200 watts – Elliott managed to beat Freienstein for the win… it was so close that there was hesitation when it came to throwing a victory salute. Ultimately, the rider from Bennelong-SwissWellness could celebrate and relish the fact that it continues to have a stranglehold on the NRS.

RIDE:It’s the Friday after the first round of the NRS in 2018, the Grafton to Inverell, and I’m talking with the winner, Nathan Elliott. We thought we’d catch up and sort of overview what went down on a cold, windy day going up the Gibraltar Range and onward to Inverell. How did it feel?

Nathan Elliott: “It was certainly cold and windy, you hit the nail on the head there… once we got over the range it was a block headwind and pretty freezing. Everyone was going back for their jackets and stuff. It was a contrast to the last few years.”

…You’ve done The Grafton five or six times, is that right?

And so there are hopes and aspirations. How did it feel to finally pull off the win?

“It was pretty special. Since the first I rode, it I’ve always wanted to win it.

“It’s one of my favourite races and I’ve been trying every year. So to finally crack it this year… I was pretty over the moon.”

It gets the title of a ‘Classic’, and I’m from Coffs [Harbour] so I understand the heritage of the event. It does feel like a Classic, doesn’t it?

“It definitely is. That [race] and ‘The Warny’ are kind of the only two long one-day races here in Australia so it’s definitely like a Classic kind of experience.”

And you’re the kind of guy who is putting your name next to all of the big races in Australia. What’s next for you?

“I’m going overseas next week, actually, to do the Tour of Korea with my team, Bennelong-SwissWellness. From there we’ll head to Europe for a good one and a half months, and do some races mainly in Belgium and France.”

What’s that program like? We know that some of the Pro Conti teams get over there but we’re not really certain, once they vanish, what happens. Can you talk me through what that sequence will be in Belgium?

“We’ve had a group of guys over there since the start of April… and they’ve done a few tours in France but I’ll be over there doing mainly one-dayers. While I’m there for June and July, we’ll have maybe eight or 10 UCI 1.1 and 1.2 [races] and then we have a fair few pro kermesses as well to slot in between those.”

You’re showing yourself on the national scene. Do you think that you might ever warrant, for example, a selection in a worlds team… you know, let’s say Innsbruck was a course suited to you do you think that your performances would merit that?

“Oh, I’d love to do that but I think to get a gig there, I’d have to show a lot more internationally, I would have thought.”

At the age of 27, it sort of seems a little bit late to be asking if you’ve got greater aspirations. What is going to come of your cycling career?

“I don’t know. I’d like to, obviously, move to the WorldTour or something. That would be the goal but last year I was hoping to have a really good year but I had a really bad accident in January that knocked me out basically for the whole year.

“I didn’t get a real good chance to show myself so hopefully this year I can just put a good consistent year together and hopefully get some results overseas while we’re over there.” 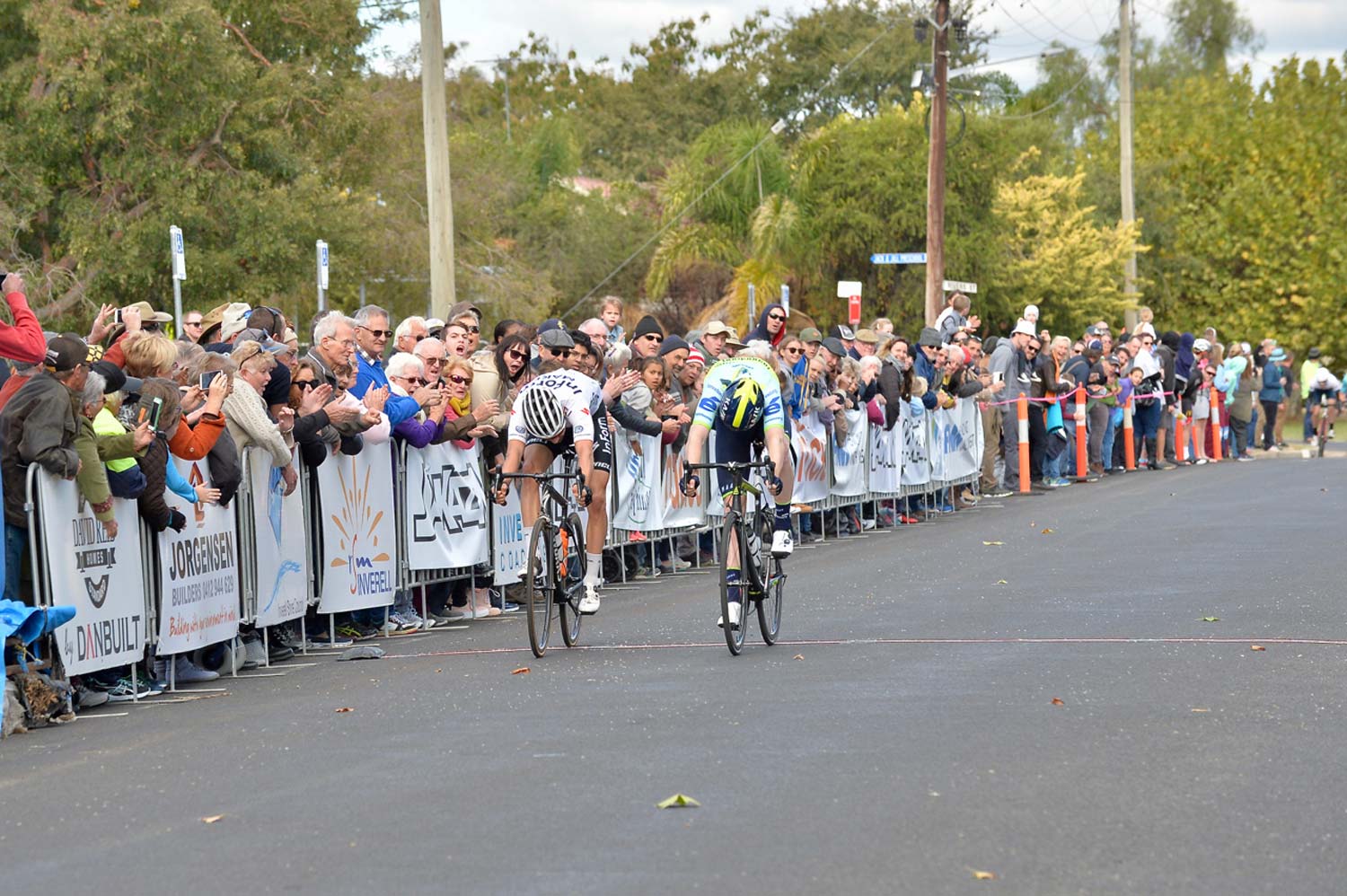 A close finish: Elliott just ahead of Raphael Freienstein (above).

I’m talking to you as someone who has a little bit of involvement with Bennelong these last couple of weeks and you can see from the support that (Bennelong CEO) Craig Bingham gives, that the company is committed to [the team]. How important is it to have someone like that backing your team?

“It’s massive – for this team and Australian cycling – to have a big company like that. Especially Craig because he loves cycling and he’s passionate about it.

“It’s all well and good to have someone who is throwing dollars at the team – and no caring – but he’s really into it which makes a fair bit of difference.”

On the actual management front, who is your main contact point at Bennelong-SwissWellness?

“The team owners are Andrew Christie-Johnston and Steve Price; Andrew deals with more of the racing side of things and Steve deals with all of the sponsorship and stuff.”

And what about ‘The Most Enthusiastic Man In The World’…? Do I need to actually name him? Or do you know who I’m talking about?

“Yeah, he coaches me so I deal with him a fair bit as well.”

When we talk [about] Mark Fenner, we talk numbers – so it’s time for me to ask the traditional question that I ask someone who has just won a big race: talk to me about the output. What system are you using and what were the numbers like on Saturday?

“So I use a Pioneer power meter and I think the absolute power numbers weren’t that great for a race like that because it’s so long. But I think I averaged, like, 275 [watts] for six hours 45 minutes and I think normalised was like 330.”

Well that gives us an idea of what you’re doing when you’re pushing into a headwind of 30 or 40km/h. Was it harder in the wind or up the climb?

“Ah, I don’t know. It was hard all day. The wind was hard but I think when I was away in the wind, we were kind of riding within ourselves to make sure we didn’t blow up.

“I felt good, so it wasn’t overly hard but we were going full gas just struggling to keep up at over 25 or 30km/h at some stages.”

Ouch. That gets pretty mind-numbing. We saw a pretty solid collaboration with you and Rafa. Was there talk between you two or you both understood that you had the responsibility of holding off the bunch?

“I attacked 40km to go because it was either, go then [from the early break] or get caught because the bunch was breathing down our necks and starting to close in – and the other guys in the break were getting tired. I knew we had to go then and I think he must have thought the same thing as well.

“We both had a fair bit left in the tank.” 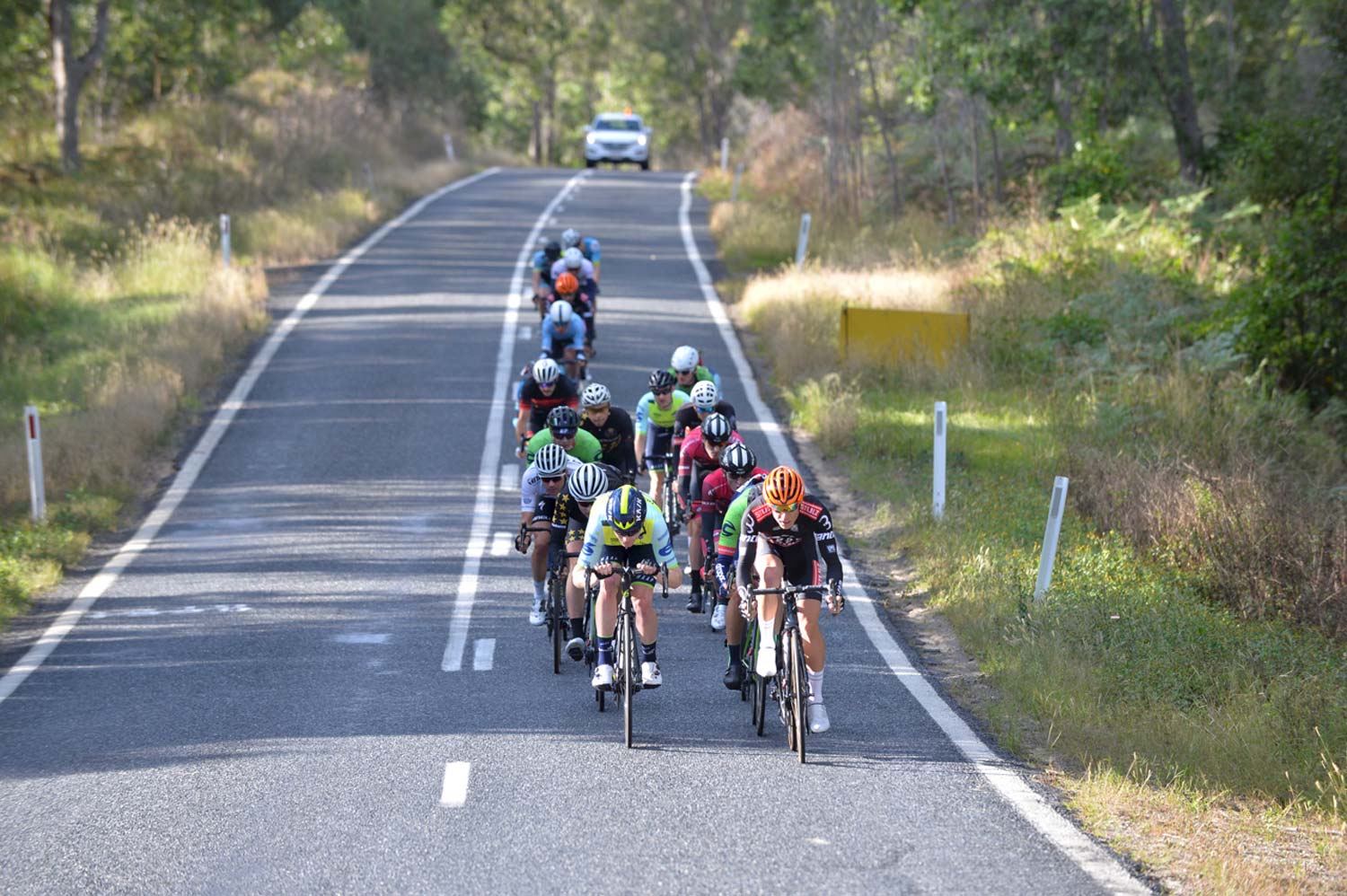 Up the range and into the wind…

Coming into the finish, to be honest, there was only bee’s dick between first and second and then the bunch was right down your neck. Did you think for a moment that it wasn’t going to be a chance of contesting the victory?

“Um, no. Actually I think we thought we had way more time to play around with than we actually did because, for the last few kilometres, there was a fair bit of cat-and-mouse going on. We slowed up a real lot, just mucking around and stuff.

“It wasn’t until about two kilometres to go when we looked back and saw the bunch – and there was a bit of panic. So, it wasn’t until the last minute when we actually thought, ‘Geez, we might get caught here.

“But we were lucky enough to hold on.”

And the vibe of the NRS? It’s just kicked off really; it’s taken a long time to get there and now there’s a big pause as well. Do you feel like it’s got the legs to get back up to the kind of series it was only a few years ago?

“Yeah, I think it does. They’re trying to make a lot of positive changes and I think, behind the scenes, there have been a fair few meetings going on with all the parties involved and it sounds quite positive.

“But, like you said, there’s a massive break which is a bit of a shame but, luckily for us, we head overseas – but it would be good to see some more racing.”

Well, that’s – more or less – like an intro to Nathan Elliott for RIDE Media readers. It’s nice to make your acquaintance and get to know a little more about you and I wish you all the best with your overseas campaign. 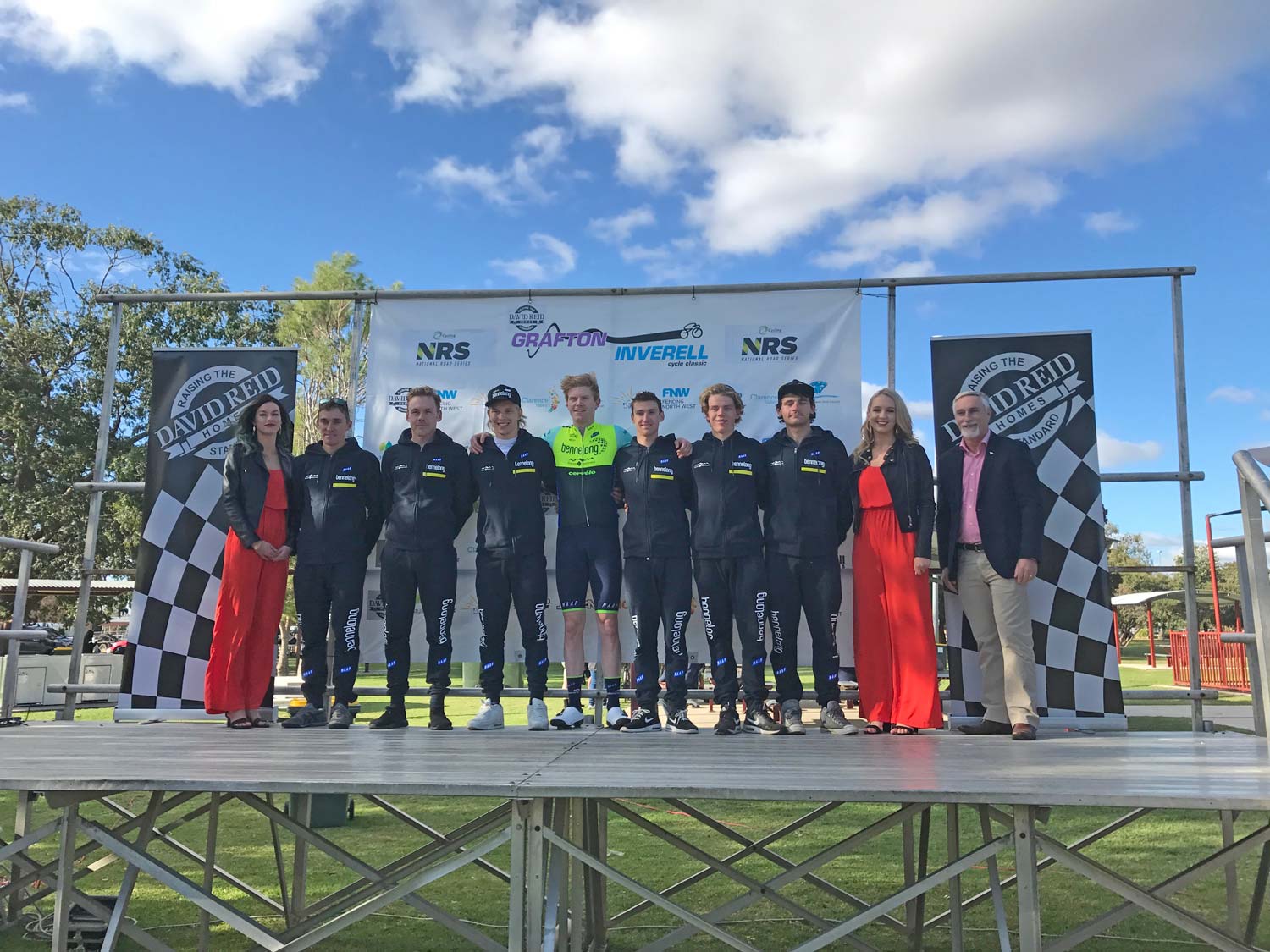