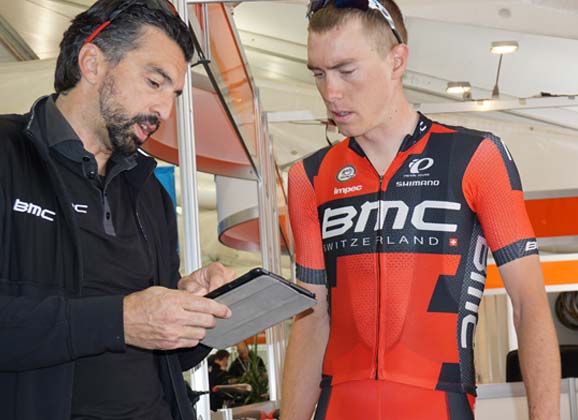 Rohan Dennis on the hour record

Once the London Olympics were over Rohan Dennis vowed that his track racing days are over. That’s true… to an extent. On 8 February he’ll return to the velodrome to take on the hour record. It’s a race against time. How far can he go in this prestigious competition that’s only result classification is an honour roll? Rob Arnold caught up with the 24-year-old to find out what he expects of the ride in Grenchen, Switzerland in three weeks time. 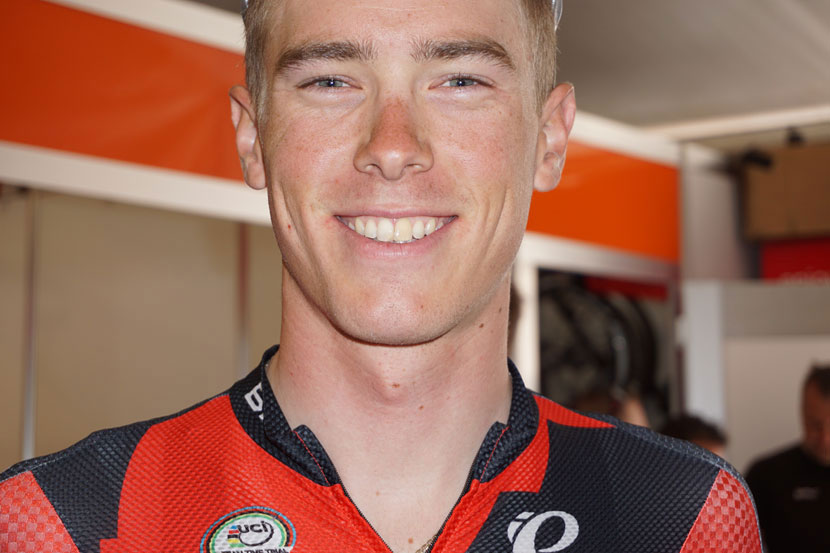 Click the Soundcloud file below to listen to the interview and/or read the transcript to see what Dennis has to say about the pending attempt at a most prestigious record.

On the record about The Record

RIDE: I just walked into the Adelaide Hilton and the first bloke I see when I’m checking in [for the 2015 Tour Down Under] is Rohan Dennis. We started talking about Grenchen, and what’s to come on the eighth of February. Before that, there are a few things to do. Give us a quick synopsis of the next few weeks Rohan…

Rohan Dennis: “Well, we’ll start before today. There was obviously the preparation for the nationals – the time trial and the road race. That went pretty well.

“I got second in the time trial and we didn’t get a [medal] result in the road race but it was a solid race: Cadel felt good, I felt good, Campbell Flakemore – being the neo – he was in every dangerous move and rode exceptionally well. He got to the finish. Eighteen laps isn’t easy even if you ride ‘easy’ around Buninyong, so for him to get fourth in that race was great.

“It was great to see him in that sort of form.

“Now we’ve got the Tour Down Under and, as I said, Cadel is in good form. Everyone else is also in good form and we’re hoping to give [Cadel] a good outing as his last WorldTour race and get him that big result at the end of his career.

“Then I just go straight to Switzerland and start really focussing on the hour in Grenchen.”

…I was saying when we reference the hour [record] prior to starting this interview that what would make it really interesting is if you don’t make it or you’re chasing the time. Have you done an hour effort before and do you know roughly how you’re going to be?

“I’ve never done a full hour [effort on the track] in one hit. Actually, that’s a lie. In Florence last year [at the world championships] in the time trial is the closest I would have got to that. It was an hour and eight [minutes]… or something. But obviously it’s different: lower cadence, it’s on the road – it’s completely different.

“It’s going to be new territory.

“I’ve done preparation, obviously, with longer effort on the track than what I used to do and they’ve been going really well. So everything is looking good, I just have to put it all together in one big lump on the eighth [of February].” 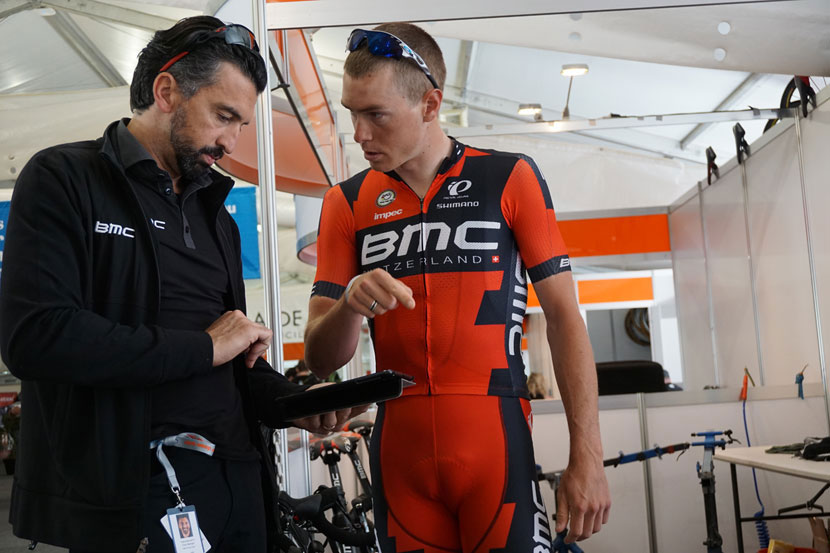 Rohan Dennis consults Fabio Baldato about where the BMC team will ride for a training session on the Saturday before the Tour Down Under.
Photo: Rob Arnold

What about your pursuit days – you must’ve done some long sessions on the track. Was there ever one where you… well, you never emulate an hour [record]… you just have to judge how you could be going.

“We’ve done some long track sessions in our day… the one I can really remember is 2008. We got the option: we could do either four by 10km or eight by fives in the morning. That was just one of the sessions we did that day in the teams pursuit.

“We had individual five kilometre [efforts] in the afternoon. That was a ‘fun’ day.”

How did you pull up after that?

“We had two weeks of that. I was fat when I went into it and I wasn’t fat when I finished. You could say it was beneficial in that way.

“I was a little bit fried at the same time.”

A lot has happened in that seven years though…

“It’s been seven years? Jeez. It’s been seven years! God, that makes me feel a little bit old – but I’m not, obviously. I’m only 24… seven years. A lot has happened! There were all the under-23 years in the Jayco-AIS [team] and one year at Rabo [development team], a year-and-a-half with Garmin and, now, the last six months with BMC. So everything has come along really nicely.”

Who is going to be calling it for you?

“I’m not actually quite sure. Obviously I’ll have my coach there, Neil Henderson. And I’ll have a lot of support from the team. I’ll have a couple of sport scientists – David Bailey was with the Great Britain team back in the Beijing [Olympic cycle days] so he’s got a lot of knowledge about track-specific stuff as well. That’s going to be a huge benefit for myself.

“Obviously we’ll have a lot of support in general so it’ll probably be Neil or David – they might even change it up.

“One hour of calling what’s pretty well [an extended] pursuit… it will get pretty mind-numbing.”

Do you imagine that they’ll be ‘walking the line’ [like many pursuit coaches do to give their riders feedback on whether they are up or down on schedule]? Or how will it be? ‘We need you to get up…’ They’ll almost be able to talk to you won’t they?

Is there any BMC tech that has been introduced? Is there going to be some special texting system or have you got any [cycle] computers planned or…?

“No. There’s not technology allowed.

“Obviously we’ll have the BMC bike as a pursuit position – a time trial position. But we aren’t allowed to have our SRM [power meter] in front of us, or speed, or even heart rate. There’s no information allowed in that sense…”

Can you wear a heart rate strap and transmit [to the support staff]?

“We are allowed to do that.

“Basically we will have the data there. I’ll either have it on the back of my seat or it’ll be a real-time [transmission] to the centre of the track – they’ll be getting updates on that sort of information. And they can probably relay it to me in some way but there are also rules as to how much they are allowed to give me. I’m not one-hundred percent sure on what that is but I’ve heard there definitely are rules on it.”

The hour has caught a lot of attention in the last few months really. It wasn’t that long ago when it was The Big Target. What do you know about the history of the hour? Have you tracked it?

“Not at all. I know as much as the everyday punter out on the road.

“I do know that, obviously, the ‘superman position’ used to be allowed, the same as the individual [pursuit] and any track event. It was pretty well ‘open’. There were some small rules but guys like [Graeme] Obree and [Chris] Boardman had a big battle back in the day… there’s a movie on it.

“That’s as much as I know about it.

“Other than that, obviously there was Merckx, in the standard position, who had the record. But this is a new-age way of doing it: making it more accessible to guys who do time trials on the road or just do track in general. They don’t have to try and go into any different position that what they do race on already so that’s sort of unique in its own way.” 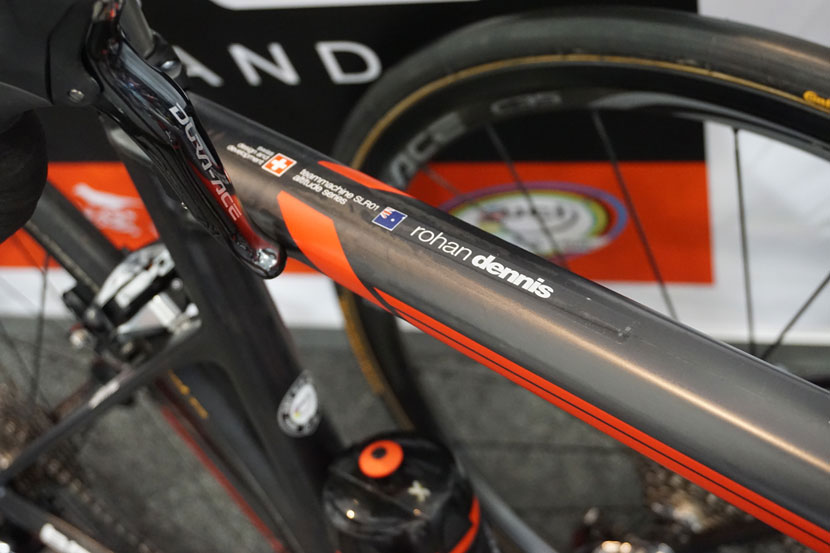 What gear do you anticipate you’ll be riding? You would have explored that already.

“Ah… yes and no. I have a little bit but I’ve not actually ridden those gears. It’s that I’m riding smaller gears but at a slower pace.

“It’s still the same power but slightly slower or I go above the cadence in general to make it that when I do get on the bike and actually race it doesn’t feel like I’m spinning my ring off… [so that] it’s a little more comfortable.

“The gearing obviously won’t be huge because you don’t want to be getting bogged down on the track after, probably, half-an-hour.

“It’s probably better to keep the legs a little bit fresh – as fresh as you obviously can. It’s not going to be as easy as changing a gear but you also don’t want it too small because you also want to have kids when you’re older, I guess. And you would possibly also want to sit down for the next week.

“It’s a fine line. It will be a bigger gear but not too big.”

And crank length? I’m curious about that. What’s the standard for you on the track and what will it be for the hour?

“Standard for me on the track when I was racing was 175mm and it’s the same on the road for the time trial.

“I’ll keep my position and crank length exactly the same as my time trial. Obviously it’s another thing where it’s a fine line between aerodynamics and comfort over that distance. It’s different to road because you can’t just get out of your saddle and stretch your back out or your legs.

“[For the hour] you’re in one position and you want to make sure you can hold that position the whole time.”

I know you’ve done a lot of work, even in the wind tunnel, and making sure that your tuck is great. In the TT [at the nationals] your position looked fantastic in the photos… you’re pushing your helmet into your back. You’ve got a great stance. Is it going to much different [for the hour] and you’ve done hour-long training in that stance before haven’t you?

“Yeah, I’ve done long training. I’ve actually been on the time trial bike a couple of times for four, four-and-a-half, and I think once five hours when I was younger.”

But fully in the aero position…?

“No, not in the full aero. Usually we won’t do a full hour. We’ll break it up but it’ll be an hour or more in total in that aero position.

“The position on the track will be the same [as I’ve ridden in the past]. I’ll try and keep it as natural for me as possible and something that isn’t out of my comfort zone to get me through, physically, as best as possible.”