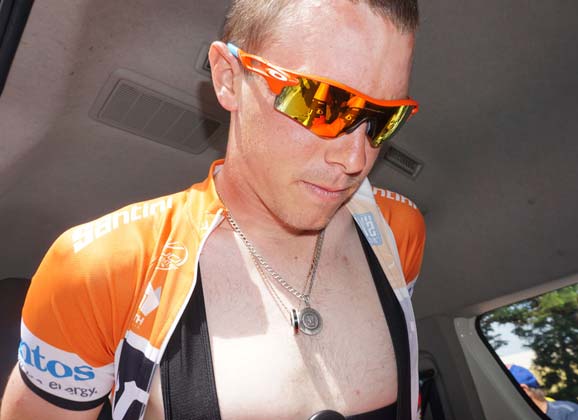 Rohan Dennis: talking about his win…

Thirty minutes before the peloton rolled away from Glenelg for stage four of the 2015 Tour Down Under, Rob Arnold caught up with the new race leader, Rohan Dennis, inside the team van. 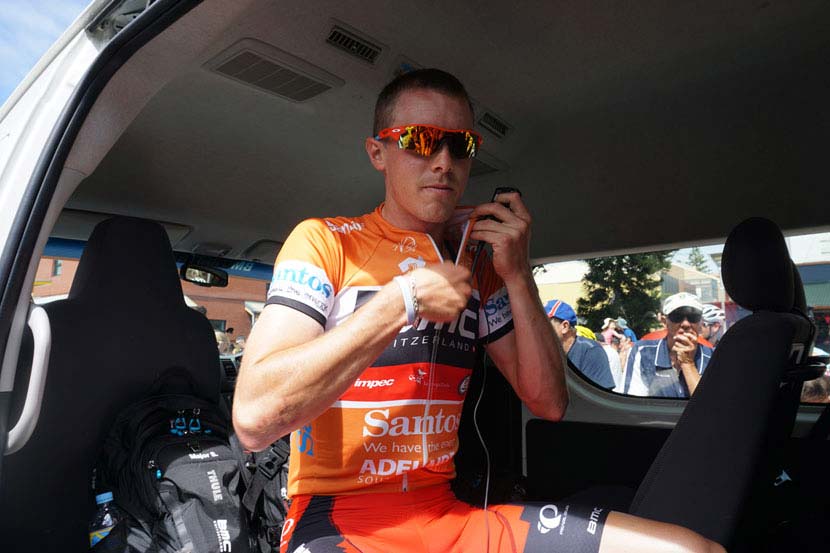 We begin the discussion talking about the fact that Dennis reached the base of the Paracombe climb at the end of stage three as last man in the peloton.

RIDE: I’m here trying to avoid the speaker and have a chat to the leader. I’m with Rohan Dennis after he’s won stage three and about to start stage four… last wheel [of the peloton] going into the climb [at the end of stage three] and then you’re first over the line.

Rohan Dennis: “Yeah, it was a little bit hectic coming down the gorge through Cuddly Creek and to the bottom of Torrens Hill Road. I thought there was probably more to lose than gain by stressing and possibly crashing… there were people taking risks they didn’t really need to take, I think.

“I thought, ‘Oh, obviously I’m going to hurt myself by starting towards the back of the bunch but I won’t be in the red before I hit the hill…’

“There are a few bonuses for being further back: less stressed and I’ll have a target to aim for as I’m going up the climb. And it worked out.”

So it must have been like a [David] Moncoutie style climb where you’re going past everyone in the peloton… or did you sort of pace yourself to that point when you hit out and attacked? How did it go?

“Really, I was just making small goals along the climb.

“I really didn’t think I was going to make it to the front and I was thinking, ‘Okay, top 10 and I’ll be pretty happy with that considering I started at the back.’

“I didn’t have the nerve to stay at the front. I felt sort of bad because I was supposed to attack at the bottom for Cadel and put the other GC contenders under pressure for him… but it ended up working out the complete opposite – that I attacked and the same sort of thing [happened] towards the end.

“We went one-two, so you could probably say it worked out even better than what we actually planned at the start of the race.”

It is my understanding that when Cadel saw you in the tent [behind the podium] straight afterwards that he said something along the lines of, ‘You’ve done what I’ve told you to…’ is that correct?

“Yeah. He said, ‘You finally listened to me after six months and it worked…’

“Obviously it was a bit of a joke. We have a bit of banter between the two of us; he’s the old guy – about to retire… he doesn’t like the word ‘retire’ because it’s a lazy word but I keep reminding him that he is retiring.

“And he keeps telling me I’m a ‘young little…’ something. [He refrains from using the word but laughs.]

“It’s obviously all in good fun. We get along really well. I enjoy being around other Australians in the team…”

I get the impression that you’d be rooming with Campbell [Flakemore]. Is that right?

So it’s an empty room now…

“He should be coming back today – [he is] out of surgery so I think that went really well.

“I’ve looked at my history in the team so far and everyone of my room-mates since I changed in August, no matter what race it was, something went wrong for them. So maybe I should start rooming solo… or it’s just that coincidence that my team-mates get a little bit of bad luck and I seem to come out of the races unscathed. But, touch wood, I do have a smooth run to the end of this race.” 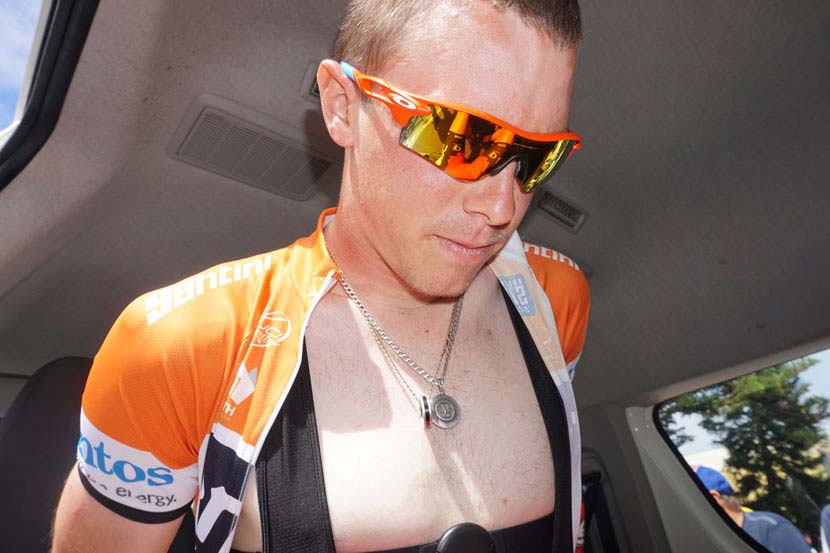 I have a little dream scenario. I ran it past Andy [Rihs] this morning and I’ll run it past you…

On Willunga, it’s you and Cadel up the front – as you’d expect… Richie is there and then the pair of you get about 10 seconds on everyone and you race to the line together and just as you come to the line and you could win as the race leader, you go: ‘No, stuff it…’ and you hand him the lead. He takes the time bonus and wins the last stage race of his career.

What do you reckon of that scenario?

“I think he would probably be pretty emotional.

“If we could do that I think that would be probably the most respectful thing I could possibly do for him and for what he’s done for the sport. I think he would be forever grateful.

“What happened yesterday was the first time we [BMC] has ever gone one-two at a WorldTour stage and if we did it again on Willunga I think Andy would probably just about start having a party on Willunga. And ‘Och’ as well.

“That would be a dream scenario.”