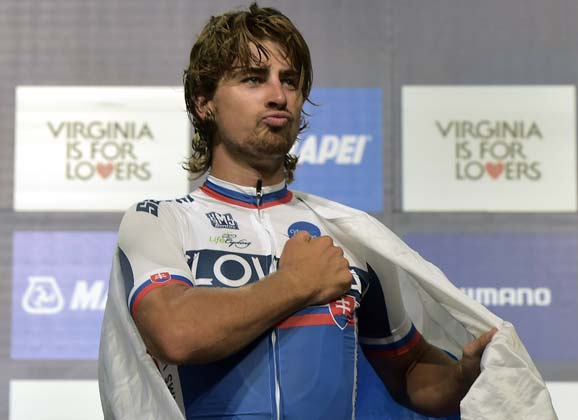 Sagan: “We have to change…”

He’s the world champion and Peter Sagan understands that he can use the attention lavished on him as a cycling star to try and influence what people think about… at least that’s some of the sentiment that came from his first comments after winning the race in Richmond, Virginia on Sunday. Here is a transcript of the exchange Sagan had with Sebastien Piquet… 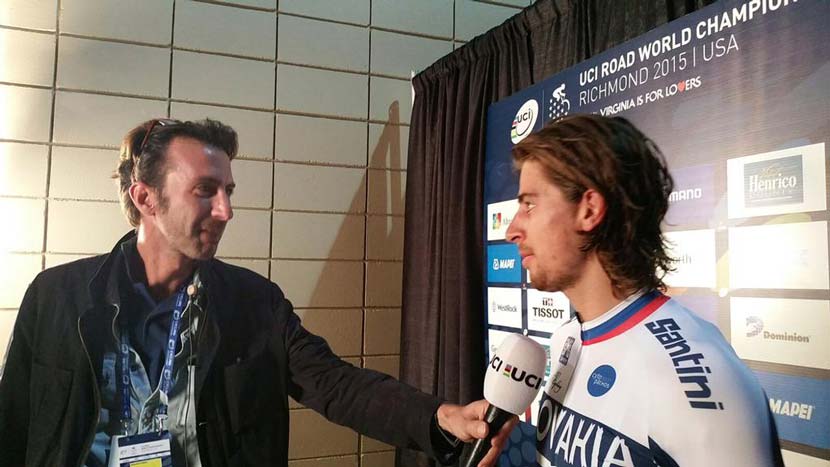 Peter Sagan, you’re the world champion. This has to be the best day of your cycling career.

“Yeah I think it’s the biggest victory and I’m very happy because I did a lot of sacrifice this, ah, last three weeks after the Vuelta. And it’s unbelievable for me.

“I want also to say… okay, I’m very happy for this. I was founding motivation in the world and I think it’s a big problem also in Europe and, ah, all this stuff that’s happening.

“I want to just say, because this was very big motivation for me – I want to win today – and say this thing: the population in the world, we have to change because I think in the next years it can be all different.

“And, ah, also I think this competition and all the sport is very nice for the people and we are motivation for the people. And I am hoping we can do this sport also next years and in the future because the situation is very difficult.

“Then I want to say all the people, like for change in this world.”

In terms of the race, it was the perfect plan? It went exactly as you had planned?

You took off exactly when you wanted? It was exactly what you had planned?

“Yeah, the race was very strange and ah, today I was just waiting, waiting and I had my brother with me – Juraj – and my friend Michal Kolar, my team-mates and they was always with me. If something happened they was ready to change the bike or something.

“But after the last two laps, I was a little also crazy. Like, I said, ‘Everybody has to be tired, no?’ After 240 kilometres. And then I just eat all the gels that I had and I was hoping for a last cobblestone climb. And from there I did… I was full-gas until the finish. Because, also, if the group take me I was very tired for the sprint.

“I did just one attack and it was, I think, the right attack.”

Can you believe that you’re going to wear the rainbow jersey for the whole season? That must mean so much to you.

“Well, I saw also a lot of comments on… like, the people [say] I’m not good for the long race and this. But yeah, now I have this jersey and I hold it for all next year.”