Jethro Nagle from ‘The Press Room’ recently caught up with Sarah Gigante for a podcast in which they speak about taking on racing in Europe, the Tokyo Olympics and  looking ahead to the 2022 season with Movistar.

Twenty-one-year-old Sarah Gigante will start 2022 in new team colours. In January she moves from Tibco-Silicon Valley to the top-tier of women’s professional cycling after signing of a three-year deal with Spanish Women’s WorldTour (WTT) team, Movistar.

During a recent episode of The Press Room Podcast, Sarah revealed that, despite her dominance of the Australian road racing scene – which saw her win the national road race title and back to back national individual time trial titles – her first 18 months as a professional in Europe has been anything but easy.

“I remember when we flew to Italy for Strade Bianche, we were the only people on the flight – [it was] just our team.

“At the time, Italy was the place not to be and we were just flying in there thinking like, ‘What are we doing?’ Within a few hours of landing in Italy, the race was cancelled and we had to fly all the way back home which, for me, was straight into lockdown in Melbourne.” 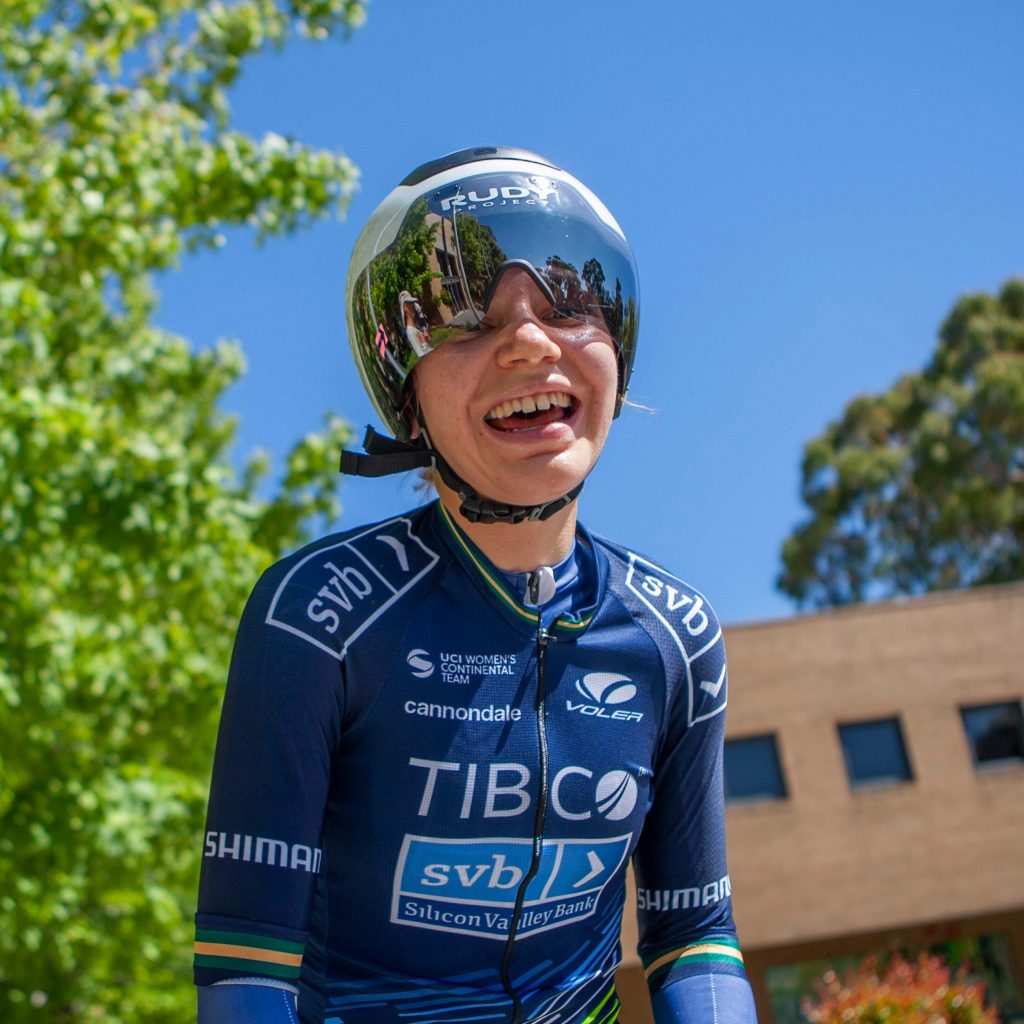 Once she finally made her way back to Europe, the races she did manage to start provided her with a baptism by fire. “Classic Belgian flat races” were on the menu and the competition even tougher, she explains.

“I learnt lots of Italian swear words. Everyone is really hardcore in the peloton – I think you have to be! If you want to get anywhere near the front on a regular basis then you really have to get those elbows out.

“People just do whatever they can to get there. It’s a super high level, I have to say when it comes to both the strength but also the willingness of the girls to do anything to get to the front.”

One would hope that Sarah’s part-time study of linguistics at the University of Melbourne, would come in handy in the European peloton, but as Sarah cheekily put it, she didn’t think so.

“I don’t actually understand what the girls are saying but I can just tell that they are swearing at me.”

Becoming accustomed to the aggressive racing and stronger European riders were not the only things Sarah was getting used to, she explains the number of riders in the race was a big change for her.

“I think it’s quite common for Australian women to struggle when they first go over to Europe just because of the size of the peloton.

A typical NRS (National Road Series) race would have around 50 riders and then you get to Europe and there are 150! So, it’s much harder to get into that top 20 in the bunch at these European races.”

One result in 2021 did stand out; Dwars Door Vlaanderen (DDV), where Sarah was 11th, finishing in the small chase group just 19 seconds behind the eventual solo winner and soon-to-be team-mate, Annemiek van Vleuten.

Sarah says that finishing ahead of big names like Paris-Roubaix winner, Lizzie Deignan, was a key factor in building her confidence on European roads.

Breaking bones before setting up a Euro base

Following her breakthrough ride at DDV, Sarah faced her next challenge when she crashed out at La Fleche Wallonne breaking “my leg, collarbone and elbow all in one crash”. As she explained, albeit somewhat jokingly, it was perfectly timed for when she would be moving into her new apartment on her own.

“It was actually five days after the crash that I was moving to Girona and I was going to be living by myself. It’s not far from the city but I mean, I wasn’t expecting to have a broken leg when I was organising it earlier in the year!

I was only a few kilometres from the supermarket,” she says of the new set-up in Spain and how she eventually got chores like the shopping done. “I had crutches, but I remember at the time how hard it was trudging back from the supermarket with my groceries… on my crutches, being like, ‘What am I doing here!?’”

Fortunately, now Sarah is happy to share that she is living with her ex-teammate and fellow professional, Kristin Faulkner, who rides for Team BikeExchange. Sarah makes a point to offer some advice to any young pros making the jump to Europe.

“I now live with Kristin Faulkner. She’s American and it’s so much better to live with someone else.

“I think that’s some advice I have to any young pros moving over to Europe; it’s better to not be on your own… I found living with someone else is nice, especially in the downtime between races and, when you are a long way from home, it definitely makes it easier being away from family.” 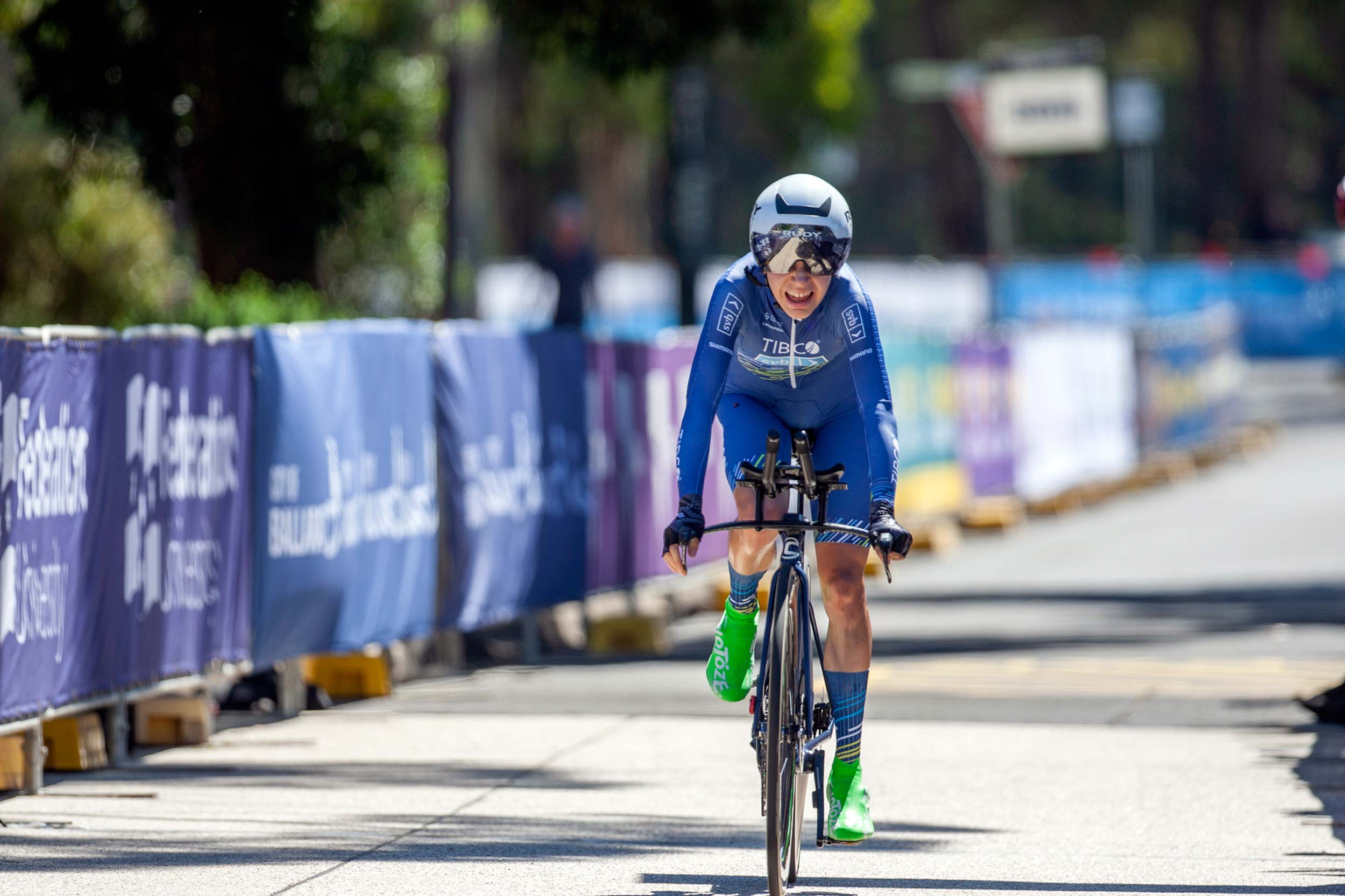 After recovering from her injuries sustained from the crash at La Fleche Wallonne, Sarah explains her elation when she was selected for the Australian Olympic Team for the Tokyo Games.

“It was pretty surreal! I still remember the day I found out that I was going to the Olympics. They [Australian Olympic Cycling Team] notified everyone on the long list that they were going to receive a call in a few days and told if you made the team or if you missed out.

“I sat down next to my phone all day thinking, ‘Please call me with good news!’ But also, ‘Please don’t call me if it’s bad news!’ I really wanted to know but I was so nervous. When Rory Sutherland [Elite Road Coordinator] finally called to tell me I had made the team, I could not stop beaming! I rang my mum and my brother and my coach and I just couldn’t stop smiling.”

It was a dream made into reality for Sarah who, surprisingly, was never confident on being selected.

“I had always dreamed of going to the Olympics and I really didn’t think it would even be possible… I was on the long list in 2020 but I was told I didn’t have a chance, so this year I really doubted it…. it was crazy, and I was so stoked.”

When asked what the experience was like competing at her very first Olympics at the age of 20, Sarah’s youthful excitement was evident as she described some of the kit she received.

“We got so much swag, I think that was the coolest part,” she says of the Olympic experience. “Lots of kit – pretty cool kit, I have to say – and lots of casual clothes. We even got given a Samsung phone with the Olympic rings on the back!

“We also got little pins or badges to trade with other athletes, although I was really bad at that because I forgot to bring them with me!”

When it came to discussing her performance in the ITT (in which she finished 11th), Sarah’s intrinsic and competitive drive to be the best, shone through in her comments.

“I think, at the time, I was a bit disappointed. I didn’t really know what to expect but definitely after a few days later I could be proud of my effort.

“Firstly, I put so much work in just to get there – I really left no stone unturned. I was determined to do everything perfectly in preparation for the Games. I knew when I lined up on that start ramp I could think, ‘No matter what happens, I am going to be proud of this.’”

Sarah explains that, although she was disappointed in her result, she took away a key learning from her first Olympic Games.

“Thinking about it now, the training for the games is a million times harder than that one day at the Olympics. On [race] day you just have to turn up and ride for half an hour and you’re on TV. So, I learned to reflect on the hard work that I had put in to get there, and be proud of that.”

No racing at nationals… but a quest for commentary position

As 2021 comes to a close and the next ‘Summer of Cycling’ is soon to begin, Australian cycling fans will be dissappointed to hear that Sarah is set to miss the 2022 national championships as well as the entire Australian cycling calendar, as she recovers from illness. She does, however, have her sights set on bigger goals in her first year for Movistar.

“I’m really sad to miss nationals,” she says. “I just love Buninyong so much. I’ve had a pretty good streak there winning as an under-19, and-23 and as an elite, and I’m heartbroken that I won’t get to defend my TT title – but I’ll be back!

“I’m also trying to get into the commentary team so maybe I’ll get to do some special comments with Matthew Keenan.”

As for her 2022 season, Sarah explains she is just happy to race anything, although she was keen to highlight one race, and the biggest of them all.

“I’m not actually sure if I will get picked yet, because Movistar is a pretty strong team, but I definitely want to get picked for the Tour de France Femmes. Hopefully, I can be back to full health and get selected and have the chance to race up La Super Planche Des Belles Filles and be Anniemiek’s domestique!”

Australia will miss Sarah during the 2022 Aussie summer of cycling however, it’s necessary to ensure she can recover fully from her illness to be back in top shape to continue her development into the top-tier of women’s professional cycling in 2022 and beyond.