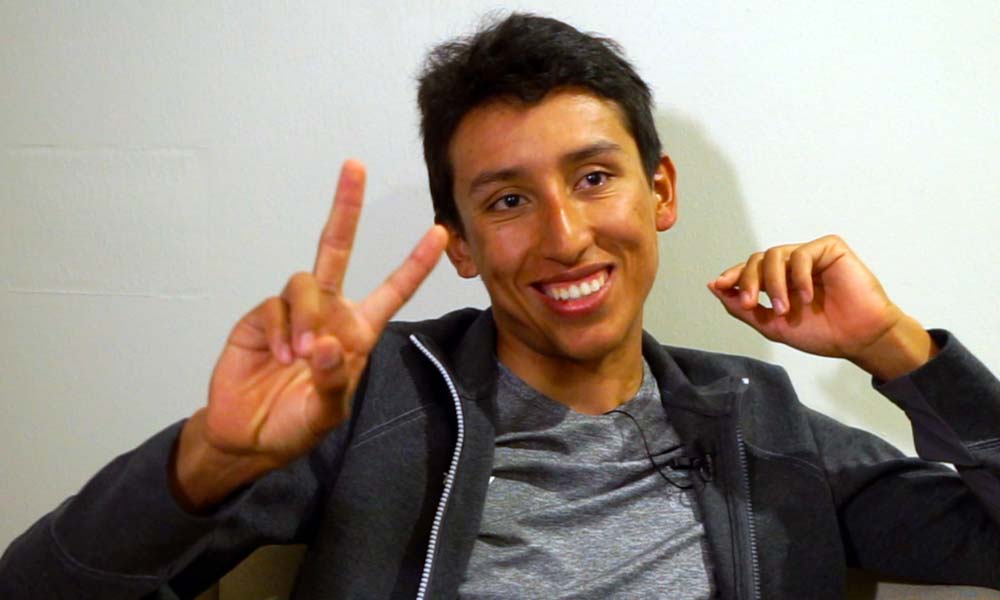 He comes with a big reputation but Egan Bernal is one of the younger riders in the WorldTour peloton but he’s determined to make a go of the chance he’s been given by Team Sky.

Midway through stage one of the opening day of the 2018 WorldTour, when the Santos Tour Down Under peloton raced from Port Adelaide to Lyndoch in the Barossa Valley, there wasn’t a great deal of action. It was hot. The Early Break had gone. And plenty of water had been drunk in advance of what many feared would be another day of brutal temperatures under the Australian sun.

In other words, there were plenty of toilet breaks. And so, if you happened to find yourself in the convoy following the race, there was ample opportunity to see the riders pedalling along in ones or twos – sometimes threes or fours, or even larger groups.

Later they’d picked up the speed and race hard but early on, it was fairly casual.

During this time, one rider came by the car I was sitting in and his position was elegant. With his hands in the drops of his handlebars, he sits high on the saddle and pedals with such grace that he stands out. Dark, slim legs and a perfectly straight back and his head tilted at just enough of an angle for him to see the wheel in front and the vehicles he and his team-mate were weaving through.

He made riding at 50km/h seem so easy, so effortless.

It was Egan Bernal. And I immediately asked Team Sky for an interview. The answer came shortly after I sent my text: “Tomorrow, at 8.00pm, is that okay?”

Yes, that’d be fine. Thank you very much.

– To watch the interview with Egan Bernal, click the link below. –

Watch RIDE’s interview with Egan Bernal, click the link above.

Of course I’d heard about him before, even seen images of him on the TV. He didn’t just race the Tour de l’Avenir – perhaps the only race in that young rider league that’s broadcast internationally – he dominated it.

Contested in the French Alps, it had plenty of climbing but not as much as some previous editions. Nonetheless, the 20-year-old Colombian found himself with an opportunity to show off his form. He duly did so. He got noticed. He got the pro contract. And the rest, as they say, is history… in the making.

Going on a tradition for winners of the Tour de l’Avenir, it shouldn’t be long before we see his name at the top of the results sheet.

He has a background in mountain biking and although, as a teenager, he was more focussed on his studies than his cycling, he is now racing a bike for a job. He would turn up late to classes – “only three or four minutes” – because of training and his university suggested that it wasn’t great that he try to be both a bike rider and a student.

His parents and others around him suggested that he “give it one year” on the bike – and see what happened. A silver medal in the junior worlds in 2014 sealed the deal: he’ll race, and study after – or during – his pro career.

It was a pleasure to meet him and immediately jump into an on-the-record discussion. I hope you like the interview and learn a little more about this rider you’re likely to see a lot more of in the coming years.