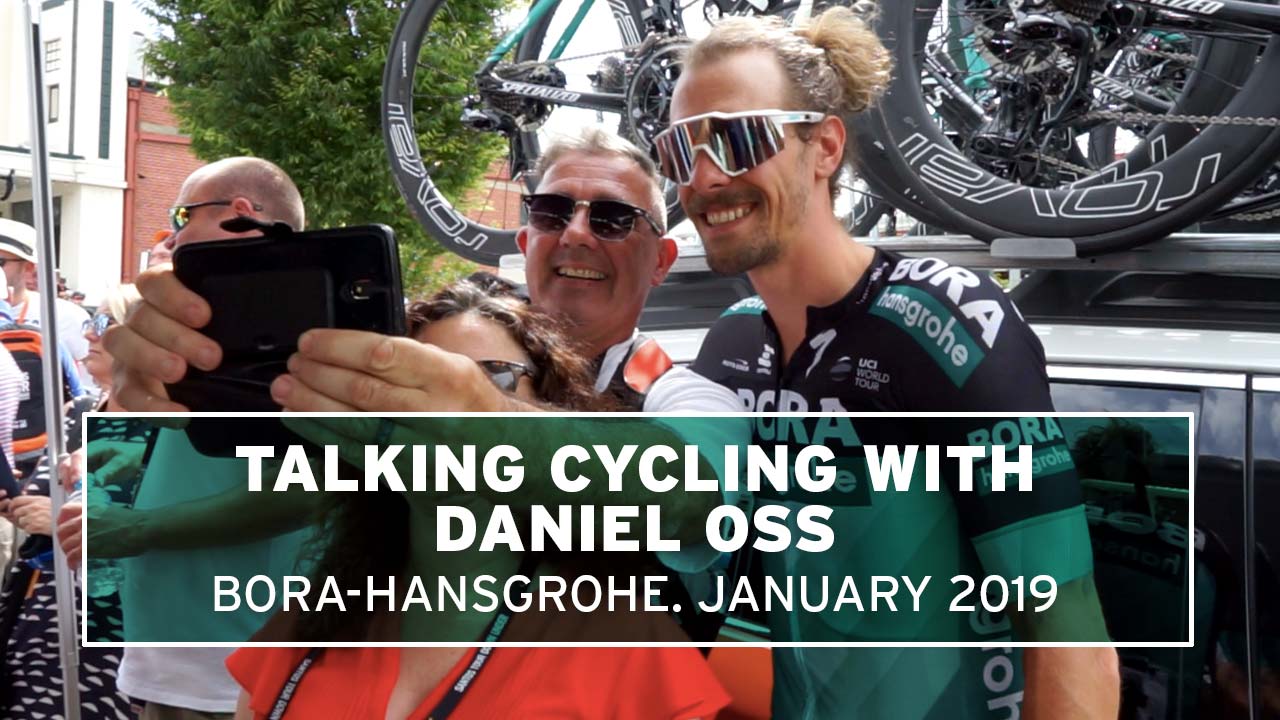 In one of many extended interviews from the 2019 Tour Down Under, Daniel Oss talks about life as a team-mate of Peter Sagan, the trappings of fame, his appreciation of music and a project he started two years ago called #JustRide…

Let’s start with the basics, I say at the beginning, how did you come to cycling?

He smiles, looks out of the corner of his eye and tells me: “Once upon a time…” And then laughs.

This is an interview that covers a range of topics, some rather rudimentary pro cycling questions, others a little more obtuse. Ultimately though, we talk about cycling and come to the conclusion that it’s something we love doing.

Daniel Oss is a larger-than-life character in the pro peloton, a genuine force on the bike, and an imposing figure when he’s not riding. With a rockstar aesthetic, it’s easy to pick him out from the crowd and, if you see him at a bike race, do say hello. You could be surprised at how easy he is to talk to.

Daniel Oss is a key rider on the Bora-Hansgrohe roster. He has raced Classics and Grand Tours with winning teams. He is respected in the bunch, and valued as a domestique. He has a passion for cycling that came from riding as a kid, rather than watching the sport, and although he’s paid to race, he still likes to ride his bike for pleasure.

During the course of the interview, he talks about what it’s like to be on the Peter Sagan Program, one race to the next with little reprieve from intense scrutiny – from the media and public alike. Oss explains that he cannot recall a moment he’s spent in public with his Slovakian mate when he hasn’t been asked for an autograph.

He recognises that there are trappings of fame but also benefits that come from being well recognised as a pro athlete.

Although a remarkable rider in his own right, Oss admits that Sagan is in another league altogether. It means that when they race on the same team, the three-time world champion gets – and deserves – leadership status… and that’s fine by Daniel.

One day, he says, he may get his chance to win and if it happens, there’ll be no argument from Sagan. It’s just a matter of finding the right time and the right place, the right form and the right tactical predicament for Oss to chase a bit of personal glory. But that’s not why he races. He does it as a job but also because he loves it.

The interview was meant to be just 15 minutes but we spoke for over half an hour. Towards the end, I told him: “we’re at full-time,” before adding, “anything else you want to talk about?”

Again he smiled and told me, “I want to talk about #JustRide.”

Tell us about it…

“Two years ago, after the Giro d’Italia, I was sitting at the sitting at the bar with my friend. And I was really, really tired – I was like: ‘Basta!I stop. I don’t want to see any bike, ever.

“But I was lying because I love my bike and I love riding my bike.

“And then, with him, I started thinking about a journey around Italy.

“So, we just planned a trip with a bag on the bike and I just went…

“I did around 200km a day and was, like, stopping for lunch, meeting people… you know, just enjoying what was around me. It was really: Just Ride.

“Last year, I did it after Paris-Roubaix and I went from Milano… to Rome – I went through Lombardia, to Liguria on the sea, then I went through Tuscany, also on the gravel road… and then I went down to some lakes around Lazio and I arrived in Rome, at the Colosseum.

“That trip,” he said of the original #JustRide adventure, “was really something for me, changing my mentality.

It was, I surmised, a rediscovery of the love of cycling.

For me, the reason I do what I do, is that I love riding my bike. It’s a pleasure, it’s meditation, it’s tremendous transport, it’s lots of things. If more people could ride their bike, it’s a better world. It’s that simple.

“So simple,” says Oss in response.

“I love racing. [Just Ride] is not because I want to quit racing because it’s really something that’s a part of me. I really like to compete with the others and arrive at the line.

“I like, also, technology about the bike and how you can [improve] your shape but also sometimes when it’s too much, it’s too much and you want to just relax a bit and enjoy what you do.”

Find out more, watch the interview, follow @Daniel87Oss on Twitter – and, of course, just ride. #JustRide. It’s that simple.