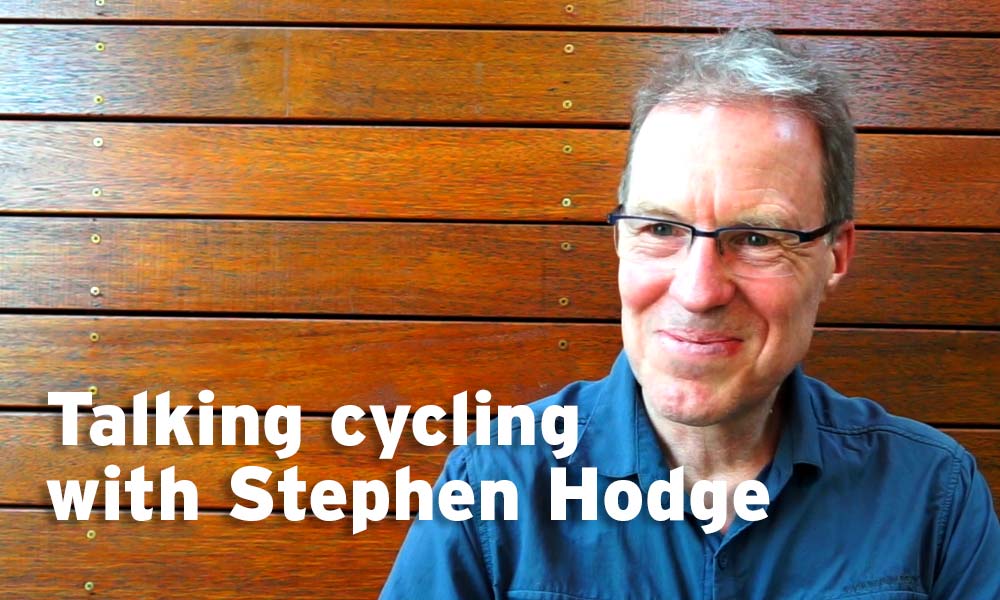 He raced at a time when pro cycling was largely ignored in Australia. Stephen Hodge continues to live the cycling life over 20 years after he stopped racing but now it’s all about lobbying. He hopes his work will make bike riding more prevalent than ever…

At the end of another long interview for RIDE Media’s ‘Talking Cycling’ series, this time with Stephen Hodge as the subject, I make a statement comparing the two things that he’s been most involved with professionally. “The legacy of Stephen Hodge,” I tell him, “is that, yes indeed you were a racer… but it’s your current job which is going to have a longer-term impact.”

“Oh definitely,” he replies, as always with perfect pronunciation and considered delivery.

“My pro career was fabulous. I wouldn’t change it for anything, but in terms of what’s really important in this world, it’s our children, it’s our safe travel around our cities, it’s changing the nature of how we move – mobility for a carbon-constrained future and a better planned city future [with] more sensible alternatives for transport than we currently have. And that’s huge…!

“If we don’t make these changes, we are going to have a seriously declining quality of life in Australia.”

Hodge has become a cycling statesman, an ambassador for bike riding who firmly believes in what he speaks about every day.

Summing up, I offer up some common sentiment shared by cyclists around the world: “The bike can, in fact, make [things] better – it’s a reality.”

Now a cycling lobbyist, Hodge responds appropriately and summarises why he’s doing what he does with the not-for-profit organisation, We Ride Australia.

“Well, it does already in some pockets of our cities,” he says of how cycling benefits society. “We know how to do it, we just need a more sensible investment spread between the different modes of transport – less on highways, more on public transport, more on cycling, more on walking…

“Our cities will be much nicer, they will be more liveable, we’ll have less air pollution, less noise pollution, and less traffic.

“Let’s not forget that the countries that have high levels of cycling are 50-60% safer in terms of road deaths and trauma than [Australia is].

“Less of us will be killed on the roads if we do this better.” 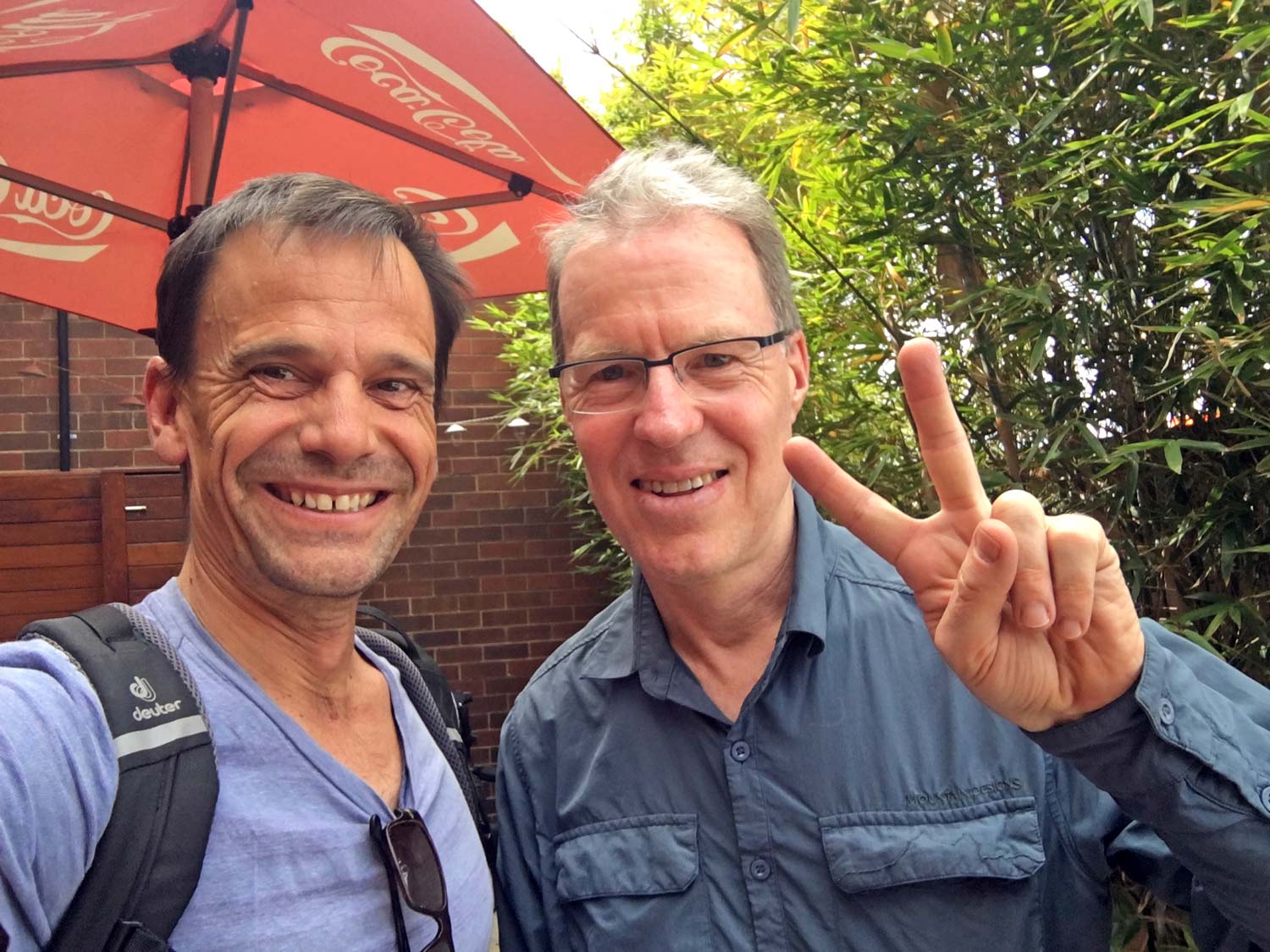 Rob Arnold and Stephen Hodge (above).

Stephen Hodge is on a mission to get more Australians cycling. He is doing it by living the example of a man in the modern world (often) capable of travelling by bike to get where he needs to go. He is doing it by speaking to politicians and explaining what relatively minor adjustments need to be made to our transport infastructure to enhance the quality of lives of many. He is trying to make cycling a more predominant means of transport while increasing the health of the nation.

He had a racing career that included multiple starts in the Grand Tours, an Olympic appearance, and plenty to gloat about. But he also competed at a time when a new form of doping was prevalent in the peloton. He too took EPO – and later paid for his indiscretion.

In 2012, while on the board of Cycling Australia and effecting considerable change on the local competitive scene, he could no longer live with his ‘secret’.

When the USADA released its ‘Reasoned Decision’ about the cheating life of Lance Armstrong, there was a general cleansing for many pro cyclists – Stephen Hodge was one of them. Instead of hiding from his past, he stepped forward at the age of 51 and admitted that he took performance enhancing substances during his racing career.

It didn’t net him any spectacular results but he was able to ply his trade, earn an income, ride his bike, and travel the world. EPO had an effect on his life but it wasn’t quite the miracle elixir that turned him into a champion.

Years after he took the injections, however, the cheating ways would catch up to him; he would become part of an infamous club known to many, quite simply, as: ‘Doper’. 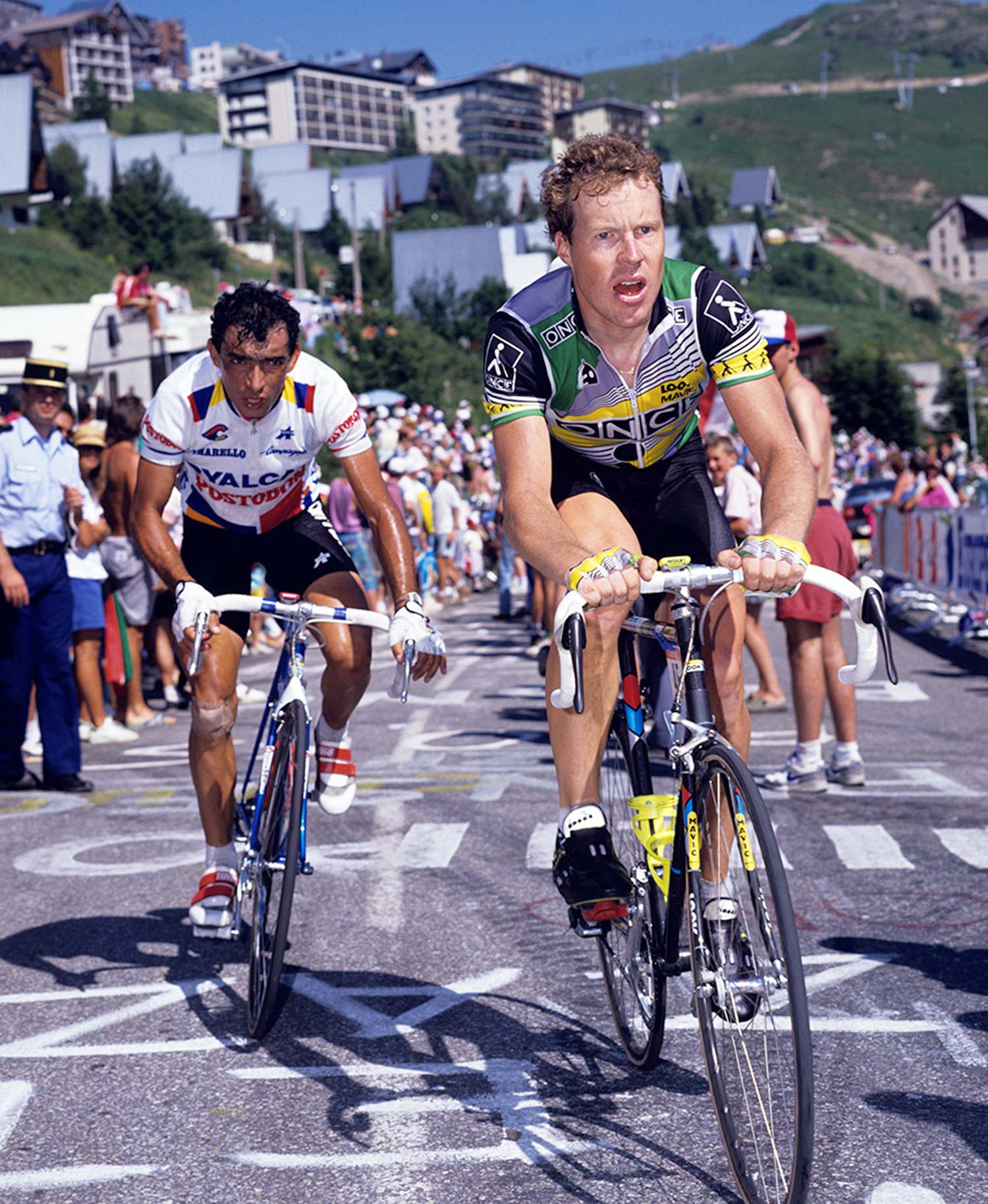 Hodge is the veteran of six Tours de France (above).

The EPO use didn’t define Stephen Hodge. “It’s something I did and I’ve got to live with the consequences,” he said at the end of our interview. “That means having to answer questions about doping even when I’d rather be talking about all the good work that’s going on in the cycling community.”

We Ride Australia is an initiative that is building towards a significant legacy. It is knocking on the doors of politicians daily to explain the many benefits of cycling, it is working towards making transport safer. It is also explaining that more people riding bikes is not only good for the planet, it’s good for the health of a nation.

Hodge’s riding group in Canberra is a “rolling men’s shed”, one of the best methods of mental therapy he can think of. Cycling serves the former racer – and his cohort of around 10 blokes who enjoy their riding – very well.

RIDE Media resumes the series of ‘Talking Cycling’ interviews after a long hiatus. As often happens, the discussion with Stephen Hodge covers many topics and we don’t rush him for a quick soundbite, a simple grab to summarise what he’s doing. In the beer garden of the giant Pushy’s bike shop in Fyshwick on the day of their famous carpark sale, we sat down, turned on the camera and starting talking… about cycling.

Watch the interview, listen to how Hodge sells his passion, consider some of the concepts raised, share it with your friends who may be cynical about the way cycling can be integrated into society to achieve better outcomes – and, of course – let us know what you think.

This is a discussion that was well overdue and I hope you enjoy listening to what Stephen has to say. 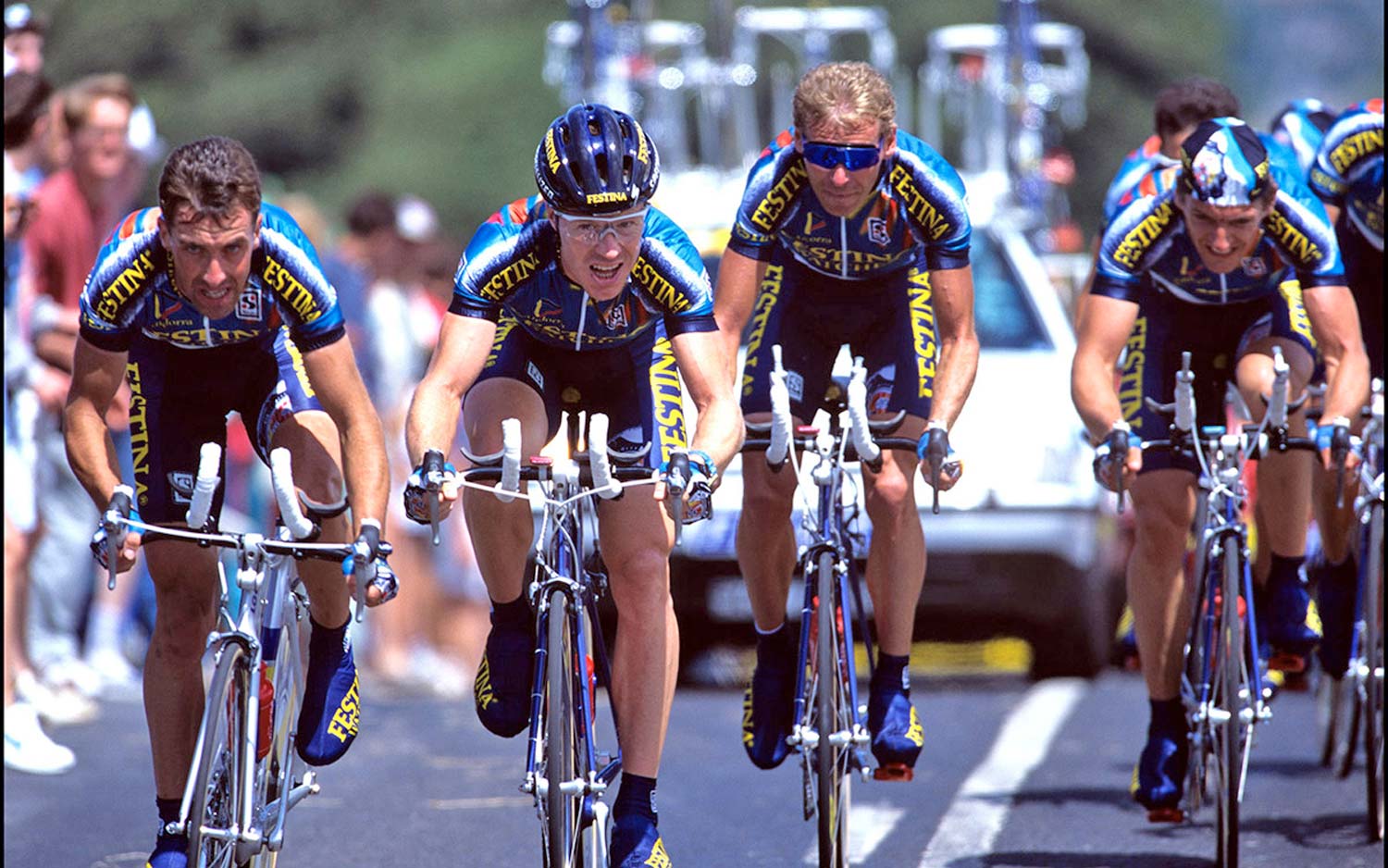 After years racing in the ONCE team managed by Manolo Saiz, Hodge saw out his racing days with the (infamous) Festina team (above). 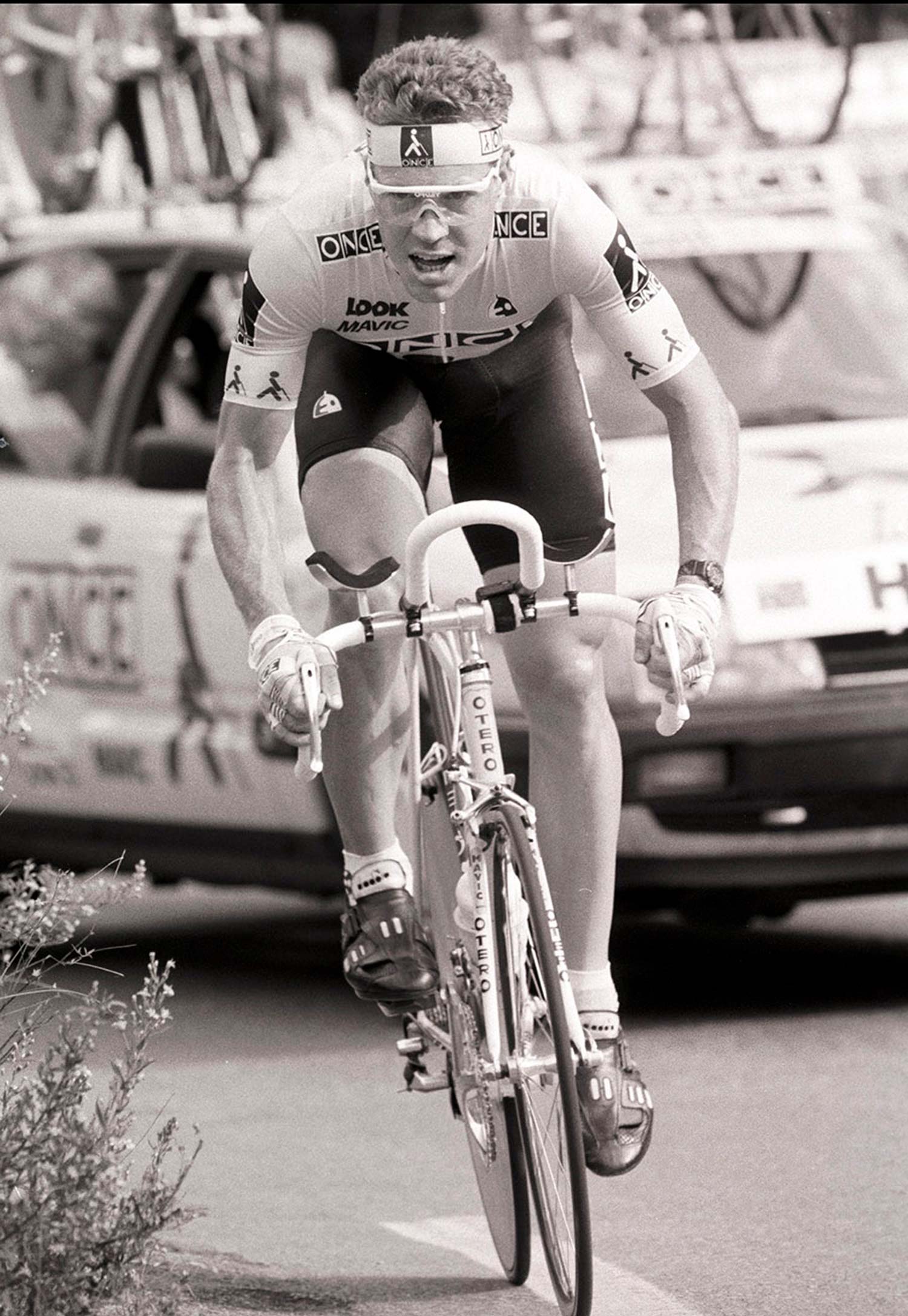