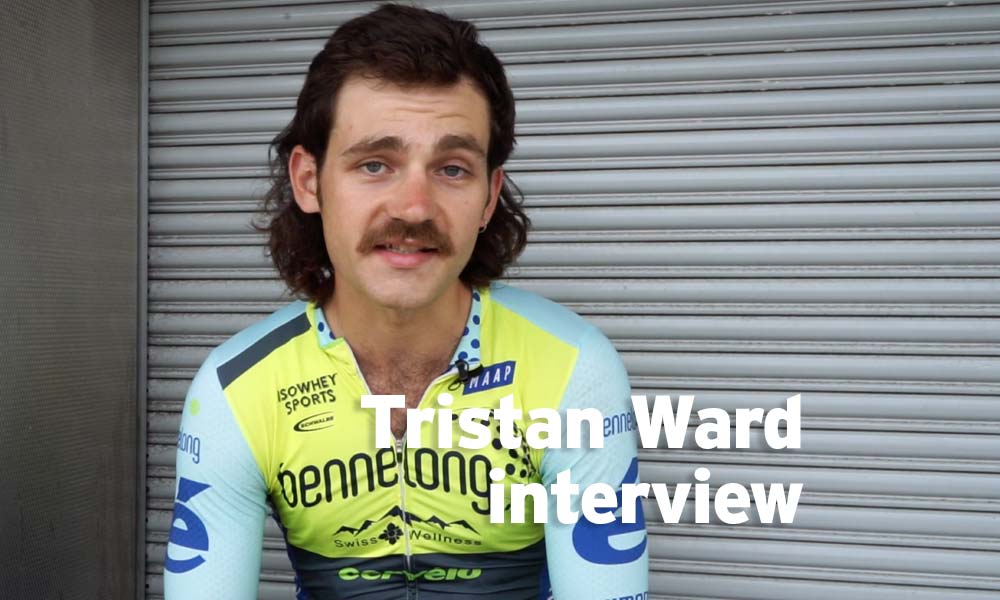 He finished fourth in the NRS in 2018, won a few races with his Bennelong-SwissWellness team, and likes to speak his mind about the state of racing in Australia. We talk to Tristan Ward…

It was an interview arranged with a minimum of fuss. Tristan Ward was obliging with his time and happy to help with a review of a new bike, as well as answer some questions about his experience in the NRS – and a few other topics relating to his cycling.

He is outspoken on some things and although the latest in the ‘Talking Cycling’ series of interviews starts out slowly, with Ward explaining how he came to road cycling from mountain biking, it builds up to some interesting observations about riding, racing, training, traffic and life.

– Click the link below to watch the Tristan Ward interview. –

Working hard for his money

At 23, Tristan Ward believes he has two more years to make a successful career out of racing or else he’ll have “to get a proper job”.

He’s not bitter. He doesn’t believe it’s his birthright to be a pro cyclist. He knows he’s got to earn results… and does just that, but it doesn’t always mean that he earns money, not as a racer in the National Road Series.

“I probably have until I’m about 25 to make money or I’ll have to retire from bike racing,” he says. “Unfortunately, that’s just the way it is.

“I’m just from an average family – nothing special, nothing terrible – so I’m lucky. But at some stage I will have to get a proper job if I don’t get paid for riding bikes.

“And the NRS is definitely not sufficient.

“For example,” he offers, “at [the Tour of] King Valley, I had quite a successful tour, coming third (in stage one), fourth (in stage two), first and first (in stages three and four) – obviously winning GC – and I took home $217.

“It’s a negative thing to harp on about prize money but if you want to keep us racing NRS, you should probably up it…

“That [prize money] didn’t cover my food bill that weekend.” 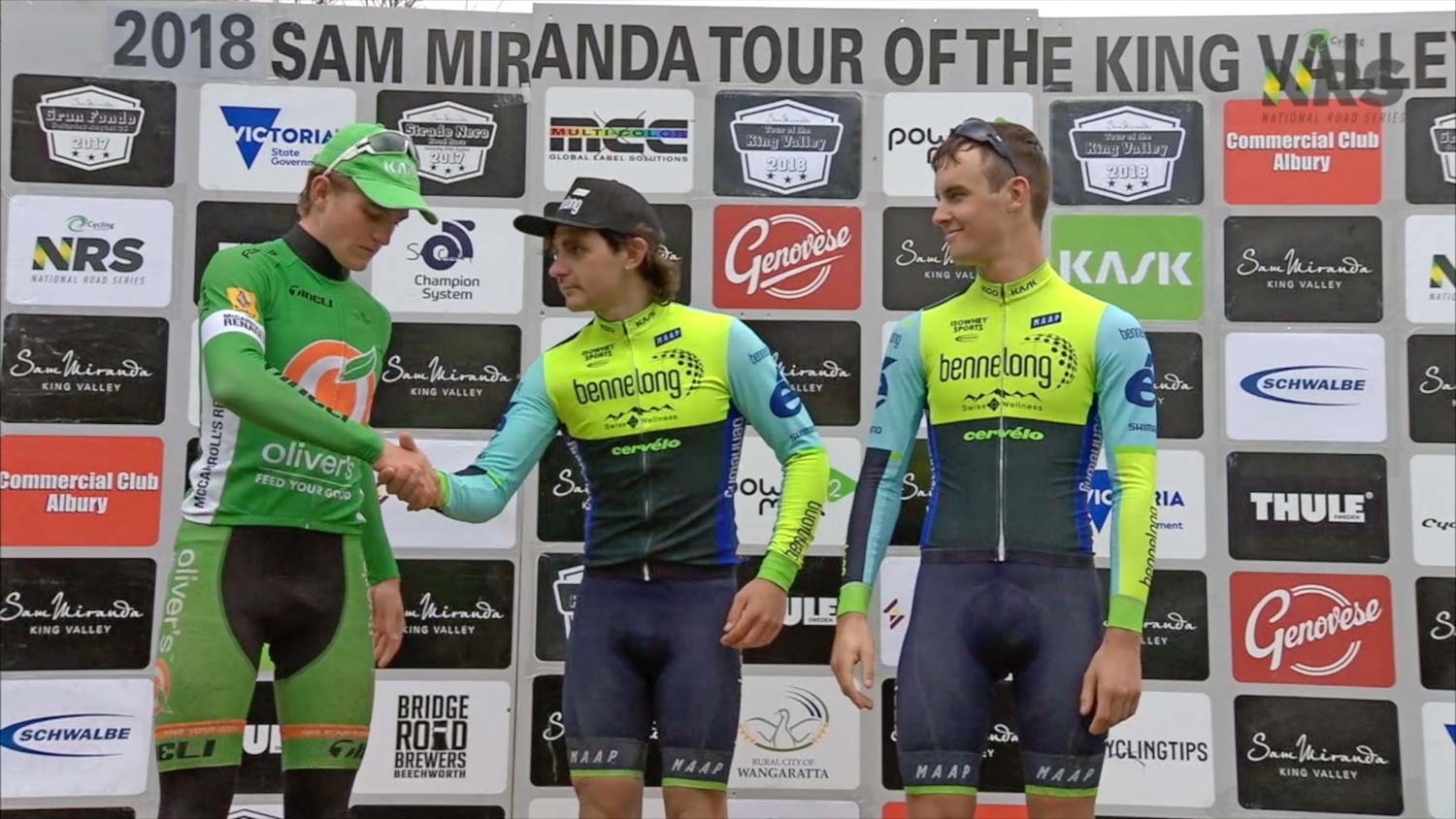 Enjoying podium time at the Tour of King Valley (above) where he won two stages as well as the overall title… and a grand sum of $217 for his efforts.

He came from mountain biking and says he’ll always continue to ride off-road but it’s on the road that he thinks he’s most likely to become a professional. He’s had a couple of seasons competing in the NRS and is grateful for the opportunities he’s been given thanks to sponsors likes Bennelong.

It is clear Ward wants to stay in the sport. He enjoys his cycling and, during the interview he offers numerous examples of what’s good about the sport. He also doesn’t mind talking it up and explaining why a teenager should look to bike racing rather than other options for their sporting activity.

“I try to be as positive as possible and don’t like people who are negative for no reason,” he says.

He explains how he likes racing and gets a buzz out of training. He talks about the good vibe of the cycling community and the friendships he’s formed. He clearly believes in all that the bike has to offer. He is positive and upbeat about his sport and his prospects. Time is running out but it seems as though he may have what it takes to lift himself to the next level of pro cycling.

“The only reason I ride a bike is to race – and to win. That’s my reason for doing it.” 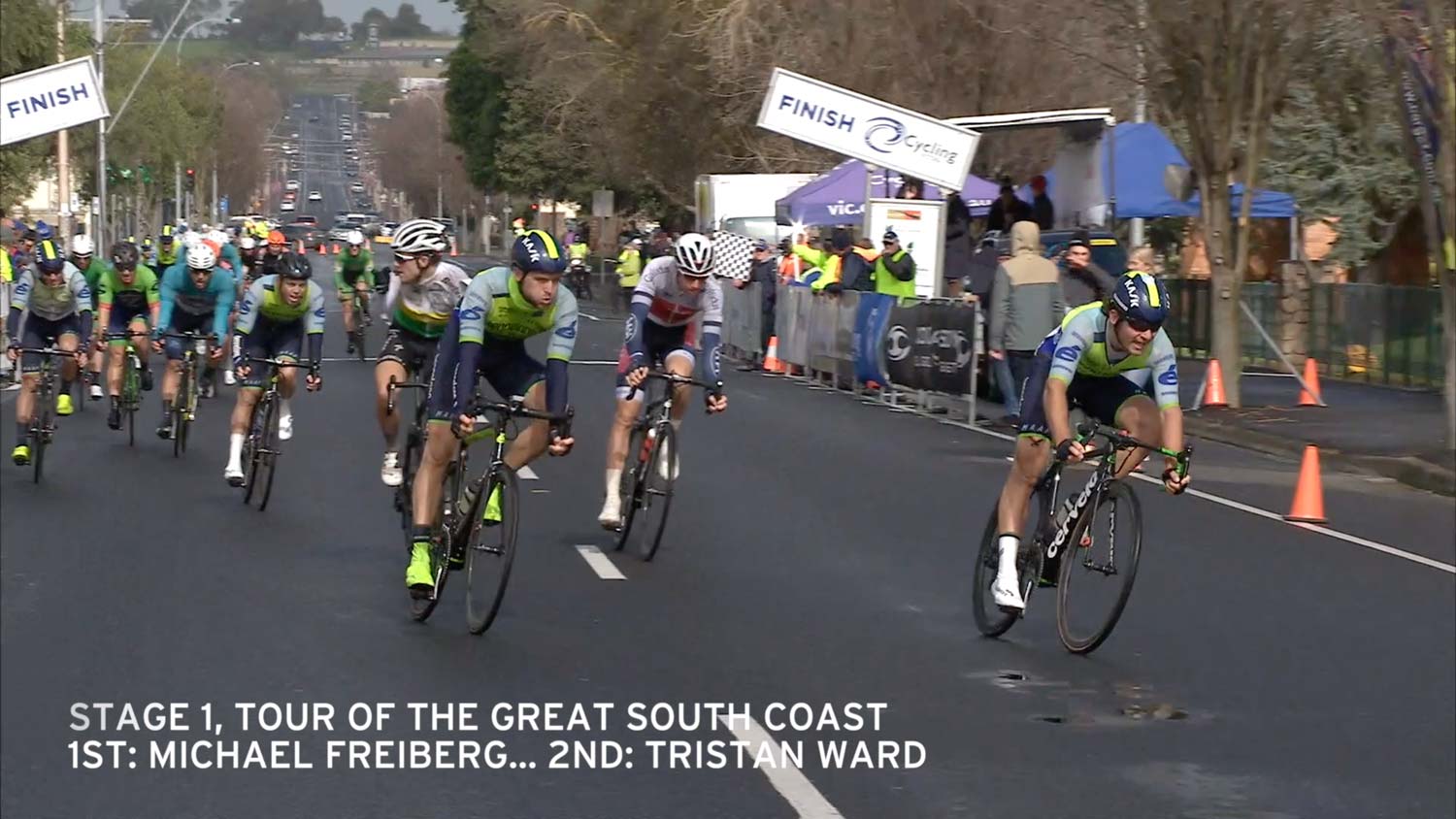 Runner-up as lead-out man (above).

For the moment, it’s his job and his passion, so he’s happy with how things are working out. And so, I wondered, what would he tell a 15-year-old who was considering his sporting options? His reply was as blunt as it was surprising.

“[I’d tell them] to watch the news. You watch anyone from AFL or NRL… and ah, like, just leave the cocaine at home. It’s not that hard.

“I have zero respect for any of them, they’re not athletes.

“If you want to be a proper athlete and really work hard, I reckon it’s worth it. And [cycling] is a lot better than ending up on 60 Minutes on drugs charges or whatnot, being a scummy NRL player.”

Ward is the kind of character cycling needs more of; happy to speak his mind, capable of winning or helping team-mates, and filled with the kind of energy that will encourage others to come to the sport to find out more about it. I hope you enjoy watching the interview.